Day Two of our three-day drive up to Botswana. Over 500 km, a 9-hour journey because of border formalities. It was a day of thornveld … red soils, yellow grasses, wiry thorn shrub, dusty skies. Vryburg, Taung, Mahikeng. We drove through a ramshackle village where arbitrary Stop signs suddenly appeared in the middle of nowhere. “Do you think these came from a Surplus Store?” asked Hirsh. “Someone must have said: Here are some spare signs, put them wherever you want.” In Vryburg, when we filled up our vehicles, the petrol attendant warned Hirsh in lowered tones to lock the doors and stay vigilant at Stop streets as the local guys were bad news in terms of smashing windows and grabbing valuables. Interesting times we live in. 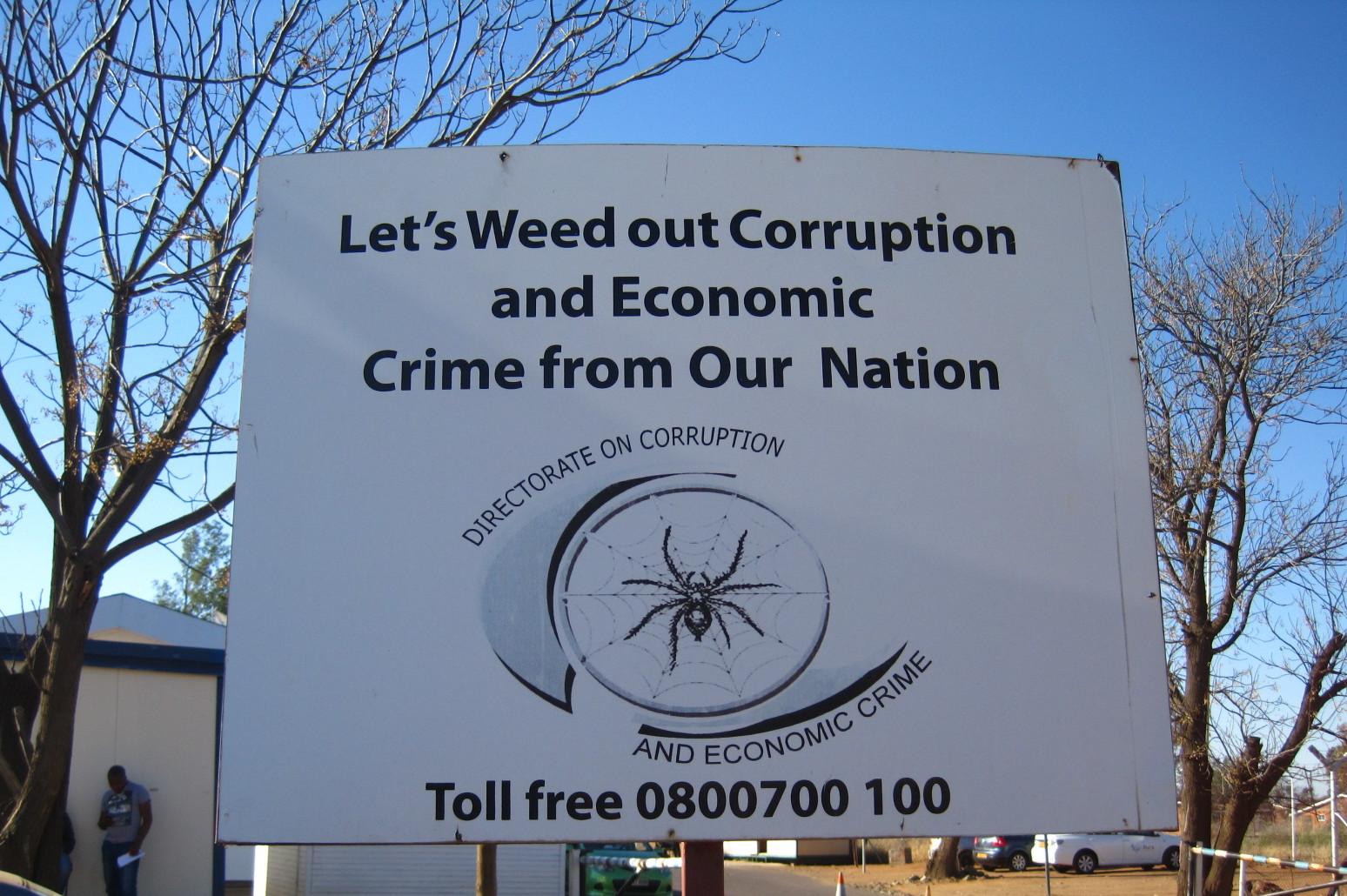 Love the spider in an eye to symbolise corruption. Botswana, we find, is a really well-run country,
with strict traffic and road control and visible, effective policing.

We thought we’d hit the jackpot when we got through Botswana’s Ramatlabama border post in the blink of an eye … until we were sent back to Square One when a security official asked if we’d declared our phones, cameras, laptops — and diamond rings. I wish.  Apparently, a new regulation. So, an hour later, after a tedious roll call of serial numbers we were finally through. Along the way, the police checkpoints were interesting. We came across a Stop sign, tents, parked cars … but no sign of a human being. Then an arm emerged from a parked vehicle; it waved us on. 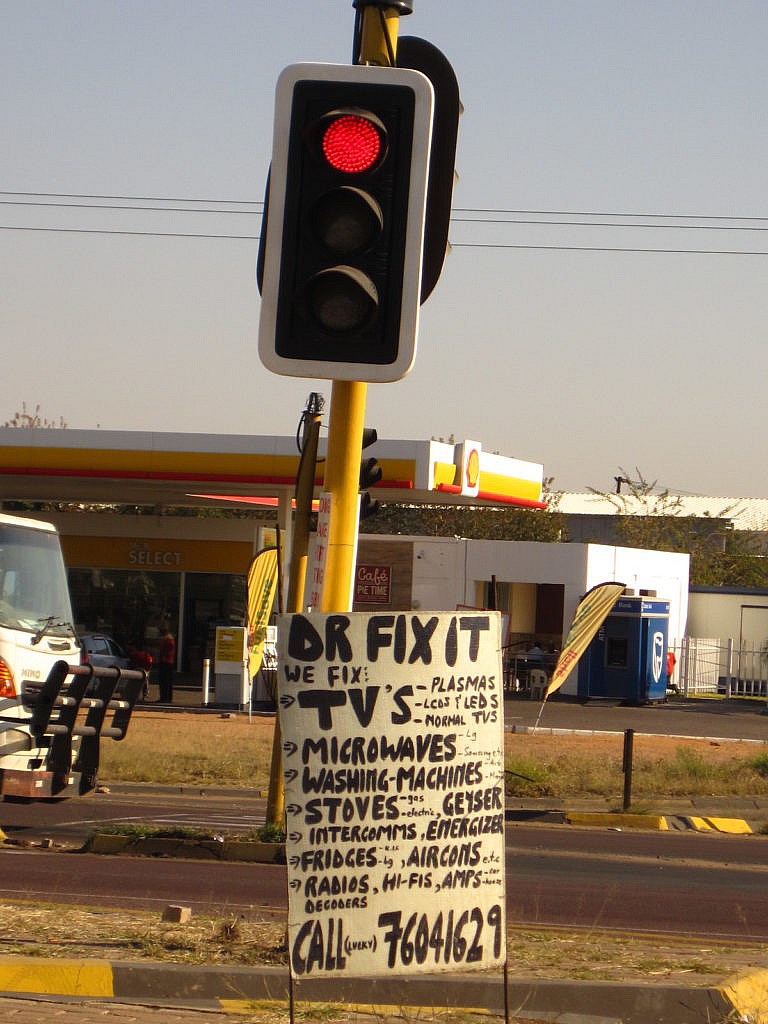 Left A worthwhile number to keep. Wish Dr Fix It was in our neighbourhood.

The driving in Botswana is eye-wateringly eye-opening. Golfs launch themselves from the back of a six-car line-up on the highway, pulling out in the face of oncoming traffic and speeding past until it’s almost too late, then force themselves back into their lane. We even saw a truck doing it with a tanker. Incredulously, vehicles aid and abet them by allowing them in. A couple of crushed burnt-out shells on the roadside are testament to those who pushed their luck a little bit too far.

Mokolodi Nature Reserve, established and managed by an NGO, was a nice contrast to our day … except after another nine-hour day we had to navigate a winding, circuitous route over a bumpy, stony, rutted road fit only for 4x4s to our chalets. It was only 5 km but it felt like 10. Kudu, our chalet, was thatched, built of stone and mortar, and faced onto a waterhole which delivered a single blue wildebeest, an eland, and a grey heron. Theoretically there are white rhino (and giraffe) in the reserve, but you need to stay a bit longer to experience those. Our dinner in Mokolodi’s restaurant — an airy, open-sided, dual-level thatch-and-stone complex — was much fun thanks to our charismatic waiter, in spite of the bumpy circuitous route to and from the restaurant. We got a bit lost on the way home, but made it safely in the end. 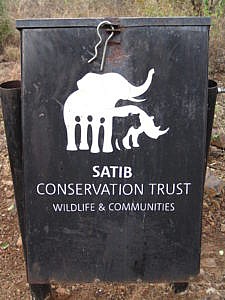 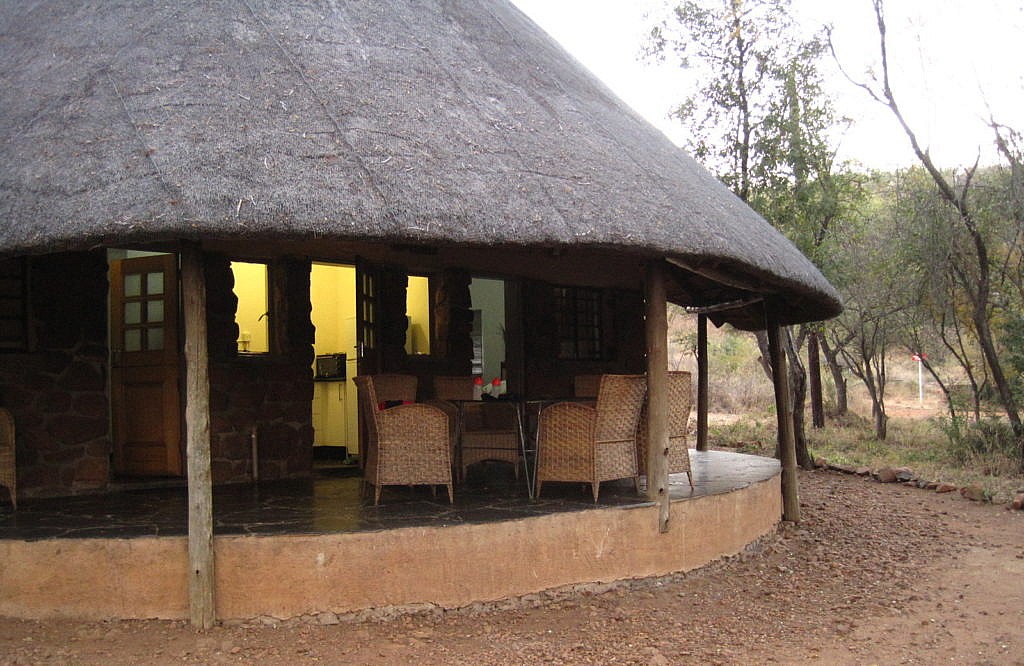