Just when I think I need to venture beyond the familiar to find things exotic, out of nowhere I get a bump on the nose. It’s been taking me a little while to find my feet again after being on the road communing with wild and untamed creatures … 7,400 kilometres later … 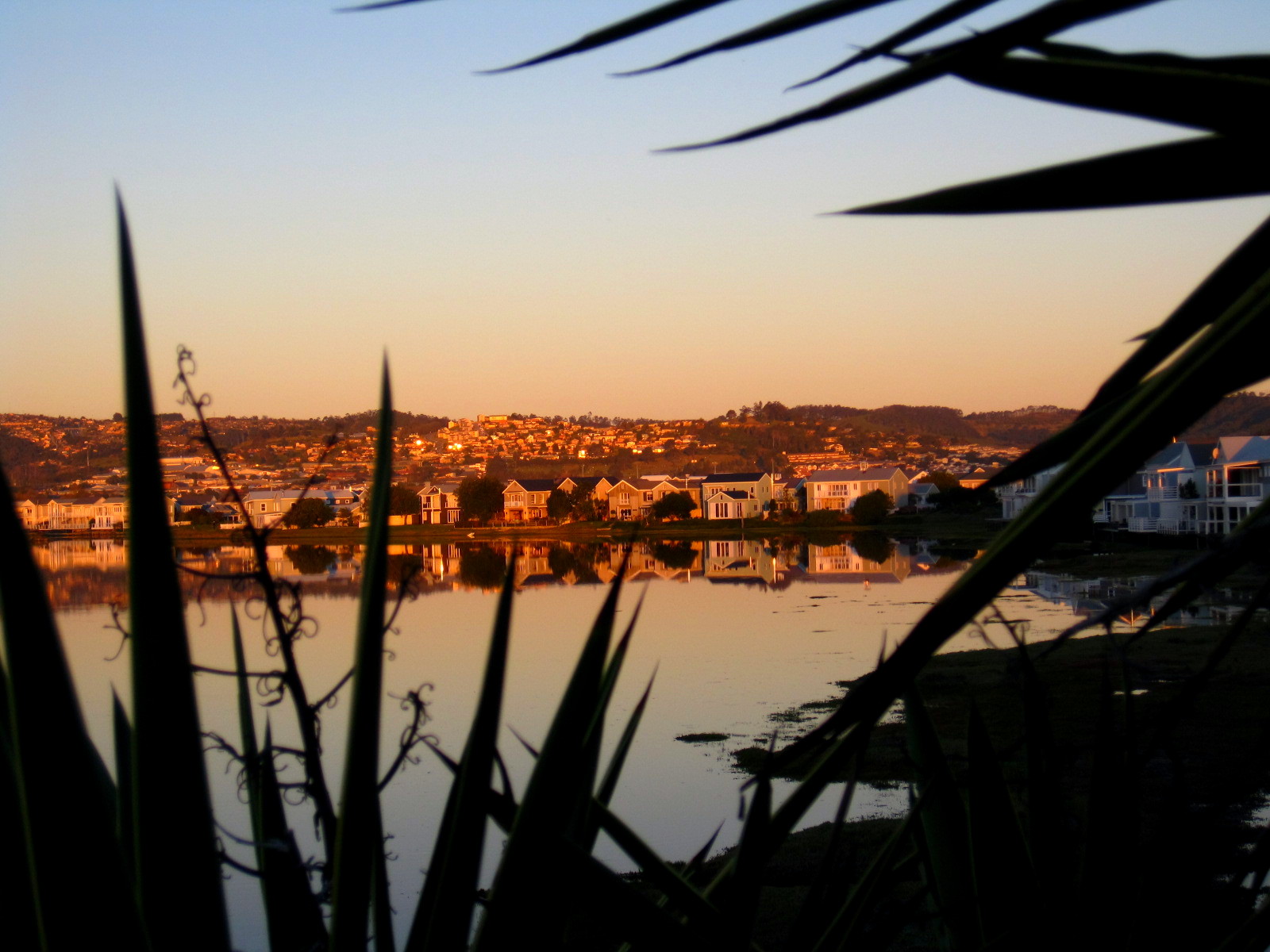 I mean, how hard can it be, coming back to the green wooded hills,
the watery realm of Knysna, and its rising and receding tides?

So … it was on a morning run, the reflecting waters of the lovely Knysna Estuary in my sights, that I got that bump on the nose. There, alongside the road, was a large, weird, pendulous fruit hanging from a spiky-leaved tree. All cross-hatched and knobbly, from where I stood it looked just like a Durian, that slimy (and famously smelly) brownish fleshy fruit of Southeast Asia. I was stunned. It looked so exotic and mysterious and out of place.

I was compelled to investigate. 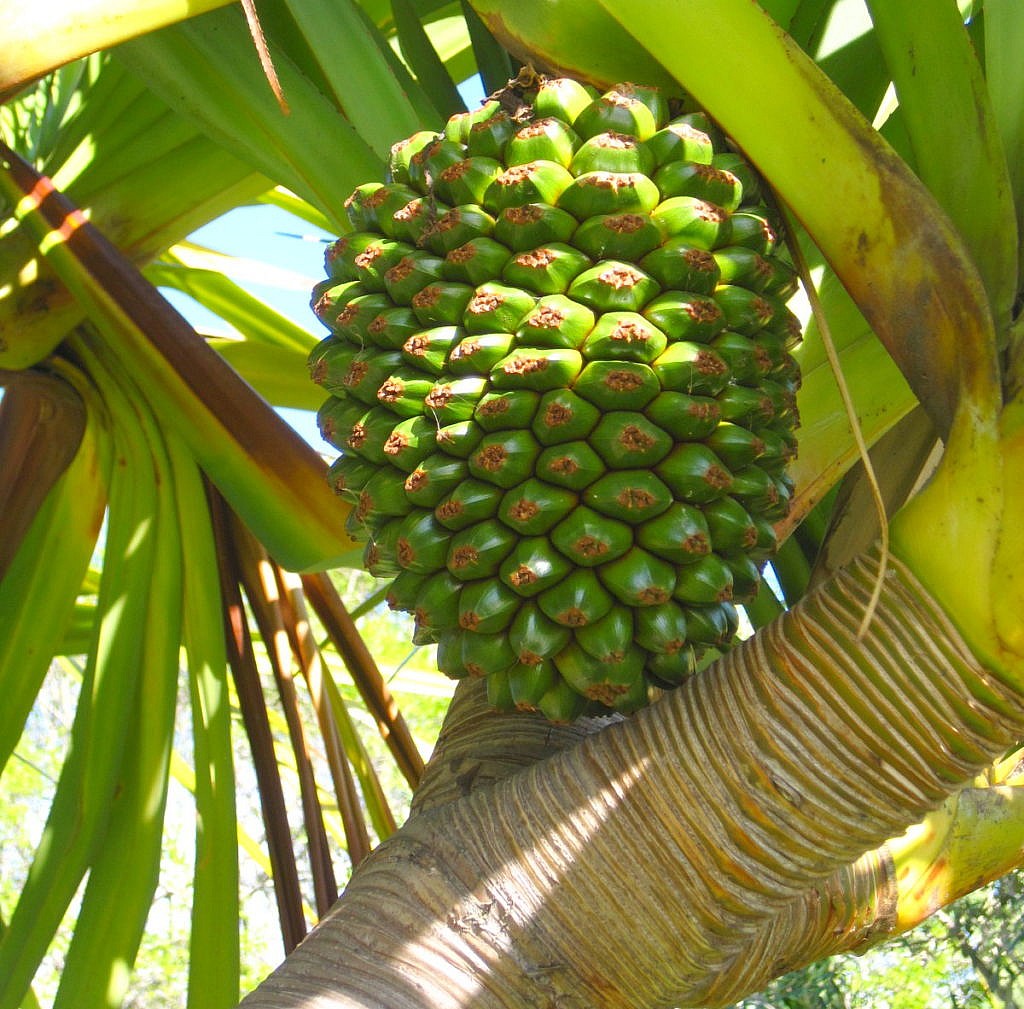 It’s a Pandanus utilis, also known as a screw pine, or a pandanus or screw palm (even though it’s not closely related to palm trees). Pandanus species are common to the Pacific Islands, but have also found their way to the coastlines of the Pacific, Indian and Atlantic Oceans. They are able to withstand drought, strong winds, and salt spray. Perfect for Knysna.

The rings on the trunk are leaf scars. Each “prism” forming the whole fruit is a drupe, meaning it contains a seed. The drupes are edible when cooked, forming a starchy food. This green fruit, which could stay on the tree for over 12 months, will mature to bright orange or red. I wait with bated breath.

Pandanus is a dioecious species. That means trees are male or female, each producing different flowers. Leaves of this plant are used, mainly in Madagascar, Réunion and Mauritius, for thatching and to make ropes, baskets, mats, hats, and nets. 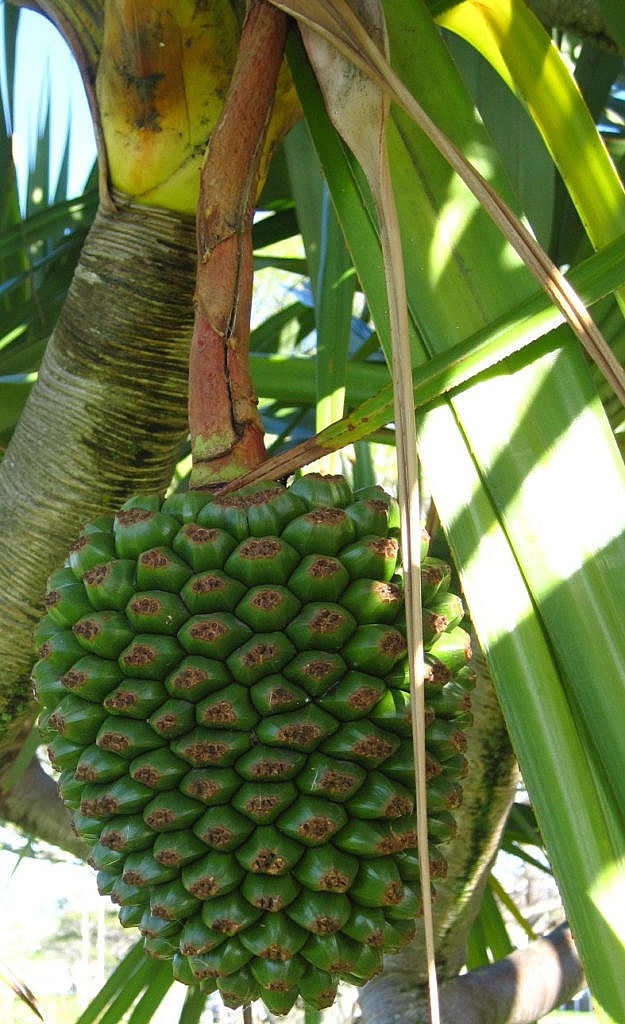 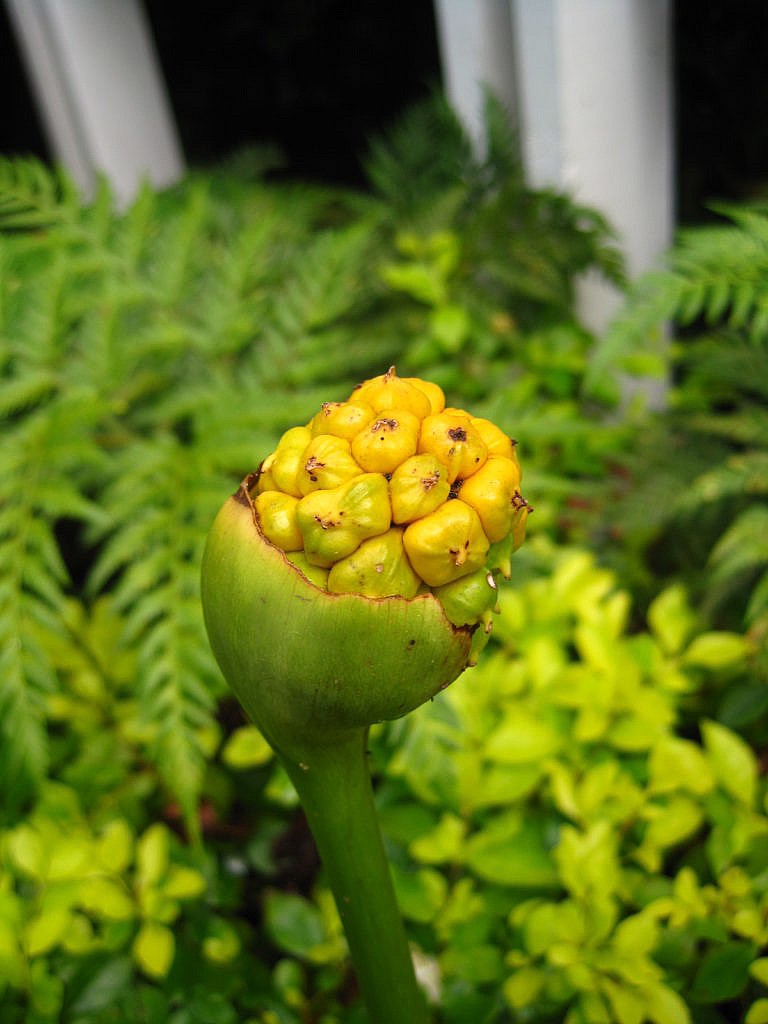 So, now that we’re onto weird and wonderful things botanical, here is another, discovered right in our garden. The above plant, looking just like a mini pineapple, suddenly popped up one season. I’ve searched and searched on the Web but can’t identify it anywhere. It could be part of the Bromeliad family, which the pineapple fruit belongs to (and so do yuccas and some aloes). Or a Eucomis species, whose common name is pineapple lily, but my plant looks nothing like it.

(Hey, if there’s anyone out there who could elucidate me, please do!)

Then, also weird and wonderful and in our garden, is Yucca filamentosa, the common yucca, known too as Adam’s needle (inspired by the sword-like leaves and their sharp tips). It is sometimes called Spanish bayonet. Now, this species is native to the Americas, particularly Mexico. Hmm… not so good having these exotics on our land when South Africa is on such a drive to eradicate alien species . . .

BELOW Flowering cycle of the Yucca filamentosa 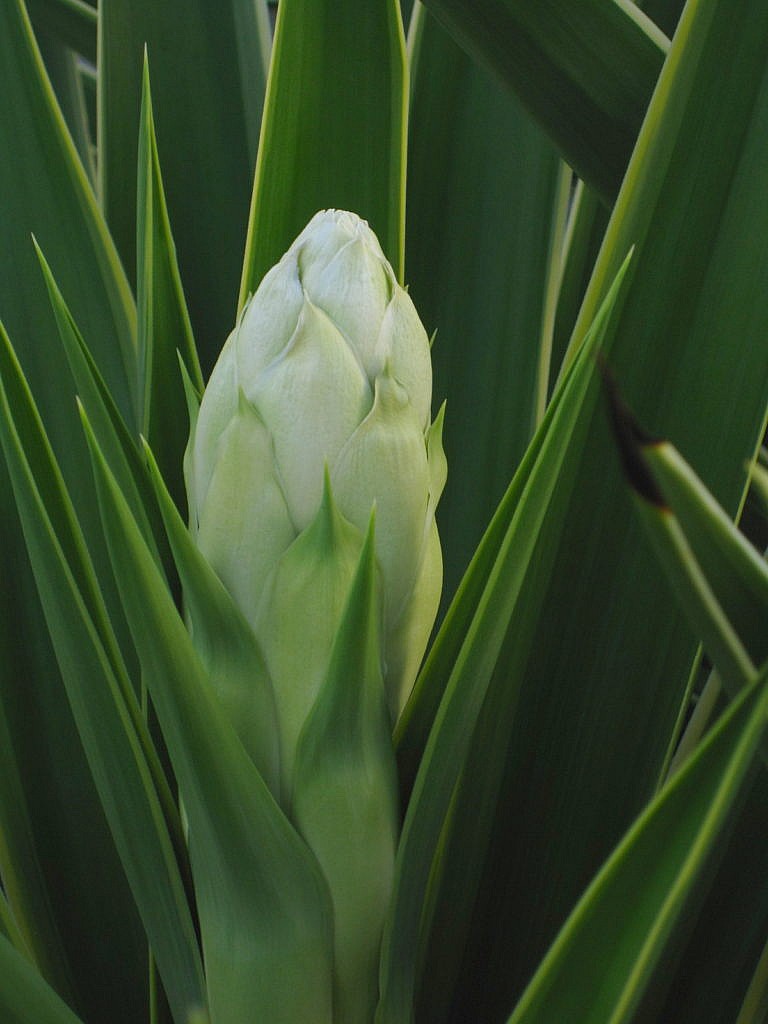 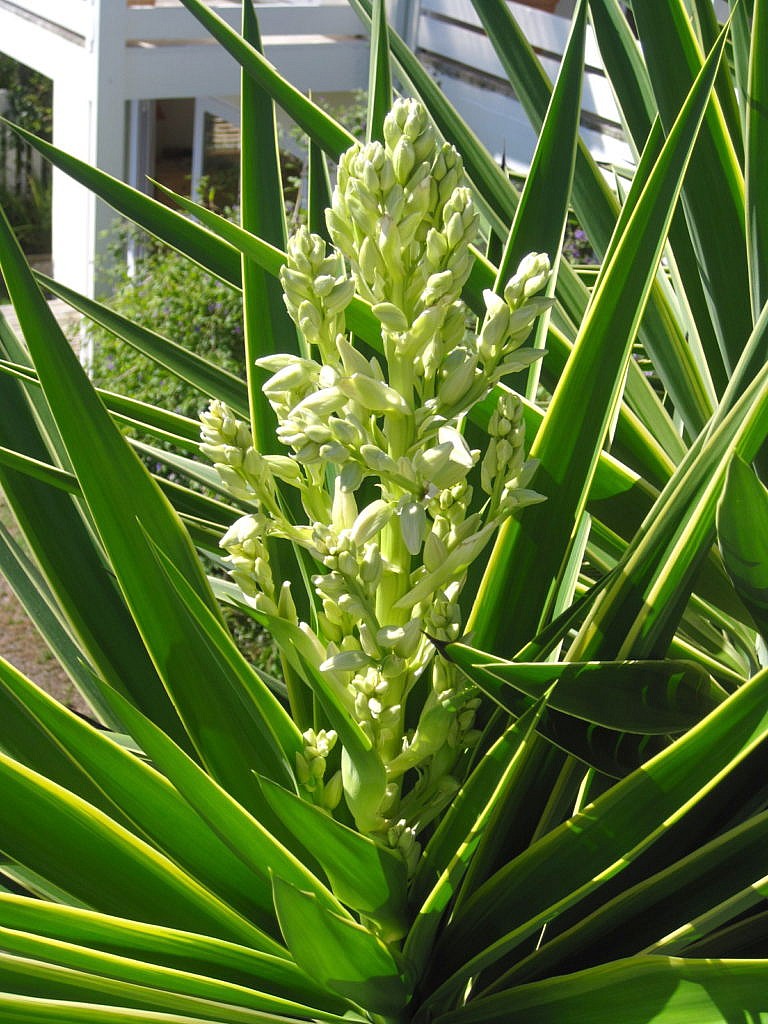 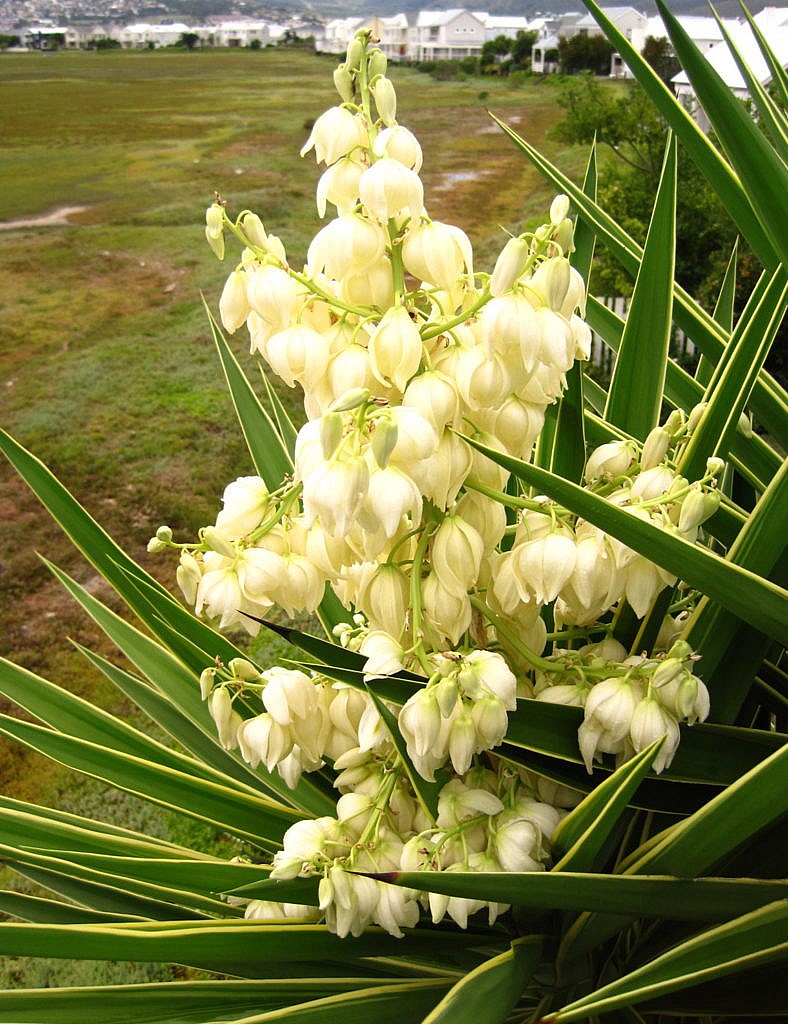 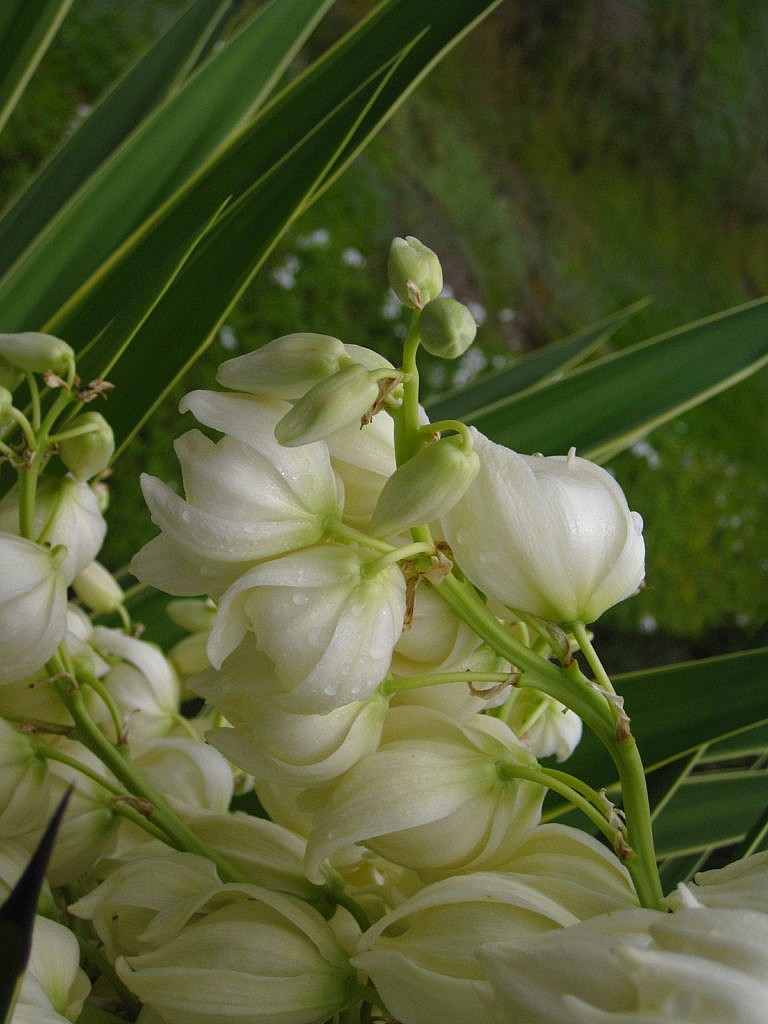 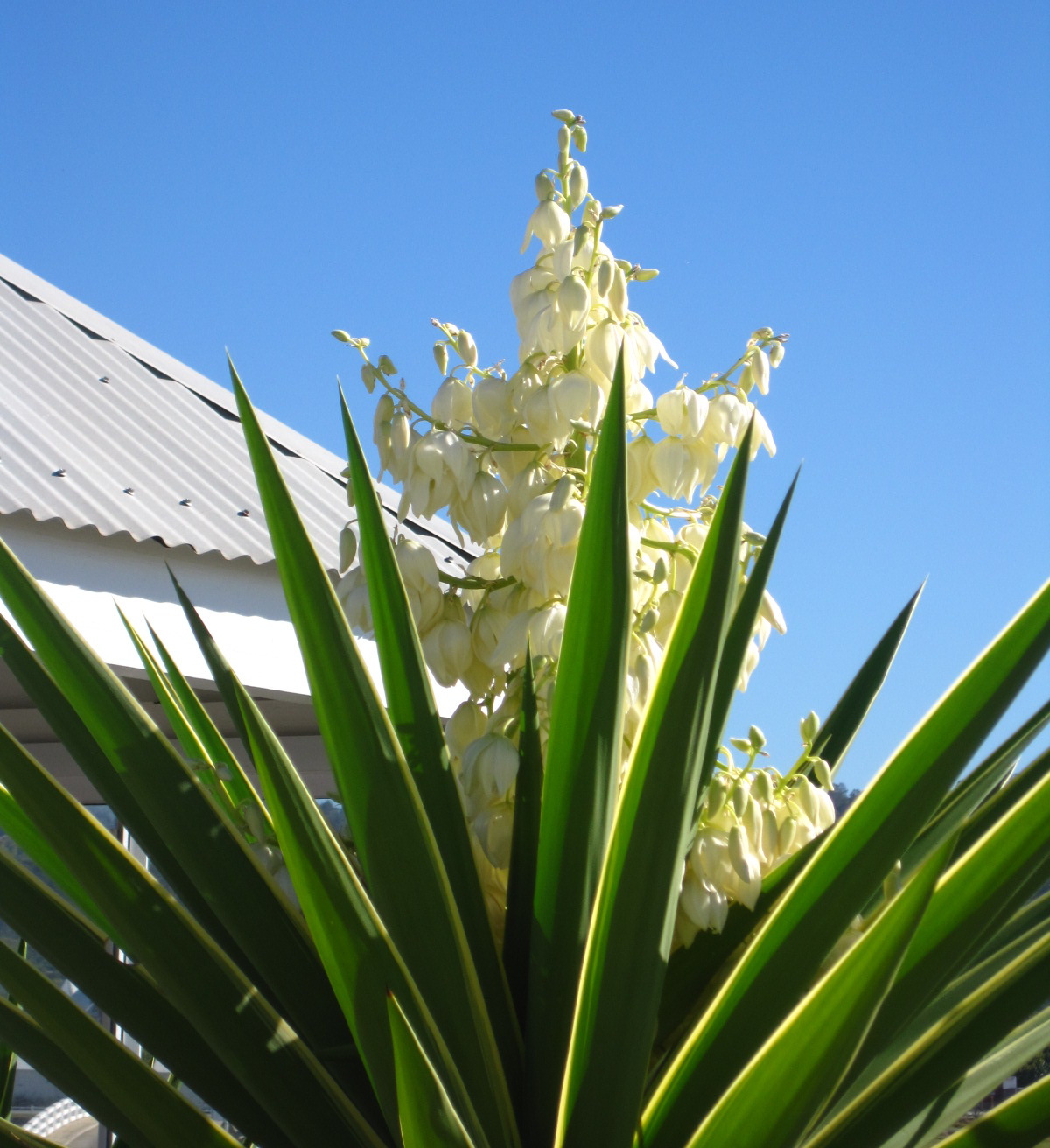 The flowers are rich in oils; the roots, seeds and stems in saponins (these create foam when shaken in water). For centuries yucca potions have been used to soothe wounds, skin, and hair and scalp.

The origin of the word “knysna” is almost certainly a Khoikhoi (or Khoekhoe) term. Experts don’t quite agree, though, on its meaning. One explanation links it to the dense stands of “ferns” in the thickly forested sections. Another says it’s a corruption of two Khoikhoi words “!goa  //na” meaning “straight down”, which is what the cliffs of the Knysna Heads do, at the mouth of the Estuary where it opens to the Indian Ocean.