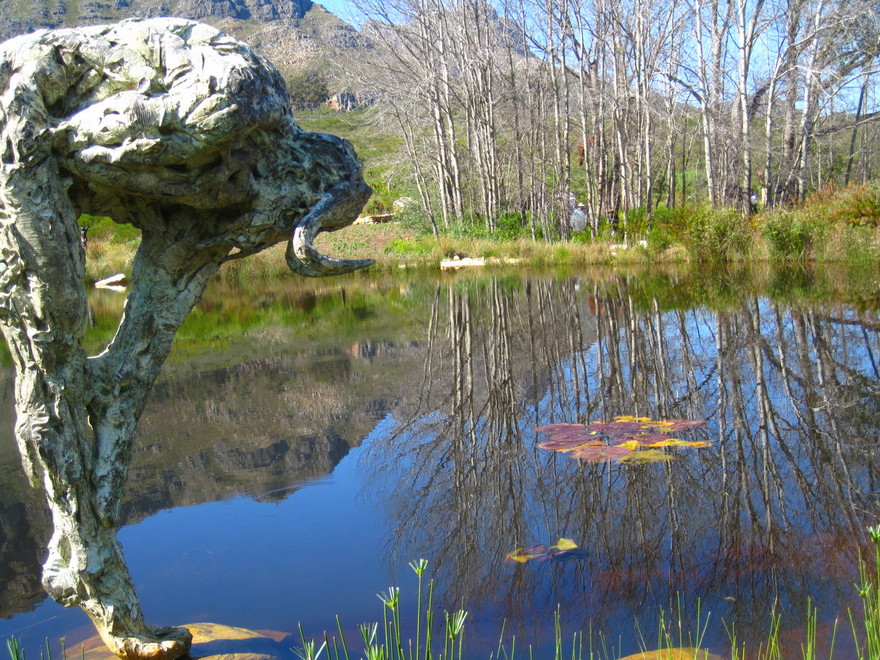 Overwhelming. Awesome. Sensational. World class. These are all words that describe South African sculptor Dylan Lewis’s sculpture garden on Mulberry Farm in Paradyskloof (a very apt name, that!) in Stellenbosch. He started the garden himself way back in 2009, using an excavator to dig and pile up earth and mould it into dips and mounds and hills. And in spite of his artist’s impatience to see it perfected immediately just as he envisioned it, it’s taken years of collaboration with indigenous plant and fynbos experts to get it to how it looks today. Wild and unruly. Tame and controlled. Colourful and bright. Shaded and secretive. And then there are those sensational sculptures. 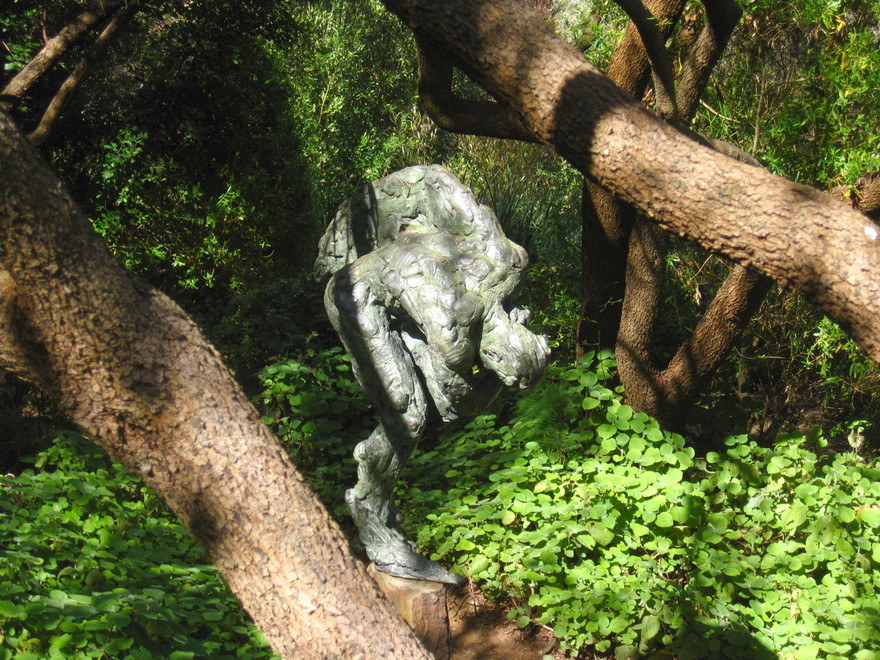 The garden — all of 7 hectares  — sinks and climbs at the foot of the spiky, cracked, grey Stellenbosch mountains. It has a 2-kilometre paved walkway that passes a carefully thought-out and placed series of sculptures, some tiny some giant — there are over 66 of them. The brochure suggests that the walk will take 45 minutes. We took almost two hours in blazing 36-degree heat. They do provide charming paper Eastern-style umbrellas, though, and trays of iced cucumber and mint-infused water. An inspired offering. 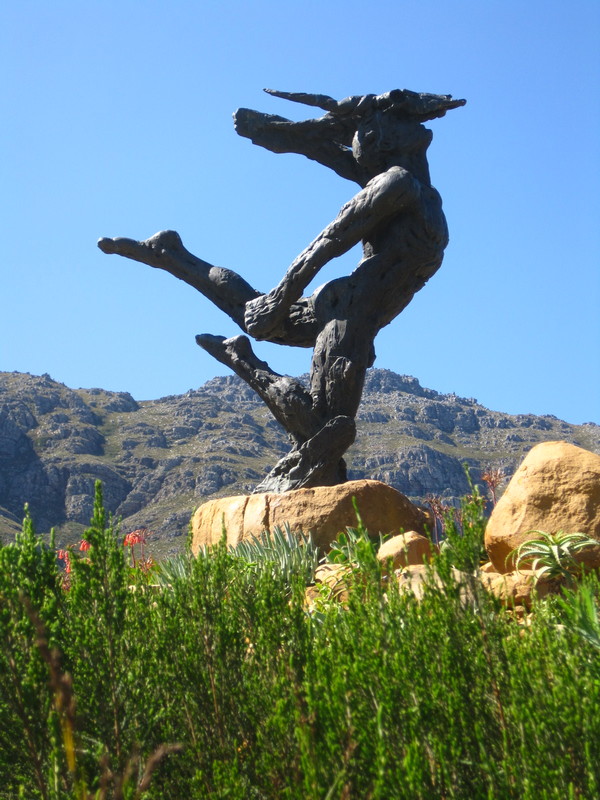 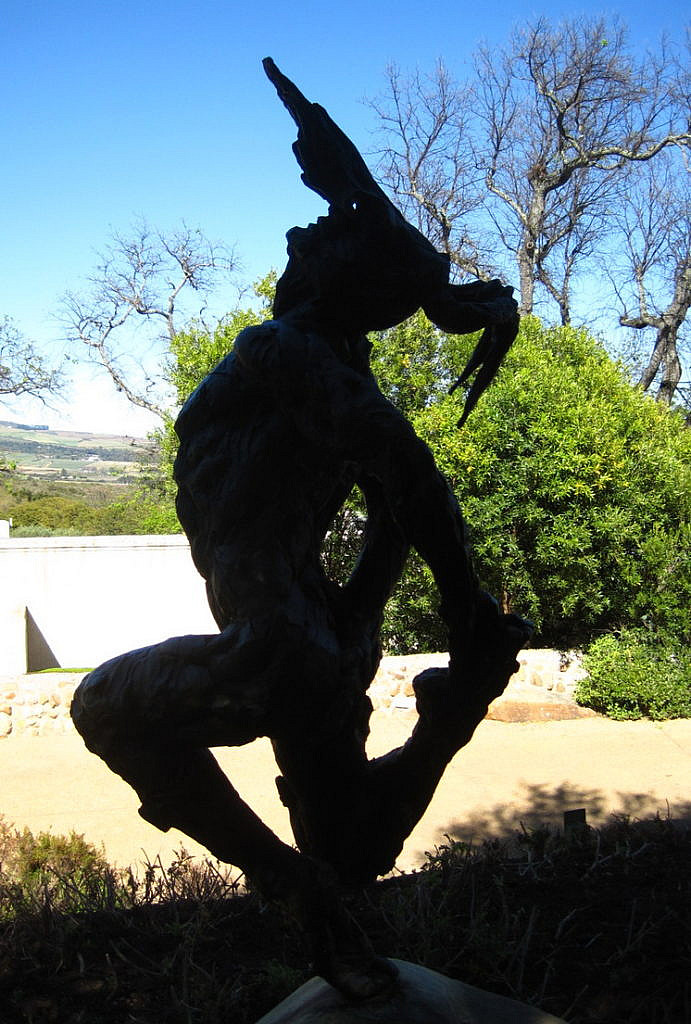 Through the raw sensuality and visceral primal emotion expressed in his animal torsos and tortured half-human half-beast figures, it’s fascinating to follow Dylan Lewis’s personal transition. From a restrictive fundamentalist religious upbringing, he achieved emotional release through the animalistic raw power of his cats, then progressed to horned and masked male figures, as well as ‘shamanic’ female figures (with wings and claws), all of which half-conceal the wild self, and finally as he learns to accept the animalistic and the tame within himself, his purely female and male forms. 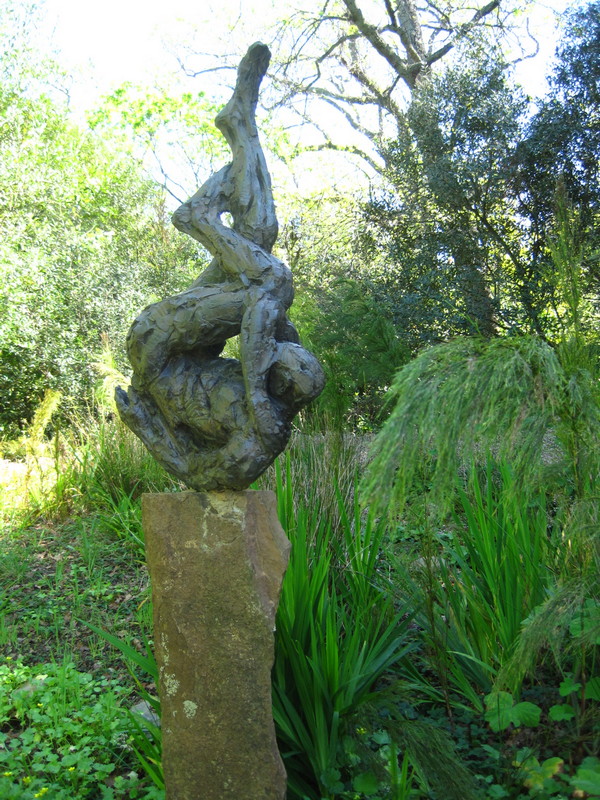 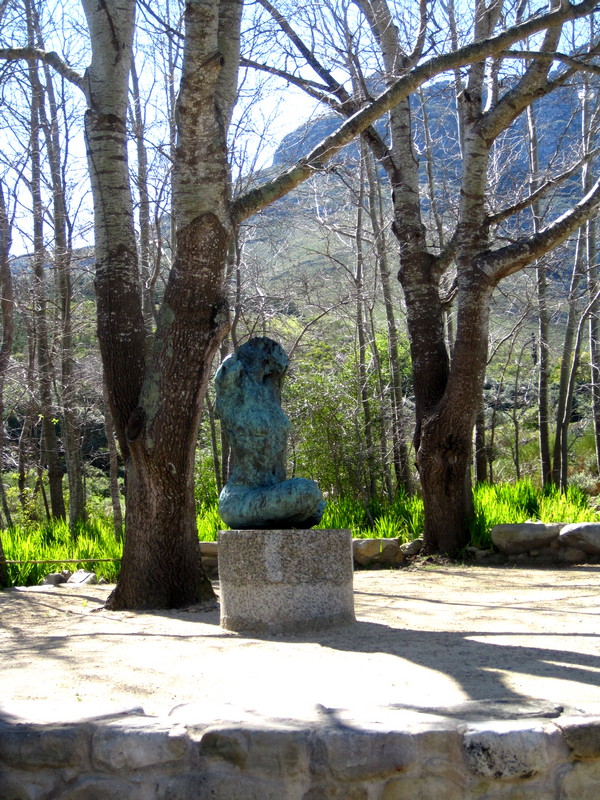 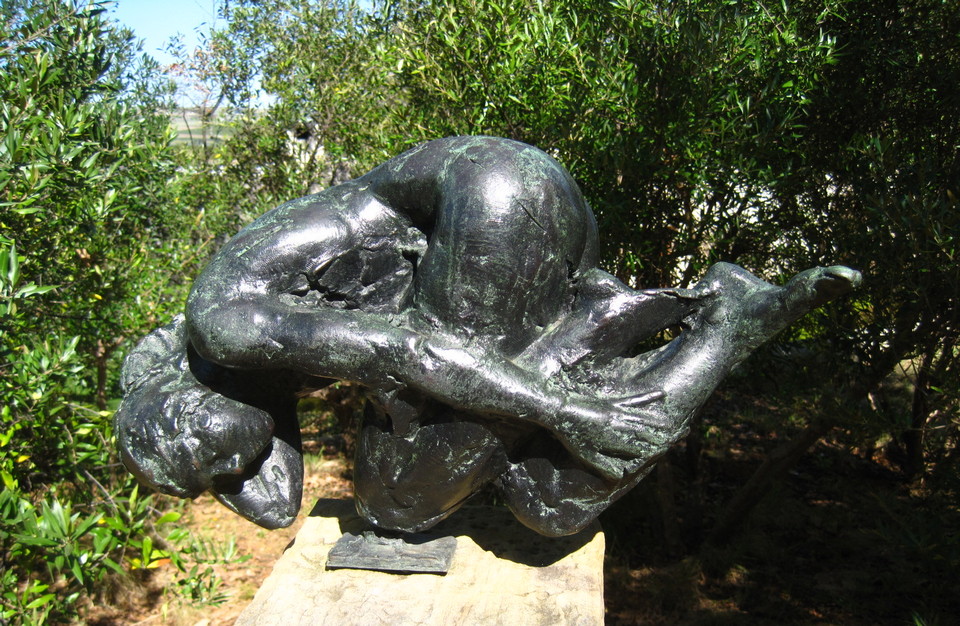 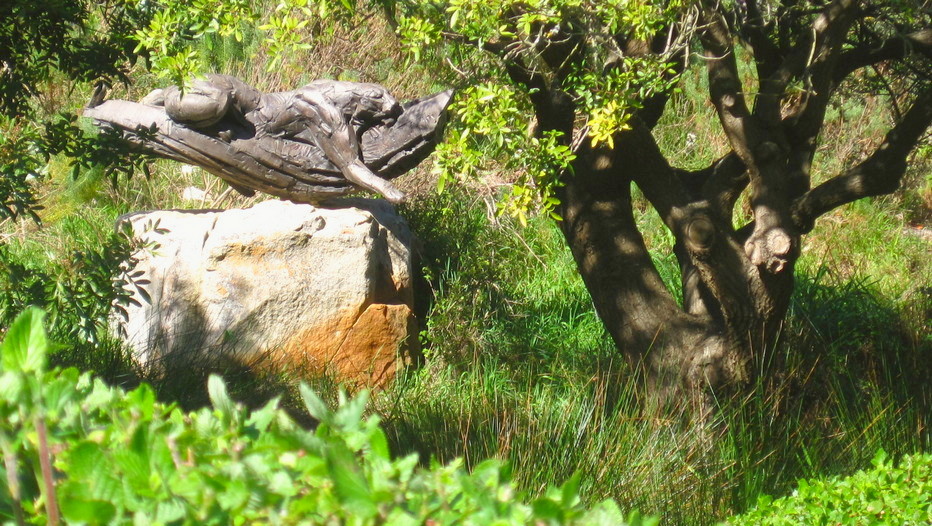 Dylan works in bronze (from clay sculptures which are then cast using a ‘lost wax’ method) as well as acrylic plaster embedded with black or iron oxide (below). 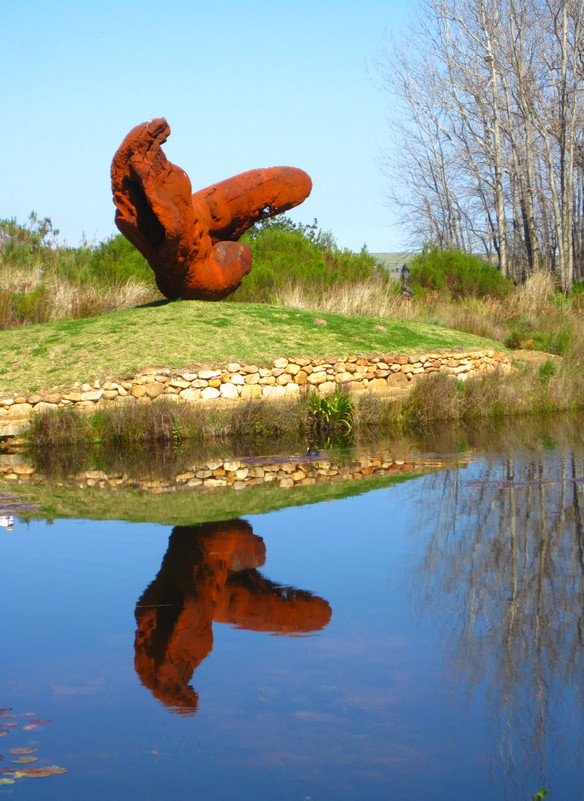 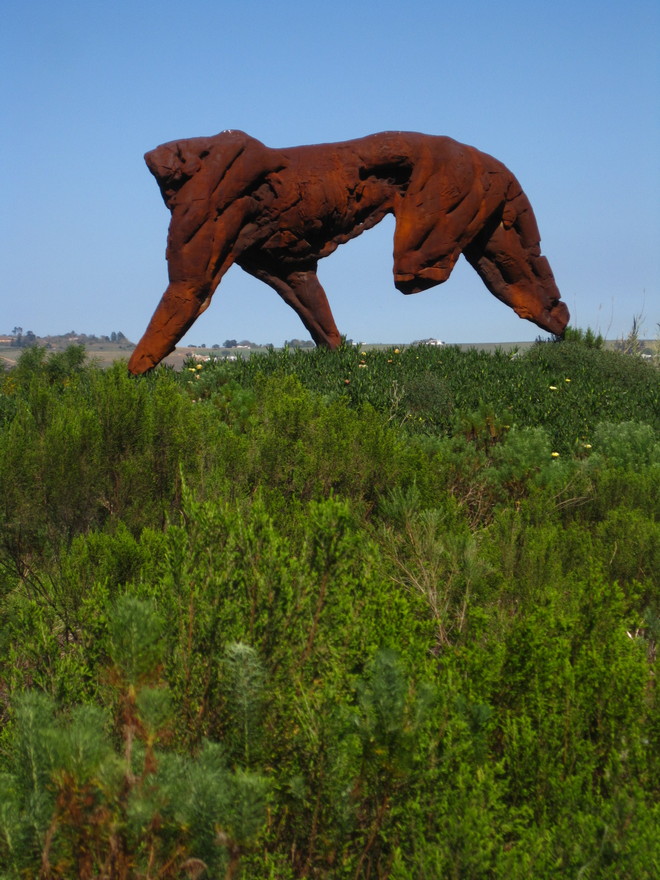 The leopard became Dylan’s totem animal (he even dissected lion and leopard carcasses to understand their anatomy and to help him truly express their movement and power). The fragmented leopard torso above right (among others) is a symbol of the disintegration of the artist’s restrictive belief systems. 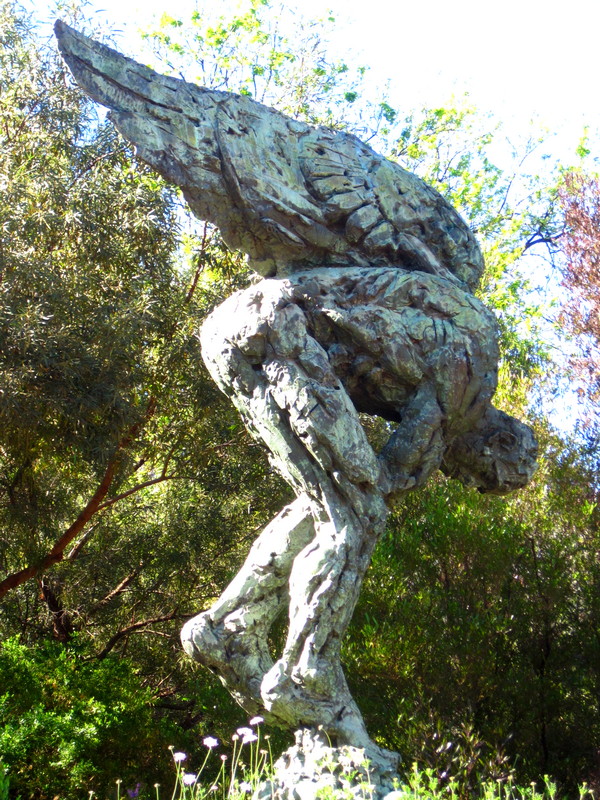 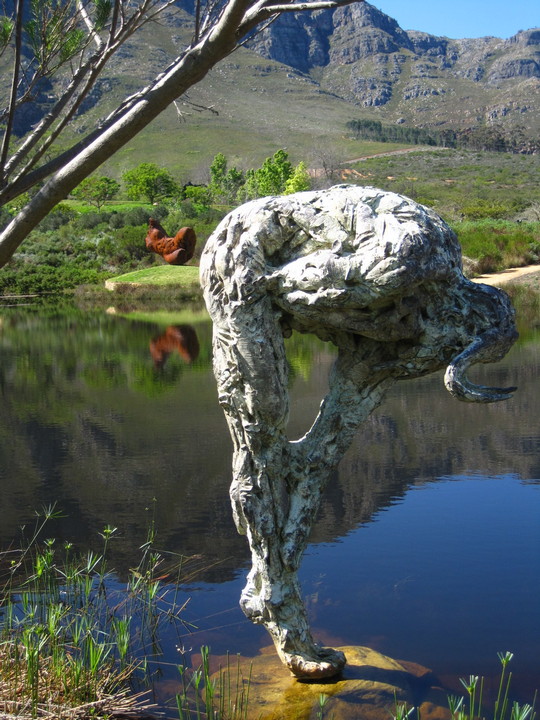 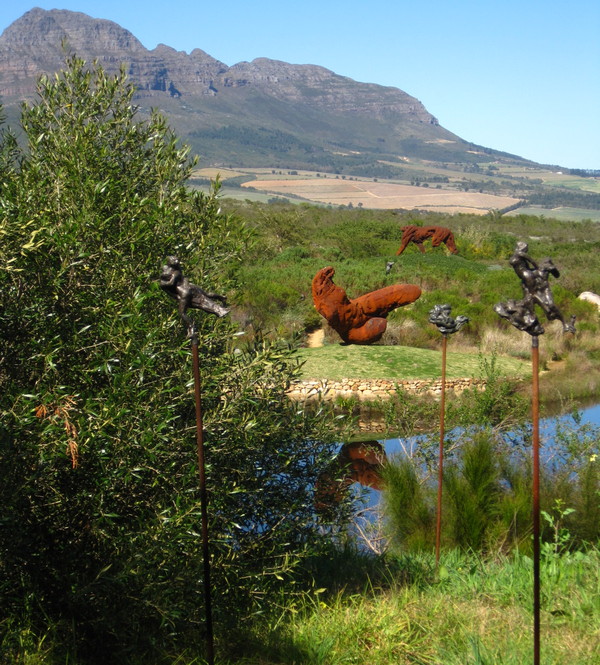 These tiny male and female figures on posts have become Dylan Lewis’s new project, which is to focus purely on the human form and the creative life force — the interaction between masculine and feminine primal energies. 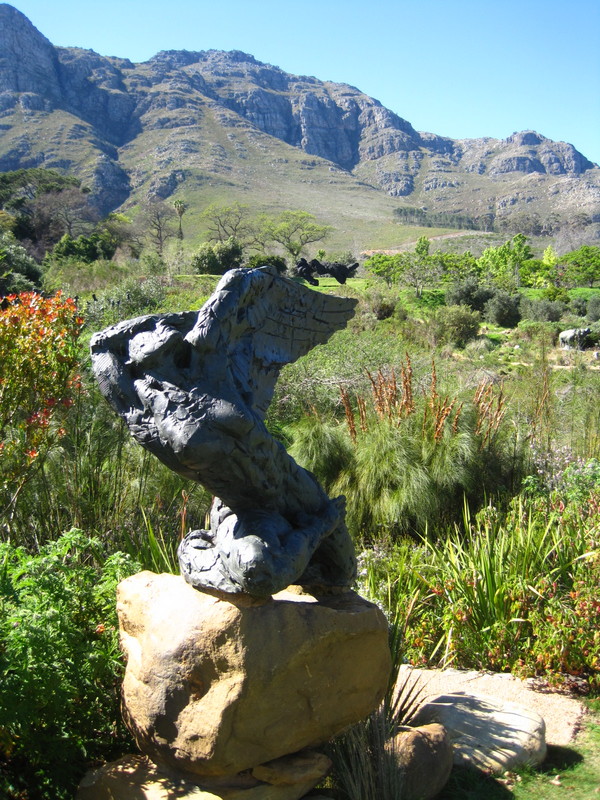 I end with this poem that stands in the garden and to me embodies the energies in Dylan Lewis’s work.

And he was the demon of my dreams, the handsomest of all angels.
His victorious eyes blazed like steel, and the bloody flames from his torch illuminated the deep crypt of my soul.

‘Will you come with me?’ ‘No, never! Tombs and the dead horrify me.’
But his iron hand took mine.

‘You will come with me.’ And in my dream I went forward blinded by his red torch.
And in the dungeon I heard chains and the rumbling of caged beasts.’