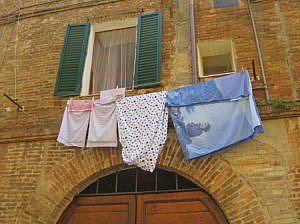 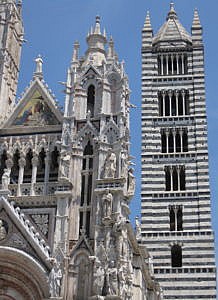 Before a drive to Siena, a skip, hop and jump from where our apartment is, a mandatory run in the countryside … testing our bursting lungs (the altitude!) and burning legs (those relentless hills!) but the scenery is priceless. Green-gold wheatfields, serried cypresses commanding the skyline, rough honey-stone buildings with crusty clay roof tiles, beetle-size Fiats threatening to mow us down as they fly round blind corners.

Statue of the wolf: It’s a very complicated Etruscan/Roman story taking place in the 8th century BCE, but the twins Romulus and Remus (Romulus founded Rome; Remus’s son, Senius, established Siena) were ordered by a king to be thrown into the Tiber River. A kind-hearted servant instead hid the twins in a basket and placed it in a river. After it caught in the roots of a fig tree, it was discovered by a female wolf who suckled them till the twins were eventually cared for by a shepherd and his wife. Hence the many Italian statues, always with a wolf as the main focus. 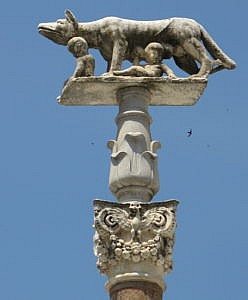 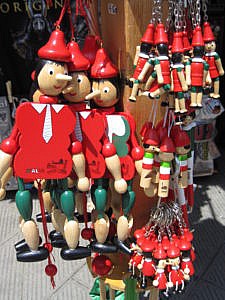 Lovely to revisit Siena, and … what did we expect? … lots and lots of people. Columns of Asian tourists performing star jumps for the camera’s eye, lanky Dutch couples towing kids in strollers, strong-boned Germans toting expensive cameras, group after group (it was a Sunday after all!) of schoolkids, the boys displaying like peacocks, radiating testosterone and show-off boisterous laughter,  and a couple of South Africans … us … trying hard not to look like tourists.

Pinocchio puppets: The story-book character Pinocchio was created in 1883 by a Carlo Collodi, born in Florence but he grew up in Tuscany. Collodi is actually the name of a Tuscan town, Carlo’s mother’s birthplace, but Carlo decided to change his last name to honour the region he so loved. Which is why Pinocchio puppets are strung up everywhere you look in Tuscany. 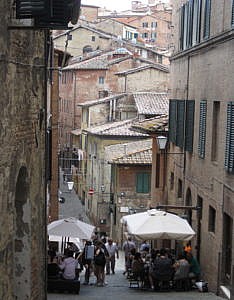 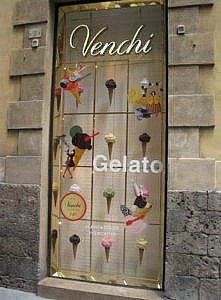 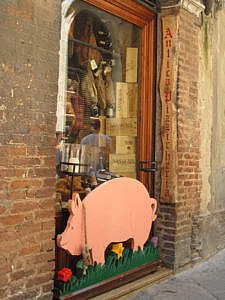 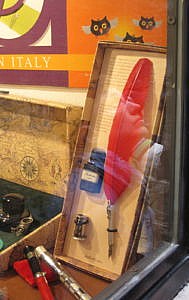 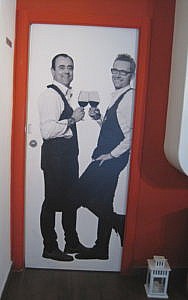 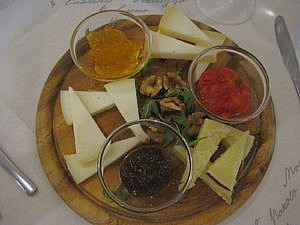 Actually, the black-and-white poster of the two guys above is a sliding door to the bathrooms at a really funky restaurant we had lunch at in Siena, Osteria Del Gusto. Directly above is my platter of different Pecorino cheeses and “mustards” — in fact, preserves. But quite delish. 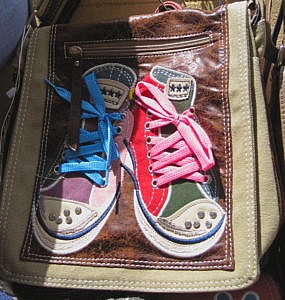