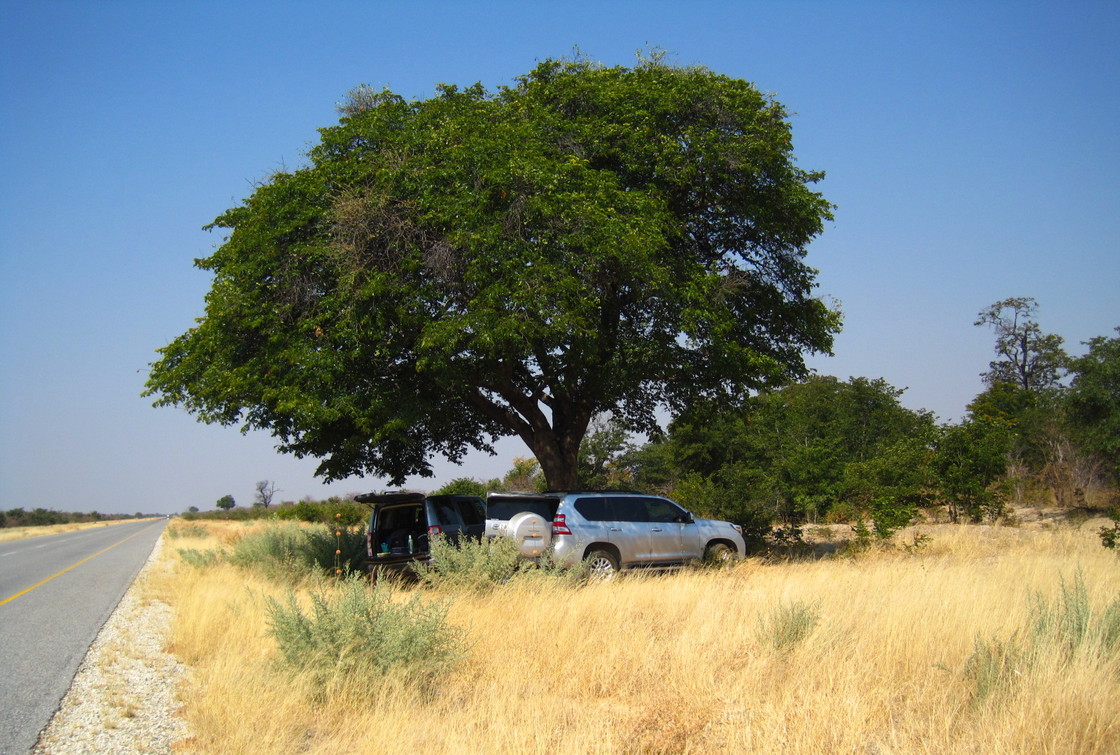 Coffee break in a continuous landscape of grassland and woodlands

Day three, 2,000 kilometres down. From First World sophistication to vast, desolate, crusty salty flats in a day. We’re getting there. To begin with, we were all a bit gobsmacked at the modernity of Gaborone. The architecture is all glass and colour-blocks and sophisticated clean lines; a functional city, decidedly clean and trash-free, with upgraded road systems and traffic cops who are respected and obeyed using nothing more than a whistle in the face of a relentless stream of traffic pouring in from every direction. The city is filled with upmarket malls and centres with friendly smiling staff delivering excellent service. This clearly is an affluent society … it brings you up short to see what can be achieved in the absence of corruption. South Africa, you have a lot of growing up to do.

The trash-free environment? Not so much as you fly up the A1 highway, straight as a rule, northeast from Gaborone to Francistown through nothing but unbroken acacia thornveld. You could identify each lay-by a kilometre in advance from the litter strung out along the fences. Dustbins were always overturned or simply abandoned. Clearly municipal cleaning staff don’t have the GPS coordinates punched into their phones for these zones.

We drove by donkey carts and their passengers, (lots of) burnt-out shells of trucks, women sitting in umbrella-ed rows at the roadside selling dried mopane worms out of huge basins. Although there is a plentiful supply of bundles of wood for sale, it’s refreshing to see Botswana isn’t (yet) suffering the decimation of its dense acacia and Brachystegia woodlands in the way Zambia and Zimbabwe are. Then we crossed the Tropic of Capricorn, marked by a metal world globe and a cluster of dusty red stone pillars of varying heights. The rousing rock music on our iPod and Hirsh’s humour (Keith’s, too, over the Zartek radios) kept us awake. Every time I started musing on Botswana’s infrastructure and its industries, Hirsh would have a cogent answer for me. “You have such a deep store of general knowledge,” I mused. “All I know is my birds and trees and flowers while I live in my Cloud Cuckooland.”

“But I thought that’s all part of knowing your birds,” he flashed back.

The last couple of hours were about hitting tar potholes at speed. Well, actually, trying NOT to. It didn’t always work. Periodically Keith’s Toyota would get swallowed up in a puff of dust. Then we knew he’d hit a particularly gnarly hole. Trying to pass thundering trucks was also a hazard as they’d suddenly swing out to avoid a pit themselves. Mercifully, tyres remained intact. 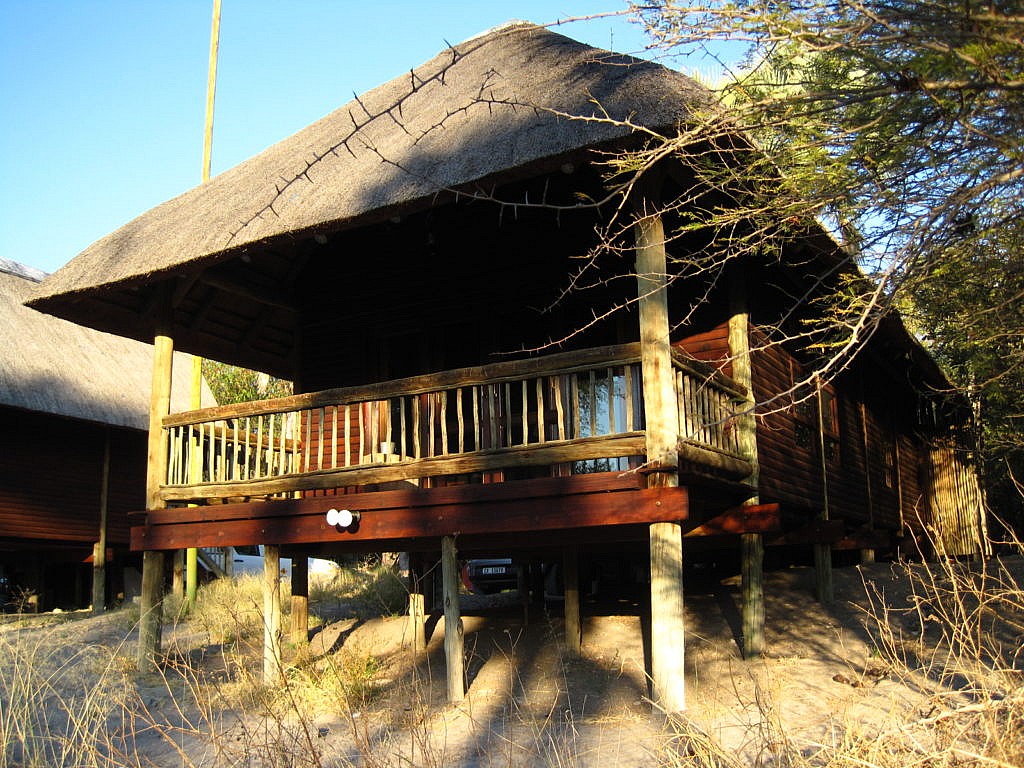 Nata Lodge was heaven after a seven-hour trip. I was convinced the word “nata” was a guineafowl in Tswana as the image appeared everywhere — as a logo cut out in the thatch, on towels, on stationery, in the form of statues and sculptures. But, no, it actually means “shock” or “utter surprise” in the San language. This was the response, apparently, of the San after they’d migrated across the Kalahari Desert and first encountered the massively flowing Nata River. They’d never seen anything quite like it. 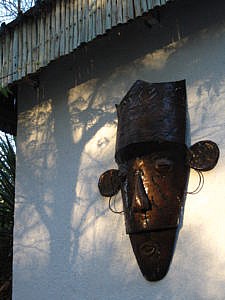 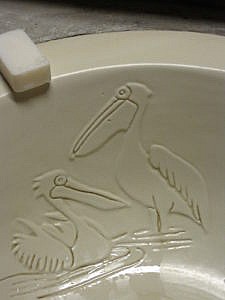 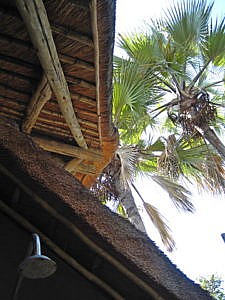 Centre The pelican relief was inset into our basin; right Our divine outdoor shower. 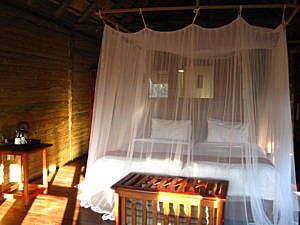 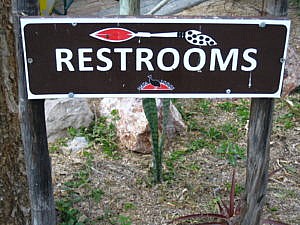 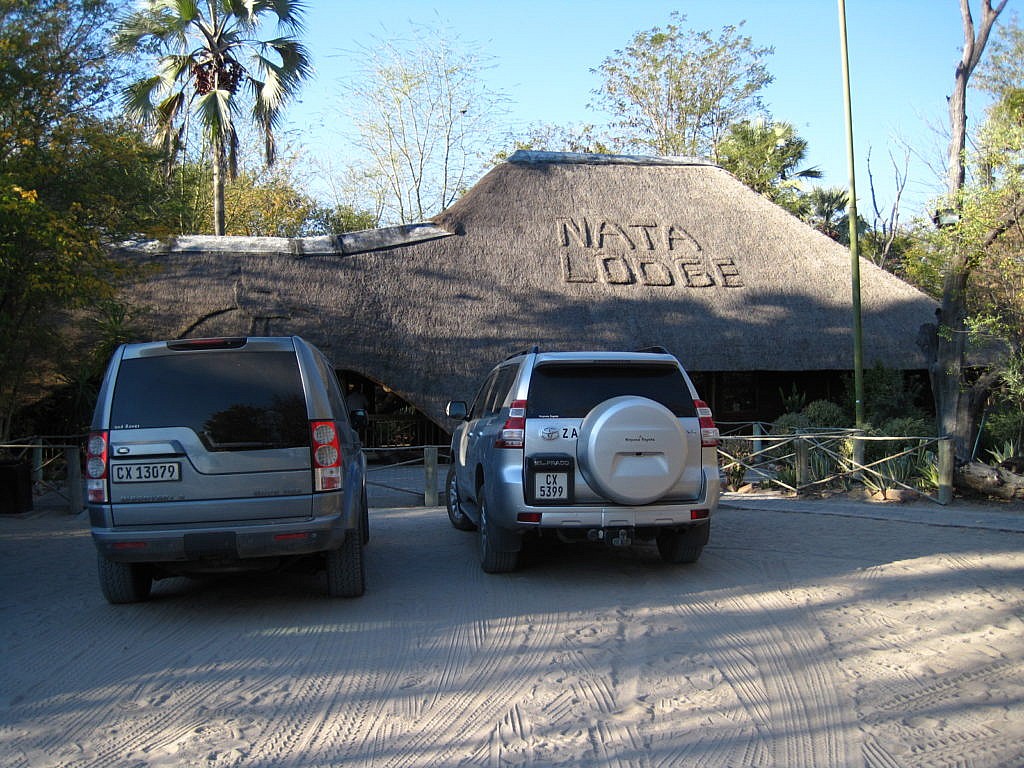 A 6:30 am start (shock, horror!), all bundled up in beanies, gloves, scarves to withstand the cold winter air on the back of the open safari jeep, had us heading for the Makgadikgadi Pans with our guide Pako (“Call me P.K.”). We liked Pako. Crossing lustrous grasslands whose species names sounded a bit like the Seven Dwarves … Spiky, Silky, and, more prosaically, Buffalo … we were greeted by a blood-red orb of a sun. We were thrilled when a pair of black-backed jackals bobbed by, there were Burchell’s zebra (the national symbol of Botswana and introduced by Botswana’s first president) and blue wildebeest (a remnant population of annual migrations from the north until Botswana erected its fences to ward off foot and mouth disease). 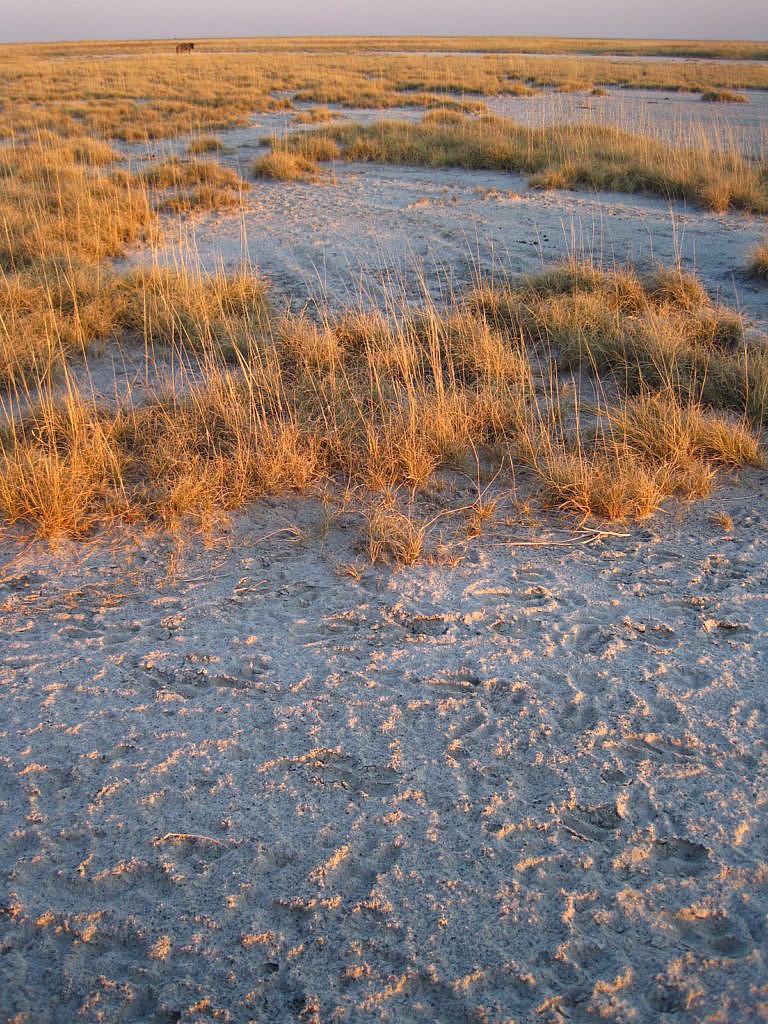 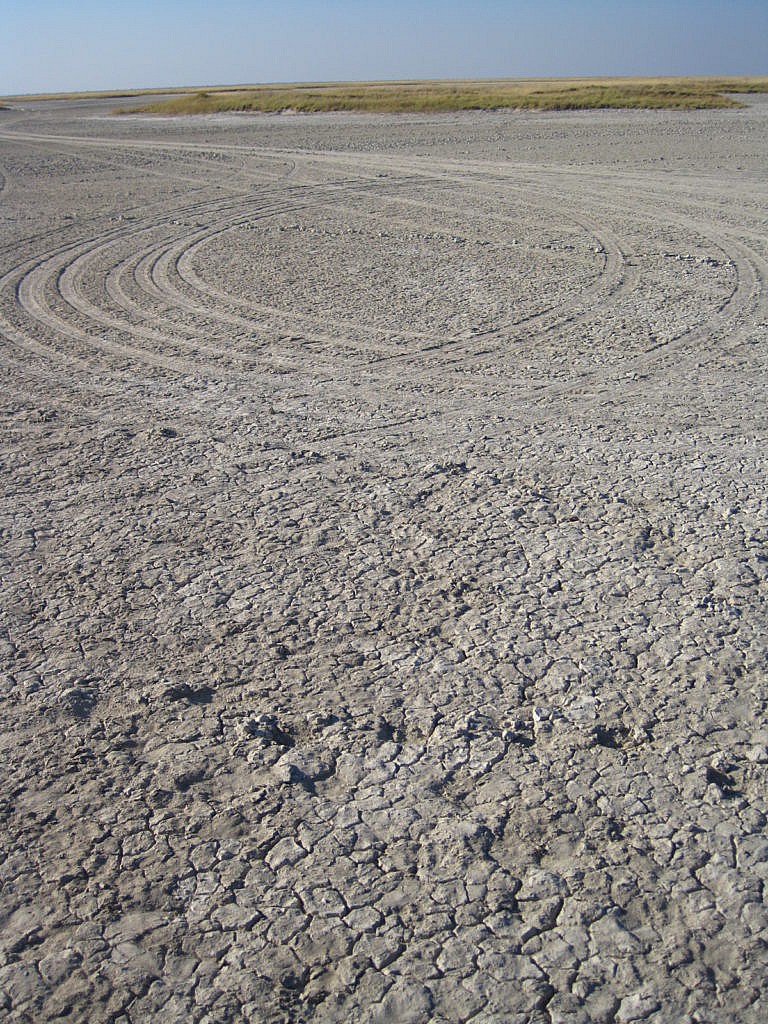 After passing crusty dry patches of salt pans in between the grasses, our jaws dropped when Pako stopped the jeep at the edge of an enormous body of water — 18 km x 14 km in size, to be exact. Sowa Pan! We’d fully expected great white swathes of salt-gravel flatness stretching to every horizon. The greater Makgadikgadi Pans area measures 37,000 km². Apparently rains have been so abundant that the pans are still unseasonally filled with water, an unusual occurrence. I was a little disappointed as I wanted the experience of trekking across the salt. But that was still to come. Through our binoculars a solid pink stripe across the water materialised into a breeding colony of Lesser Flamingos, who’d migrated from Walvis Bay. There were dainty (and quite pretty) Grey-headed Seagulls, Red-knobbed Coots and Pied Avocets. 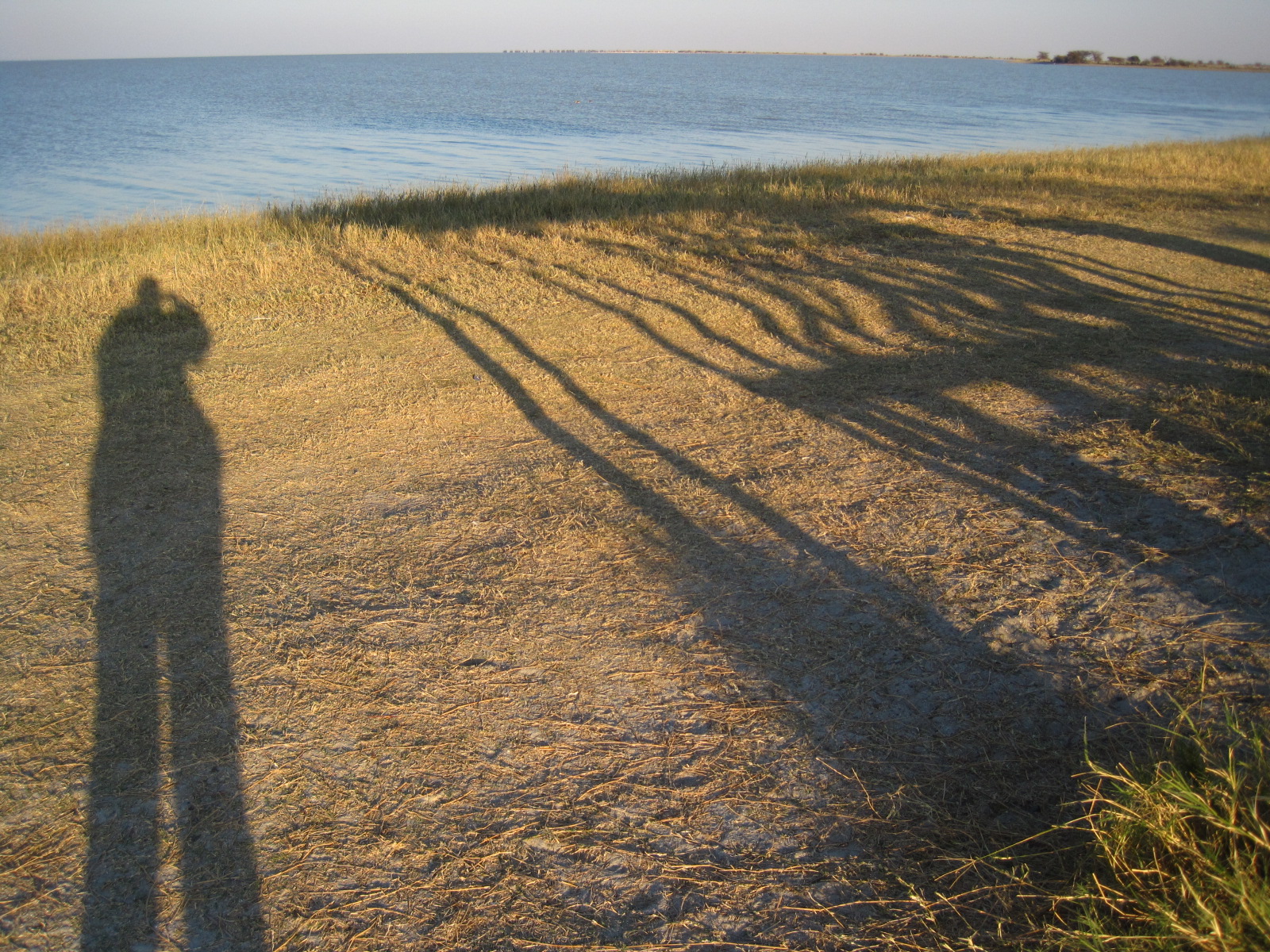 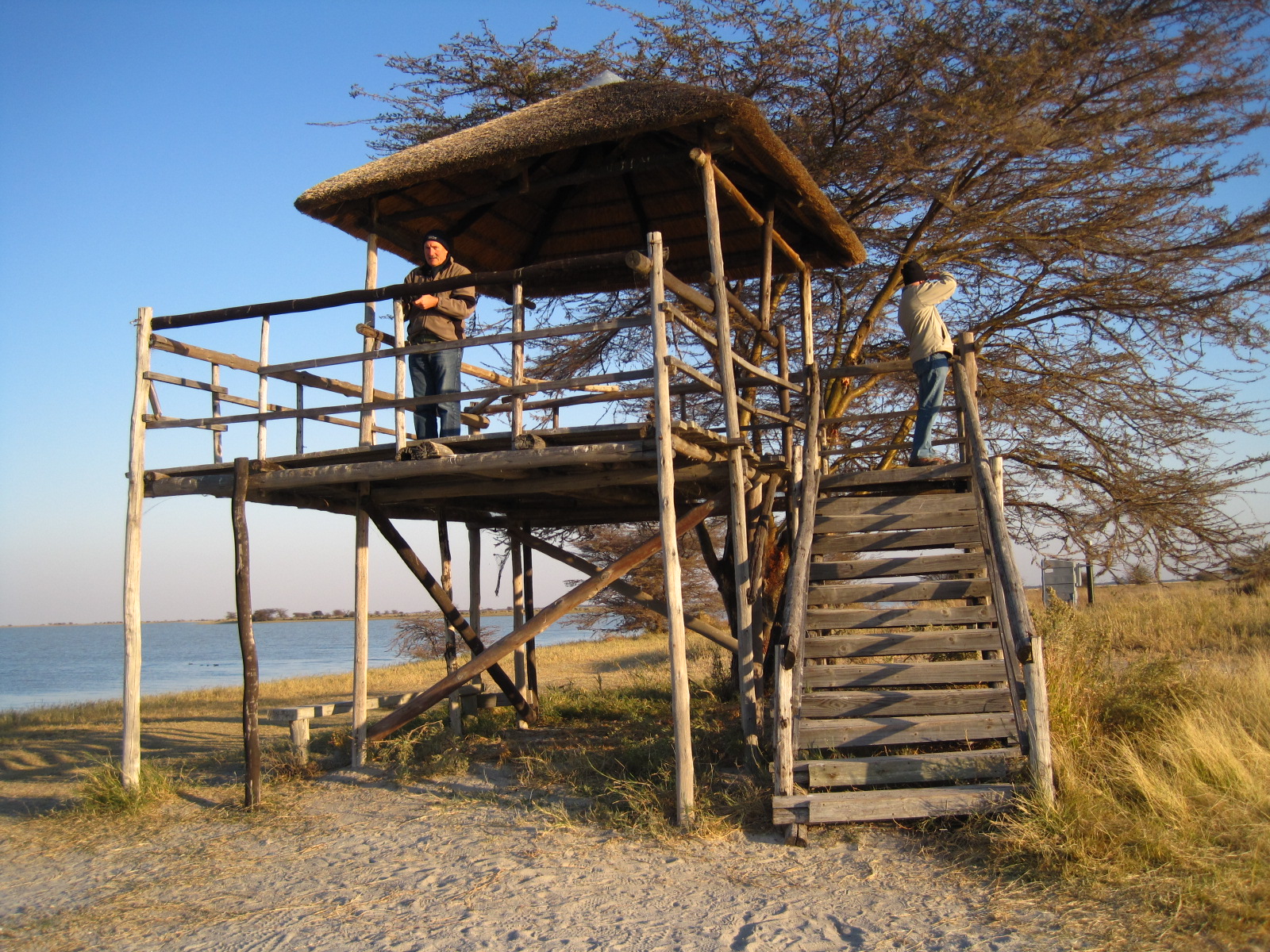 But definitely the stars of the show were small klompies of Great White Pelicans. Weighing 6—7 kg, they are the second-heaviest flying bird (Kori Bustard is the heaviest), but their hollow bones (says Pako) give them an advantage in the air. And, yes, to watch them fly low across the surface of the water is visual poetry. They glide with intense gracefulness, great wings beating silently and elegantly, bright yellow skin-fold sacs hanging low beneath their bills like a boat’s rudder. Then we found the miles and miles of cracked dry pans, following curving tyre tracks and hoof trails. We just loved it all. 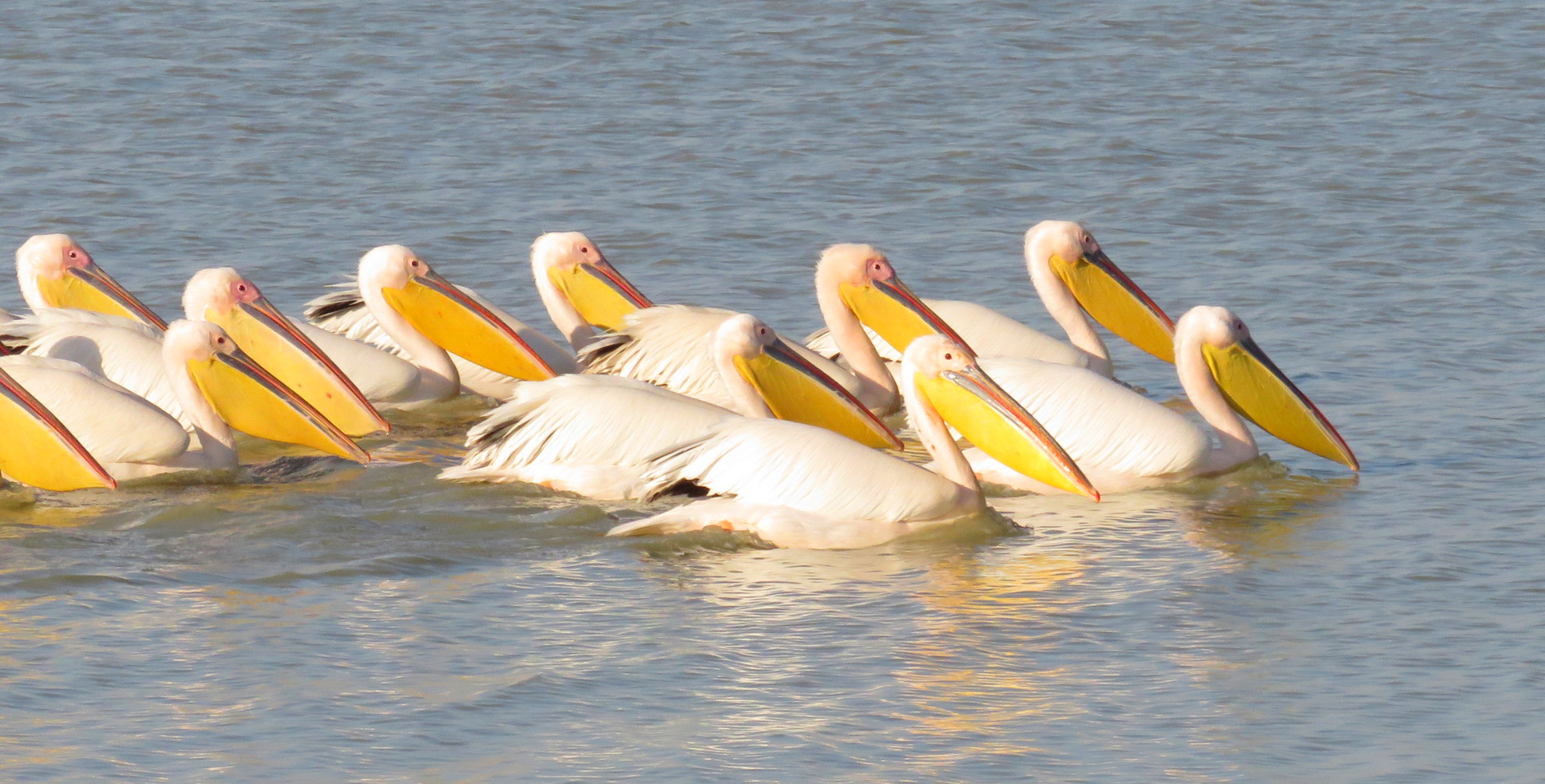 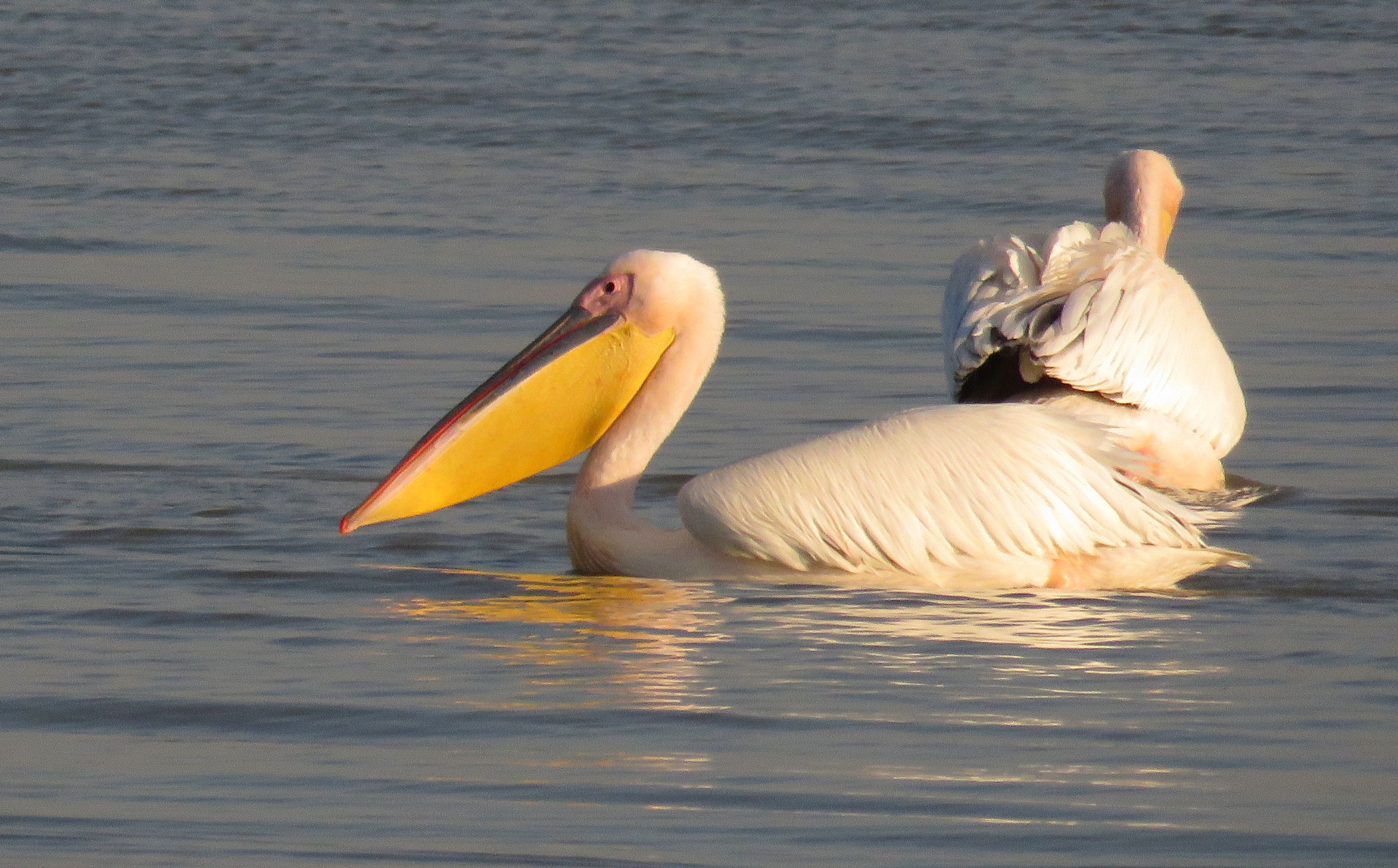 I can’t claim authorship of these pelican photos. Hirsh took the pictures!