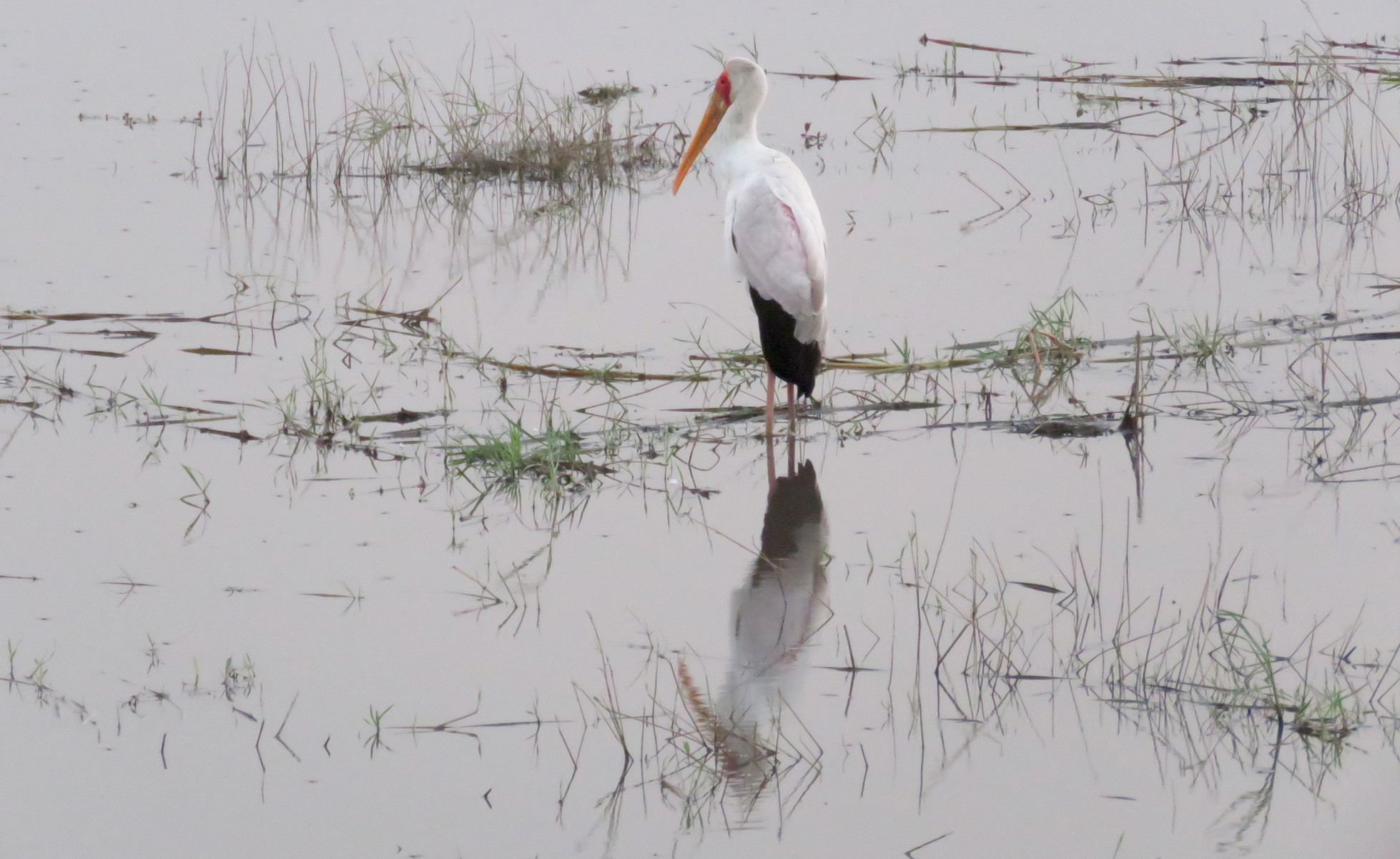 We are seriously enjoying the Tswana staff and game rangers. They work hard; they’re engaging, enthusiastic and funny — a great sense of humour is always lurking behind those big Tswana smiles. Today was about the game drives, one in the morning (5 pm wake-up this time, YIKES!), one in the late afternoon with a few chill hours in between.

Yet, again, it’s an eye opener as jeep after jeep loaded to the roll bars race through the Chobe National Park gates. The Guns ‘n Roses song “Welcome to the Jungle” was doing several loops round my head. The vehicles all follow the same road network, which mostly favours the river. Well, of course! So you’re always being flanked, passed or followed by a trail of jeeps. The thing is, the early mornings are mainly to find the Big Cats — lion and, more rarely, leopard. Our ranger told us there were around 60 lion in the park, with one particular pride consisting of 14 individuals. This meant that everything else was still tucked under the duvet as it was just too chilly for them to emerge. 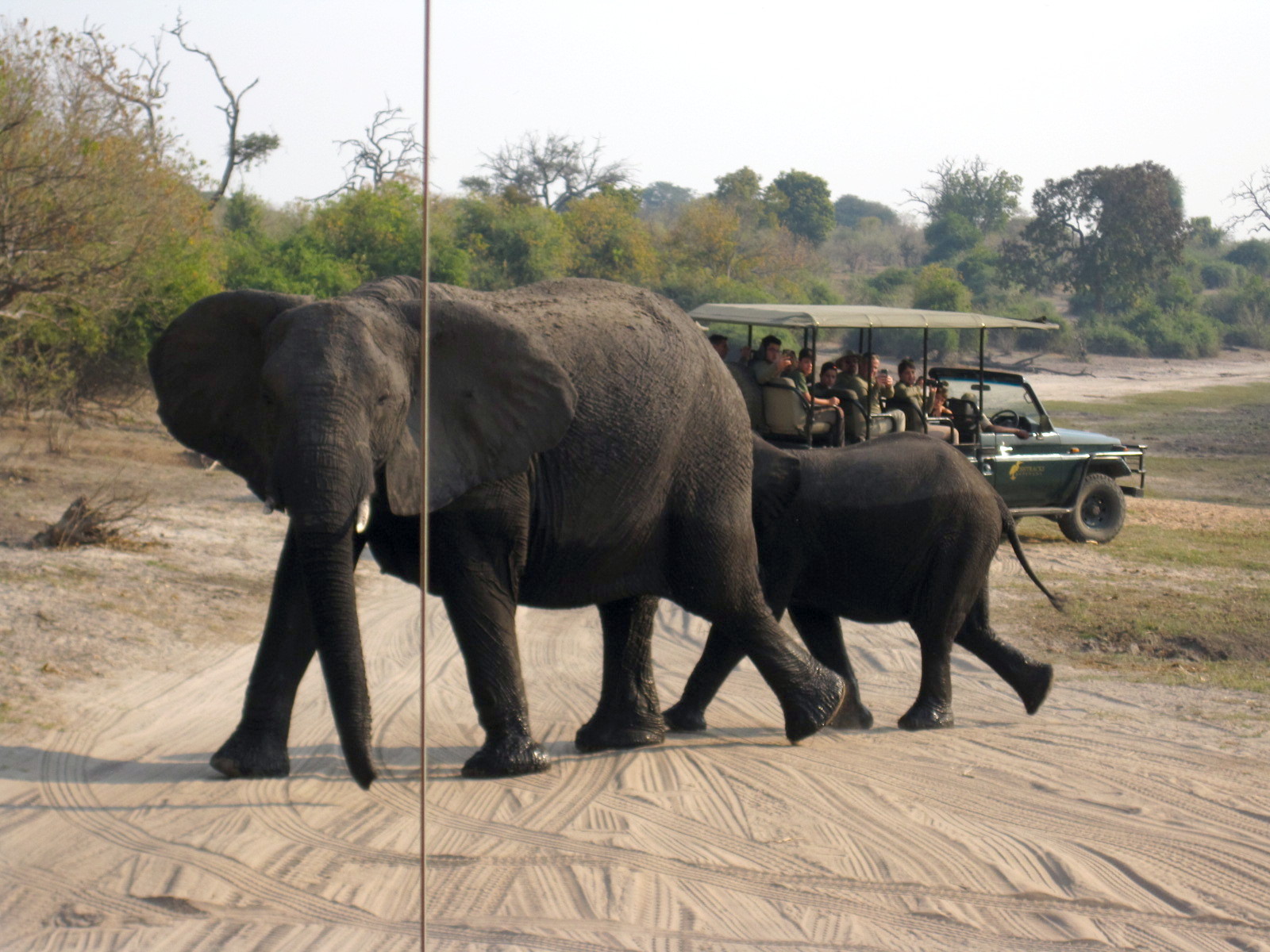 Giving us the beady eye, but not really that concerned with the traffic…

So, we saw lots of … impala. And a very large, quite hilarious, troop of baboons with the teeniest babies clinging upside down to their mother’s stomachs or performing somersaults and pulling each other’s tails. It was a maelstrom of barking, screeching, leaping and de-fleaing. The Chobe River had its herds of elephant and buffalo, but at a distance; the water bird life was good. Towards the end of the drive my favourite, the most regal of antelopes, made a supremely elegant entrance — male kudu with the most majestic three-spiralled horns I’ve seen in a while. A highlight was seeing puku, found only on the floodplains of Botswana and Zambia. It’s a small golden-brown antelope, a little like the red lechwe (also seen at Chobe) with short horns that curve backward and up. Rarity always fosters interest. 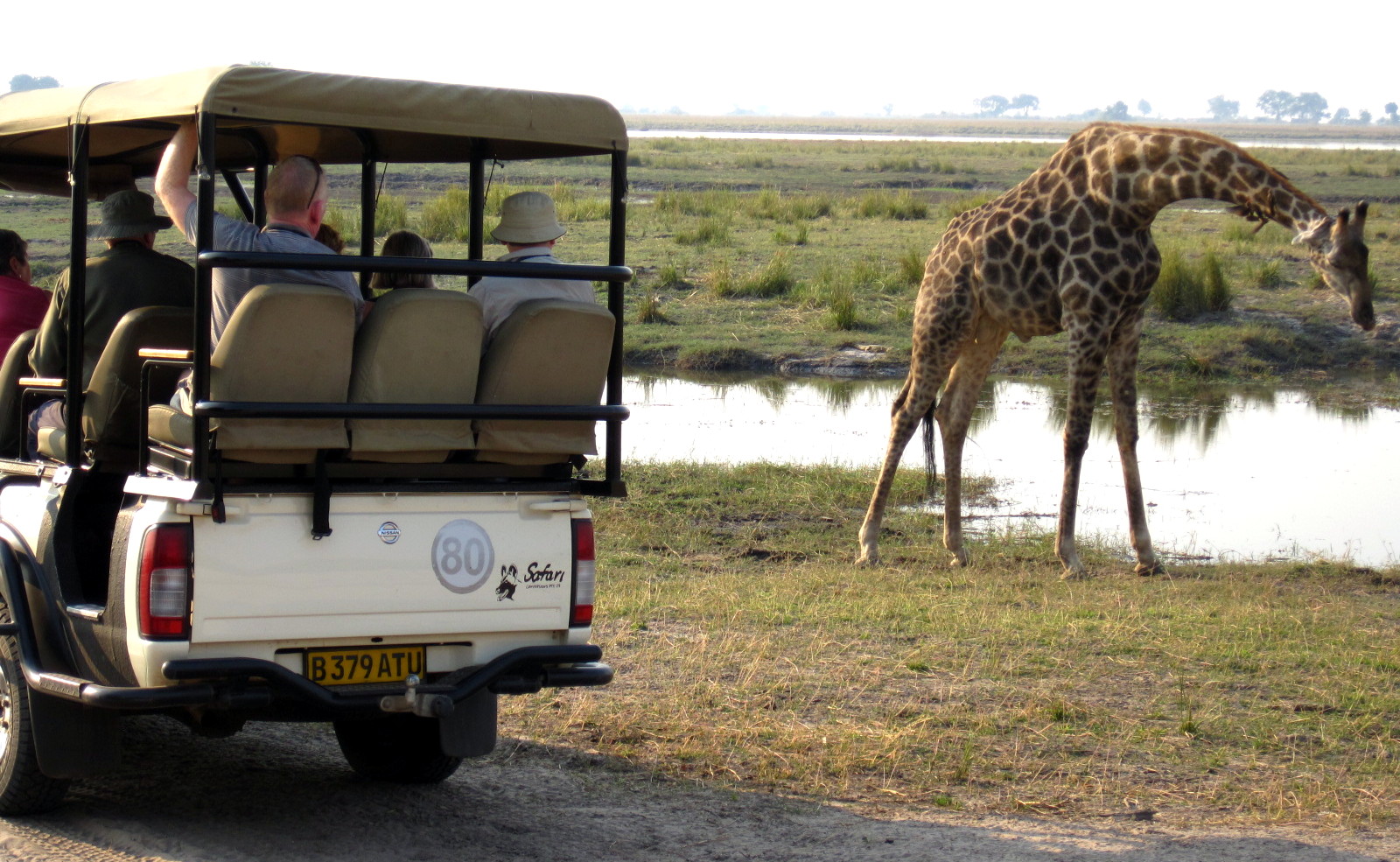 Giraffe, normally quite skittish, here not so much … I loved this new tidbit of information:
when they’re stationary they’re a “tower of giraffe”. When they’re moving
they become a “journey of giraffe”. 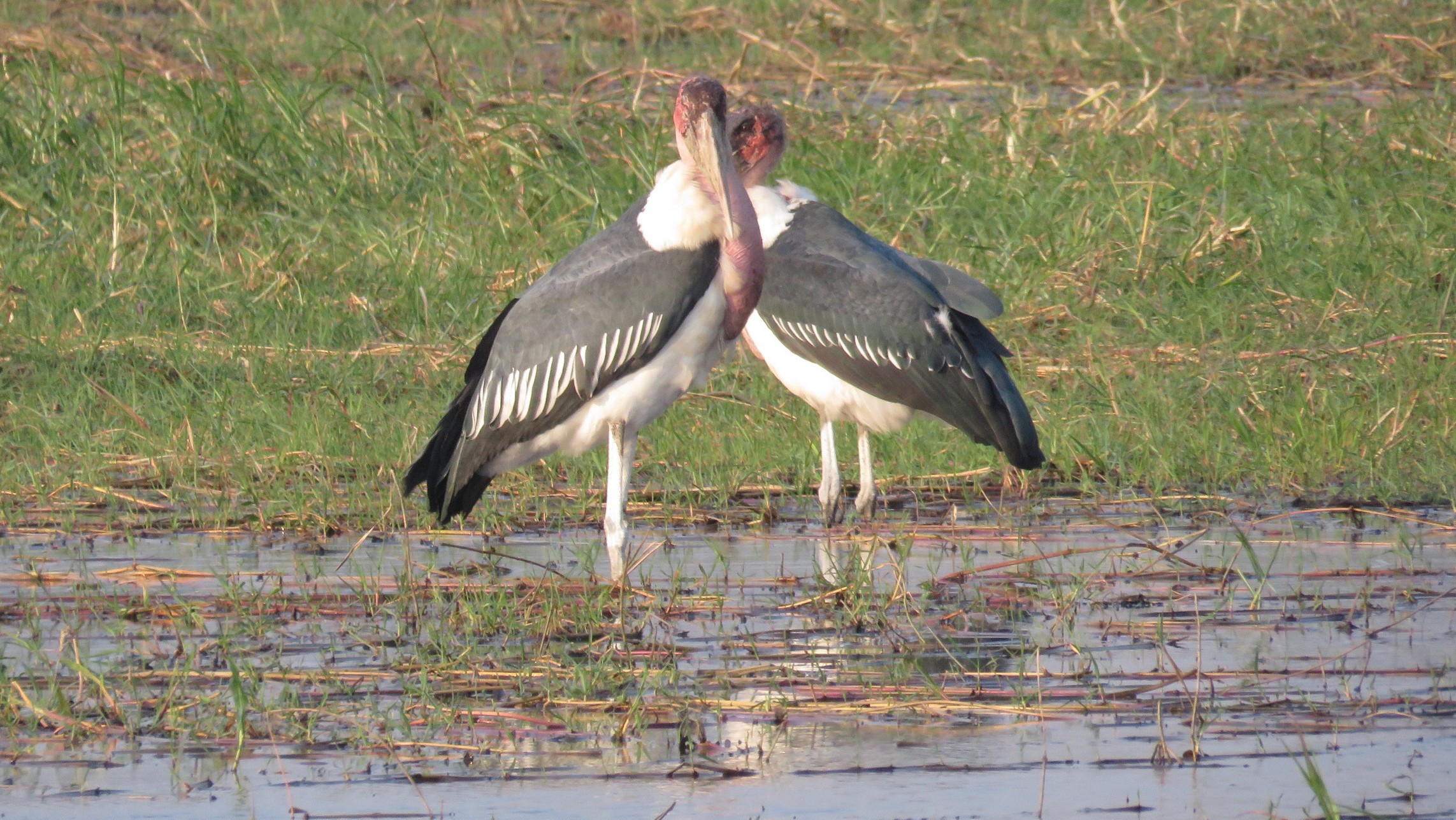 The creepy undertakers of the bird world, Marabou Stork.

On our evening drive, our charismatic ranger Mbara was determined to find us lion, as reports had been heard of them being seen near a Chobe private lodge. And naturally the Italian and American passengers wanted Cats. Once more, we spent quite a bit of time tracking the river, getting within arm’s length of elephant herds, pods of hippo, giraffe, and almost pushing our way through impala clustered on the road. I was a bit astounded at how close we got to the animals, even matriarchal groups herding diminutive babies. On one occasion the females completely encircled two babies, and we were given an indignant trumpet or two, but mostly we could almost touch them. Nothing like the sometimes cranky young males or irritated bulls at Addo. I suppose with the sheer volume of traffic in Chobe, and the absence of any threat from vehicles, the wildlife has become habituated to the revving and engines and voices. I prefer them a little wilder myself! 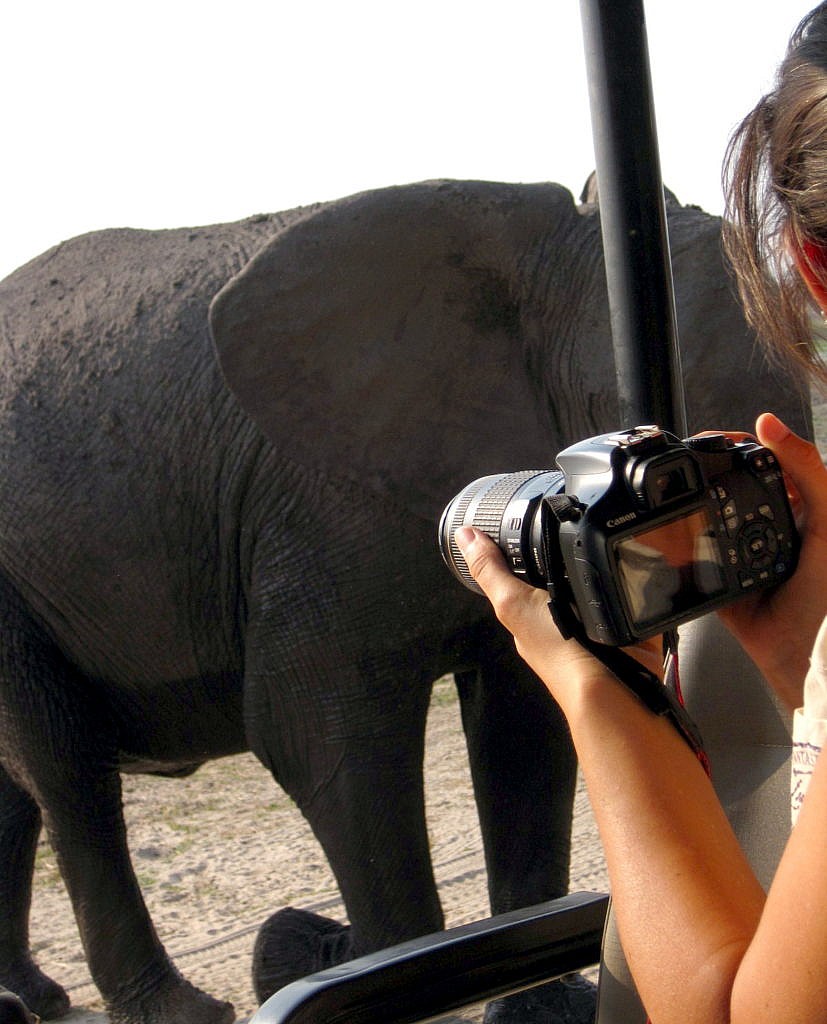 This is how close the ellies allowed us to get. 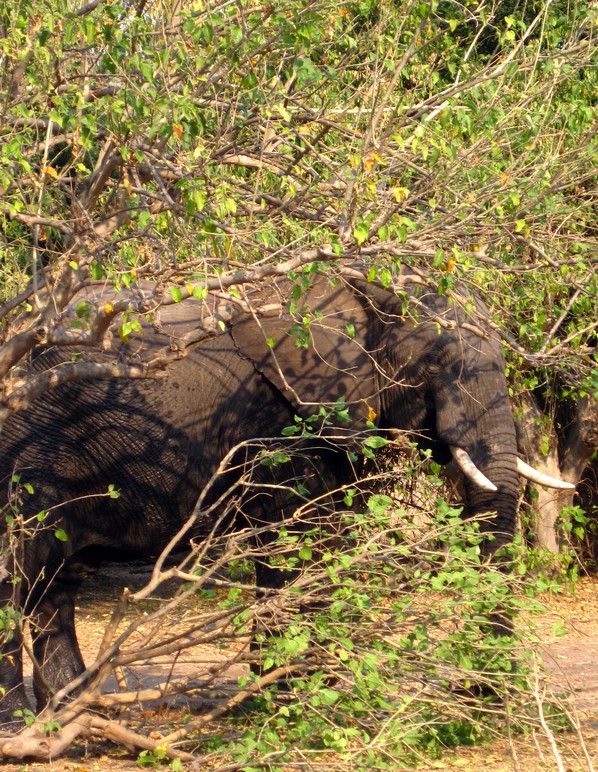 I loved the shadow pattern on this elephant trying a little subterfuge.

Mbara constantly on his radio, he suddenly, without warning, did a wild U-turn, pushed his foot on the accelerator, and roared along the Chobe shoreline with little regard for other vehicles, finding his own shortcuts and shoving past them. Something was up. Out of nowhere there was a string of jeeps racing in the same direction on the sand. We got to a stationary huddle of vehicles, cameras all aimed at the water. Mbara revved into reverse, tore around to the other side, screeched to a halt. A small leopard crouching at the water, now entirely spooked by all the activity, turned to find an escape route. There was none, so he loped towards one of the vehicles, slipped under it and emerged the other side — right in front of us. Then he was swallowed up by the bush.

For the next 15 minutes we managed to track his progress through the trees and bushes from an upper road that ran parallel to his route. Some of us got pictures, many didn’t. Hirsh was one of the successful ones. Although it was utterly thrilling to have such a rare sighting of this most exquisite of creatures, I was filled with misgivings at the way we achieved it. I understand each ranger feels compelled to deliver according to his or her clients’ wishes, but . . . . . . . . . . 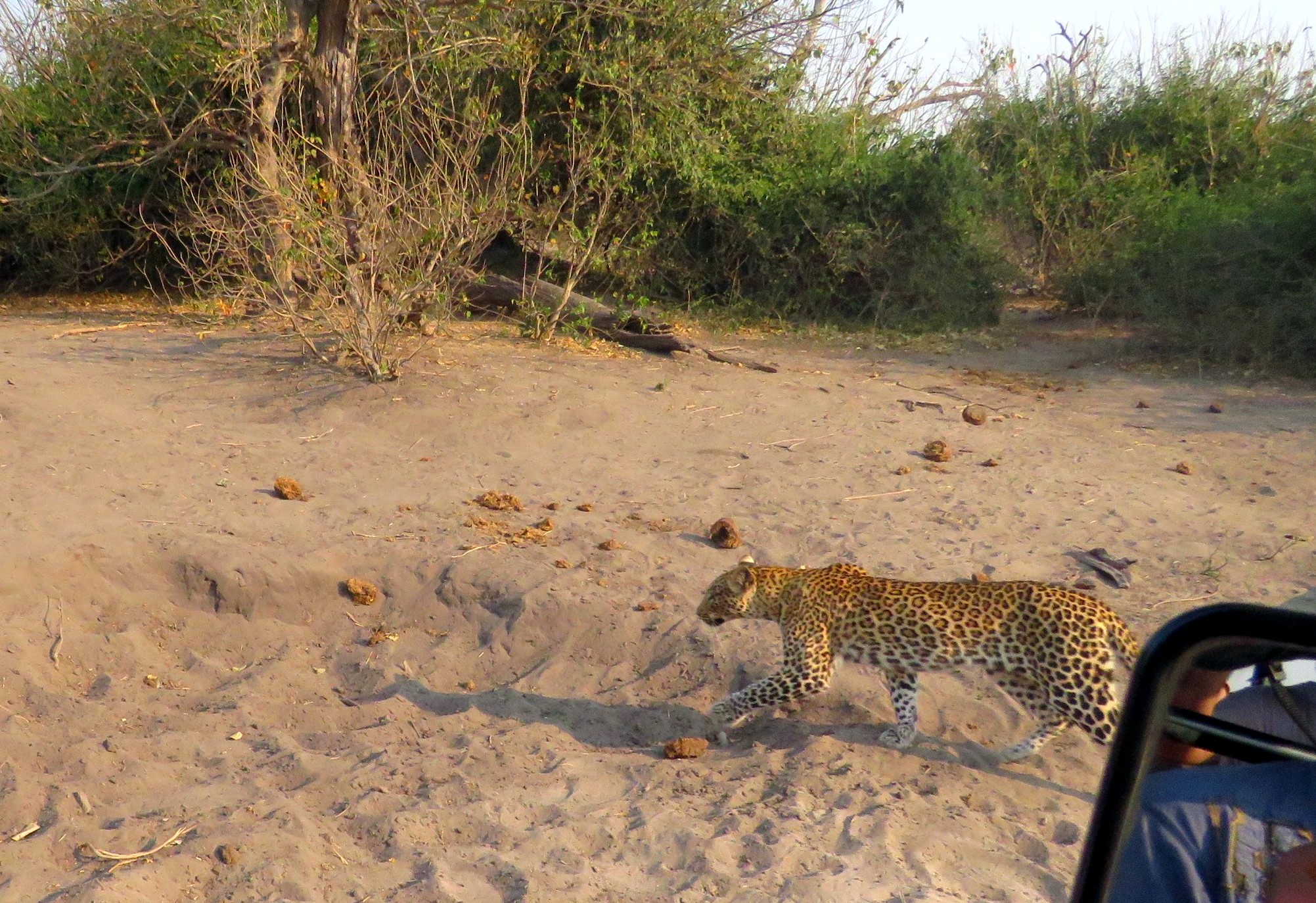