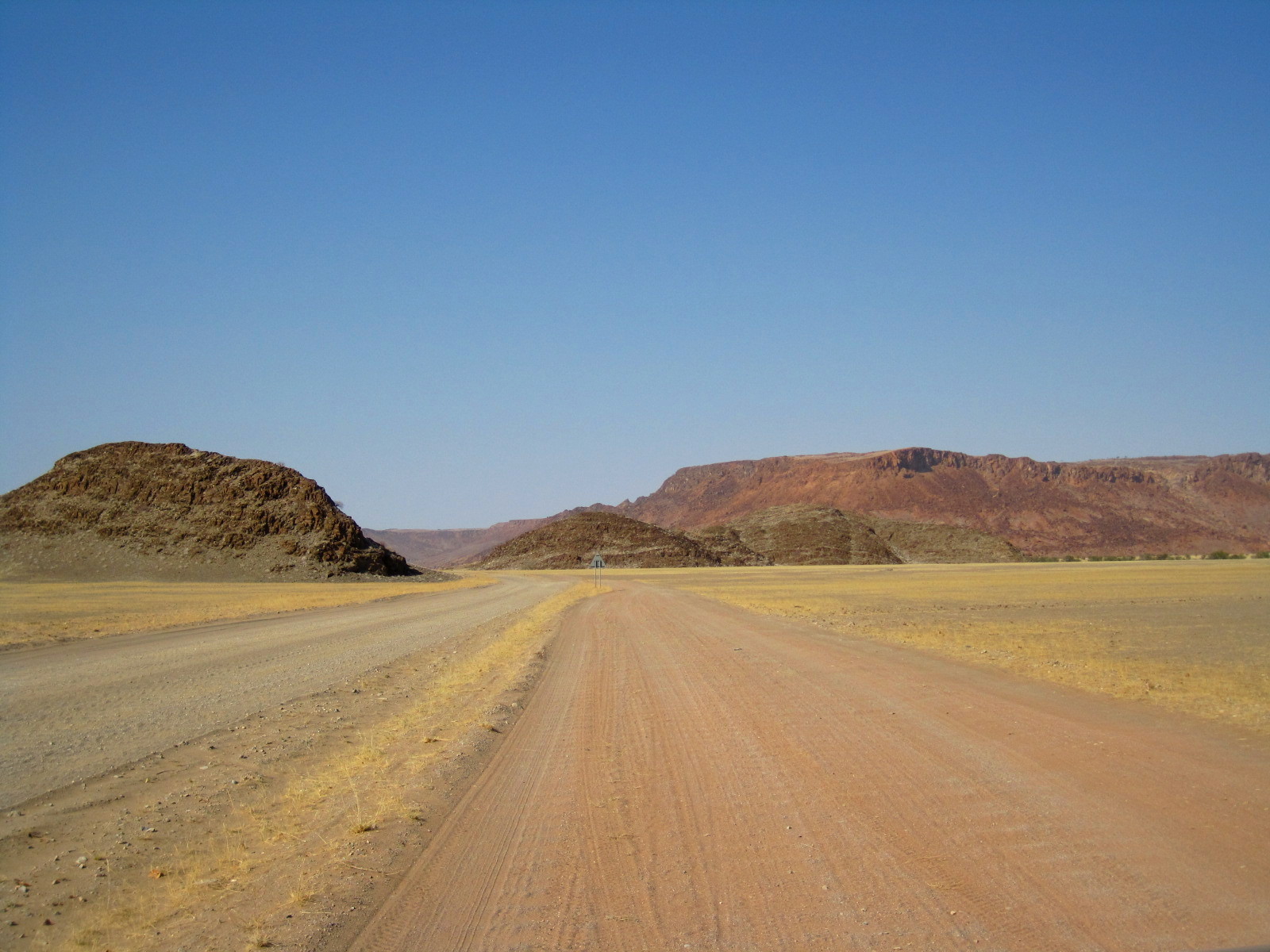 Engulfing dust, persistent corrugations, shuddering and juddering and bouncing. The speed at which the rented double-cabs (and local drivers) tear along these gravel roads, no wonder it’s like driving over a cattle grid for 60 kilometres at 60 kph. Which is exactly what we did, driving 2 hours due west to get to the Twyfelfonteintein rock engravings. Sometimes the forced detours beaten out by vehicles in the veld alongside the gravel were worse than the road itself. It did start off well on a nicely graded route, but then deteriorated fast. 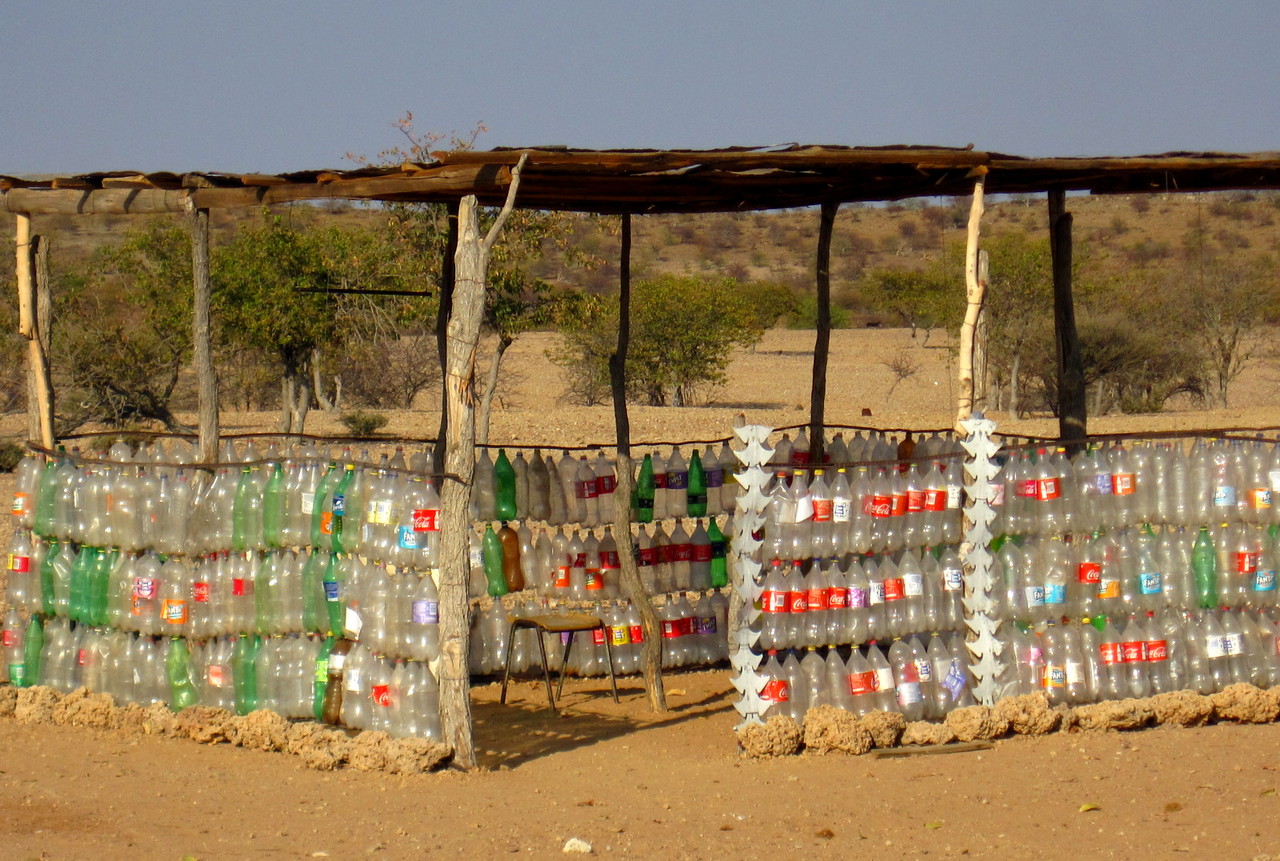 Innovative use of plastic! Some tips to be gained here …

Never mind, this part of Damaraland is starkly beautiful, reminiscent of the painted mountainscapes of the Richtersveld, or even Death Valley in California/Nevada, which we’ve visited. First there were black, ridged, low hills; then high barricades of a distinct red-pink hue, clarified later by the russet-pebbled plains. Finally, mountains that morphed from granite plugs to upended black stone ridges to purely stones and boulders … and back again. The intense colours were like ground spices … sumac red, nutmeg brown, cinnamon grey, charcoal black. 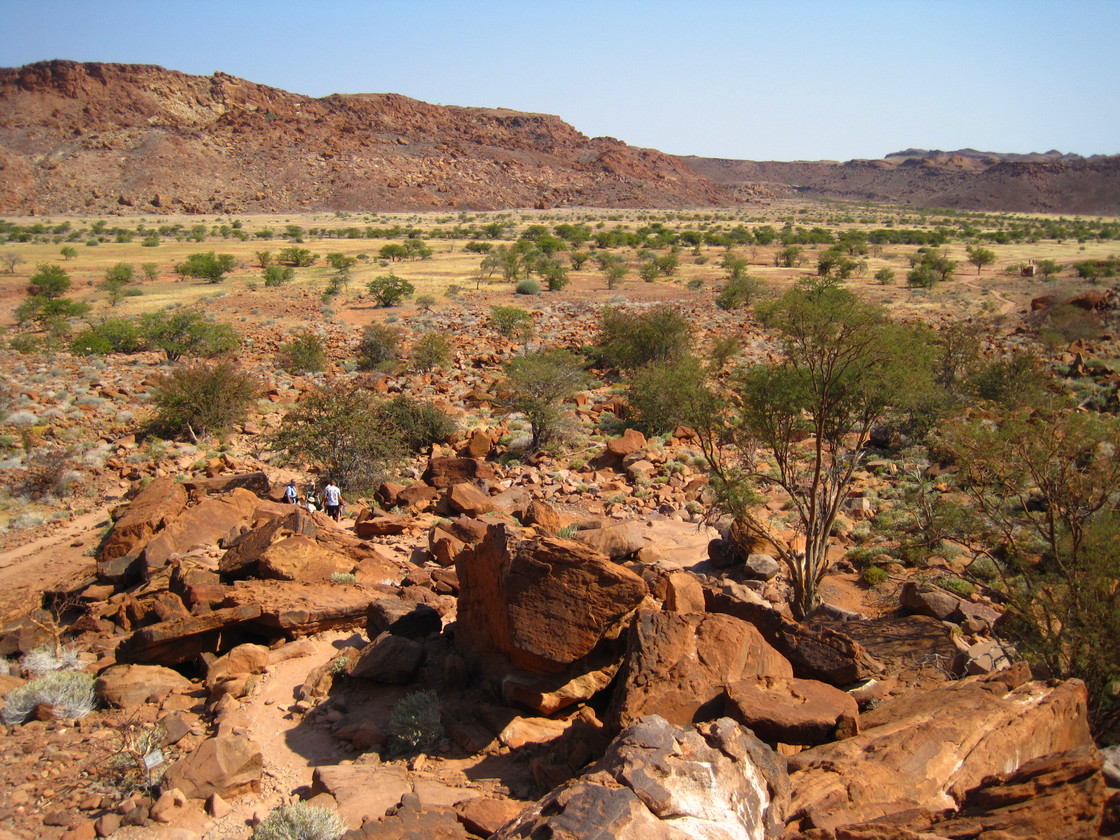 Twyfelfontein has become big business. Now there are tour-bus and overlander shelters for parking, a lady with a clipboard to sign you in, a tourist centre with crafts and curios, a row of pit toilets (horrors), and then you pay your dues and are assigned your guide. Ours was a very laid-back, dreadlocked Damaraland local who went by the name of Reinhold. Fascinating juxtaposition, that.

We’ve been here before, but it’s a fascinating place and as worthwhile a visit the second time around. Pity we set off at 11 am, as the light got harsher and harsher. No prize-winning pics today! The best time would be late afternoon, when the low sun burnishes the boulders a lovely red. The rock engravings, as well as a few paintings, were left by San hunter-gatherers, and according to UNESCO (this is a World Heritage Site) are believed to be 2,000 to 6,000 years old. Among the animals featured are hippo (!), rhino, ostrich, and a striped zebra. 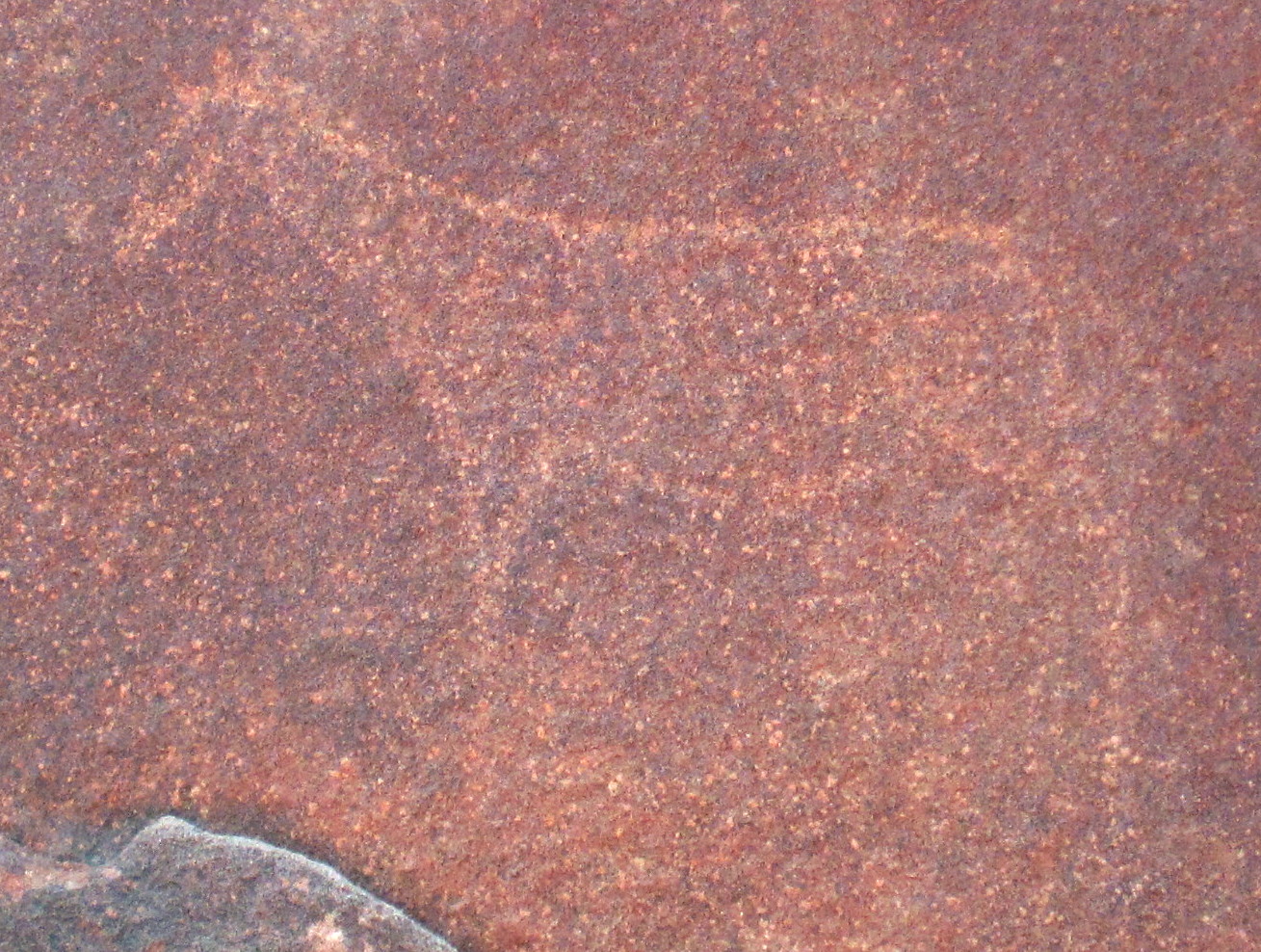 Look carefully, and you will see the zebra’s stripes. 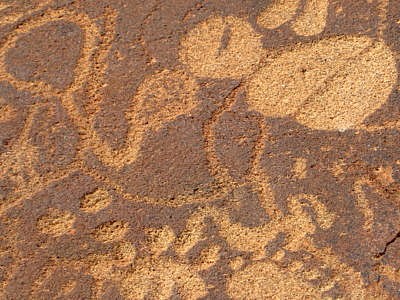 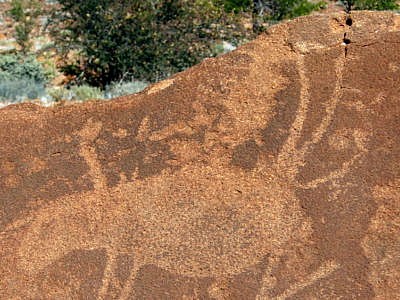 Left One of my favourites … this is an ostrich, and the series of lines radiating from the body to the right represent the movement of the neck as it lowers itself to the water to drink. These San artists are something else! Right This is like a primitive school blackboard … it’s a compilation of different animal spoors, horn structures, migratory loops, and there’s even a comparison with human footprints! Love it. 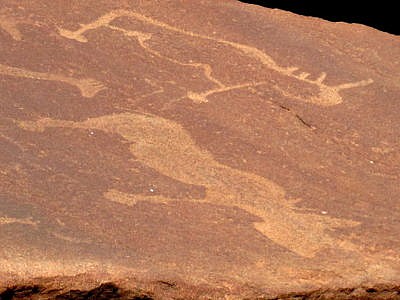 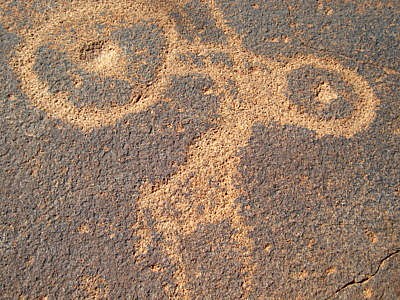 So rhinos existed here centuries ago, but more fascinating were these holes and circles; it was a rock face with a series of the circles to which different animals were attached. It’s a primitive map of the water points in the area recording what animals visited each one, while gouges in the centre of circles indicated permanent springs! Ingenious. 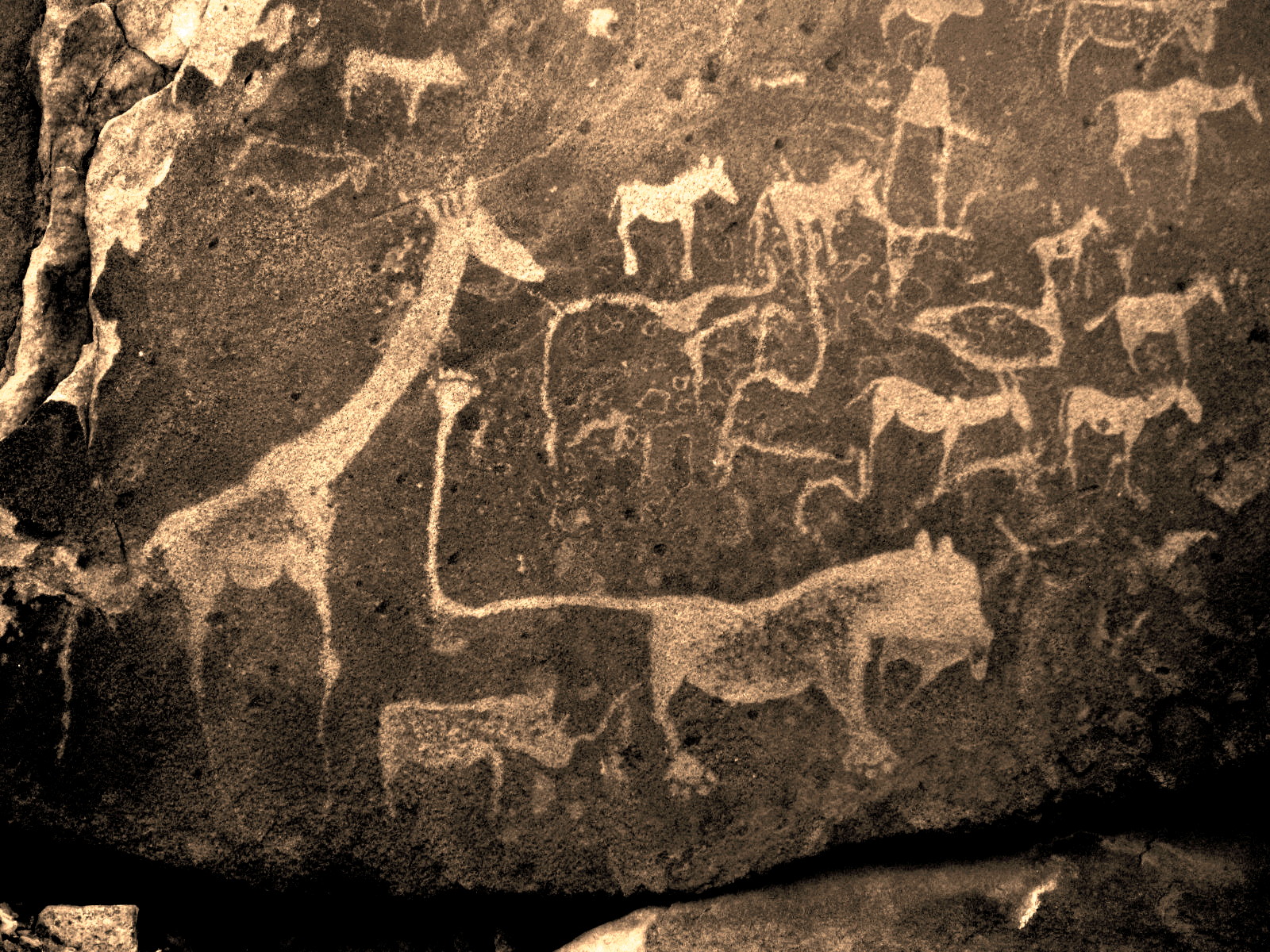 A slightly doctored sepia version of the most famous rock at Twyfelfontein, with its lion, rhino, giraffe, and just to the right of it, the outline of an elephant. Clare, this sepia photo is for you! 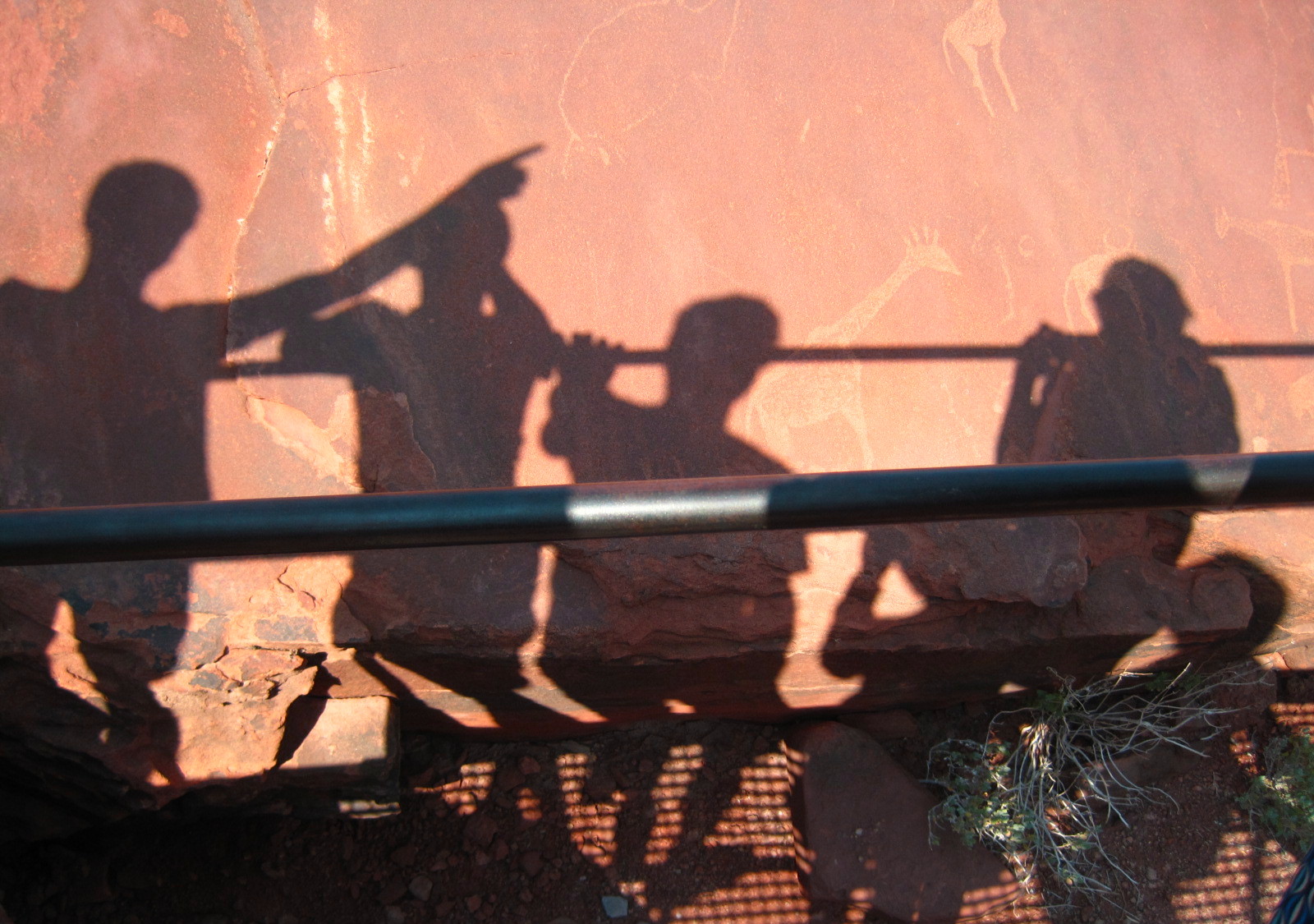 A bit of modern human interaction at an ancient site … 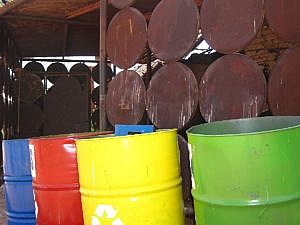 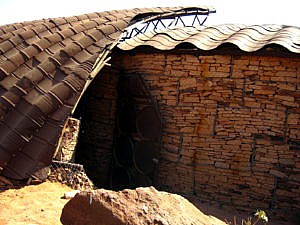 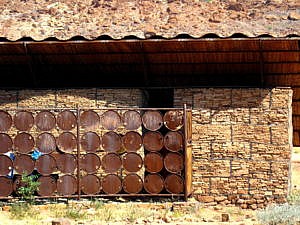 Innovative architecture, and nice use of drum lids.