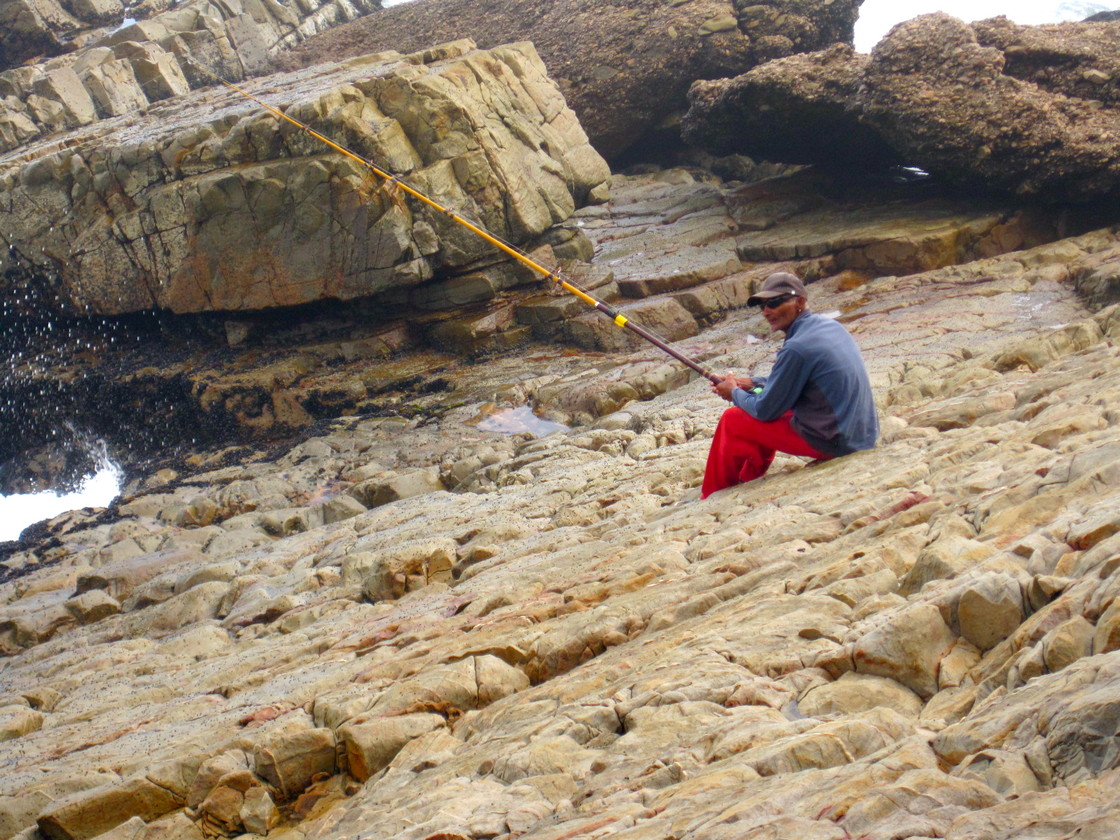 “You can do this, Mariëlle,” said our world-travelled, seasoned-hiker friend. “It is really not smelly. Besides, it has the best sea view.” He was talking about the compost loo at the isolated Fountain Shack on the Robberg Peninsula in Plettenberg Bay. And he knows how I recoil at anything that doesn’t scream gleaming scrubbed porcelain, running water, and a flush mechanism.

I said yes. Which is how four of us set off loaded like Basotho ponies, though not as sure-footed, down the wooden boardwalk winding across the rocky Peninsula, headed for said shack. 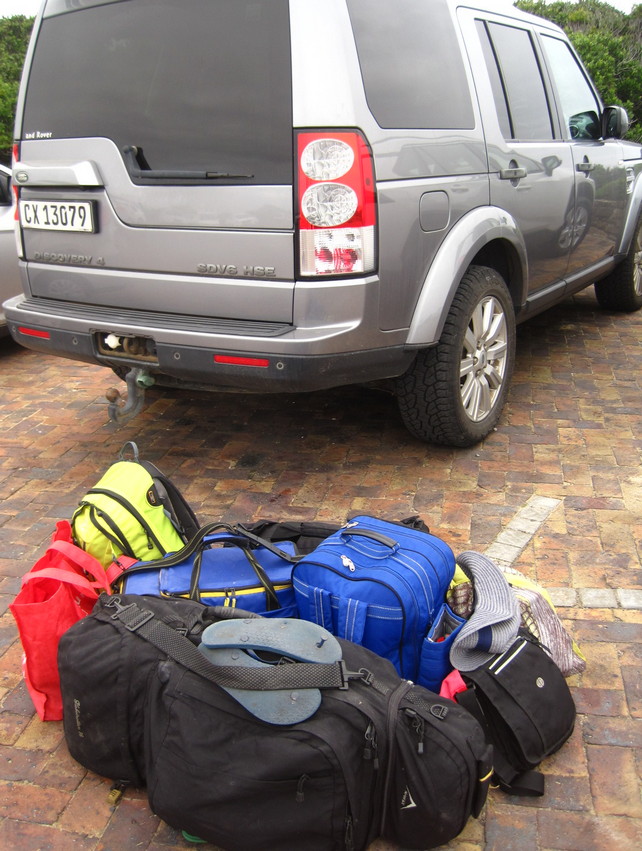 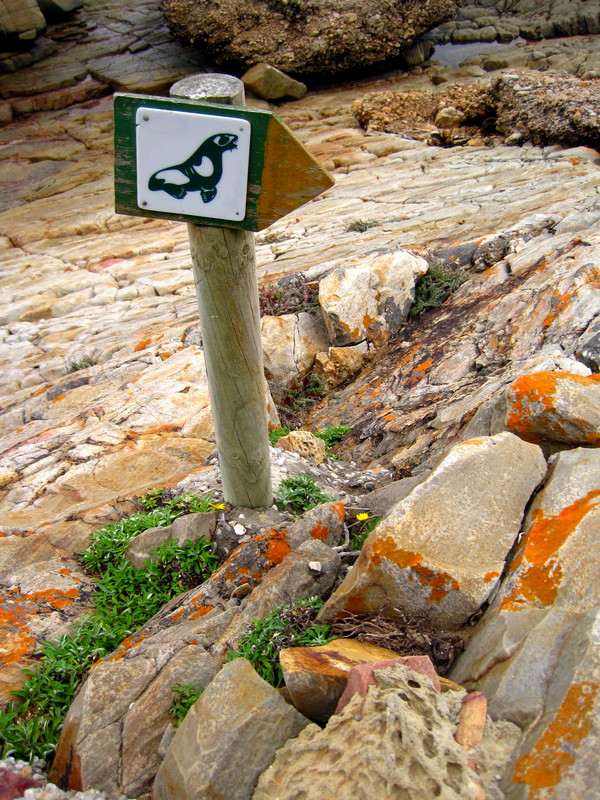 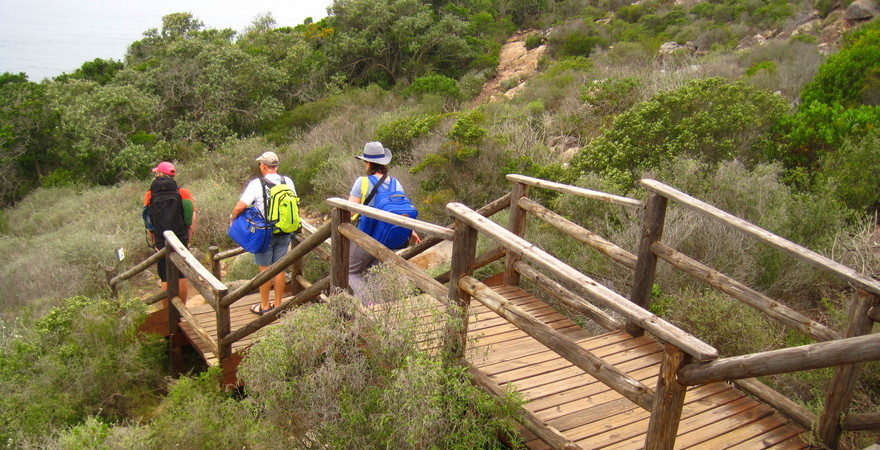 Thing is, you have to work for the privilege of the Fountain Shack. Which means some 45 minutes (more with rest stops) of stair-climbing, boulder-hopping, sliding through a rock gap or two, and gritty soft-sand walking. It’s not as hard as it sounds. But when you’re like us, the wine has to come along, plus multiple ingredients for gourmet meals (think T-bones and a whole Mediterranean stuffed kabeljou), copious quantities of water, sleeping paraphernalia, and extras for emergencies (the non-serious kind). When you have the entire Robberg Peninsula to yourselves, a rustic no-frills fishing hut at your back, glittering stars and waxing melon moon your sentinel, and waves thundering metres away, you might as well enjoy yourselves. 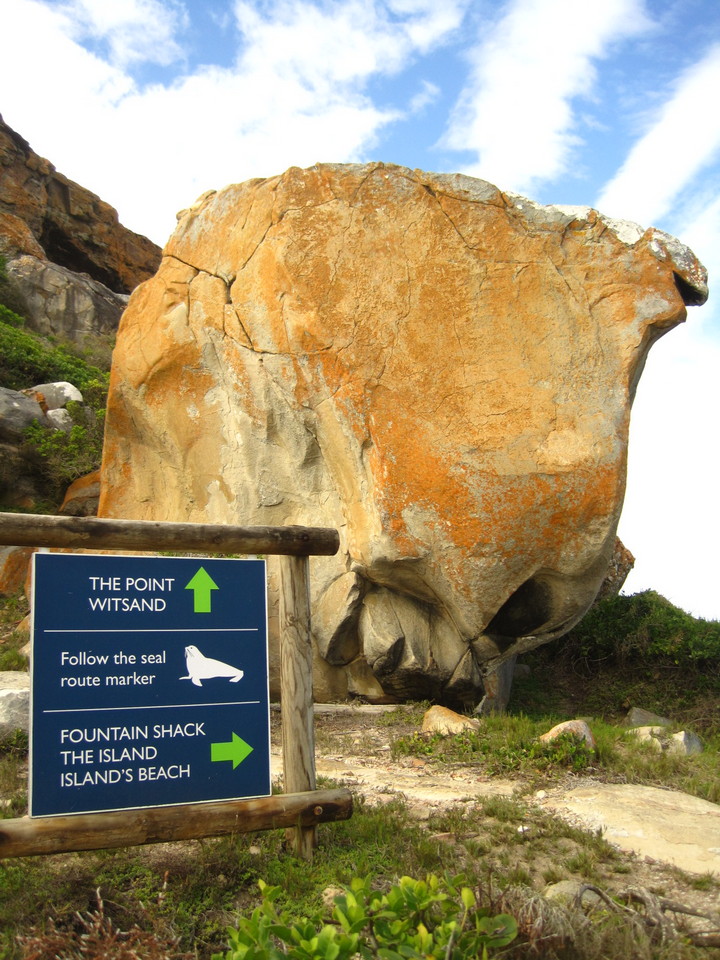 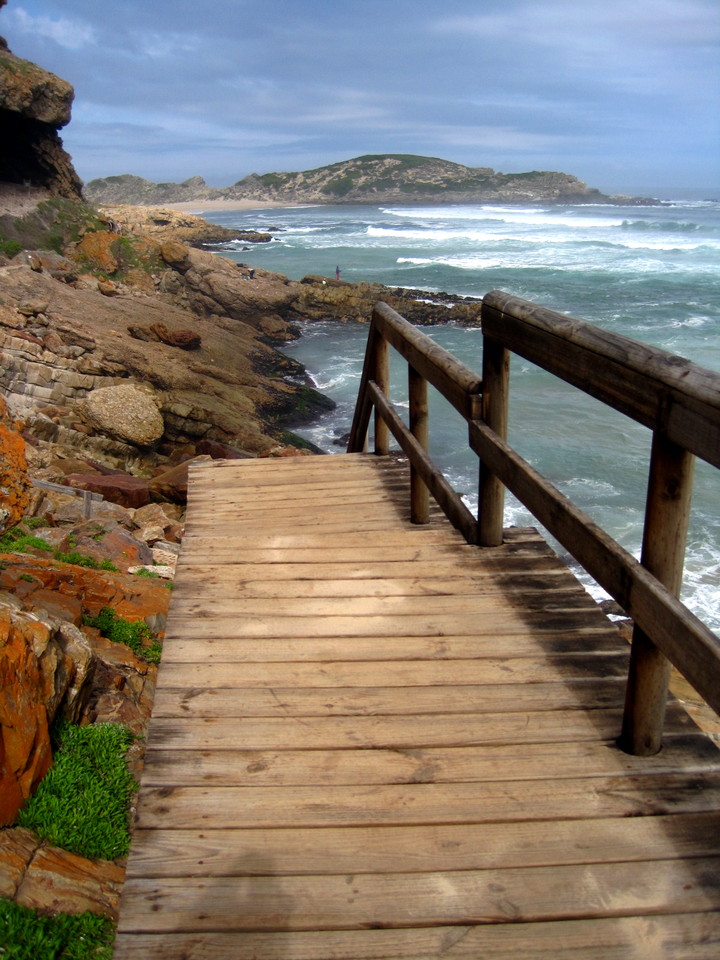 We’d tracked rain forecasts with trepidation. Kindly, the waterworks had hung in the wings but moody unpredictable skies barrelled us on from behind. Perfect conditions, though, for the moisture-evaporation that rose in a vapour from our bodies. And temperamental clouds do make for dramatic photos. So, yes, well-balanced footwork is needed over a higgledy-piggledy sea of split boulders, especially when there are what feels like cannon balls in your pack; some scrambling, rock handholds and careful foot-placing along rock slopes is required; and a stretch of sinking into and trudging across fine soft sand (heavenly pristine, how could we complain?!). All necessary for the final push to the wooden “shack”. 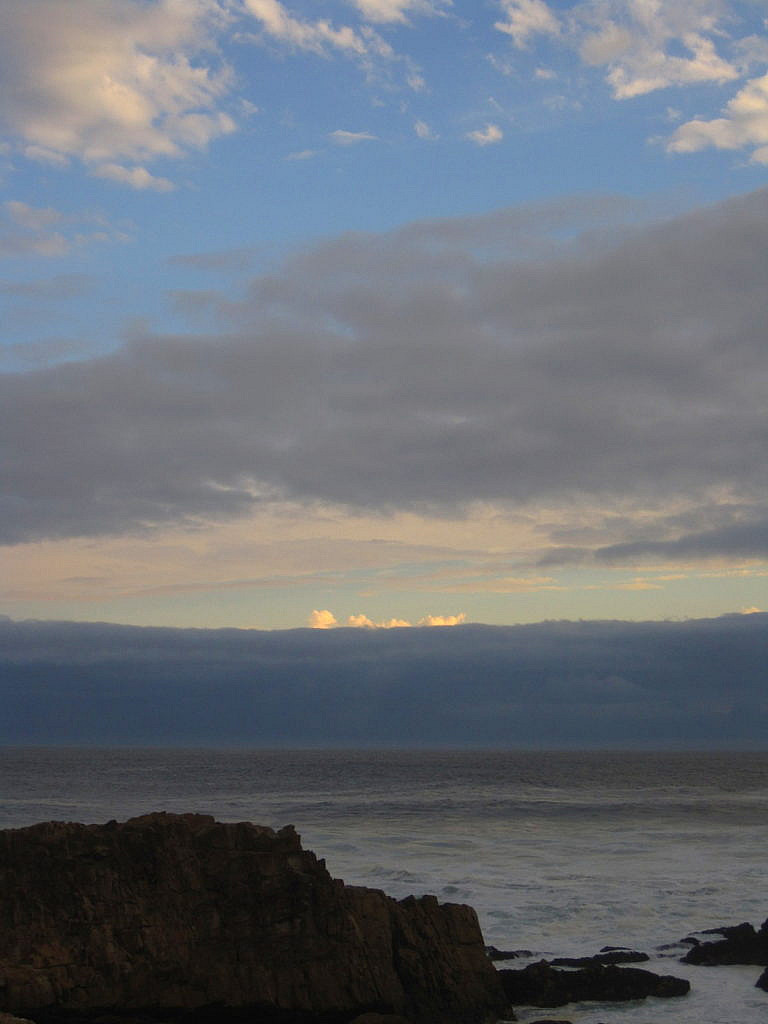 Morose cloud bank sitting on the rim of the sea. 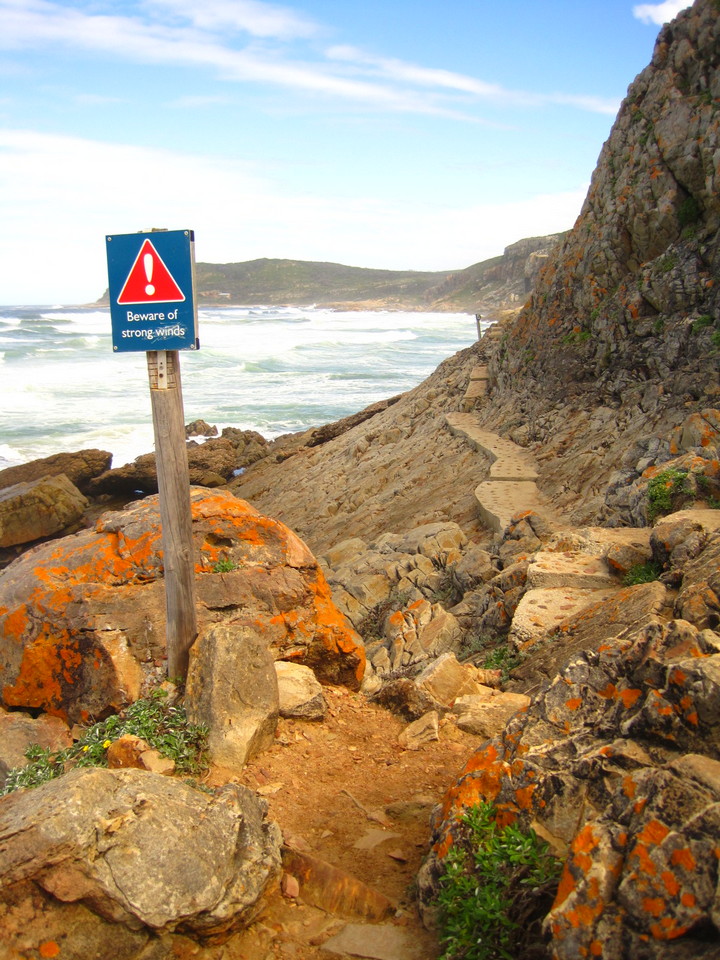 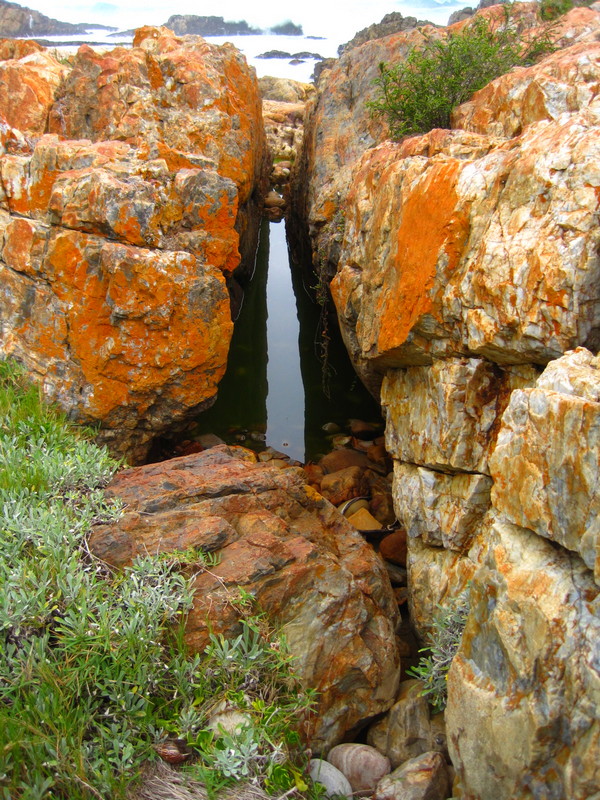 Sometimes a clear blue window opened. And we got secret reflections off water.

The Fountain Shack, inside, is in fact a large open room with a wooden floor, four double bunk beds at one end, a kitchenette and heavy wooden table and benches at the other. Solar panels (when they’re working) deliver electric lighting and a measure of hot water, while paraffin lamps are the alternative. Best spot is on the deck, with the heaving, hissing, crashing sea your constant theatre. 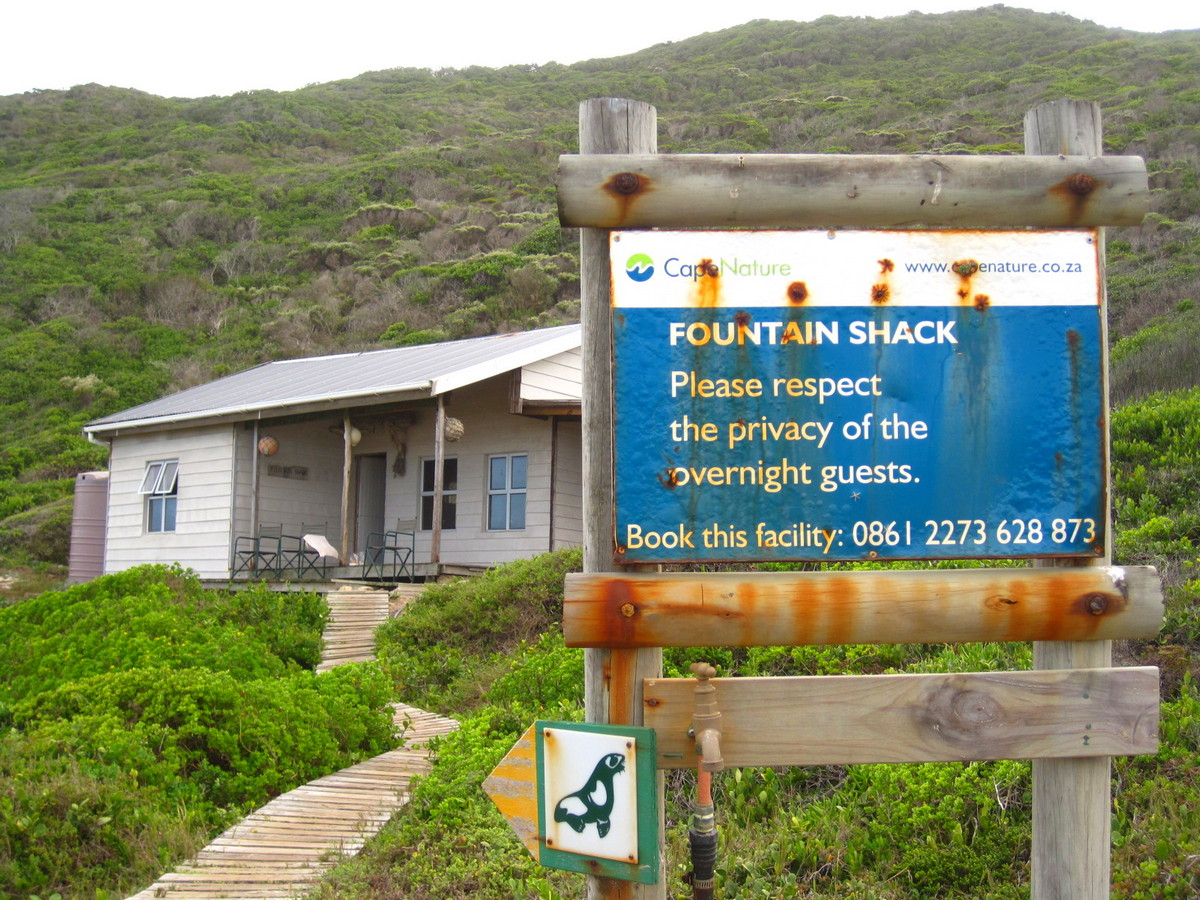 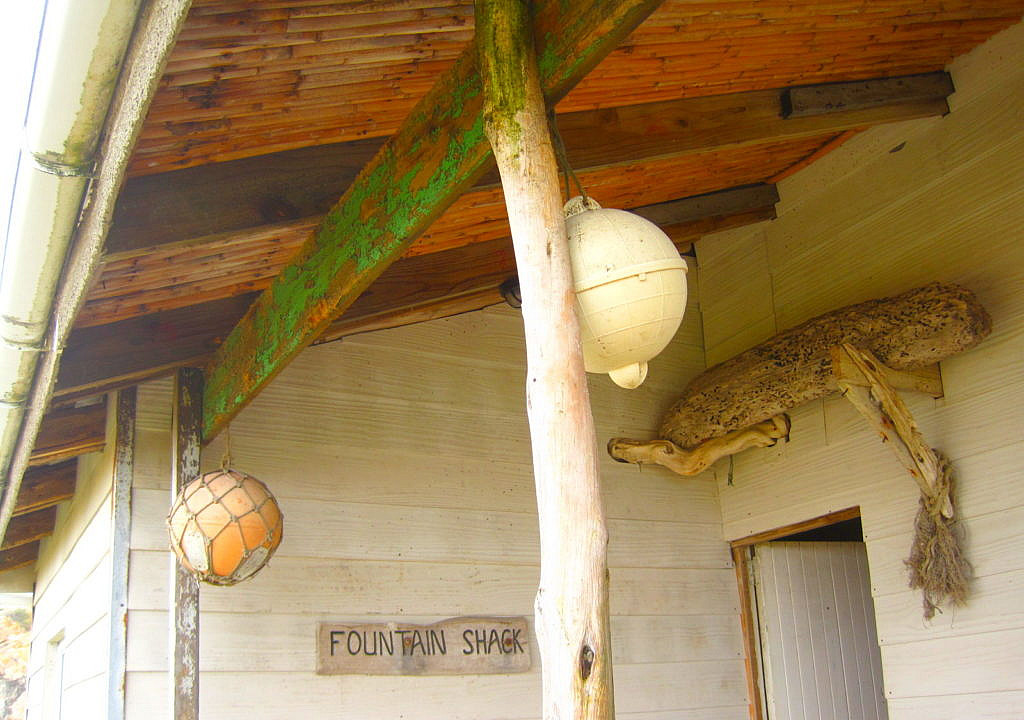 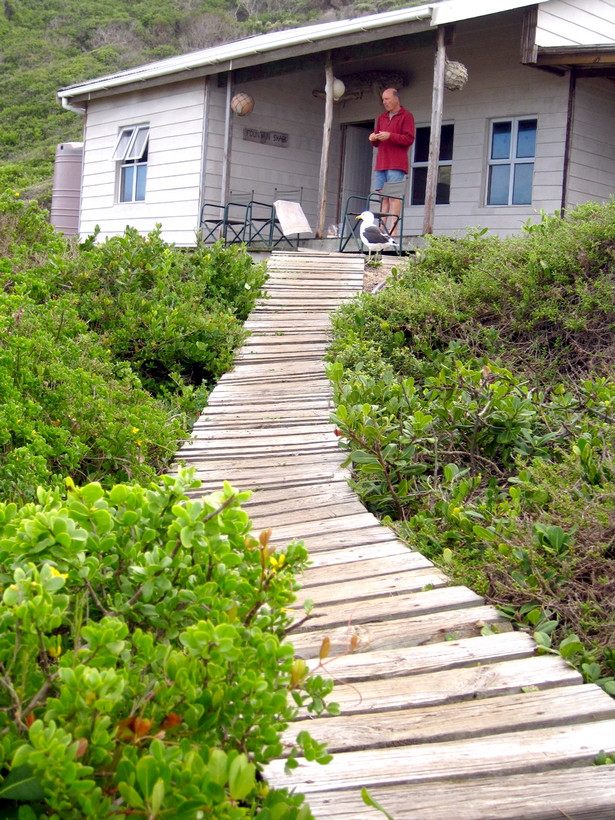 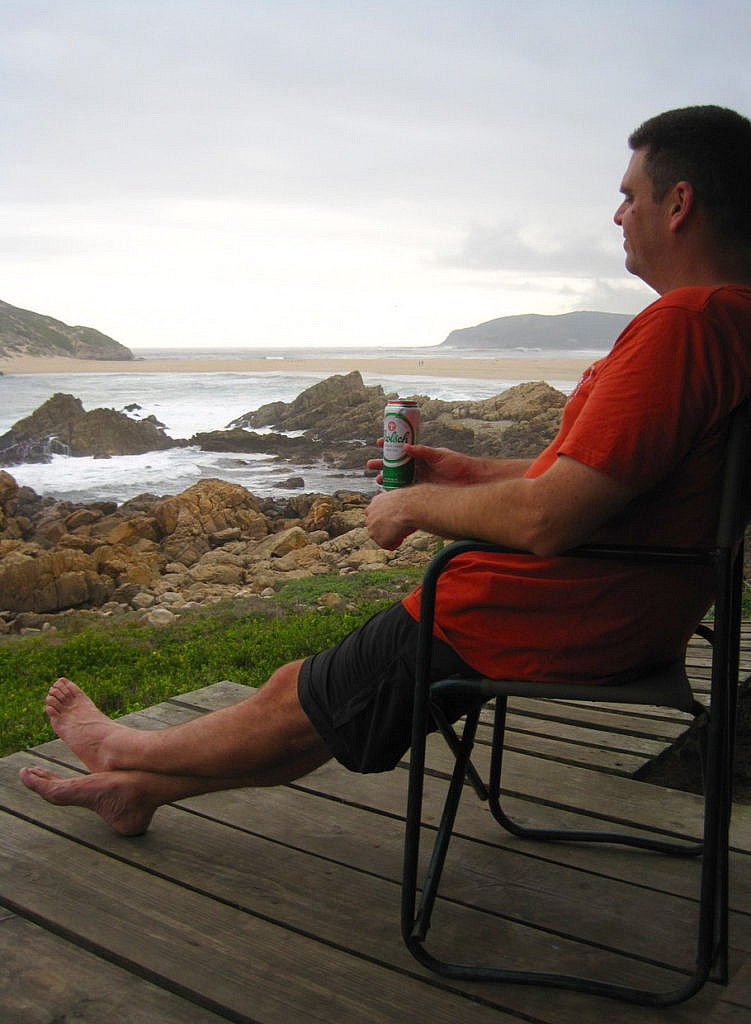 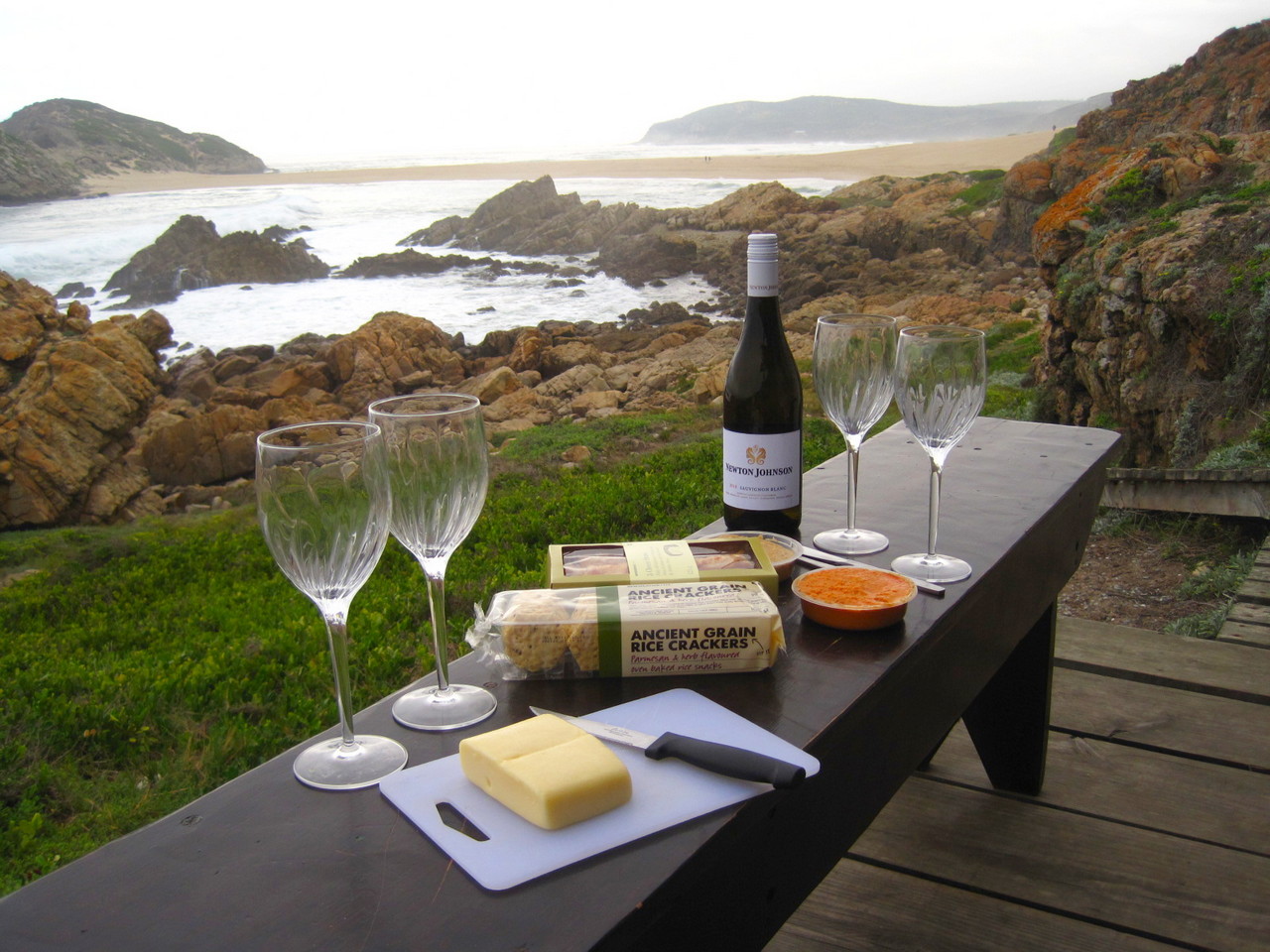 Sundowners (well, not much sun, but anyway…) was a mini feast. 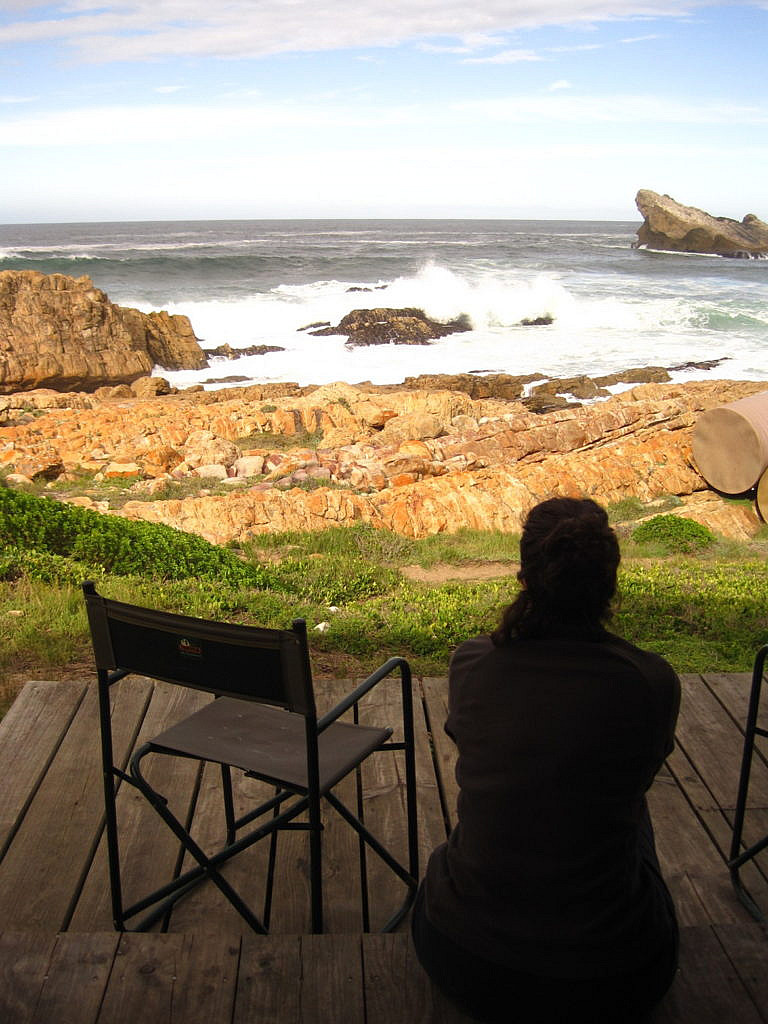 What is it about the sea that fills us with such peacefulness? It is immutable. Unremitting. Enduring. The pulsing swirling advances, the dragging hissing retreats. Through its constancy the sea reassures us. Across the night, giant breakers curl then boom like Japanese tako drums. Our own personal opera.

I’m here, says the sea. And I will always be here. Whatever happens to you, to the world, I will still be here. 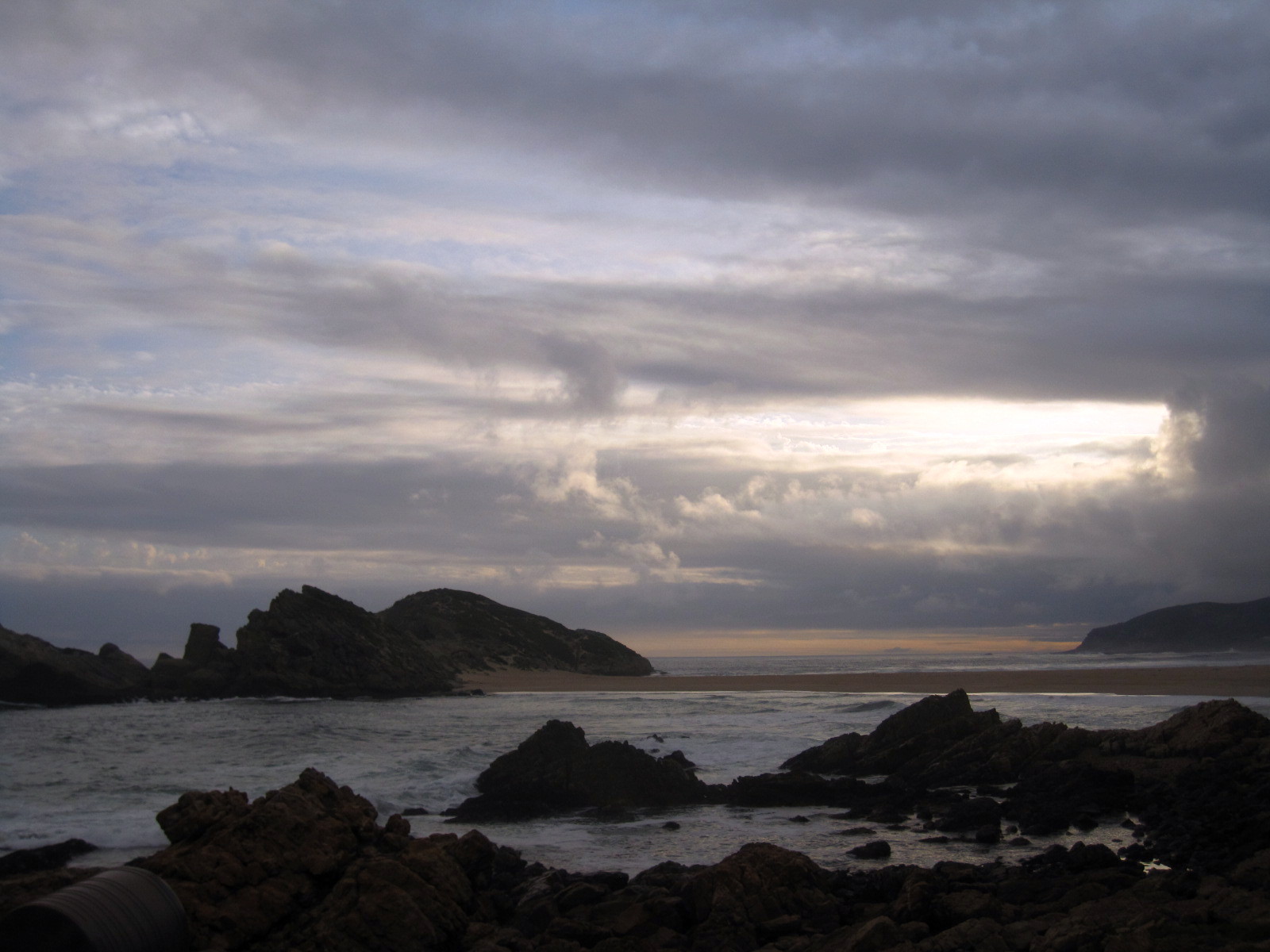 At high tide, foaming waves spray over the rugged crusty rocks that front the onetime fisherman’s cottage, spidering out in tiny rivulets across the rock face like so many fountains — this is the inspiration for our simple shack’s name. 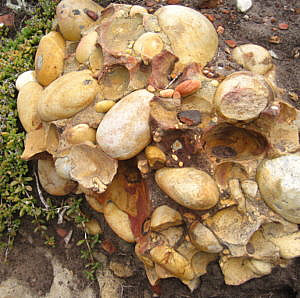 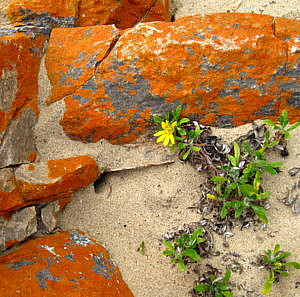 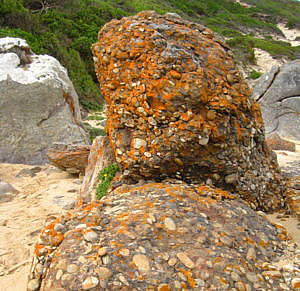 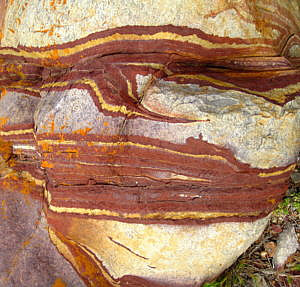 The Robberg Nature Reserve and Fountain Shack are run by CapeNature. Permits are required. www.capenature.co.za Note that whatever gets taken in must be lugged out — and that includes your trash! Unlike our previous occupants, whose heavy iron pot we got to wash and whose garbage bag we carted out along with our own…

If you liked this, we have longer stories about our travel adventures all over the show here