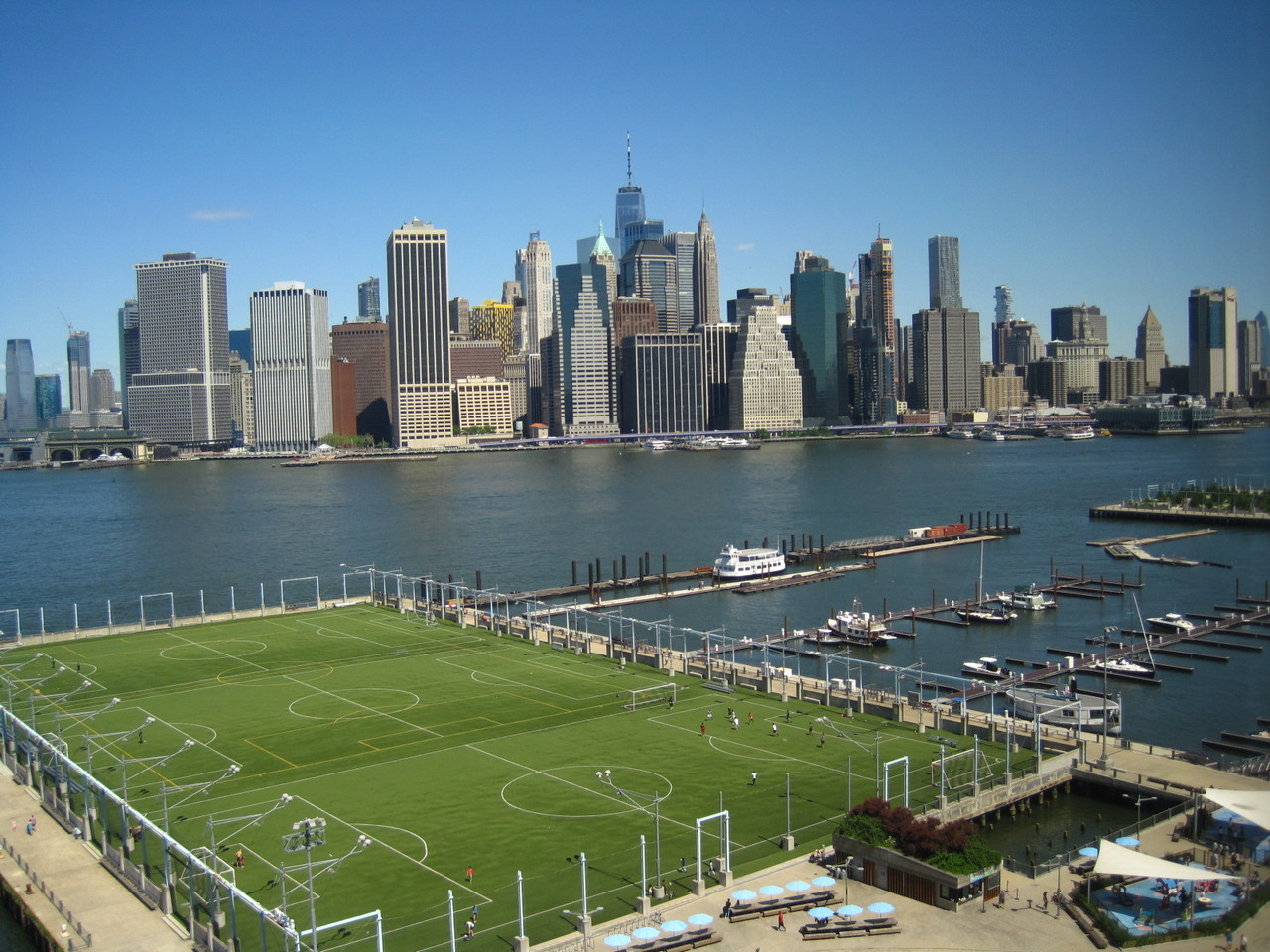 We are very privileged to have (a couple of) friends in high places and it didn’t take much to be persuaded to stay in the “spare downstairs apartment” of one of our friend’s quite substantial abode in Brooklyn Heights, overlooking the East River. It’s just a jump to the right (where have you heard that one?) … a little segue from the Hudson to the East River. The views from the apartment are pretty spectacular. To the left you can just see the Statue of Liberty, behind Governors Island; to the right the Brooklyn Bridge, and in between, the southern tip of Manhattan (the Financial District) with its ever-growing outline of glass-encased skyscrapers. They are seriously changing the topography of the once highly recognisable Manhattan skyline. Above is the view, through the window, from inside the apartment. 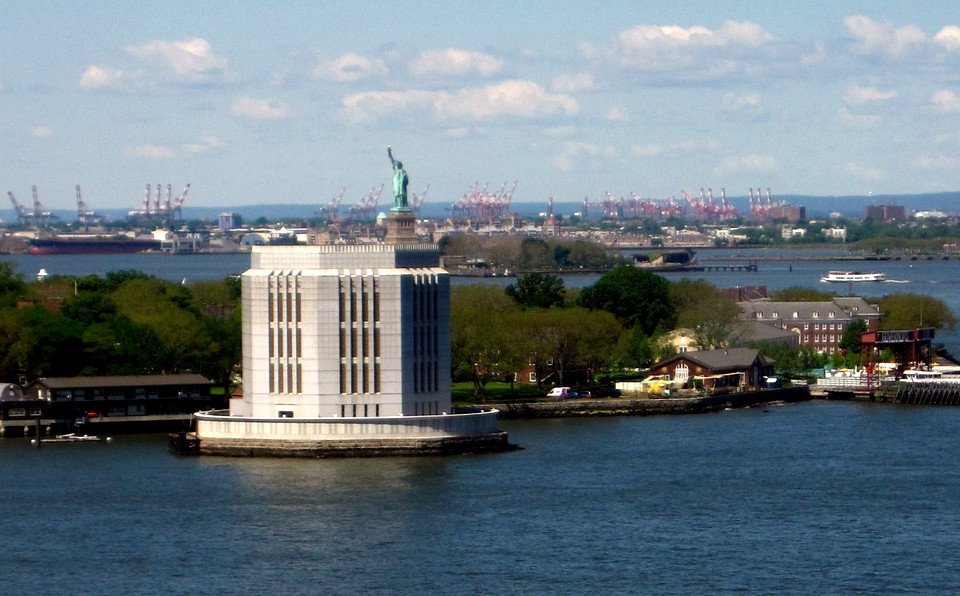 You have to look hard, but there it is, the Statue of Liberty (photographed from the apartment). This part of the East River is fascinating. There is a constant to and fro of vessel activity … speed boats, small fast ferries, big cumbersome slow ones (Staten Island Ferry), long slim barges, all carving white wakes into the water while the helicopters do an ongoing fly-past like hi-tech droning mosquitoes. 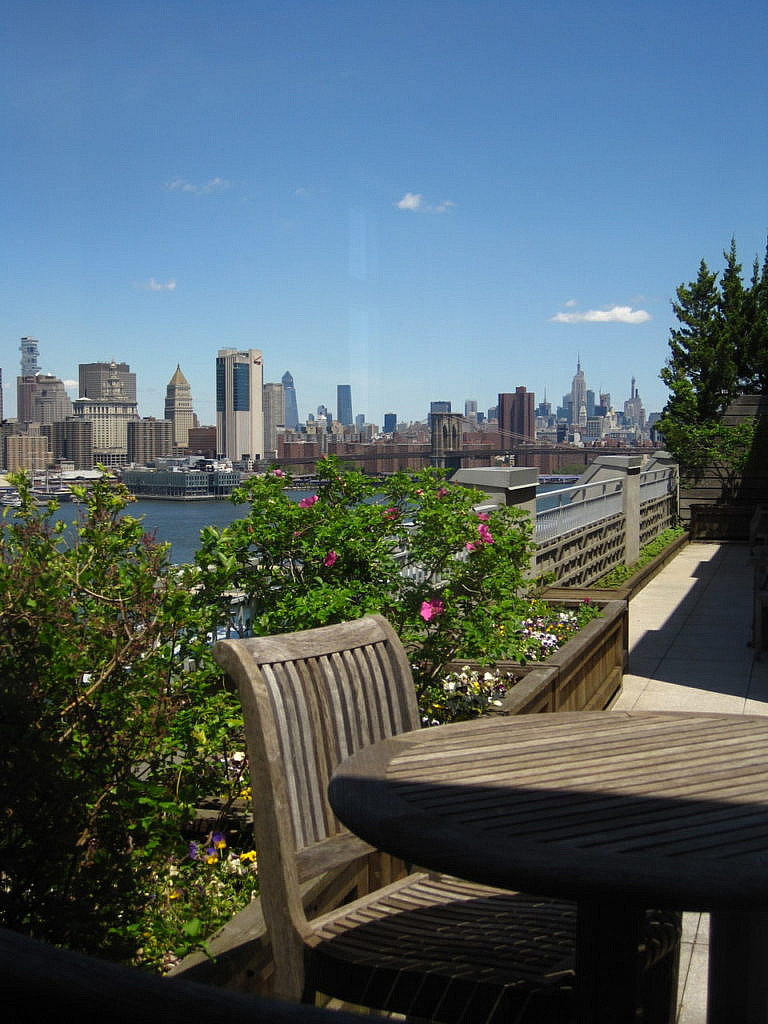 The view from the dining room onto the outside terrace. 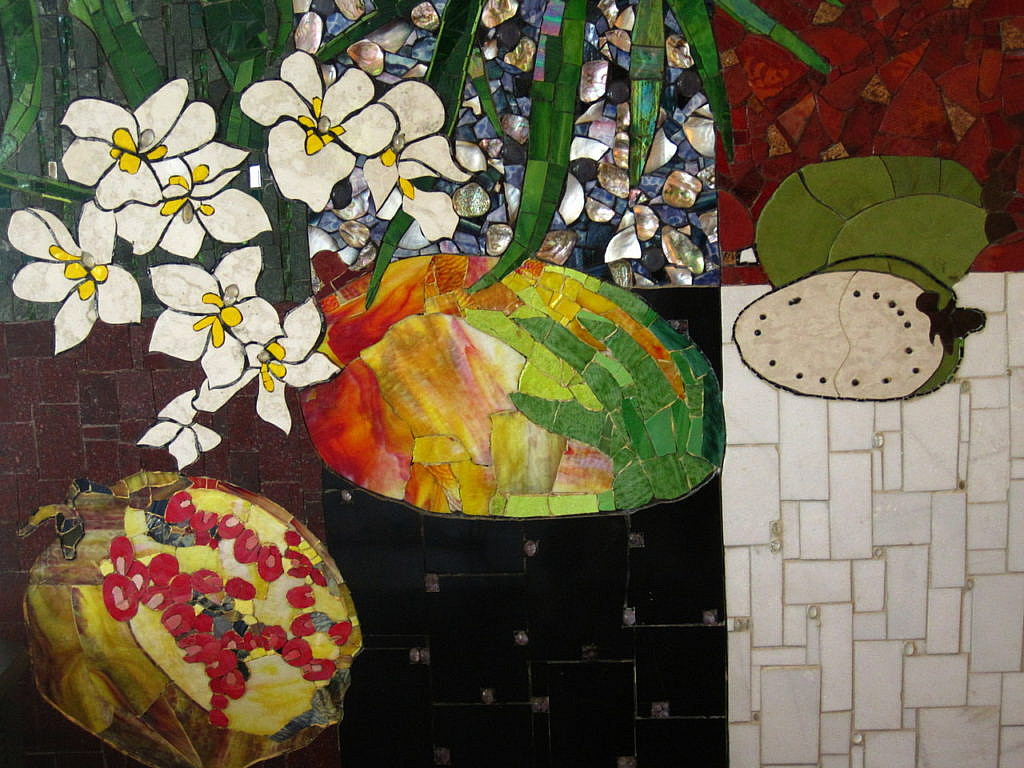 A lovely full-wall mosaic installation, made of iridescent tesserae, in the dining room. It was purchased from one of New York’s most well-known chefs, Danny Meyer (restaurants include Union Square Cafe, Gramercy Tavern and Shake Shack), after he closed one of his restaurants. 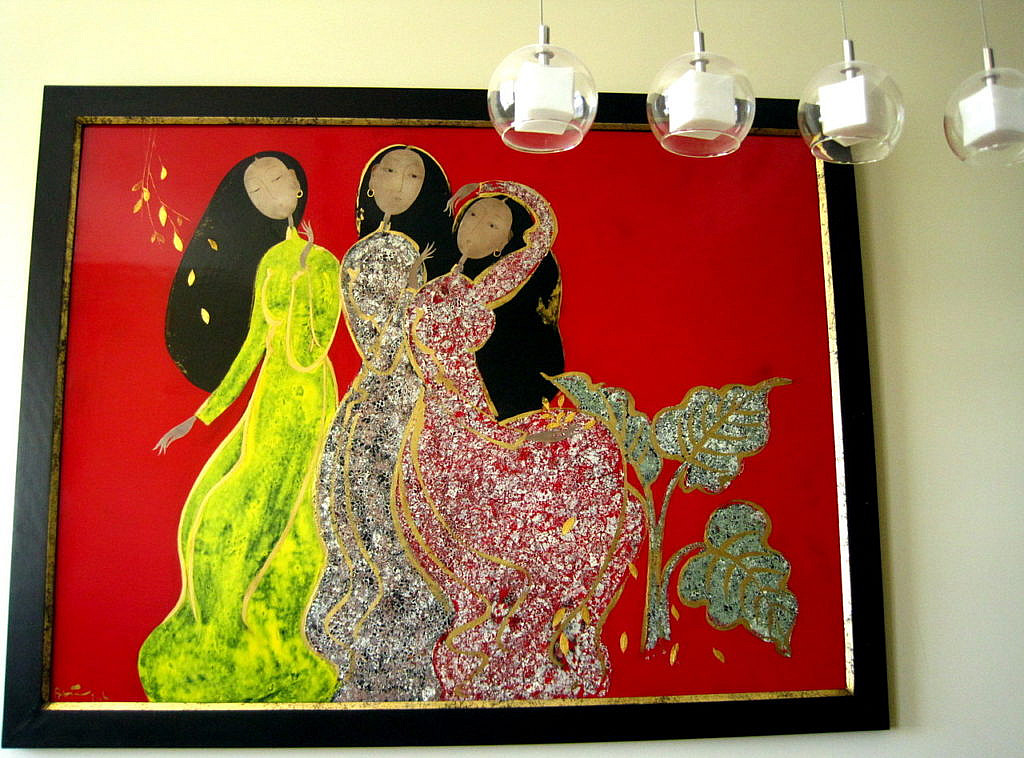 One of my favourite paintings in the apartment, by a Vietnamese artist.

Then it was time to go to Ristorante Morini (which Hirsh has written about in great depth), and because the day was so gorgeous — summer at last! — we took the ferry from the foot of the Brooklyn Bridge to the mainland. It trawled the edges of very trendy Dumbo (believe it or not, Down Under Manhattan Brooklyn Overpass) and Williamsburg, before cutting over the river to the United Nations building in the Financial District. Both Dumbo and Williamsburg have become hip and happening zones, with characterful cobblestone streets and converted red-brick warehouses. 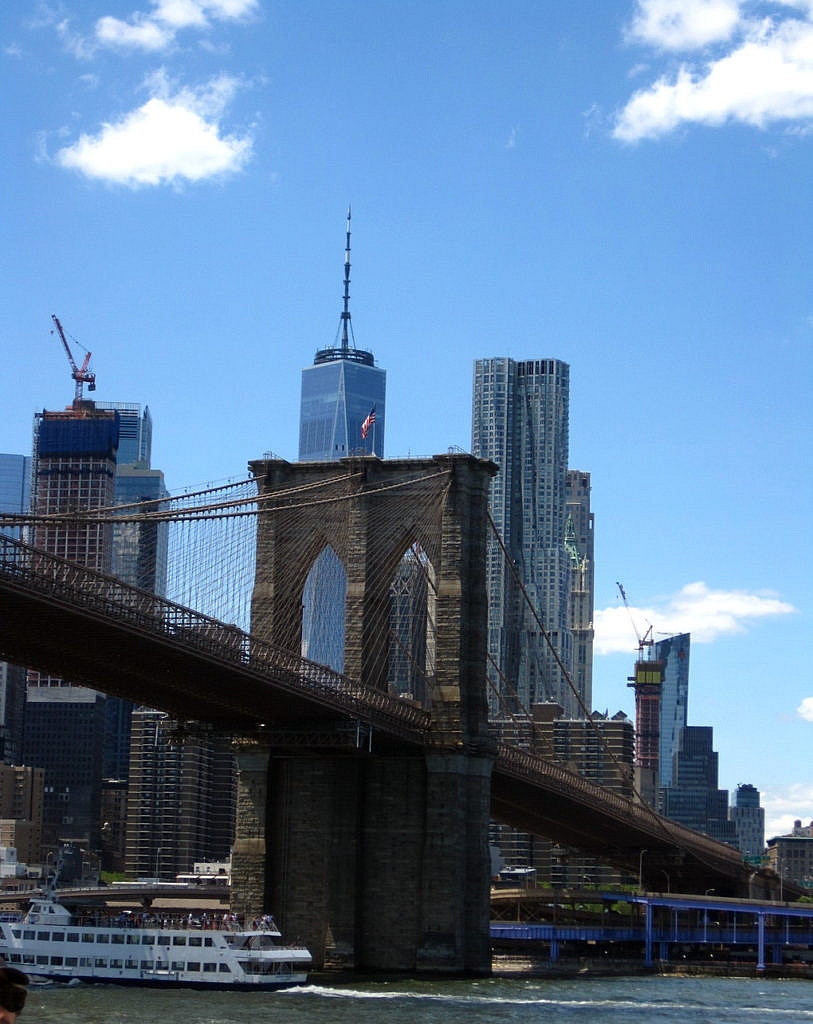 Above  Behind the struts of Brooklyn Bridge are, to the left, the spire of Freedom Tower at World Trade Center, and to the right, the wavy shiny frills of a Frank Gehry building that was, in its time, hugely avant-garde. Today, next to the burgeoning multi-faceted towers, it looks positively mundane. Sorry, Frank! 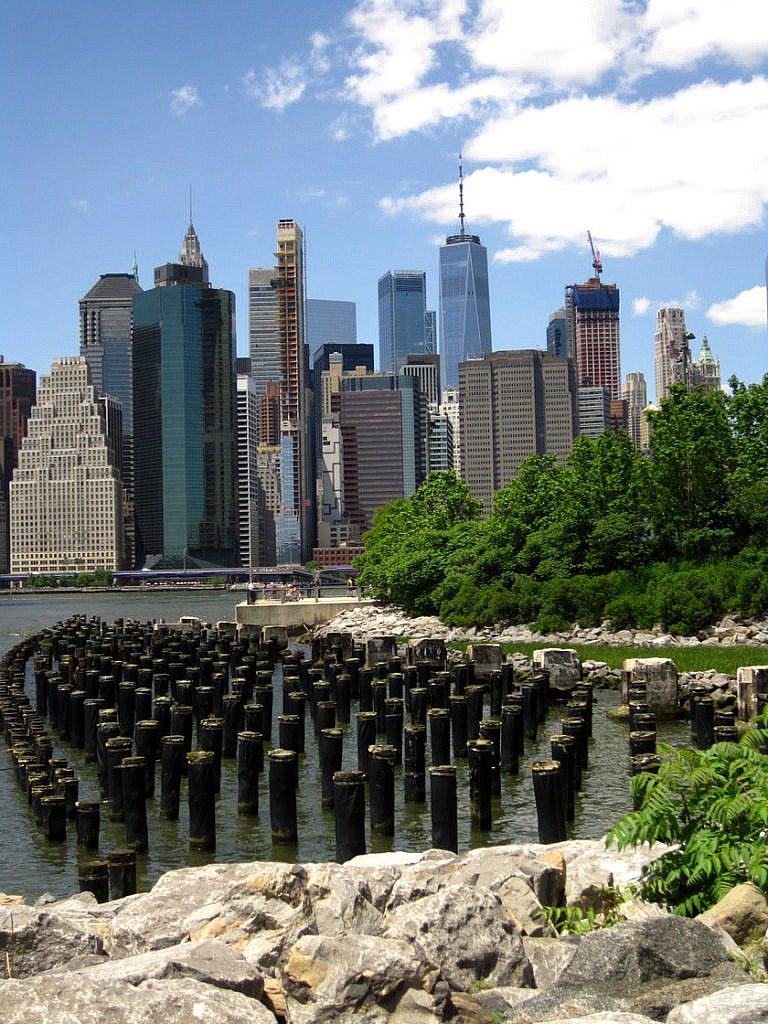 Before catching the ferry, we walked through the park and landscaped walking and cycling paths of Brooklyn Heights. Unbelievable the work and effort and creativity that’s gone into this. Here, a view from Brooklyn to the Financial District. The river has also been sufficiently cleaned up for a new project to take hold — the cultivation of a healthy population of oysters. Not that I’d take the chance, but anyway. 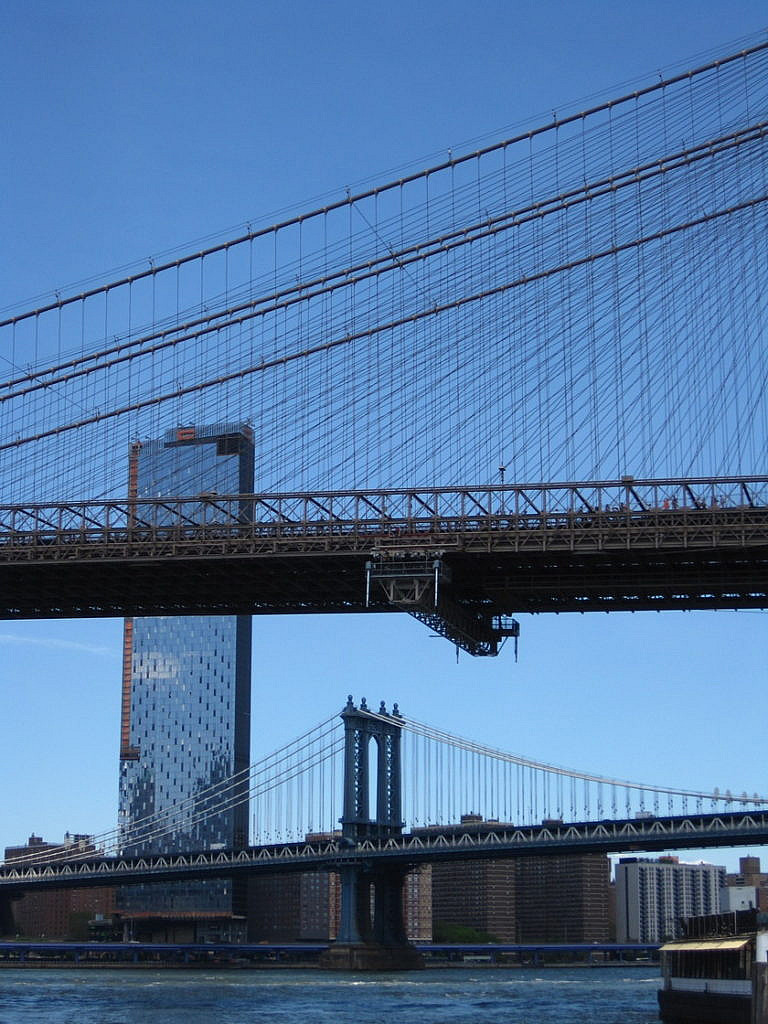 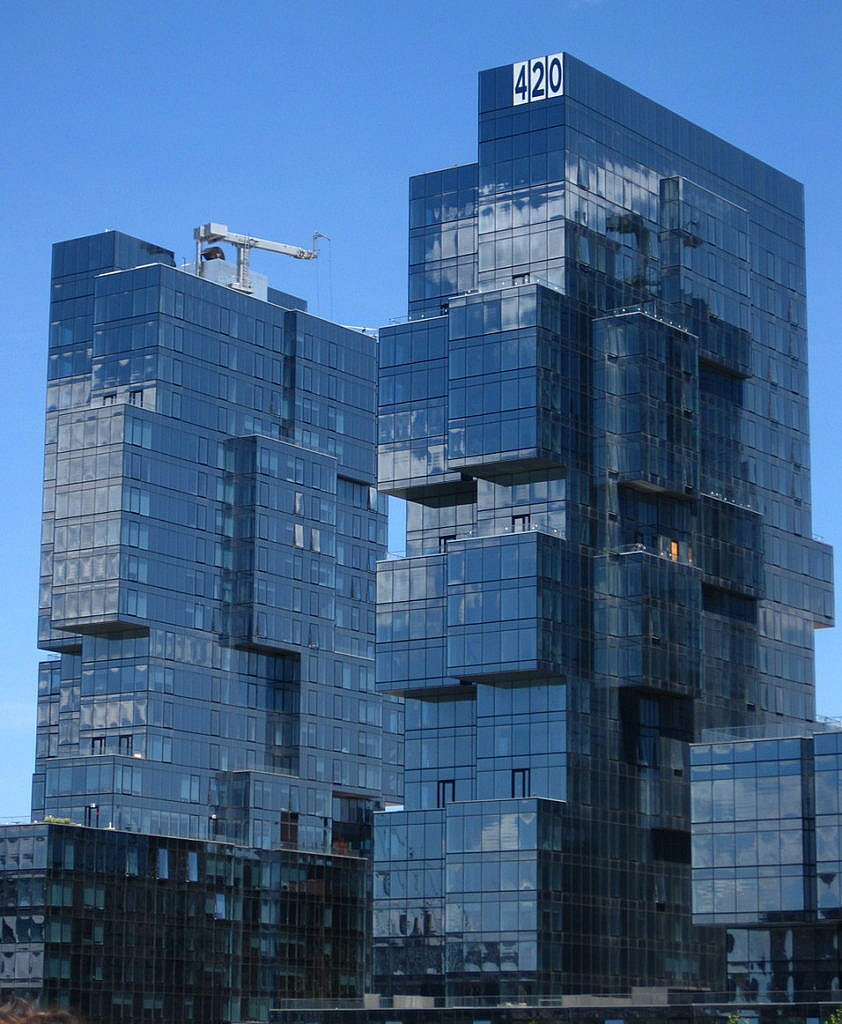 Above left  Passing under the Brooklyn Bridge and looking towards the Manhattan Bridge; there are some very fancy apartment buildings along the way. 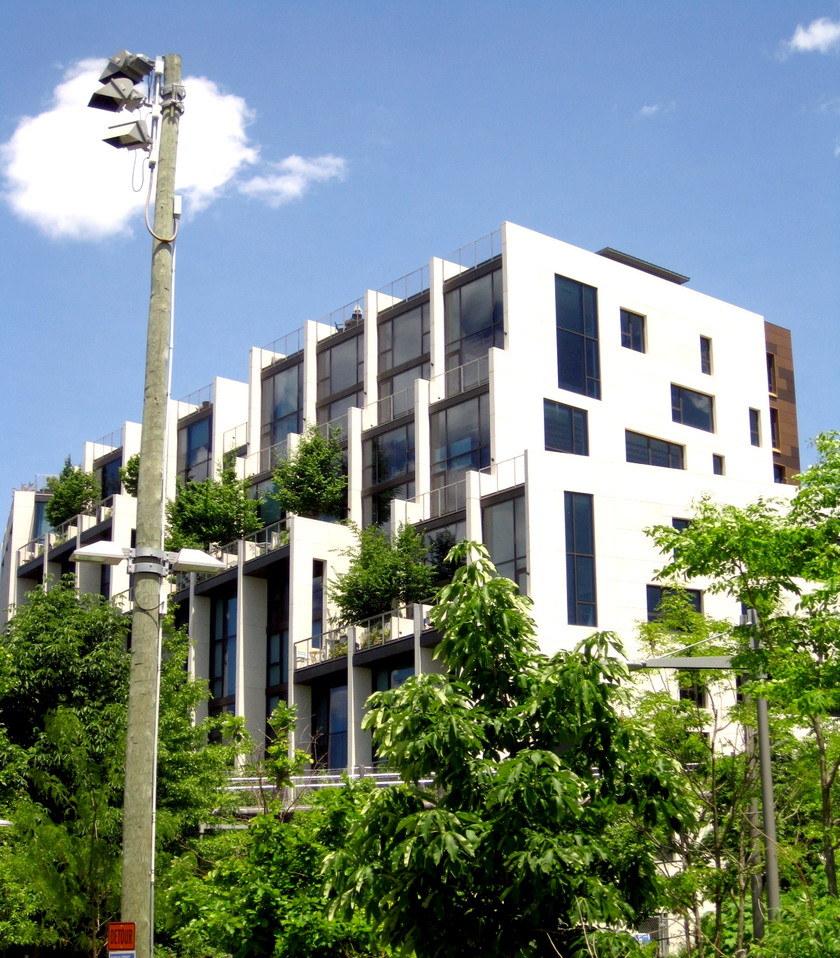 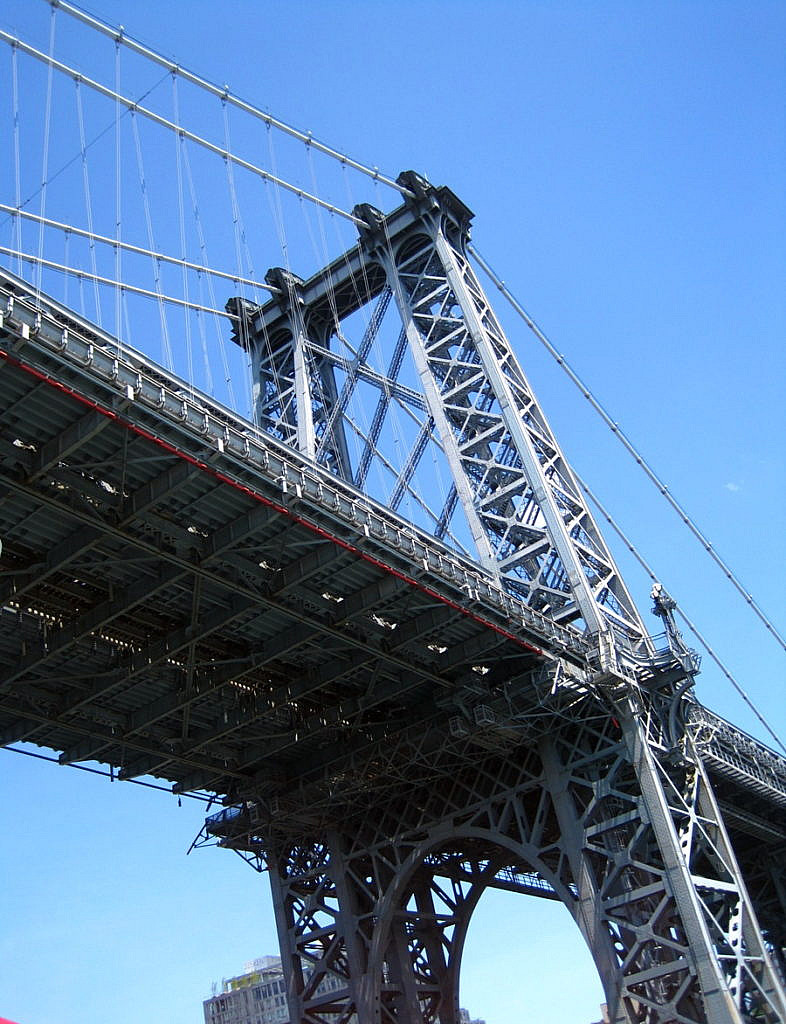 More chi-chi apartments, and above right, cruising under the Manhattan Bridge. 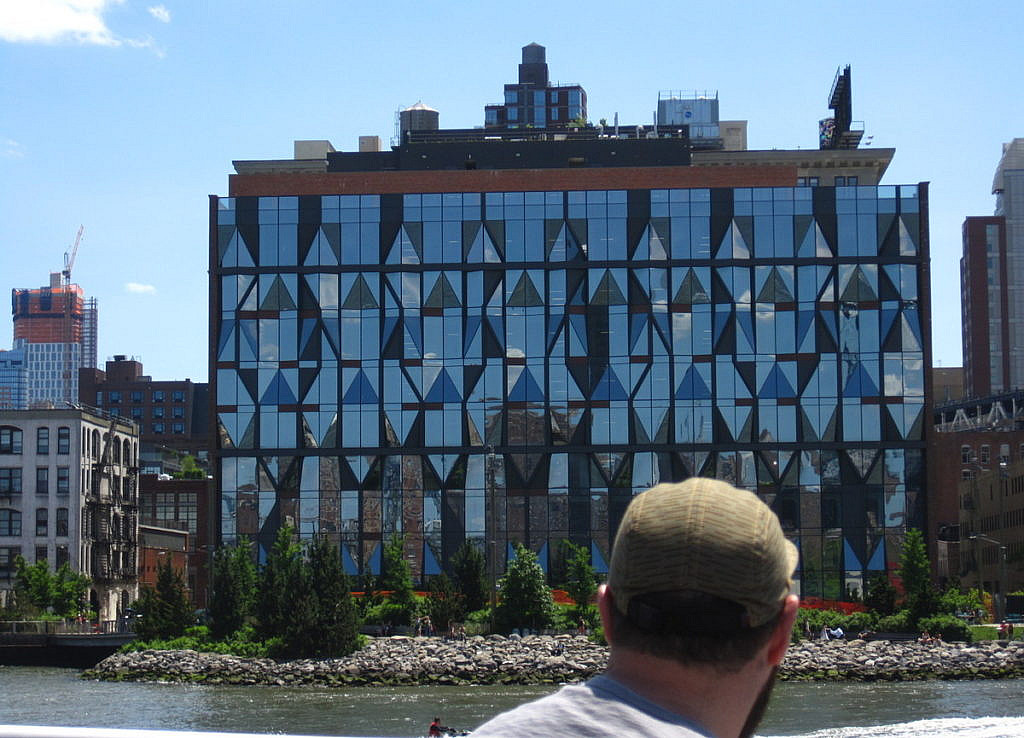 Impossible to cut out the heads on the packed ferry, but another imaginative apartment block. 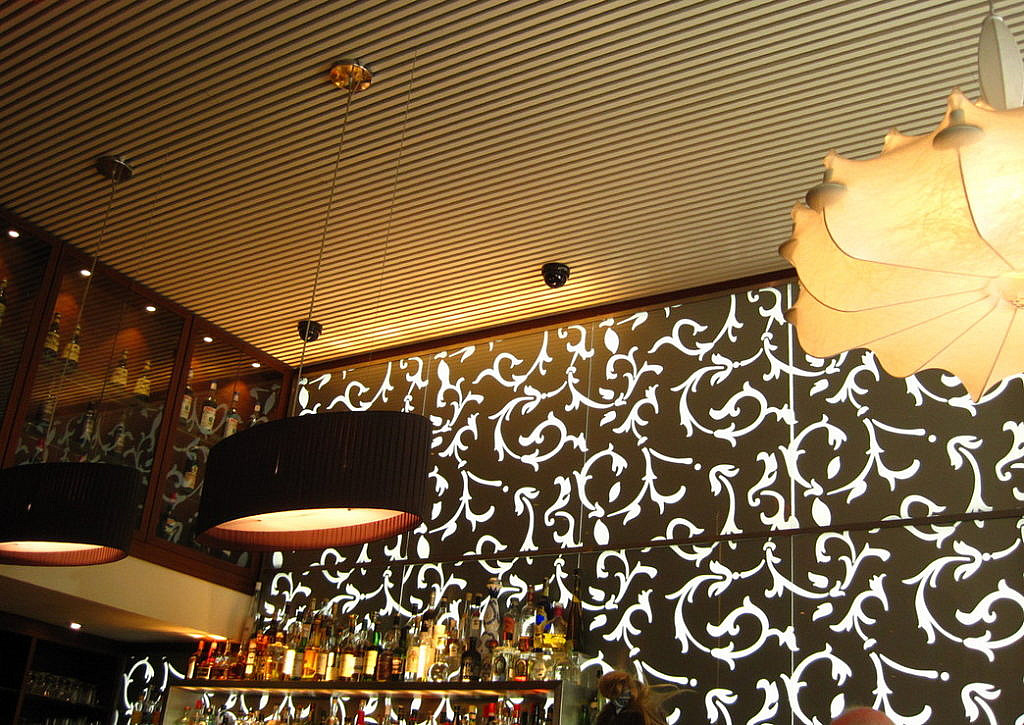 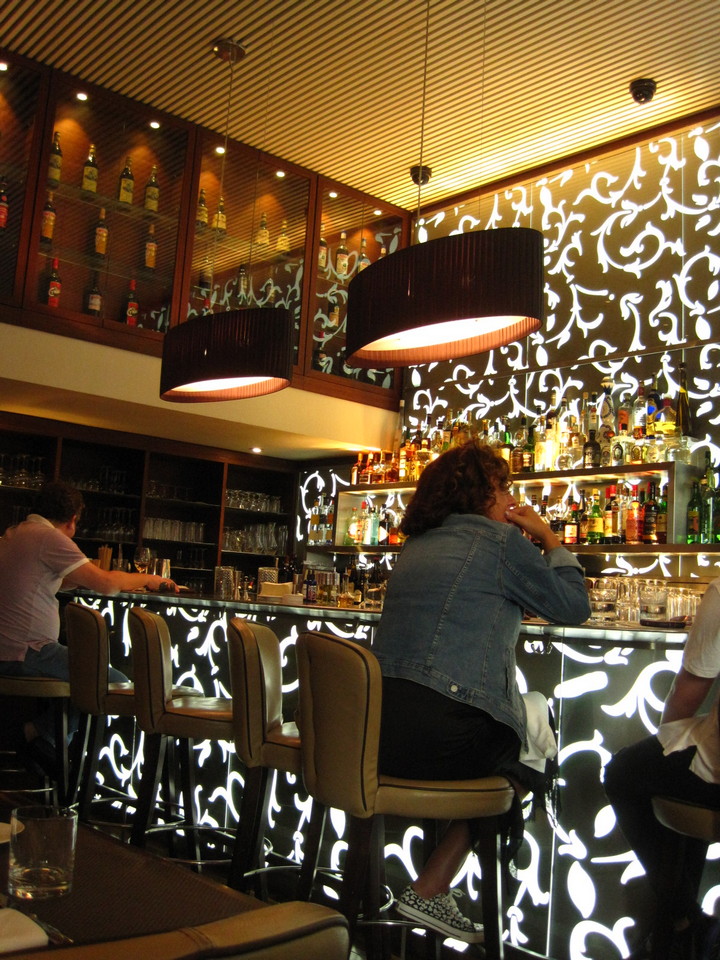 To end, a Brooklyn sunset through the window of our apartment 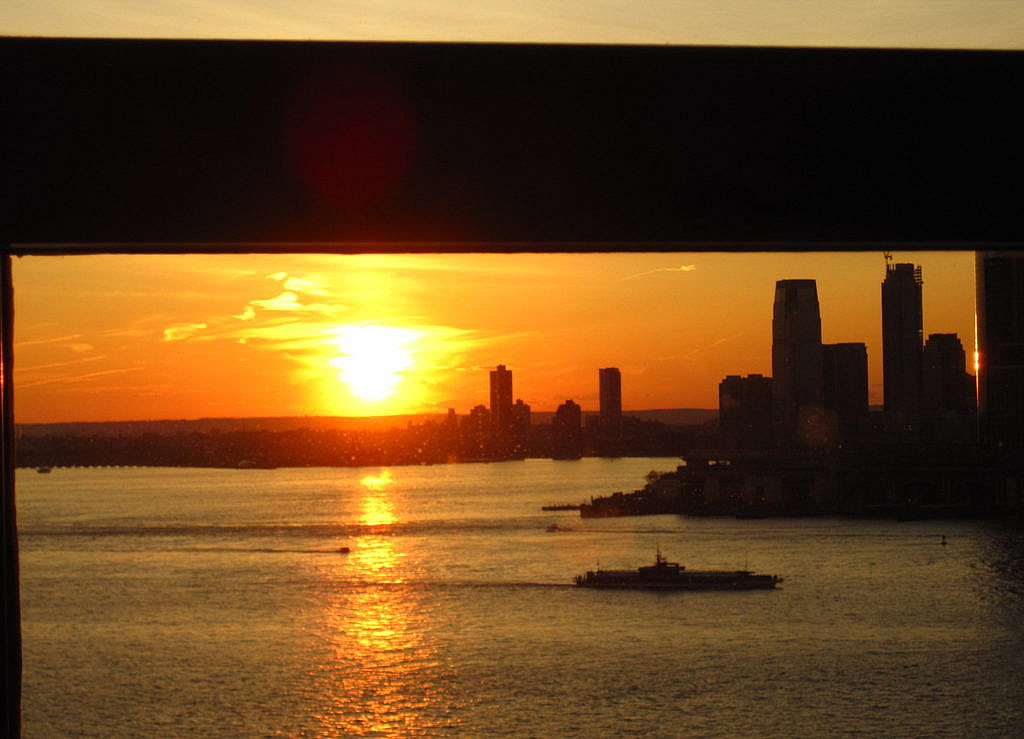