It’s goodbye Prague and hello Berlin. Which brings on some musing and introspection into our week-long stay in this city. Firstly, the really excellent choice (well done, Hirsh!) of the area we’re staying in, Karlín, just to the right of the Old Town, Staré Mĕsto, and on the south side of the river. Although filled with residential buildings, there are also plenty of very different restaurants frequented only by local young yuppies. Think hip coffee shops, an avant-garde industrial-style restaurant with an army of young chefs, a superb Asian place called HongKong, bakeries with great coffee and delectable pastries — my favourite a shortcrust-like pastry filled either with almond or poppyseed paste. 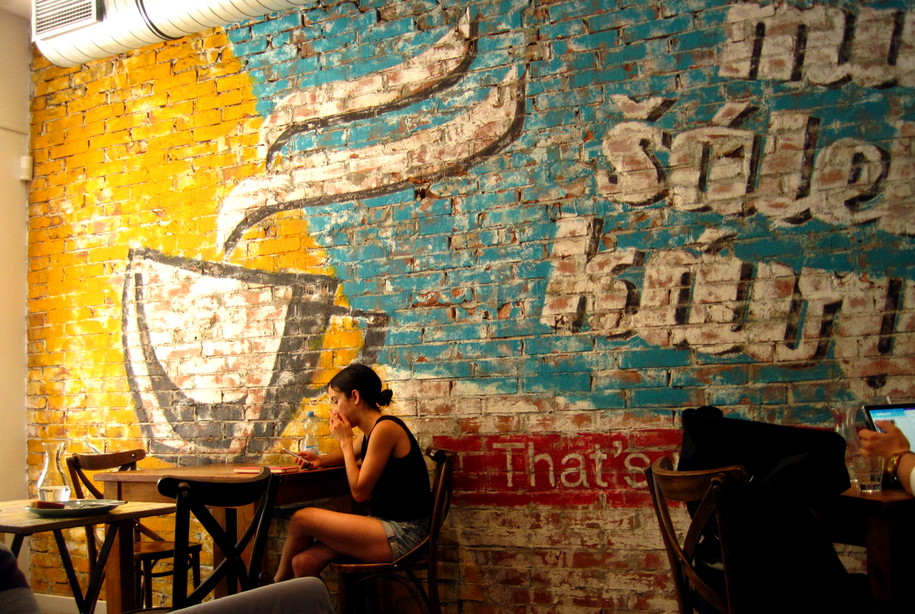 Above is one of our trendy local hangouts, with good coffee, craft beer and Czech and Austrian wines by the glass. We sat a couple of times on the pavement area outside in the early evening, watching life go by. 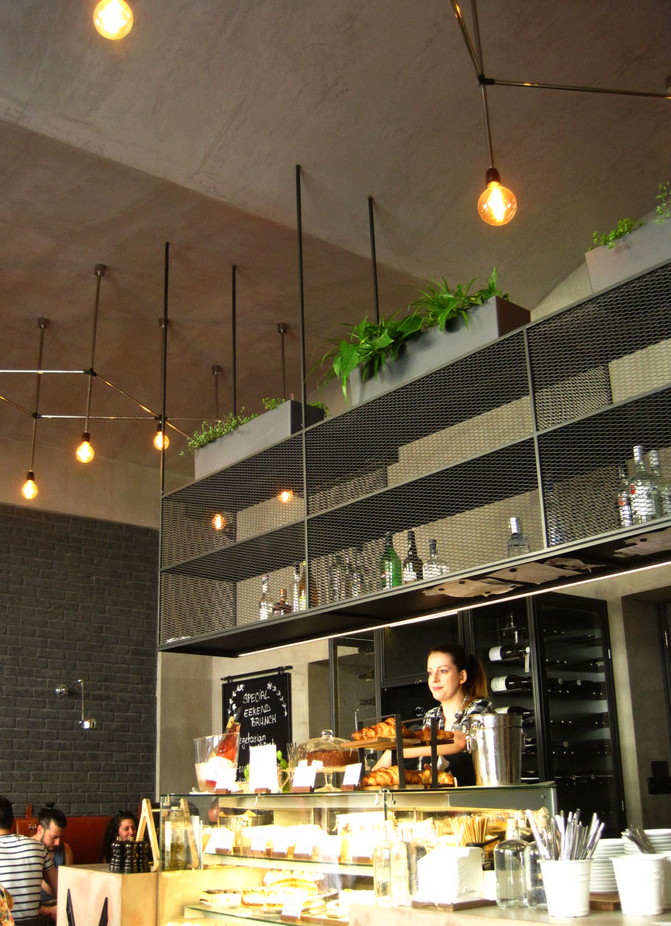 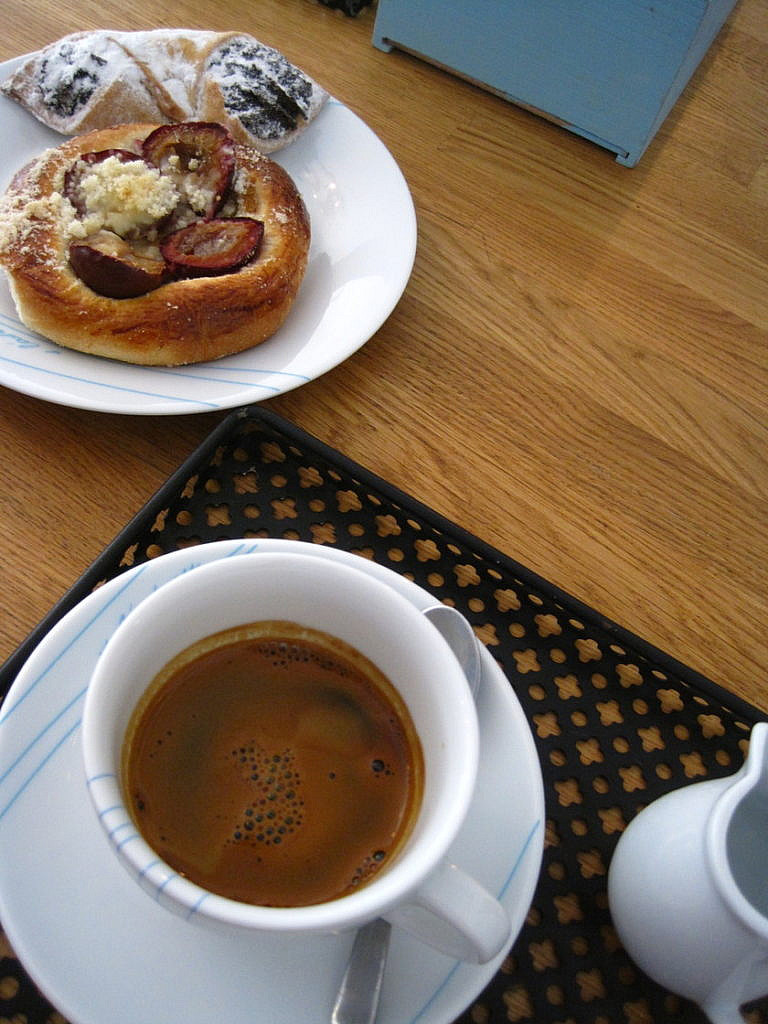 Another modern, elegant restaurant/coffee bar in the Old Town. Above right a plum pastry and a poppyseed confection. 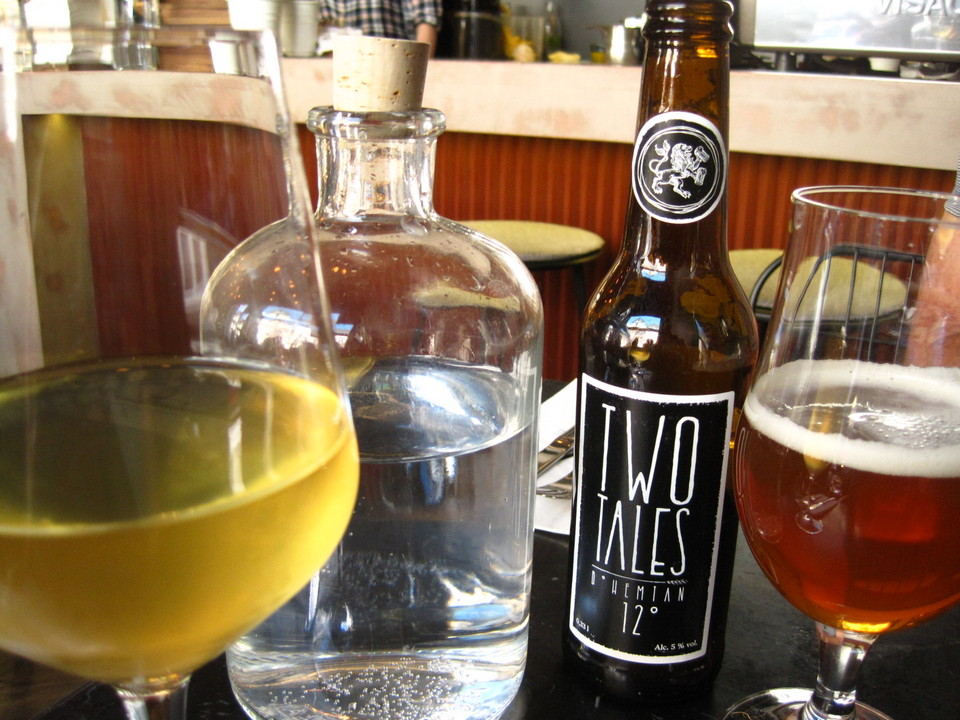 Which brings me to Prague’s excellent coffee, wherever we went. Great strong aromatic espresso. But also The Bread. Oh, the bread! Prague has perfected it. There are huge selections of rye, wholegrains, campagne, seeded . . . always soft and chewy on the inside, crusty and crispy on the outside.

Moving on to the body ink. Every single young hip individual has a tattoo (most times, many). It’s not uncommon for entire arms or legs to be covered in colourful designs. Or sometimes just black ink. I saw a woman with the entire lower half of her leg inked black, like a knee-high sock. The hairstyles are interesting too. A current trend is to shave the lower part of the scalp, then pull the hair on the upper part into a man bun or a ponytail. No denying that the Czechs have a sense of individual style.

Another hugely evident trend … the proliferation of pregnant women. Prague’s having a Baby Boom! Every second young woman is sporting a protruding belly and/or pushing a baby carriage. 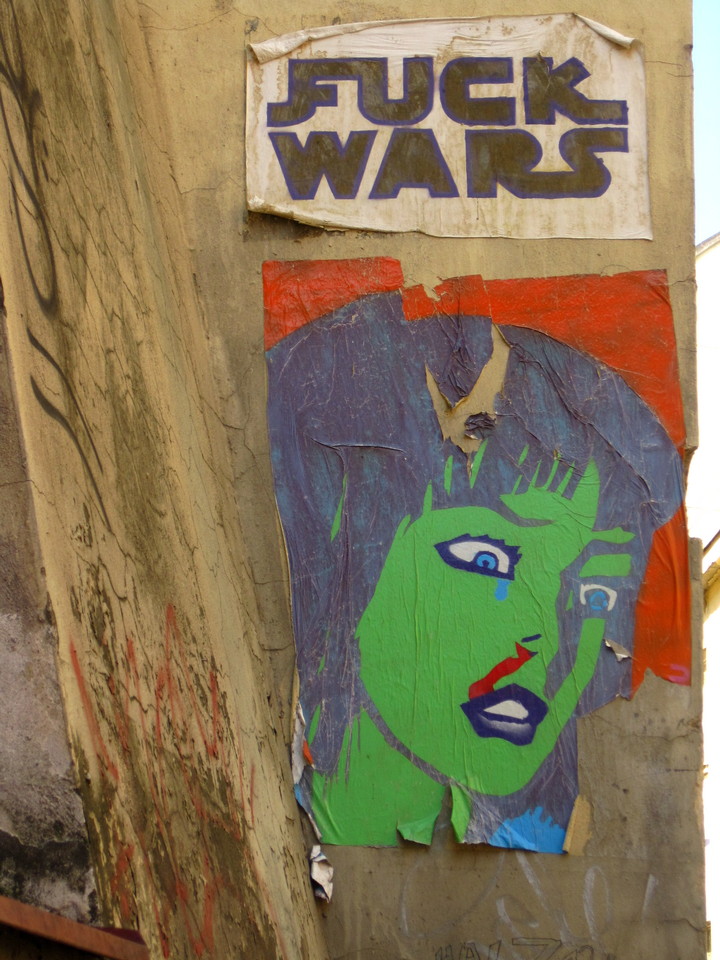 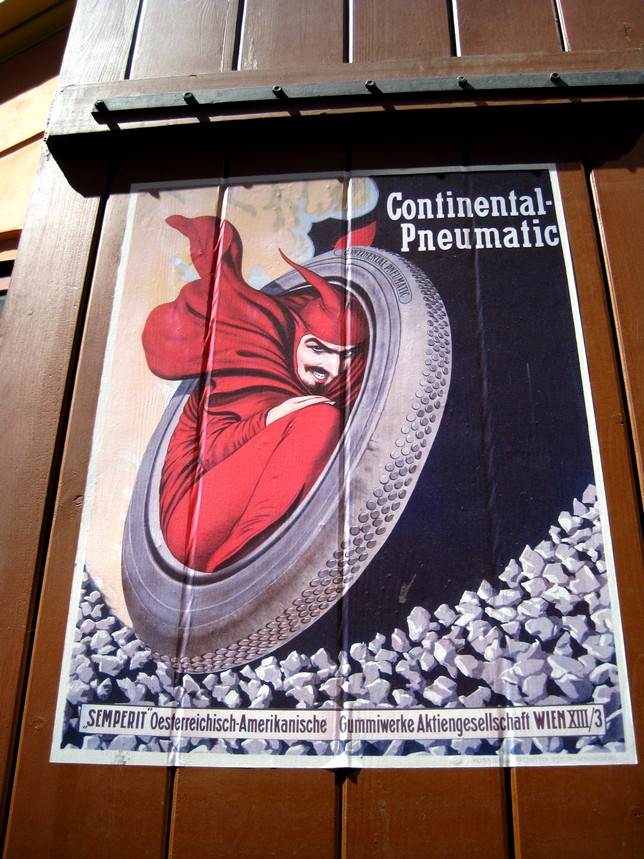 I don’t have evidence of tattoos or hairstyles but I give you poster graffiti instead. 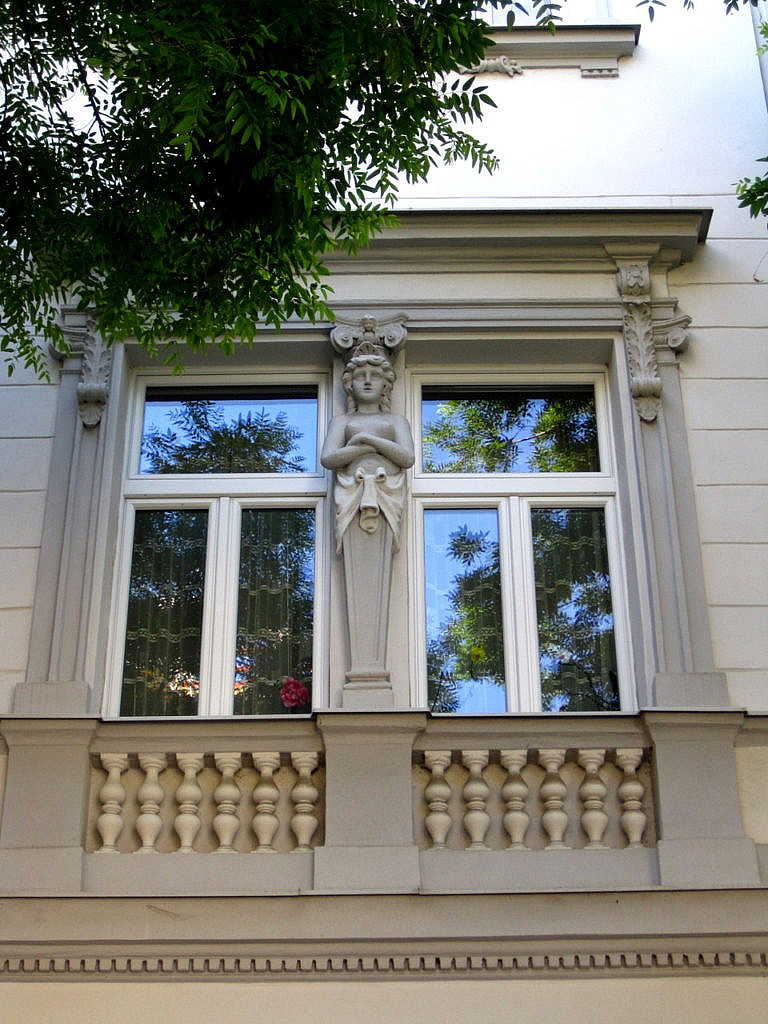 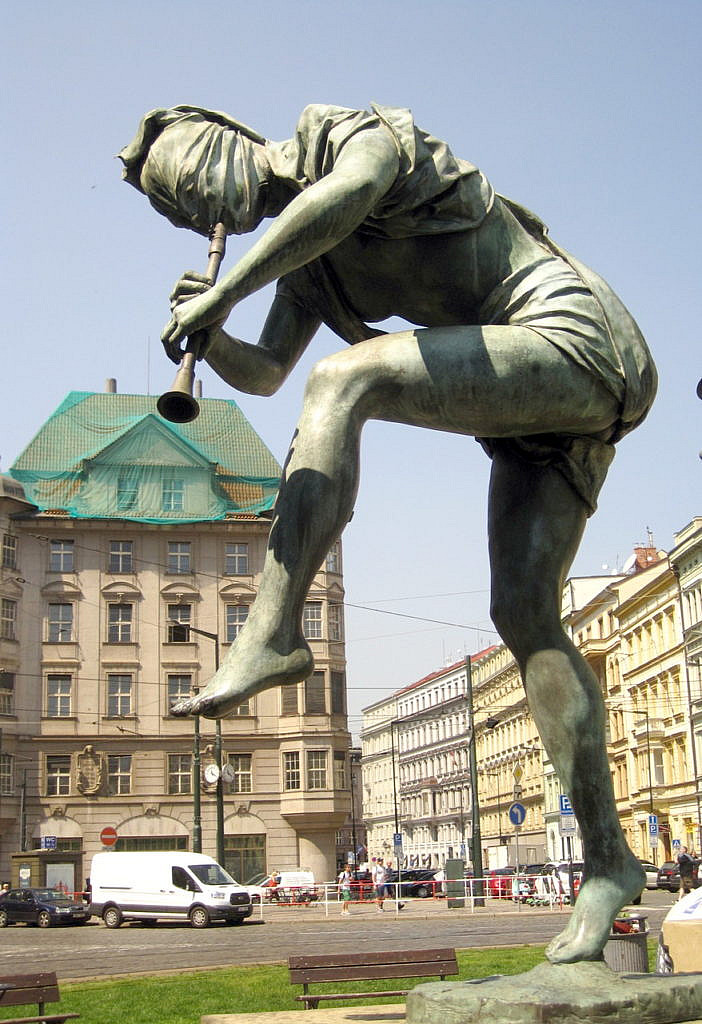 Finally, there are the Cottonwood trees. Now I understand how they get their name. Wherever we walked, even within the city, there’d be ephemeral bits of fluff wafting in the air or sitting gently on your skin. Along the riverbanks, cottony clumps are piled up under the trees like the stuffing that’s escaped from a couch. When you walk through it, white fluff whirls into the air around you. They are the seeds, which have lots of tiny hairs, of the Cottonwoods.

And now just a few glimpses of our last day in the city. 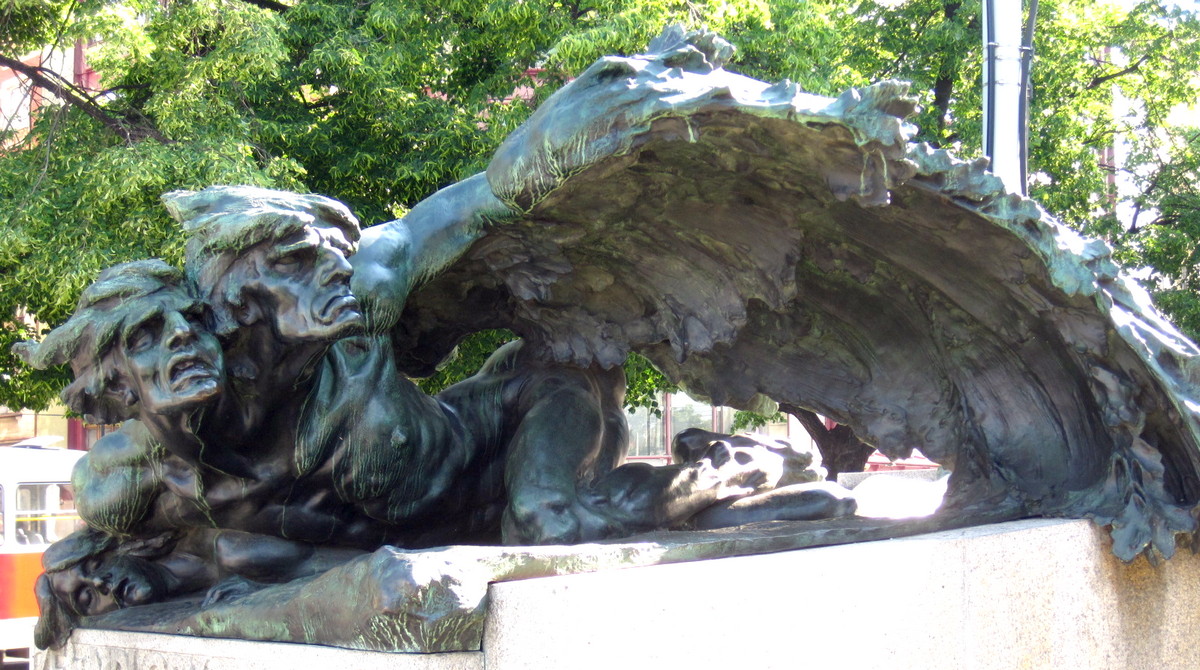 This was in a square called Charles Park, with no informational evidence of the sturm und drang that is clearly being represented. Prague has a complex history and a turbulent one, so I suspect it has something to do with the Hussite Revolution. Too complicated to go into! 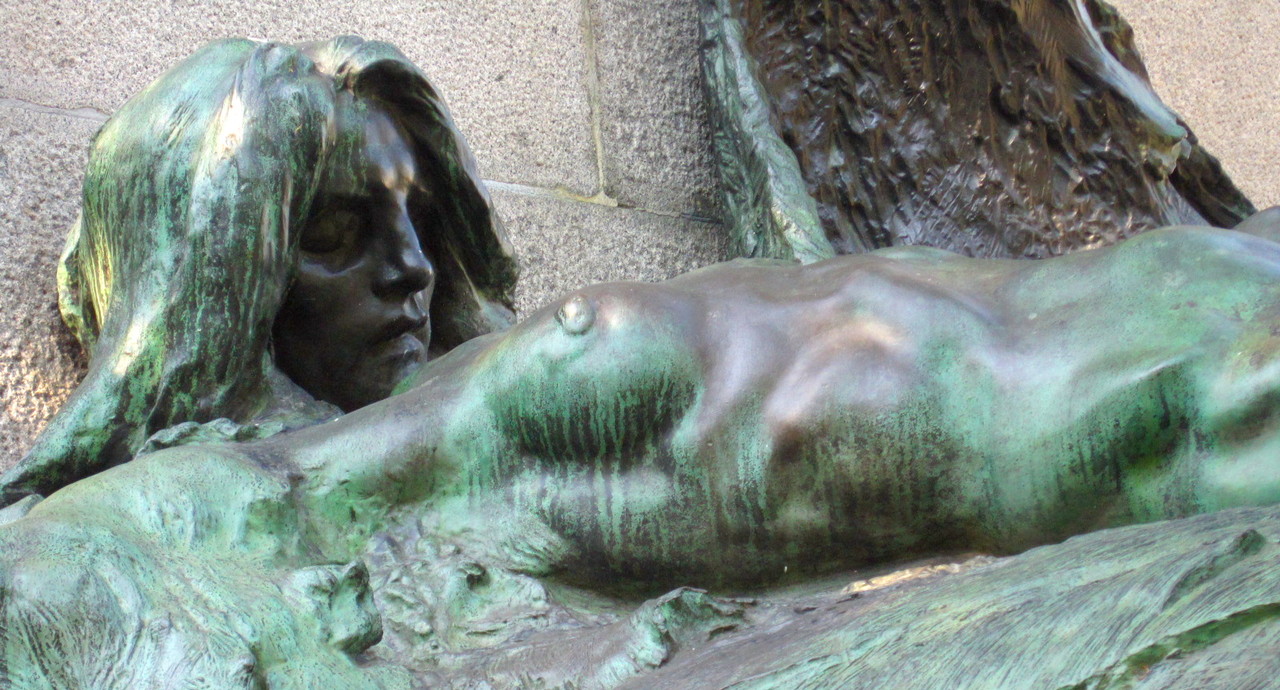 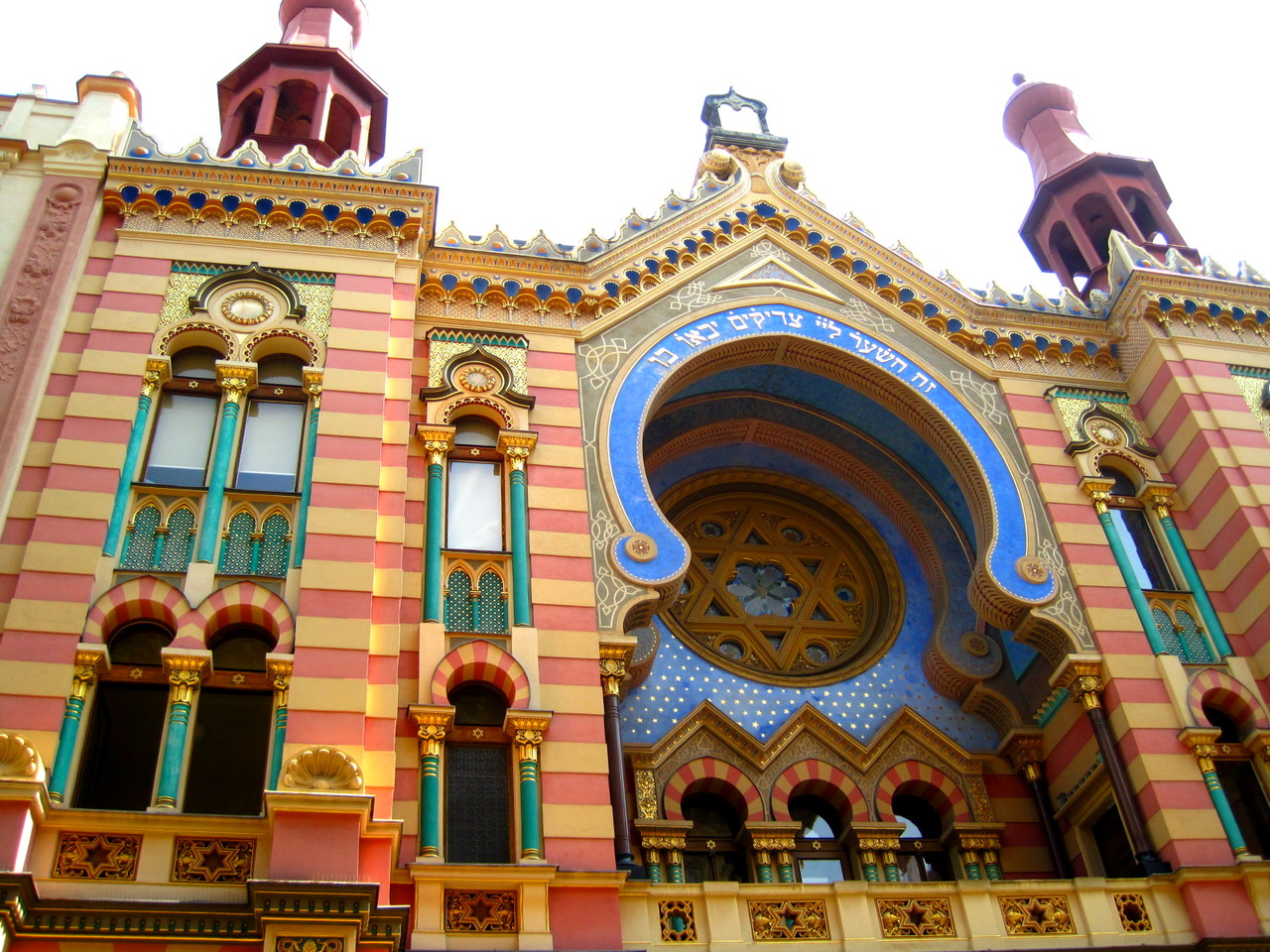 Talking of turbulent histories, we discovered that the Jerusalem Synagogue — strangely sandwiched in between a row of buildings down a hidden side street — is possibly as elaborate as the Spanish Synagogue we were grinding our teeth to have missed. The architecture is an interpretation of both Art Nouveau and Moorish styles and the interiors are impressively ornate. 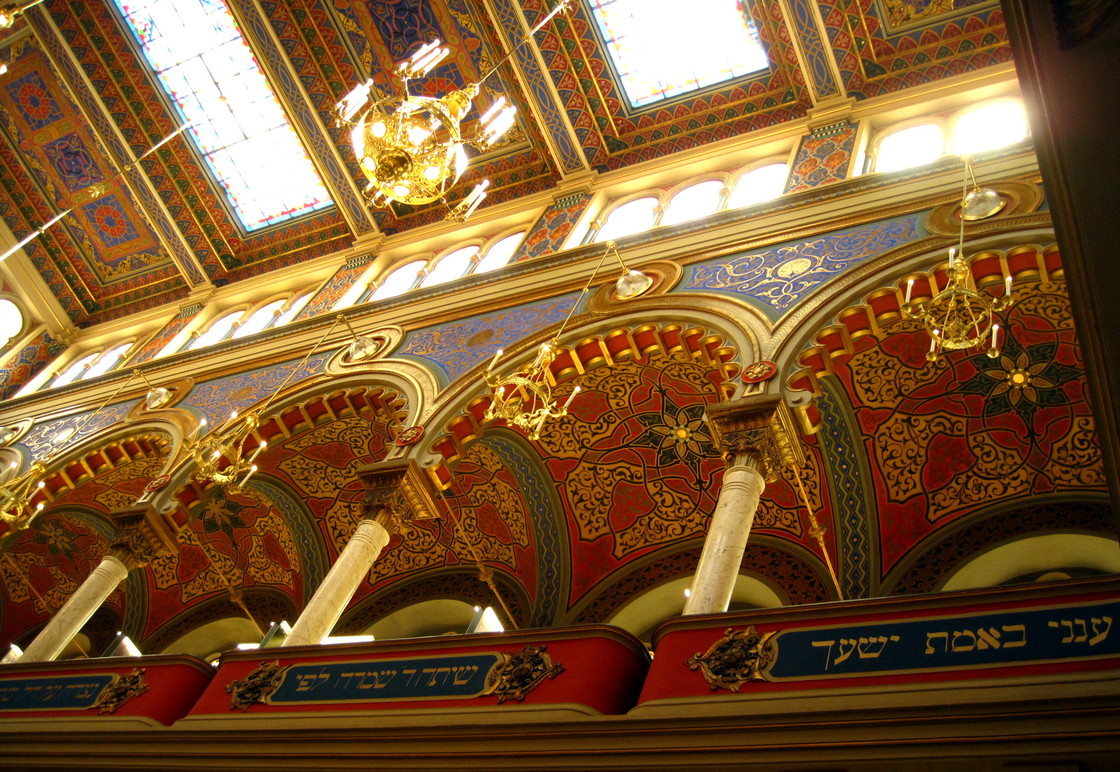 The tragic story of the Jews in Prague is that most of them were killed in the Holocaust, and those few who survived fled the city. There is a Jewish Cemetery in Josefov, the Jewish Quarter, which was never filled because they all perished in the concentration camps. 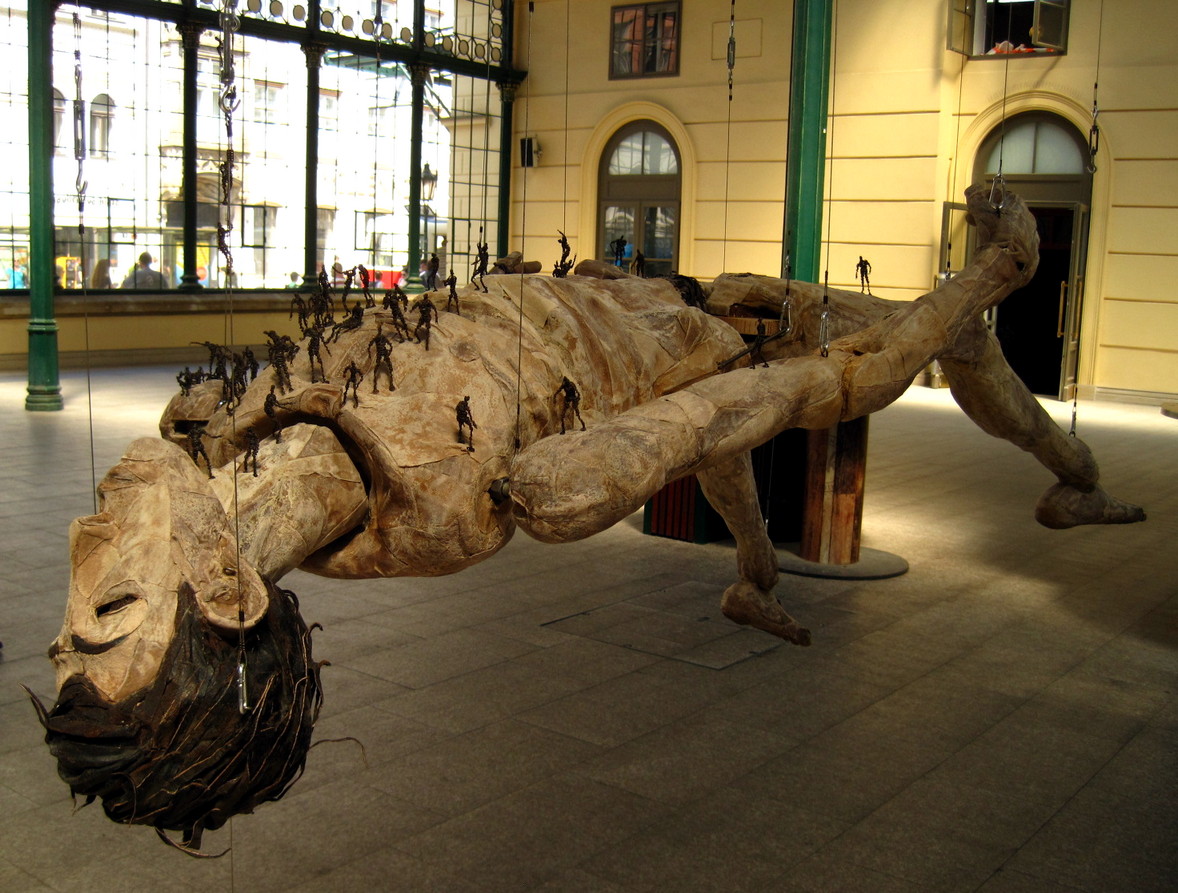 We discovered this installation in the Regional Train Station in Prague’s centre. 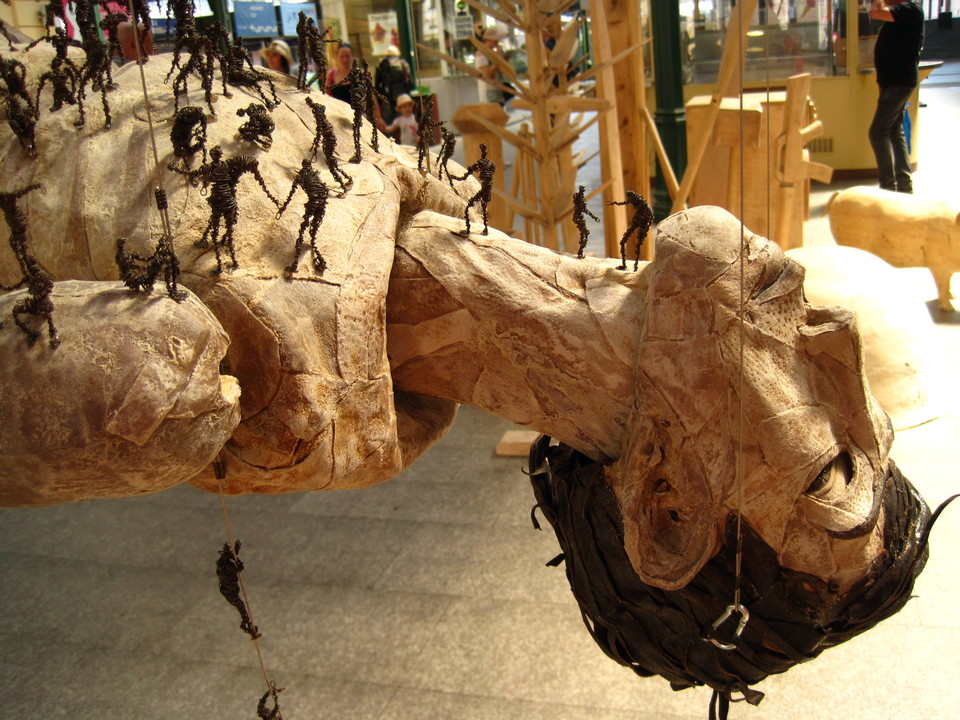 Tiny figures are climbing all over him and belaying from his body. Most intriguing. 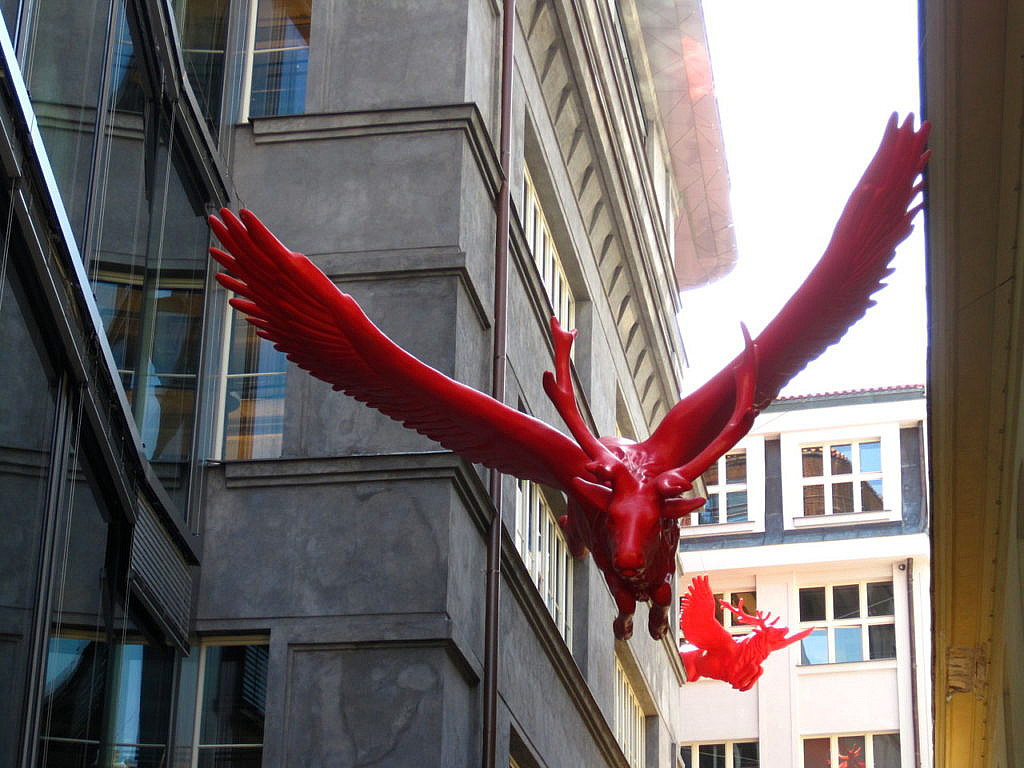 I later discovered that these flying reindeers (?) or elks, suspended between buildings, are in fact the logo for a Czech vodka! 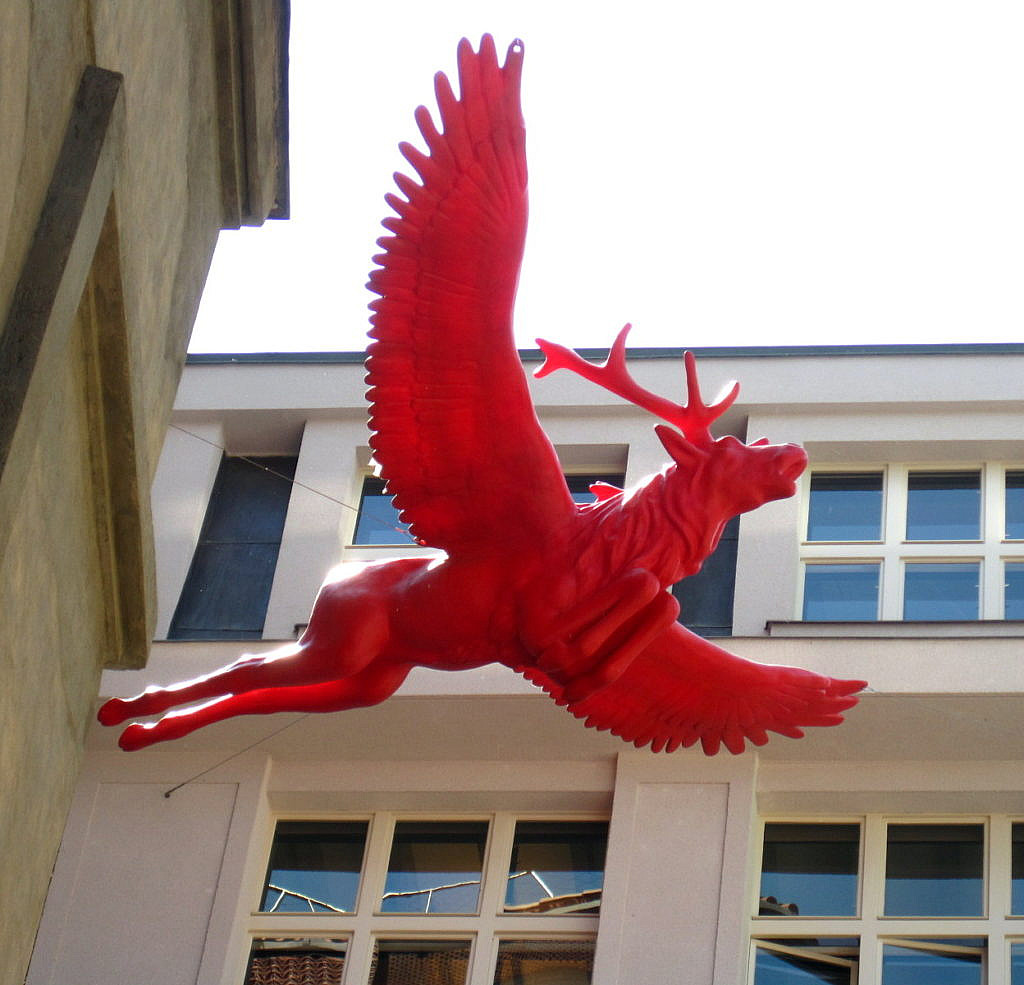 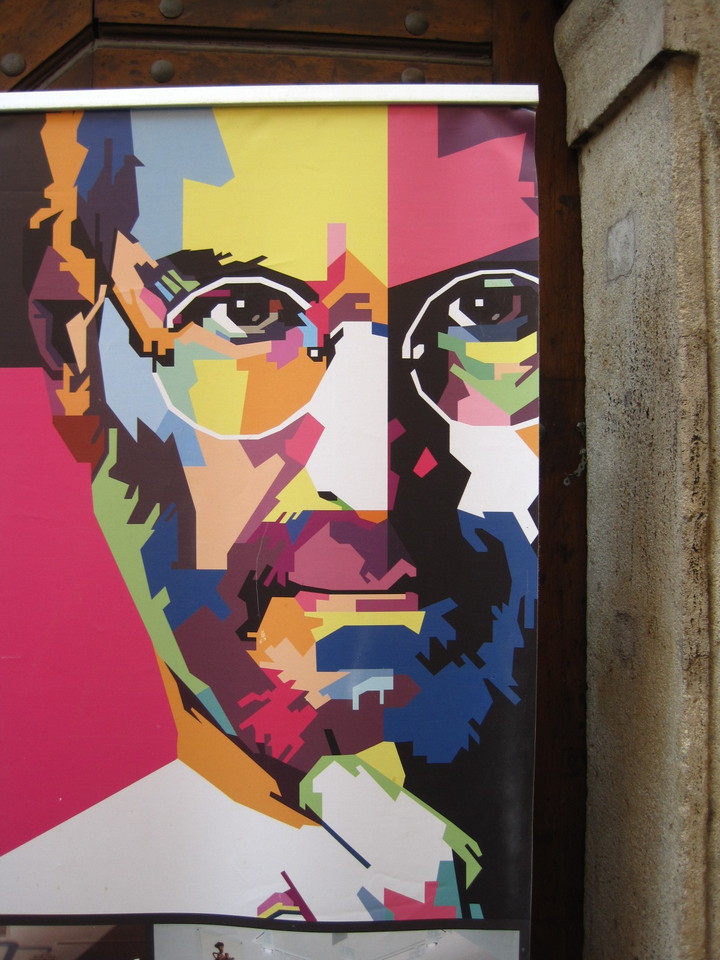 There was also a Steve Jobs / Apple exhibition in town. 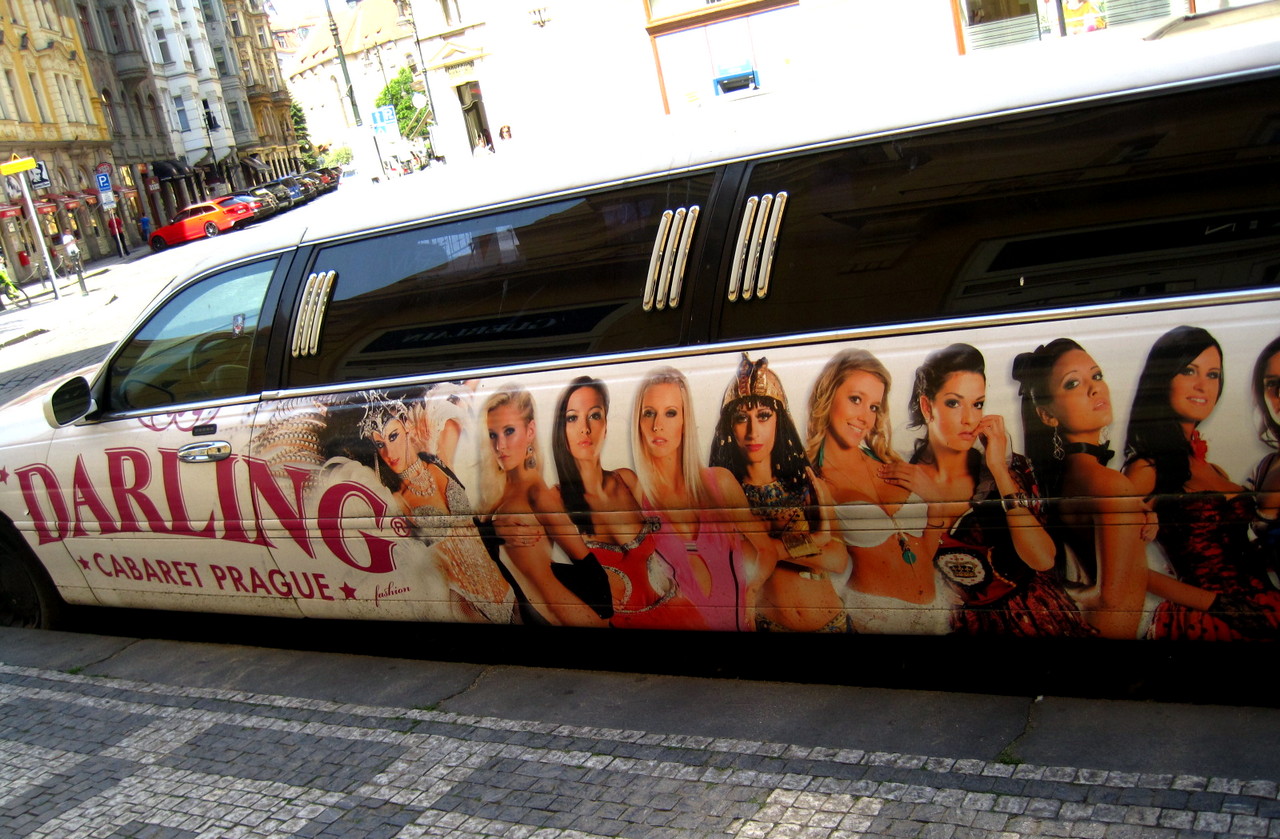 Just some light-hearted fun after all the seriousness … And more fun below, my collection of Prague Chinamen. 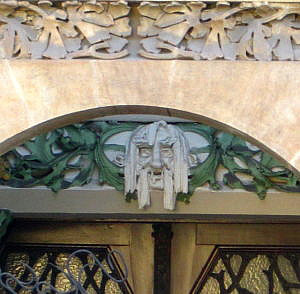 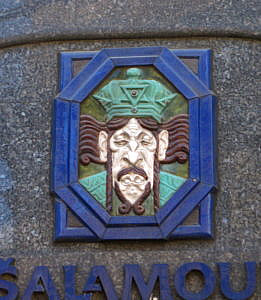 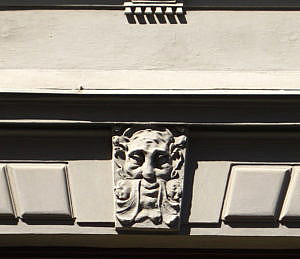 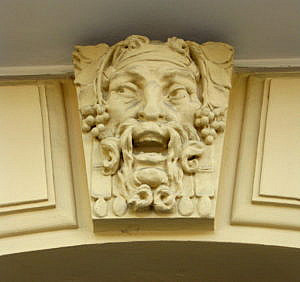 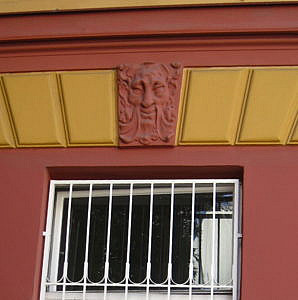 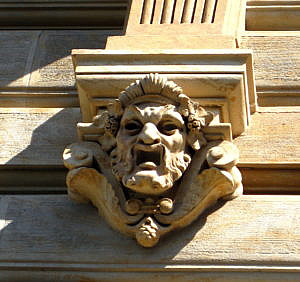