Considering Berlin’s history, there is not an enormous amount of charm to the city’s buildings, even while it is constantly transforming with more and more modern architecture grazing the skyline. Make no mistake, construction is BIG business right now. You can’t land in any of Berlin’s many different neighbourhoods without encountering the cranes and the razed building lots and red-and-white tape and hoarding. But every now and again, something stands out. 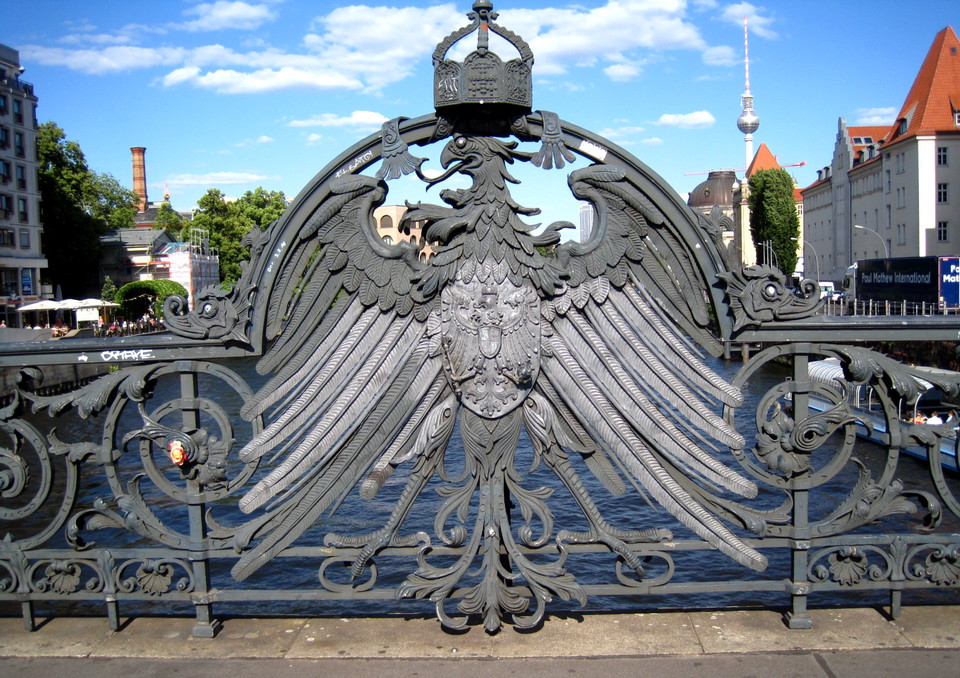 Nothing says Federal Republic of Germany louder than the black eagle, wings widely extended. This is on a bridge across the ever-present Spree River, which can be very tranquil. 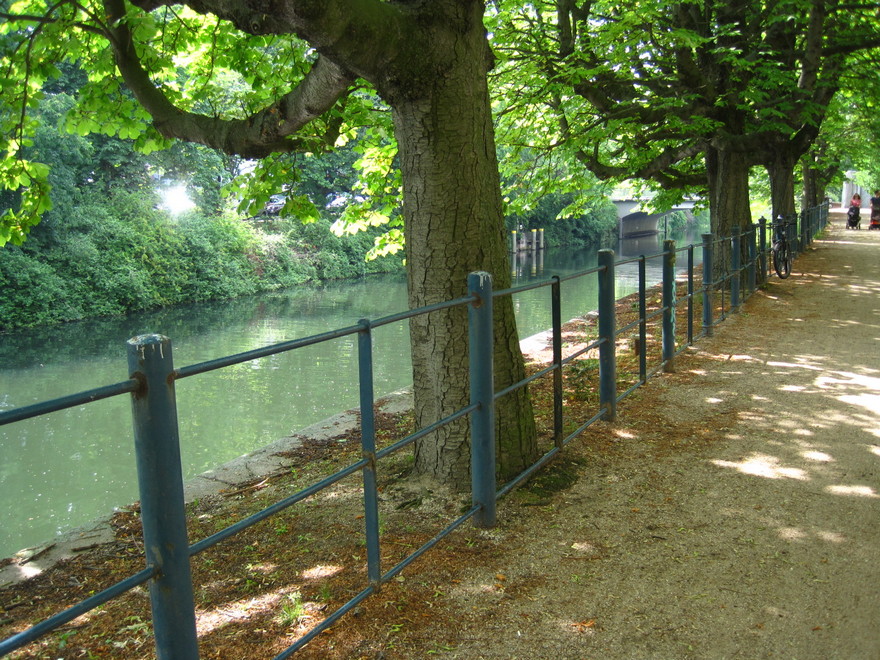 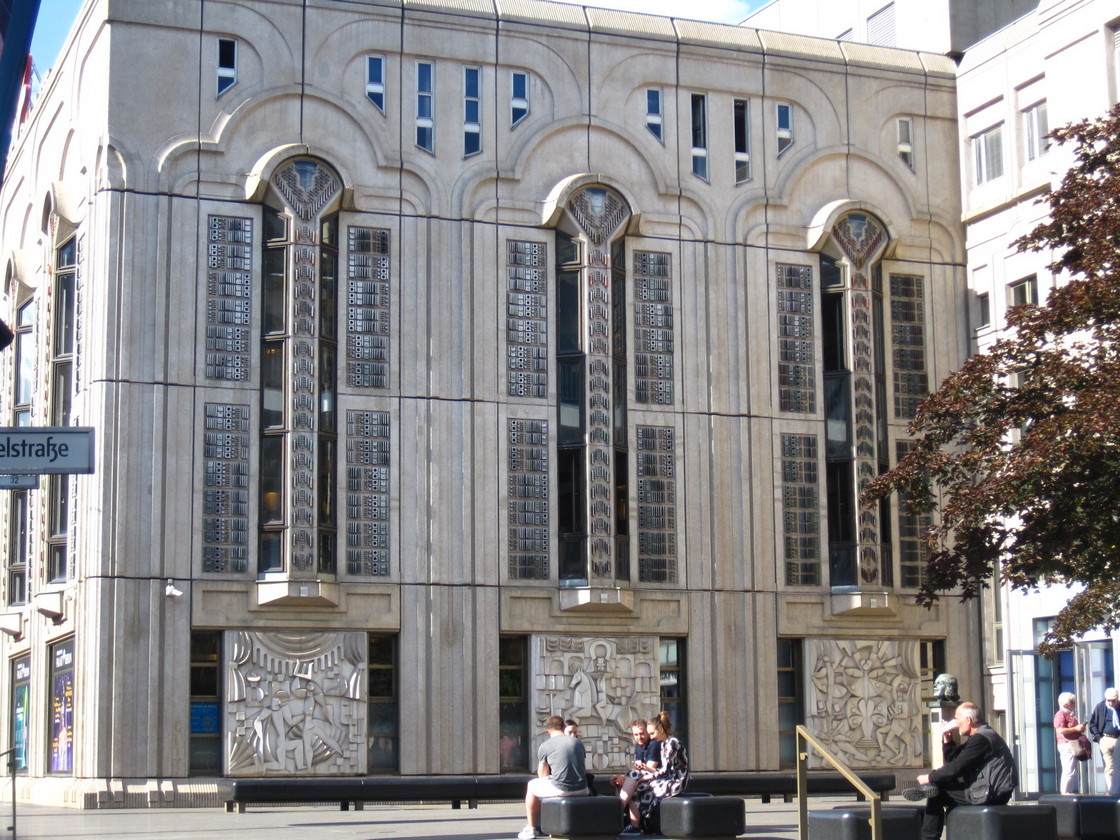 We chanced upon this beautiful Art Deco building on our wanderings. Its stylised Expressionist panels are also very striking. 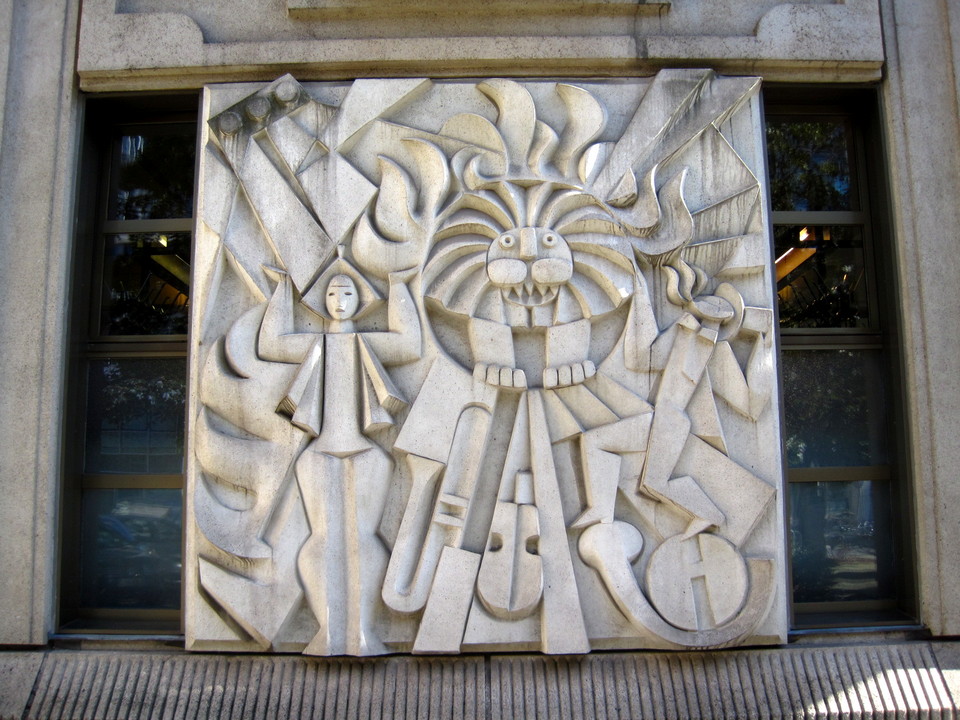 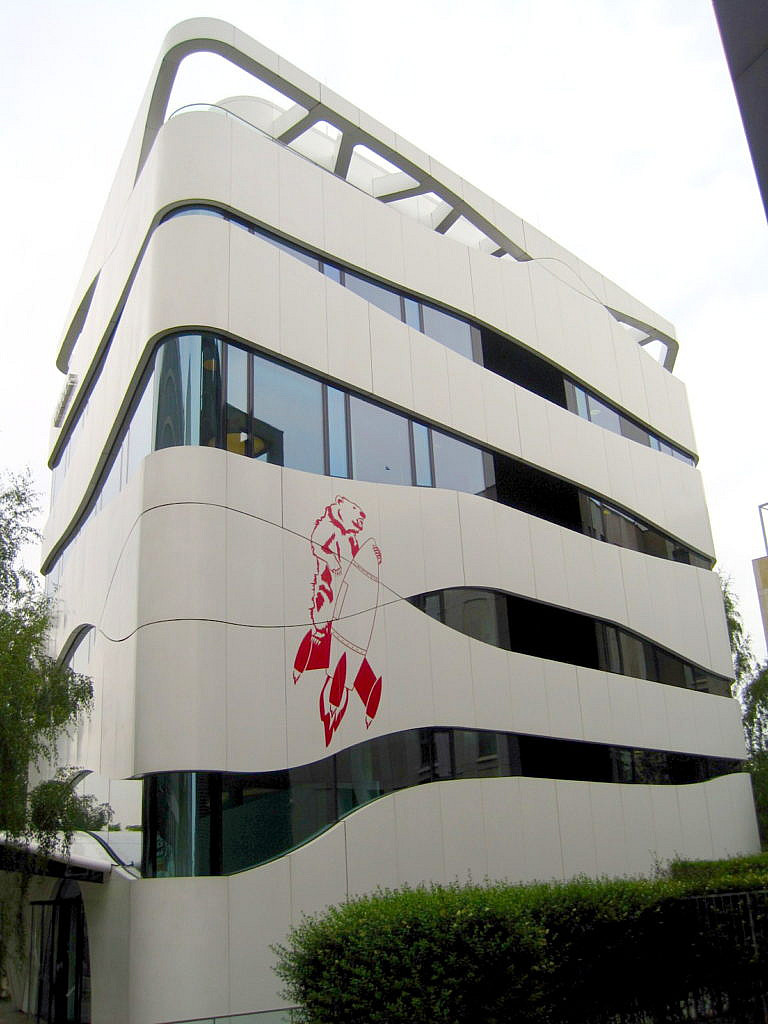 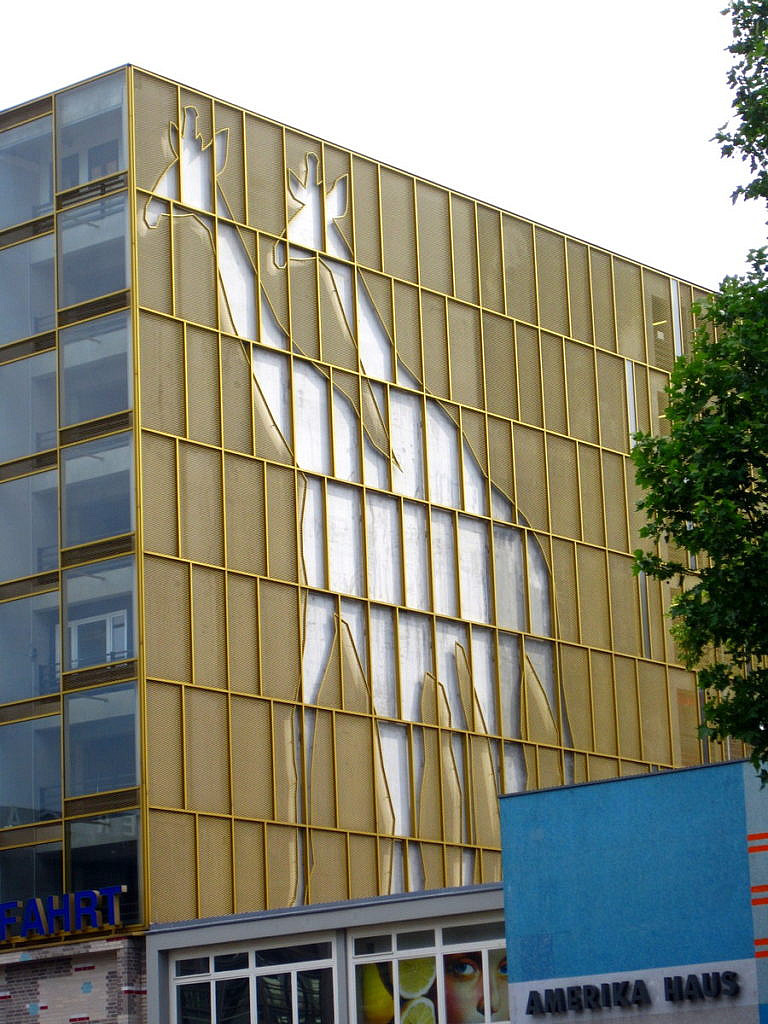 The bear logo (and lots of painted bear statues throughout the city) totally perplexed me until I did some research. Apparently the bear, together with the black eagle, appeared first on city crests in the late 13th century, and from then on cropped up again and again in various forms. It has obviously stayed the distance. But giraffes in Berlin?? 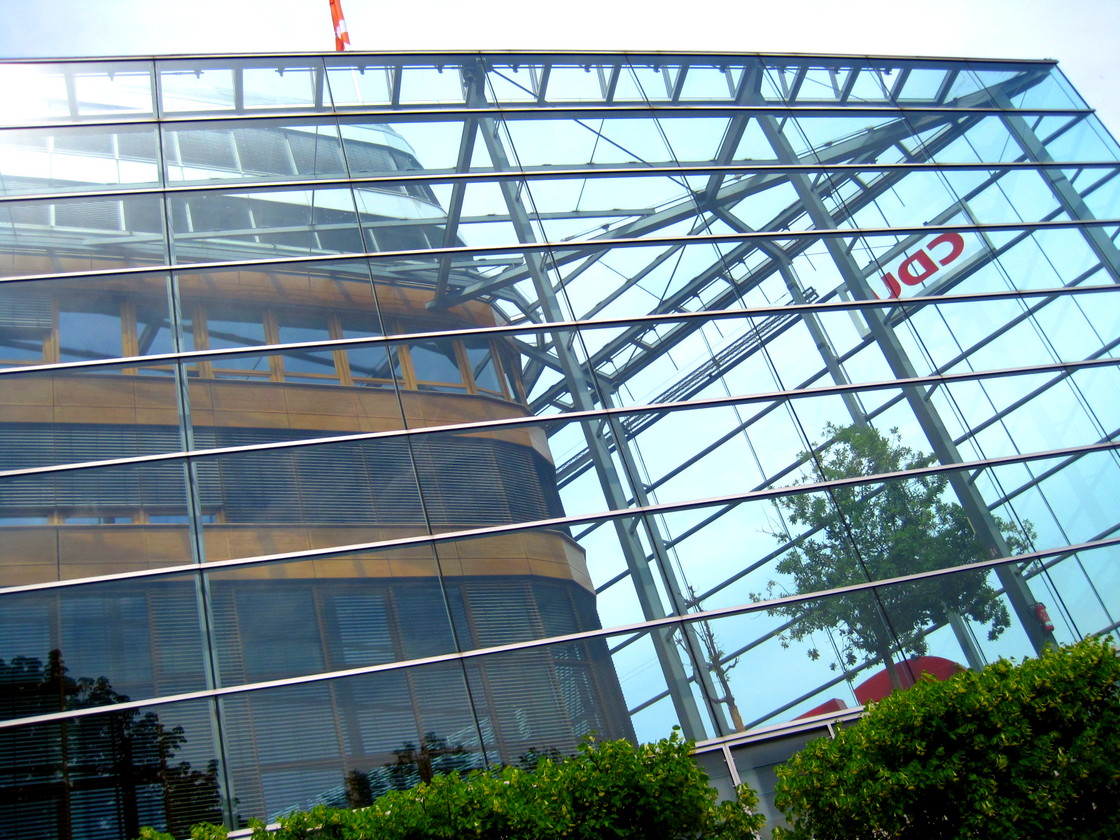 Berliners are big on energy efficiency, as we saw in several buildings. Above an oval-shaped office building standing alongside the river with a glass-box skin around it, maybe for temperature control? 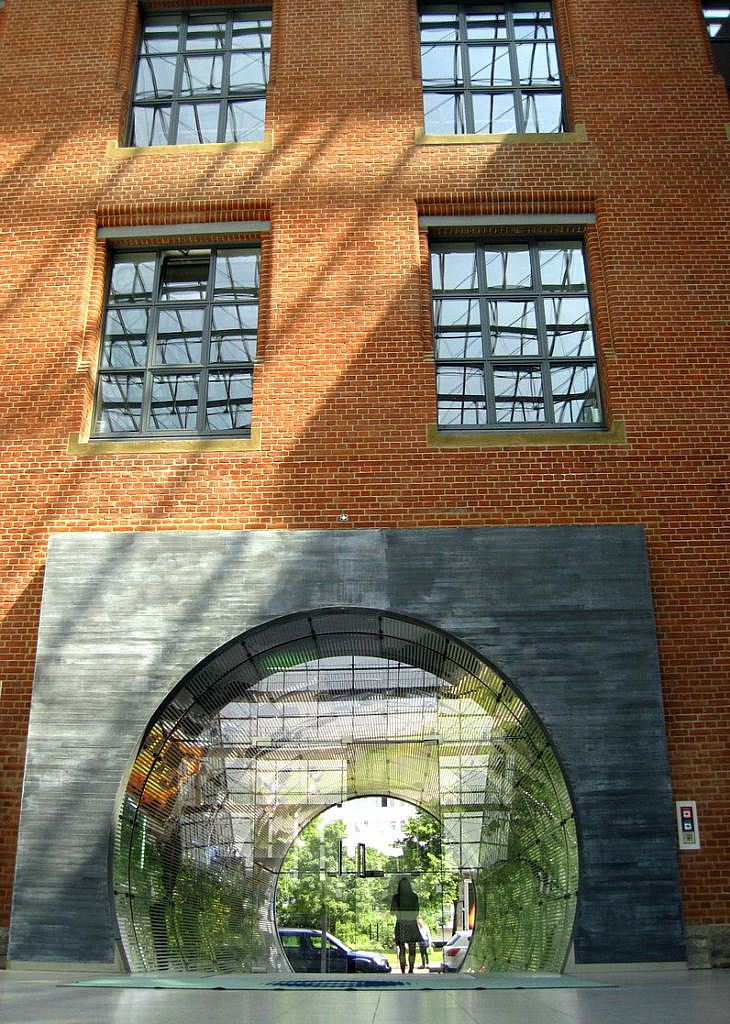 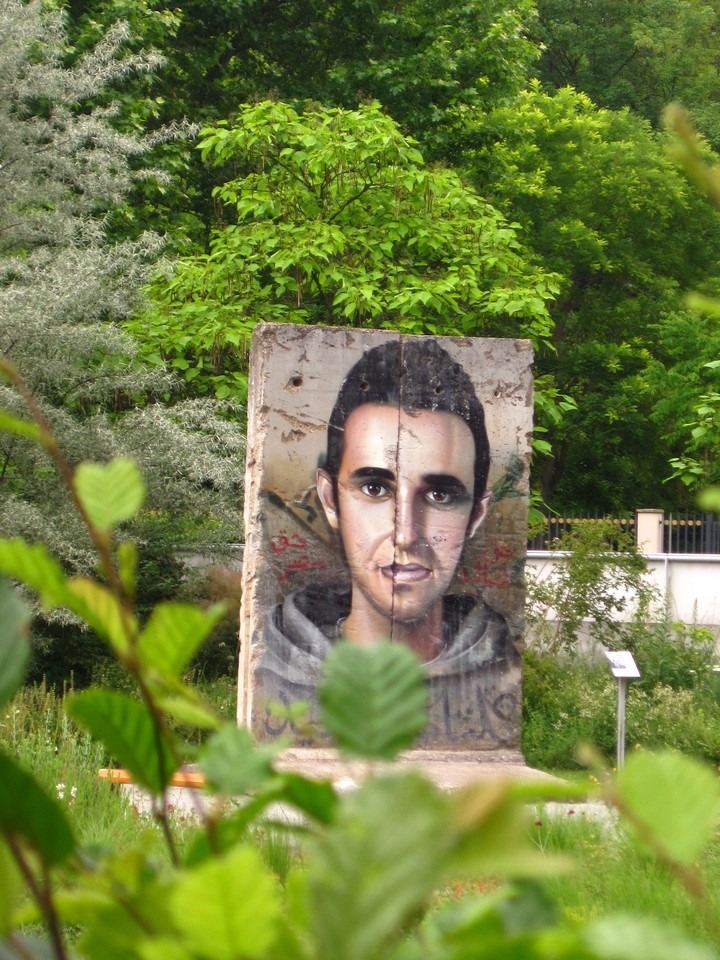 Above left an amazing energy-related headquarters based in a converted red-brick warehouse-style building with a truly wild glass-tunnel entrance below. A panel of the Berlin Wall, above right, was painted and erected in a small park nearby. The face is that of Khaled Said, who became a symbol of the Egyptian Revolution when he was beaten to death by policemen in 2010 for exposing on the Internet police drug-dealing and maltreatment of members of the public. 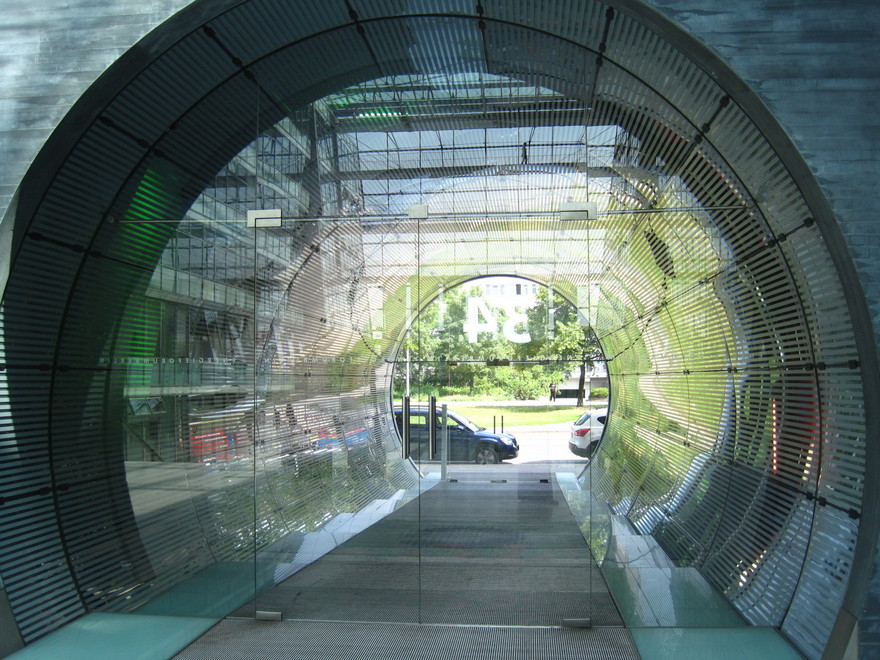 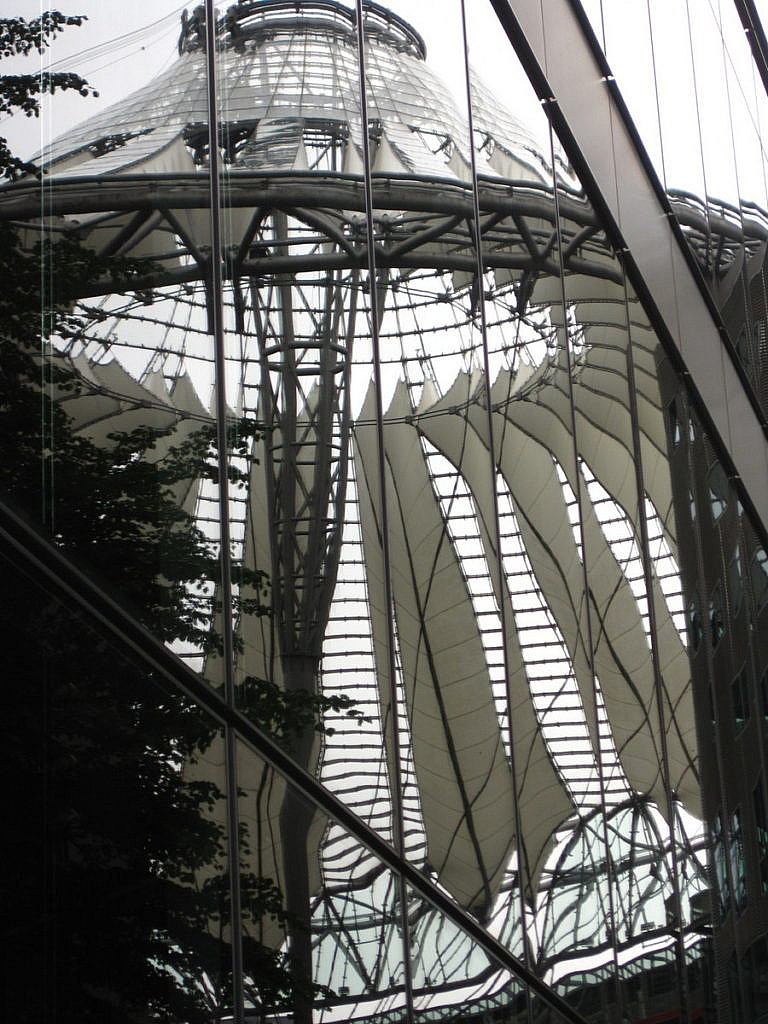 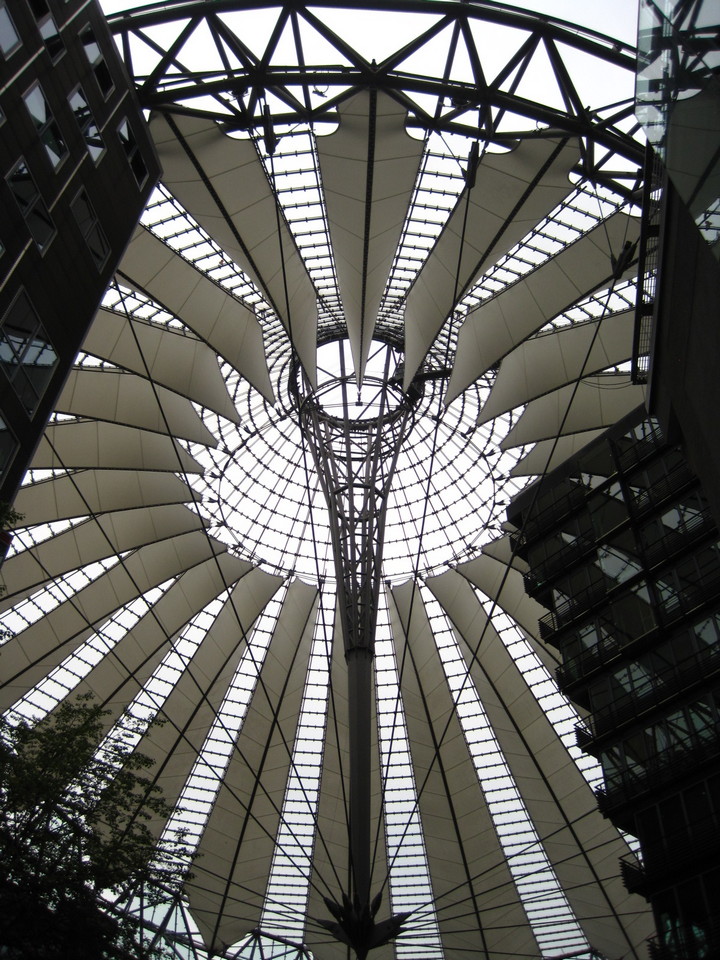 The one is a reflection in glass (left), the other is the real thing (right). Strangely enough, I didn’t convert these into black and white. The sky was so hazy and the light so bad, that this is how my lens saw it. It’s the Sony Center, where Helmut Jahn designed a glass-membrane cupola to stand over a vast courtyard. In this centre are cinemas, restaurants and cafes … very commercial. 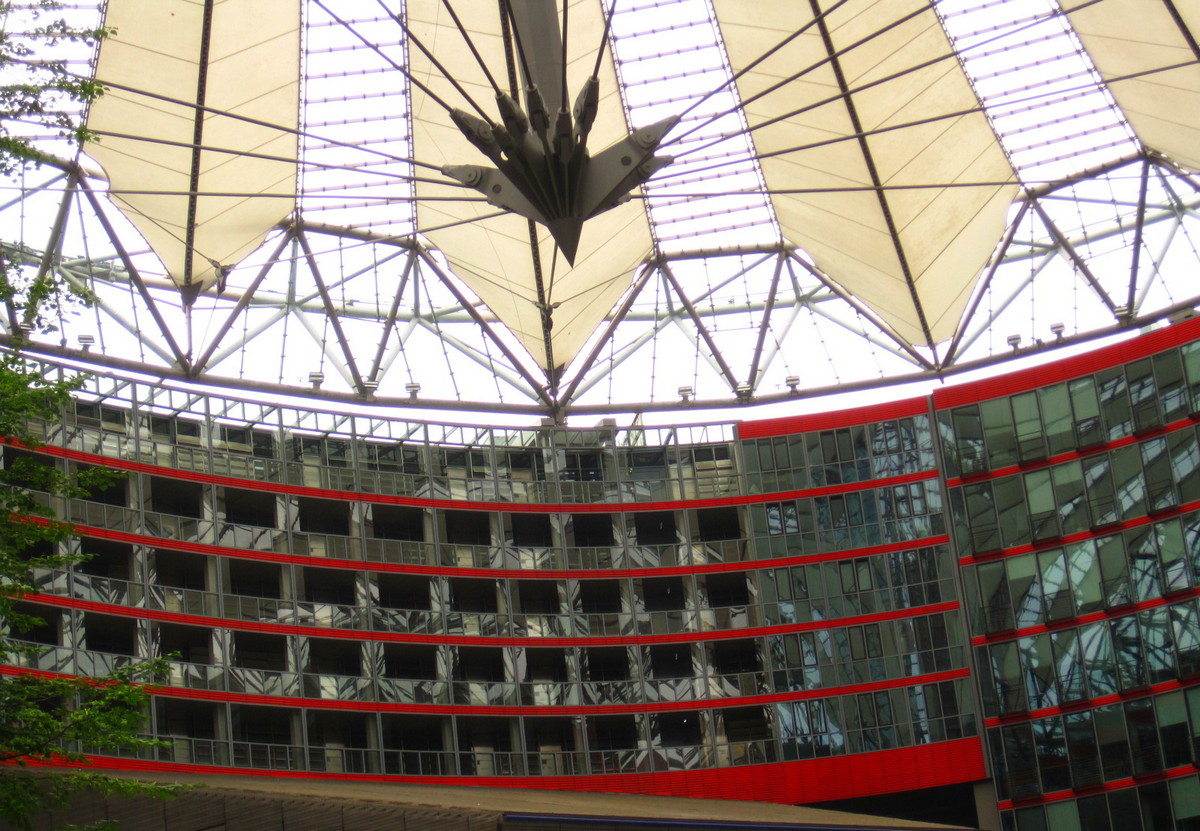 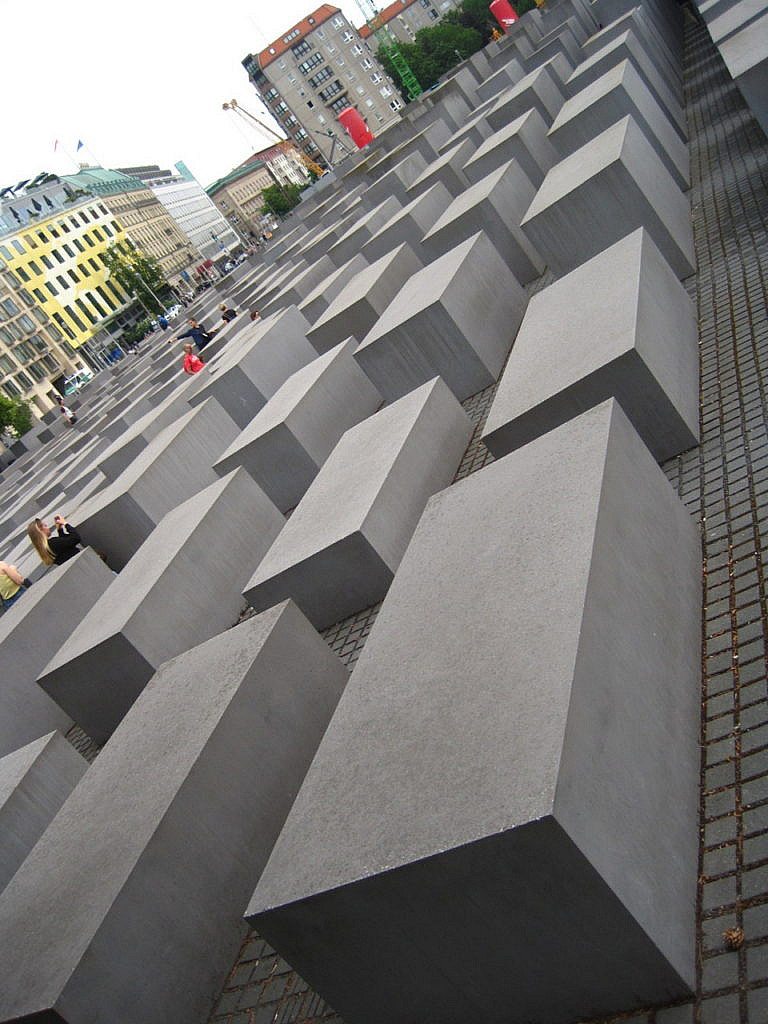 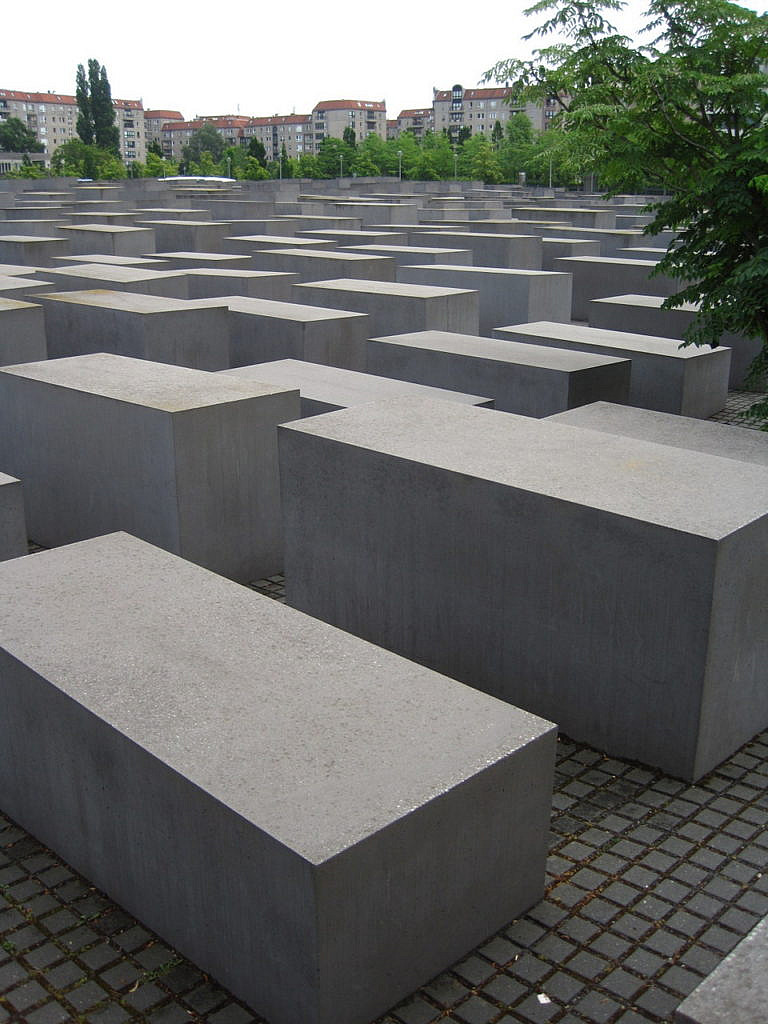 Interesting use of concrete blocks in all shapes and to all heights (up to 2 metres) to serve as Berlin’s Holocaust Memorial. The cold, bare, hardness of the material evokes a certain brutality and callousness. In the passages that run between the slabs, people appear, disappear, reappear … a hint at the obliteration of six million Jews, I felt. It’s a quiet, brooding place, although children skip and jump along the tops of the blocks, and people play hide and seek in between the steles. Emotional, nonetheless. There are over 2,700 blocks across 19,000 square metres. In the nearby museum is a Room of Names, featuring short biographies of murdered and missing Jews across Europe.

A chilling statistic: it would take 6 years, 7 months, 27 days to read the life stories of all the victims aloud. 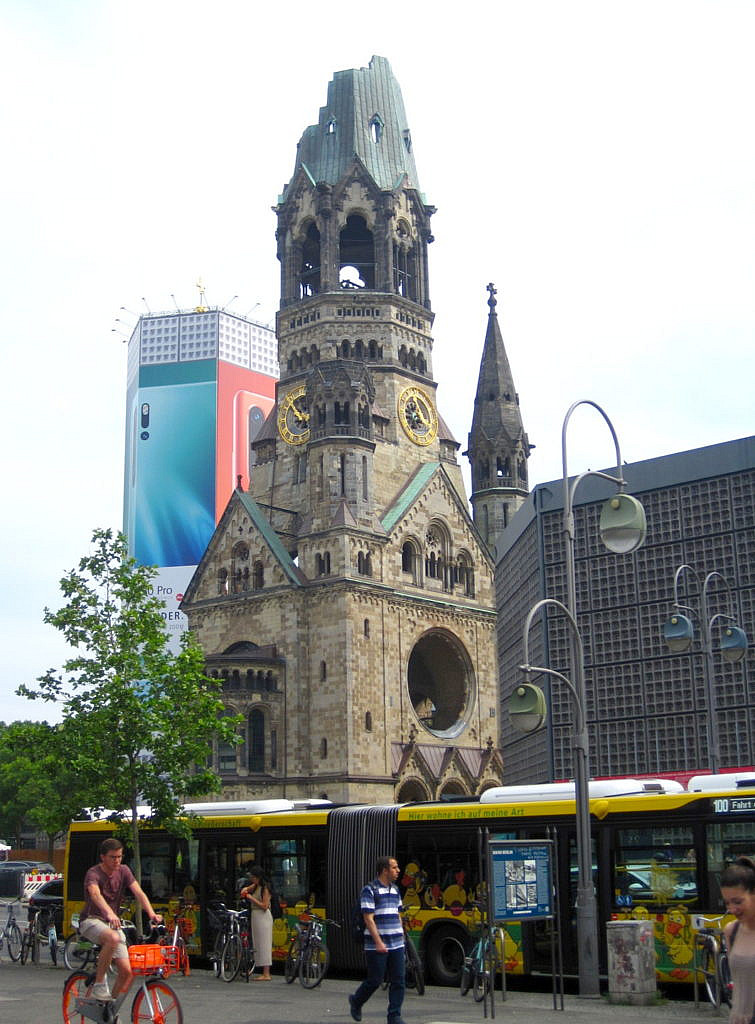 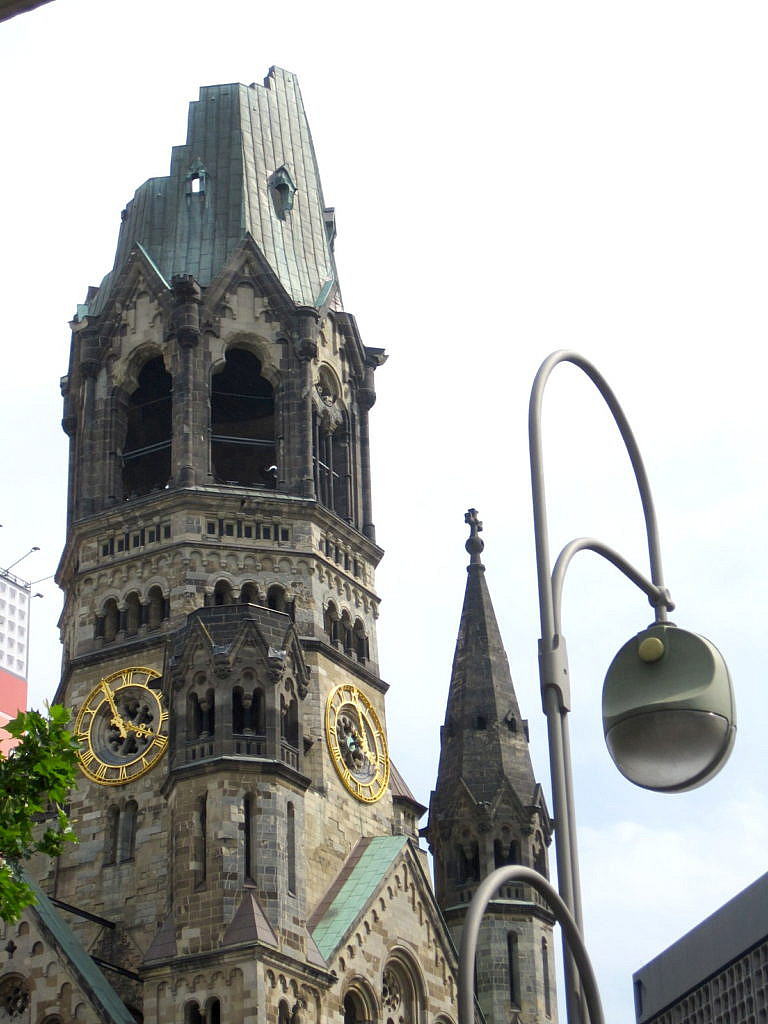 I found this remnant of a bombed church, the Kaiser Wilhelm Memorial Church, absolutely fascinating. It was partially destroyed during the 1943 Allied raids, which ended up razing much of Berlin. The church was going to be demolished, but one in two Berliners voted to preserve it. It has a weird, haunting feel about it when you stand below it. Once again, terrible lighting for photos.