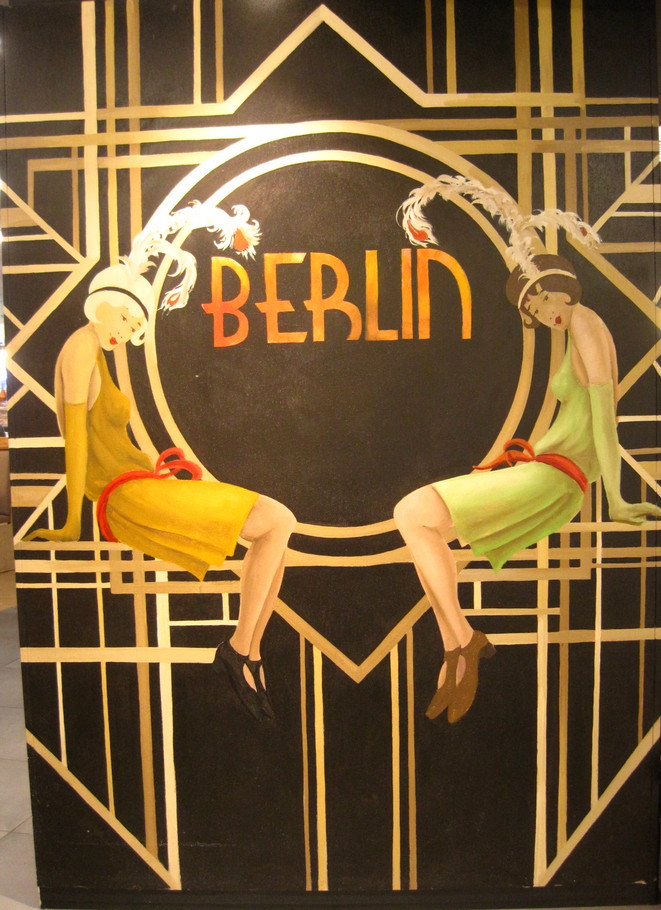 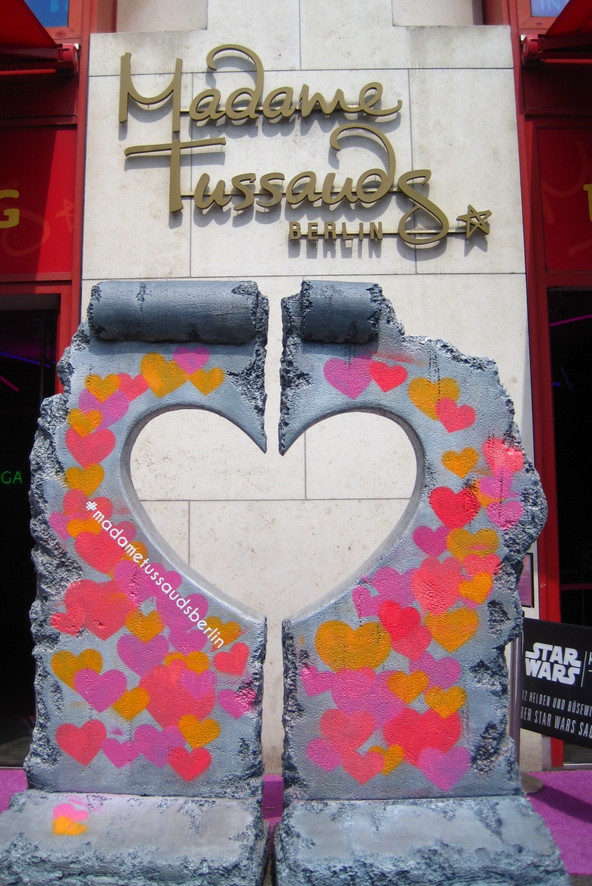 Now that it’s time to become introspective, Berlin has been an interesting experience. More grunge than I expected, less 1920s nostalgia than I’d hoped for. Maybe I’m being naive. (No comments.) The city has less elegance than Madrid, less panache than Prague. Berliners in the service industry are also not that polite. Café owners bark at you like sergeant majors to sit down before they will bring you a menu, and then leave you sitting for an age before even acknowledging you’re there. (Okay, this is along the heavily touristed spots where they must be driven mad by the daily crush of aimlessly wandering, language-impaired foreigners.)

Tourism advisors are also all a bit jaded. Like, rolling their eyes jaded. For instance, “Well, the Berlin metro works just like any other all over the world.” (Rolling of eyes.) Uh … well, what about the fact that the S-Bahn leaves from upstairs in the Hauptbahn station, the U-Bahn leaves from underground in the station, and the Metro Tram from outside the station? Never mind the 12 or more colour-codes of the different lines (NOWHERE do you find a little key with the colours and the line numbers next to them). Just saying … 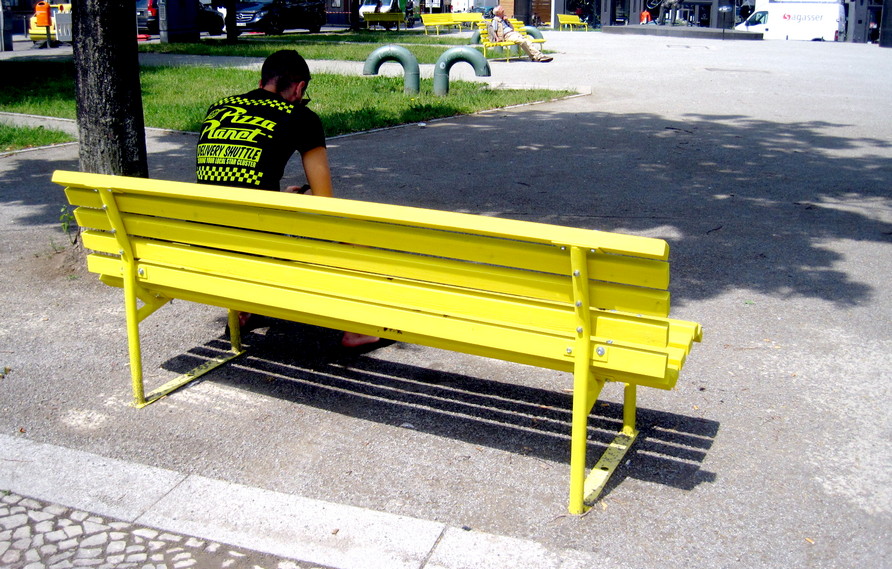 Then there are the bicycles. This is not Amsterdam. But you could well be mistaken. There are soooooo many wild, unhinged cyclists who fly down the cycle paths — which also, mind you, become pedestrian paths at various times — that it puts you off ever hopping onto one yourself. As Hirsh once said inside the Hauptbahnhof (where they also ride their bicycles), the great Zulu Wars weren’t that hazardous.

The Germans being a fastidious nation, Berliners are not that fastidious about cleaning their streets and their parks. And it doesn’t help that this is a smoking city. Everyone smokes, everywhere. Which is why the streets are littered with cigarette butts. Ev-er-y-where. That said, the streets are no grungier than New York’s are, so ….. But a little more frequent street sweeping and garbage collection would work wonders.

Among the younger crowd, certainly there is a sense of personal self-expression — and an awareness of the freedom to self-express. Lots of body art, but no more no less than in Prague. The young women wear Doc Martens with spring dresses, the guys grow a single dreadlock sprouting out of the back of their heads. It’s definitely an exploratory city for the younger generation. They gather in their droves around the Hauptbahnhof, arriving, departing, or just hanging out, sitting in hippy circles on the dirty ground and drinking beer. 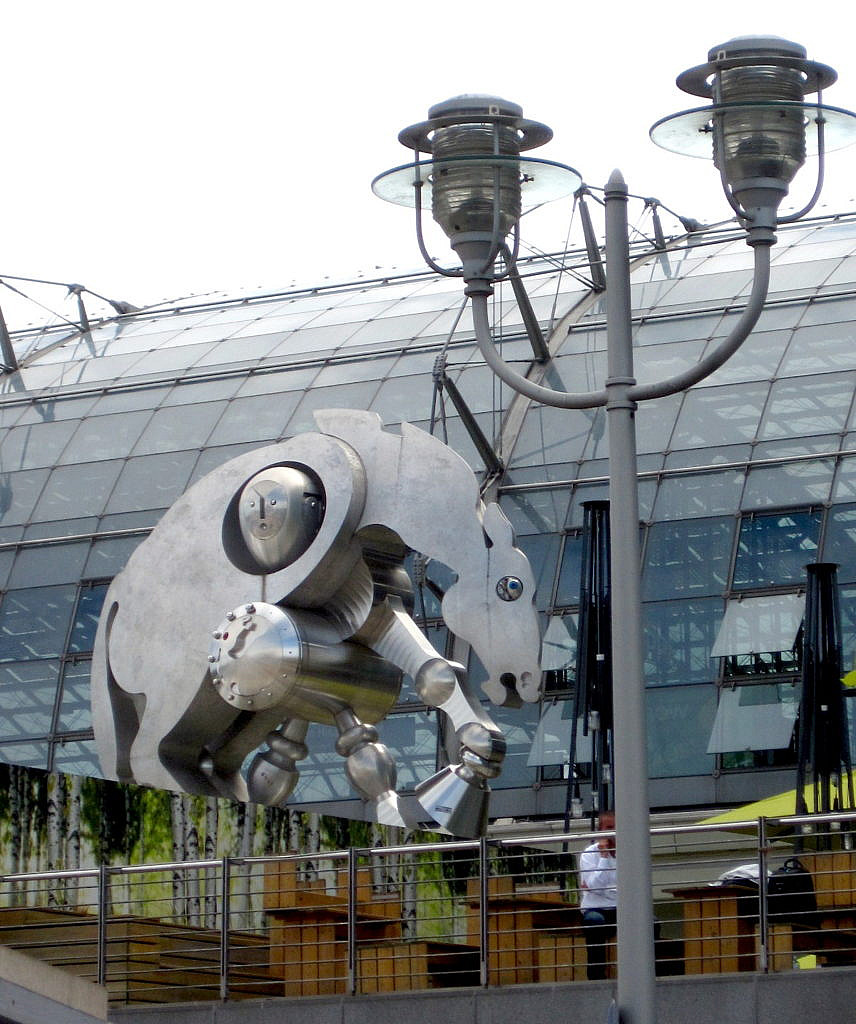 A funky, trippy sculpture outside the Berlin Hauptbahnhof.

All that said, we had a really good time in Berlin and I think we’ve done a very good job of walking it flat while trying to experience all the different neighbourhoods — of which there are many, each with its individual character. 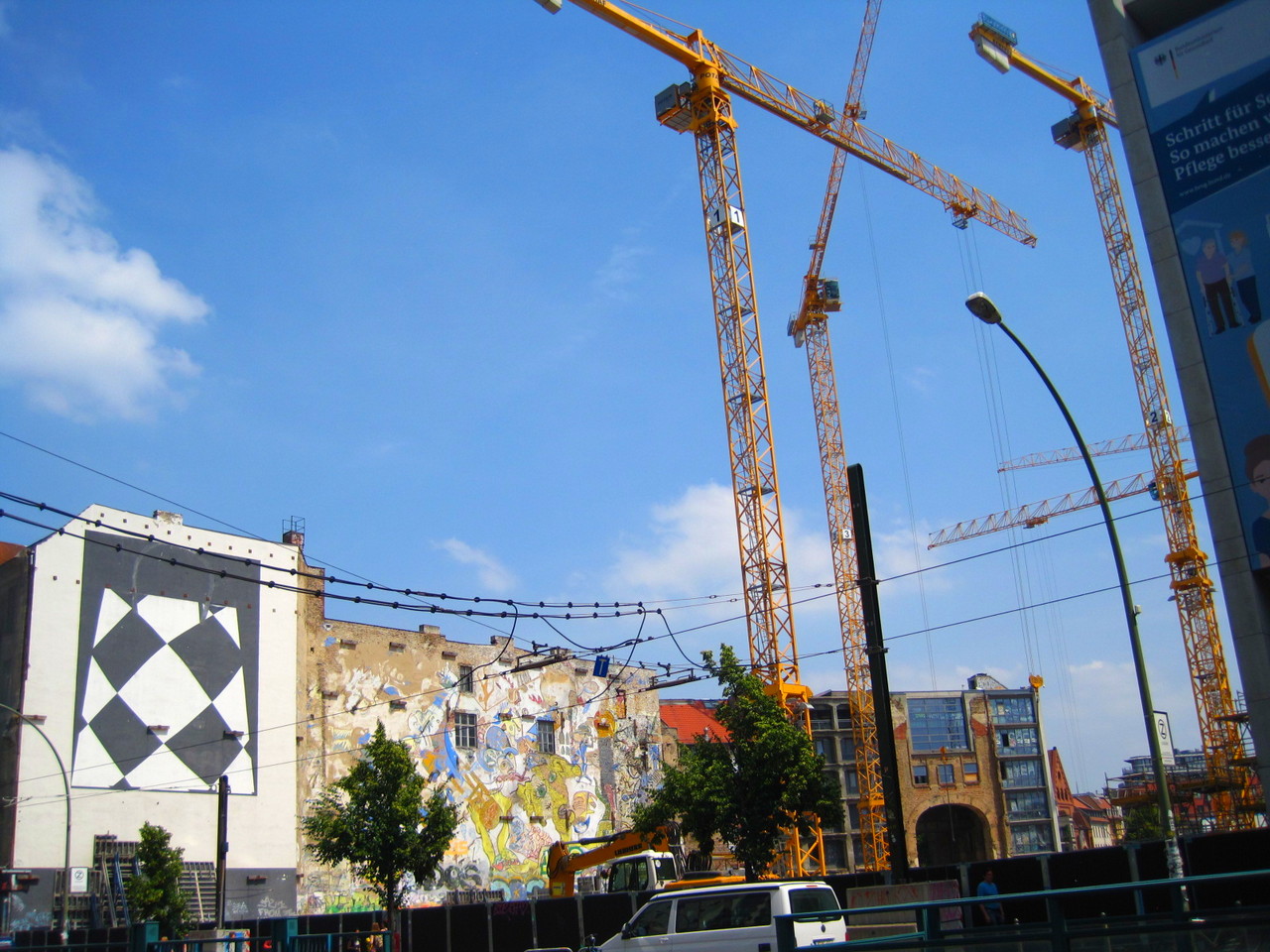 This is most definitely a developing city and you just can’t escape the construction, wherever you pass by. 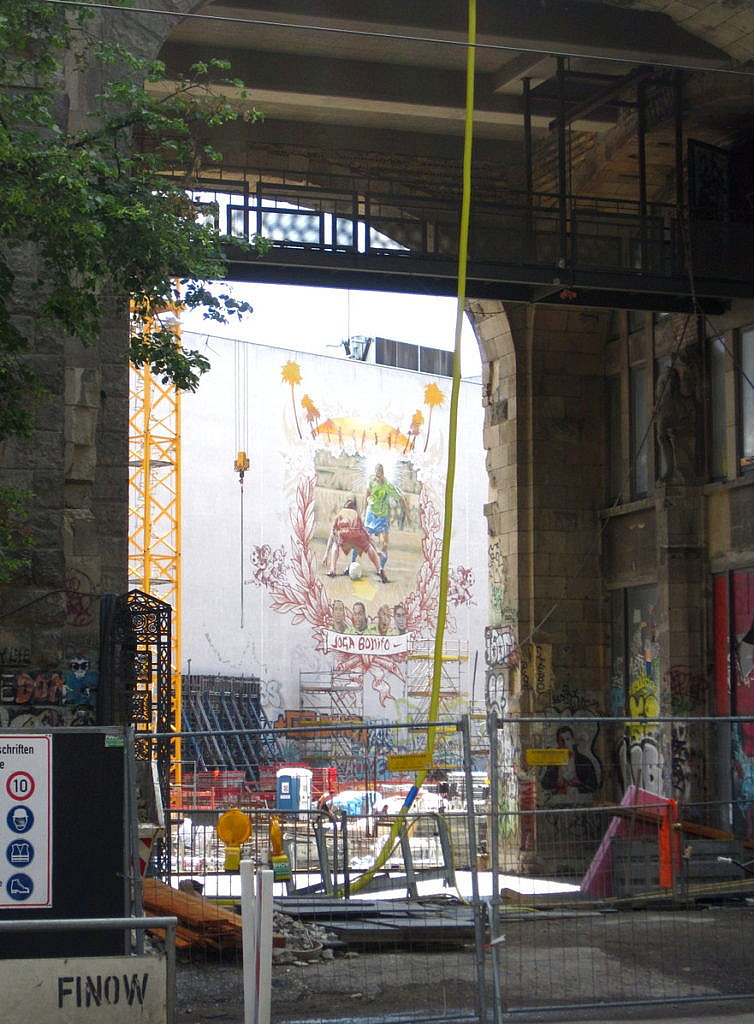 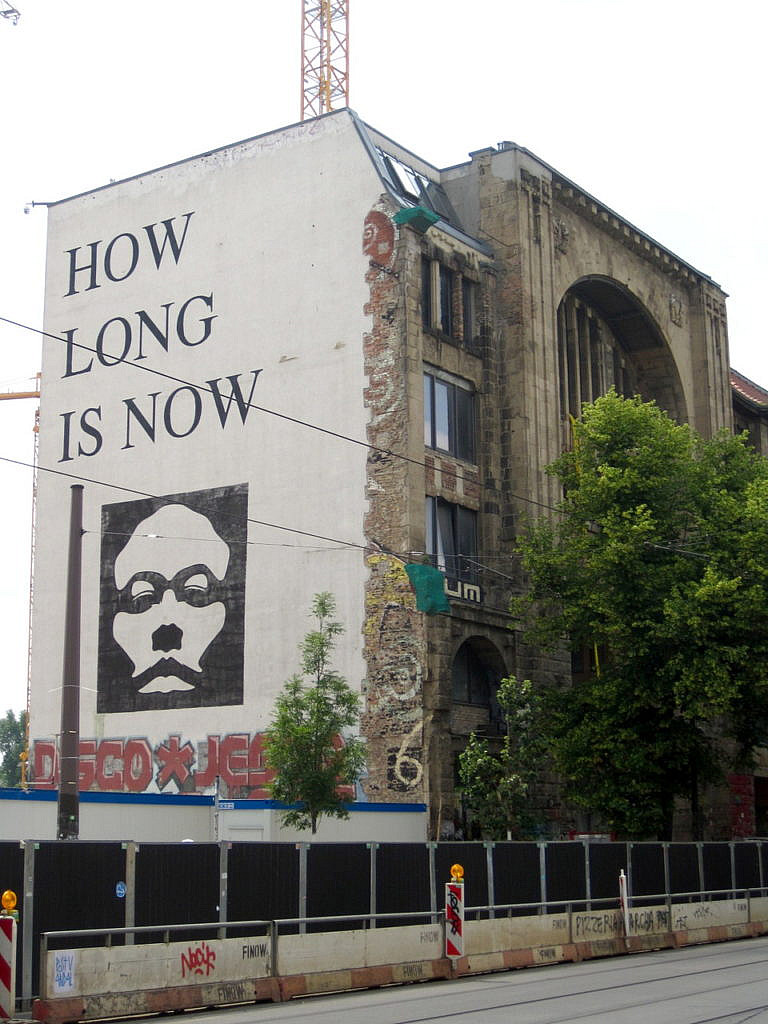 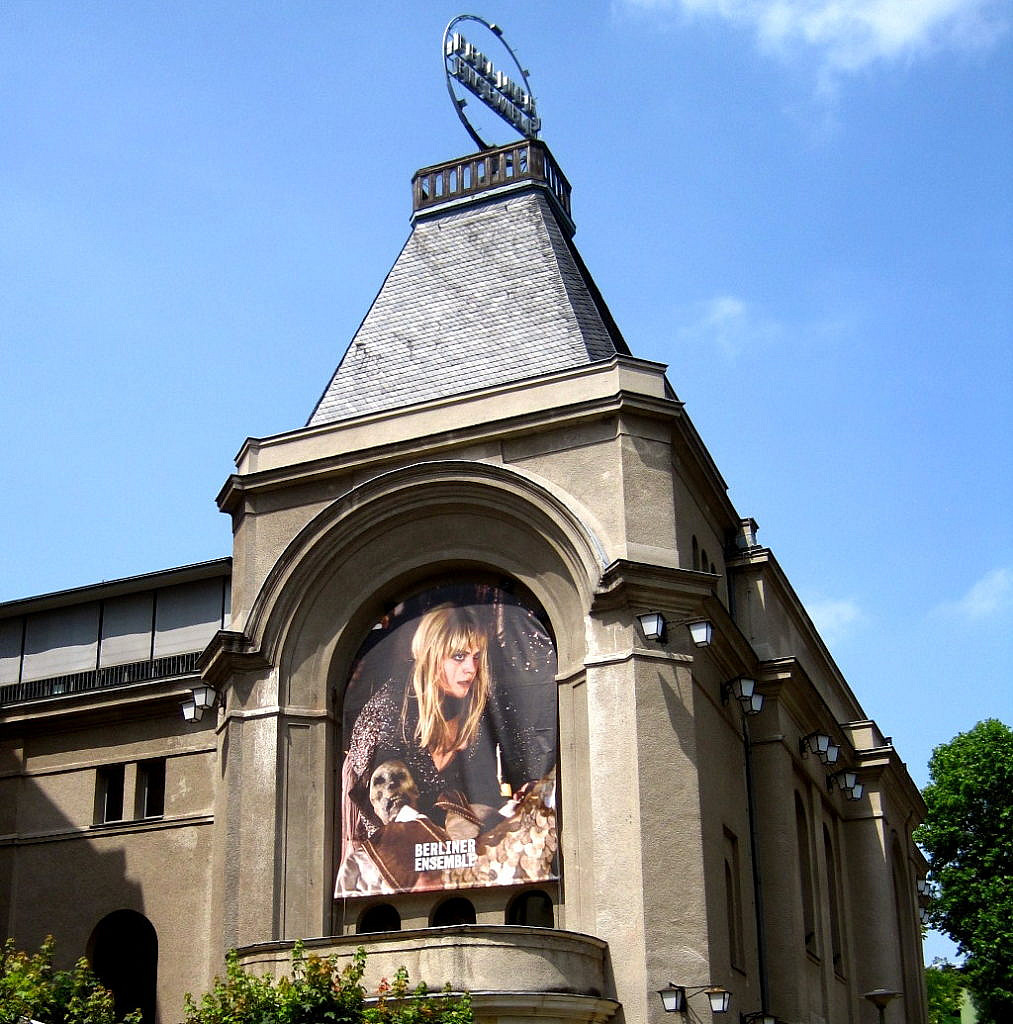 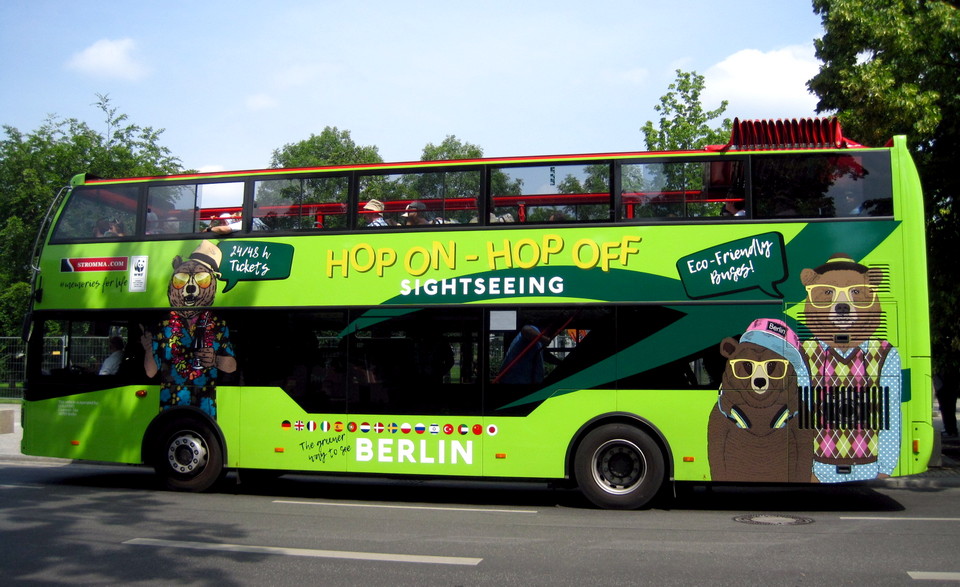 Now that I know what the bears are about, my first Berlin Bear photograph! 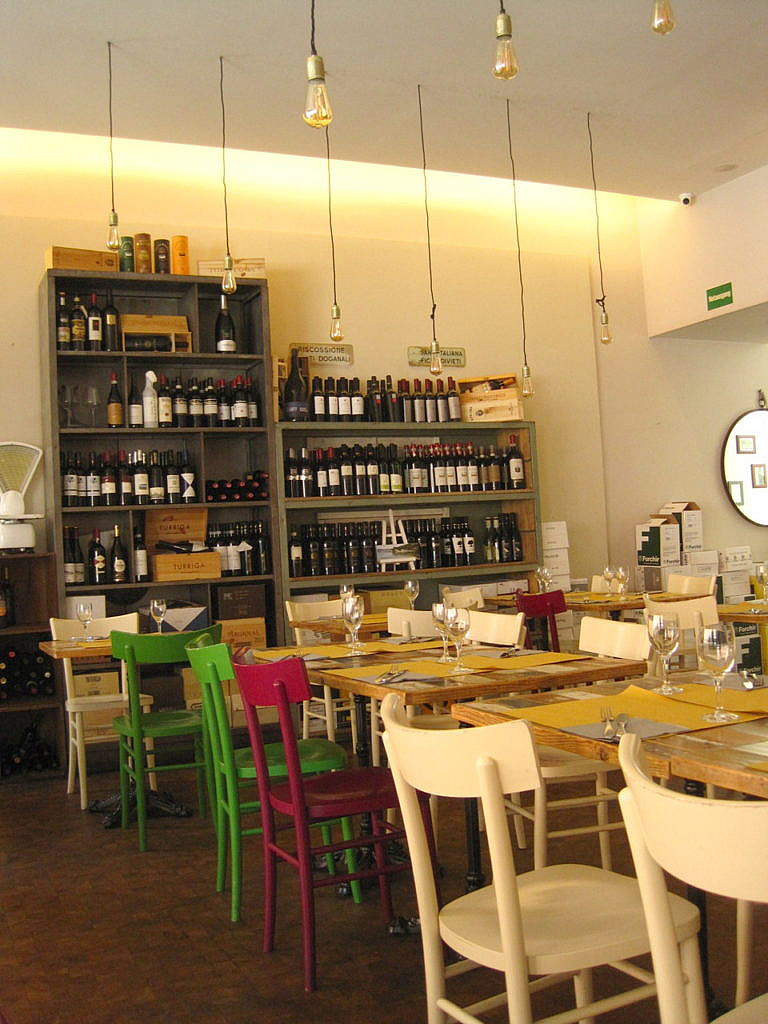 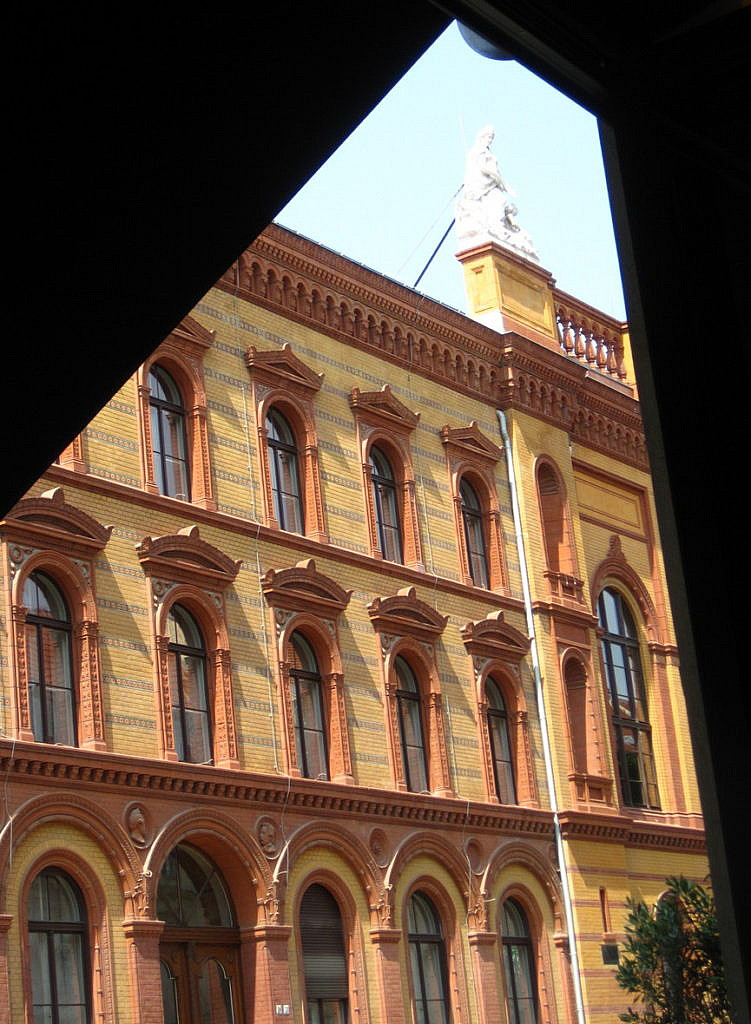 Our last lunch in Berlin at a little modern Italian restaurant (where everyone, down to the chef, spoke Italian!) called Vino e Basilico. Above right was our view from our table. Sublime way to end our stay.

And … da-daaaa! Now that we’ve decided we quite liked our gently grunged, very spacious, extremely well situated apartment, I’ve picked up the courage to show you some pictures — although as I’ve said before, it is decidedly photogenic. 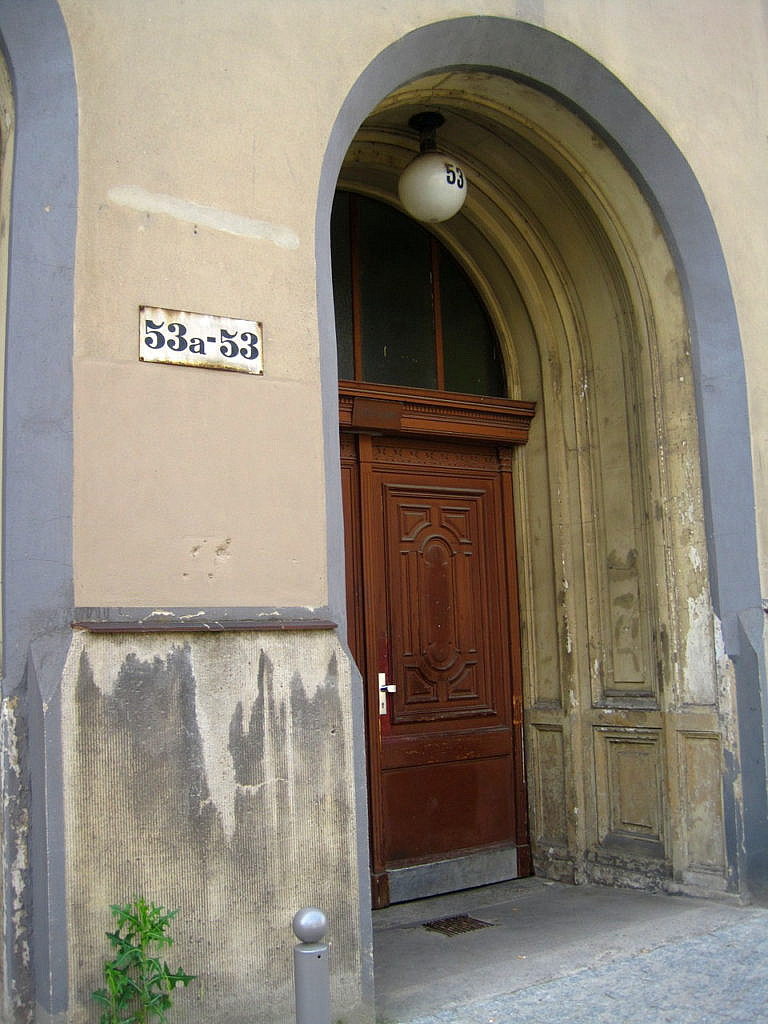 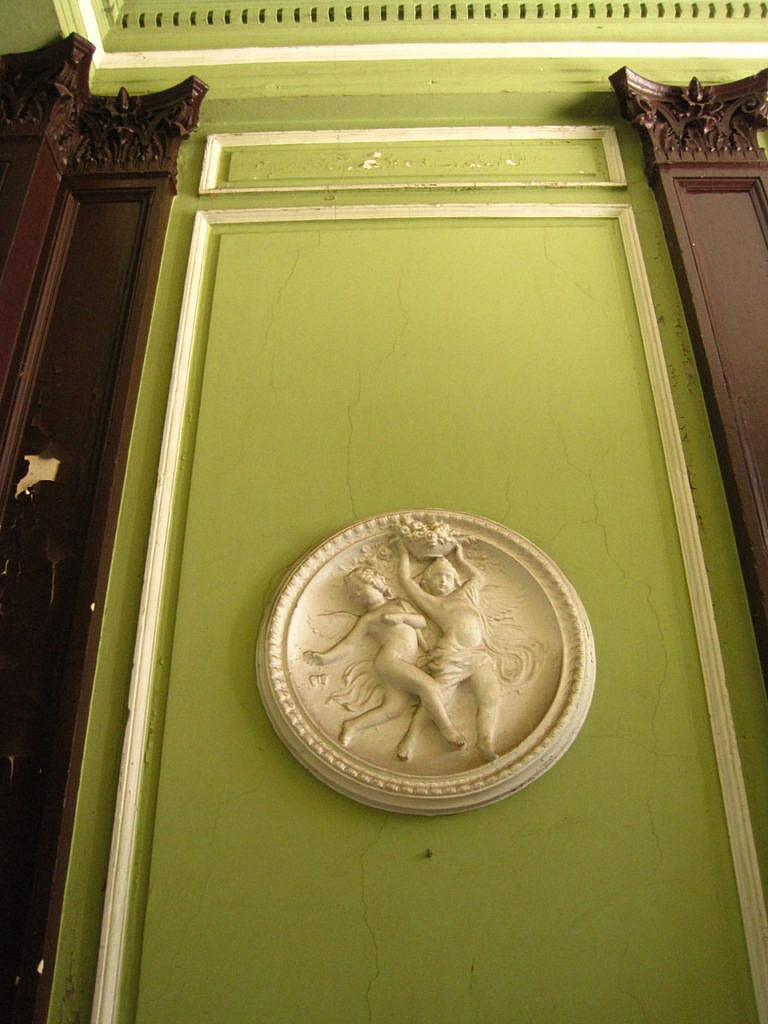 Above left  This, my friends, is the auspicious entrance to our building. Above right is one of a few plaster-relief wall panels in a dank, damp, dark entrance hall — one of the reasons, I think, for the “building of historical interest” designation. If you look closely, you will see the cracks and peeling paint. 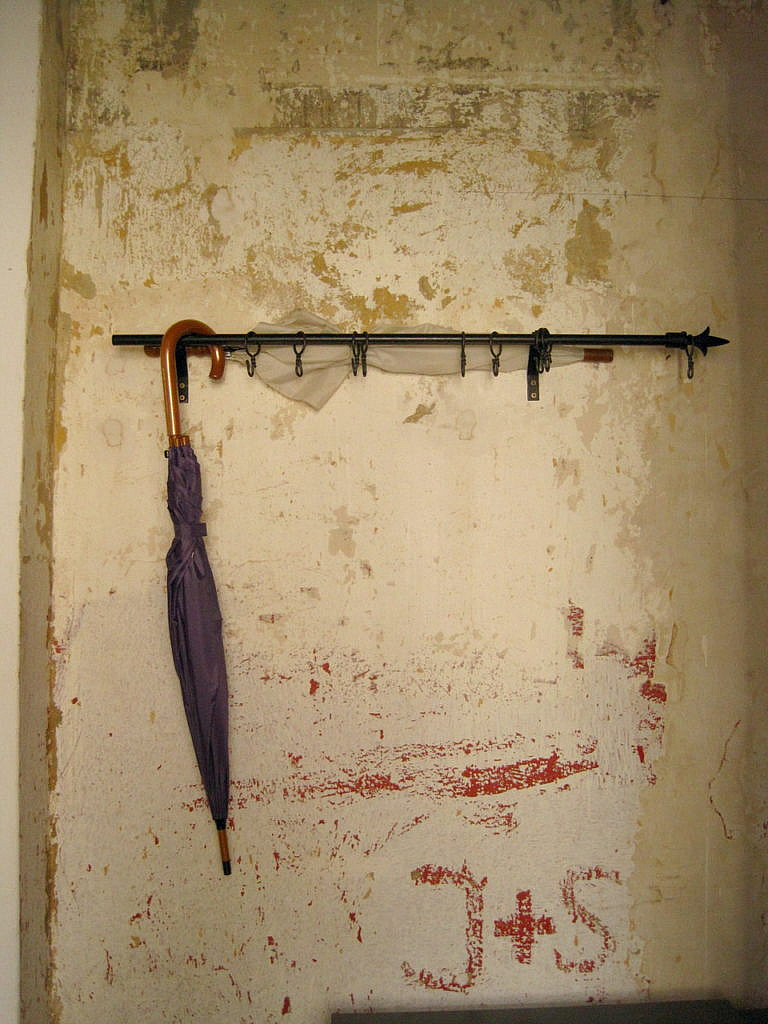 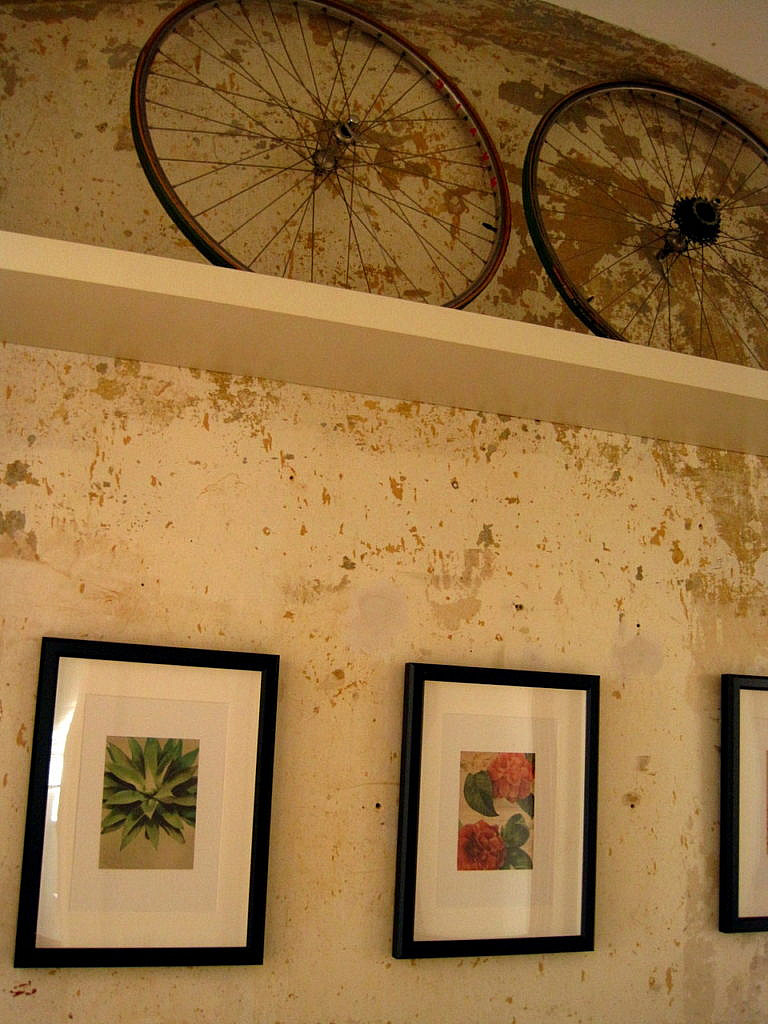 This is the creative shabby-chic that met us after a five-hour train journey and dragging our suitcases endlessly in the pouring rain. (This is in the hallway, mind you.) 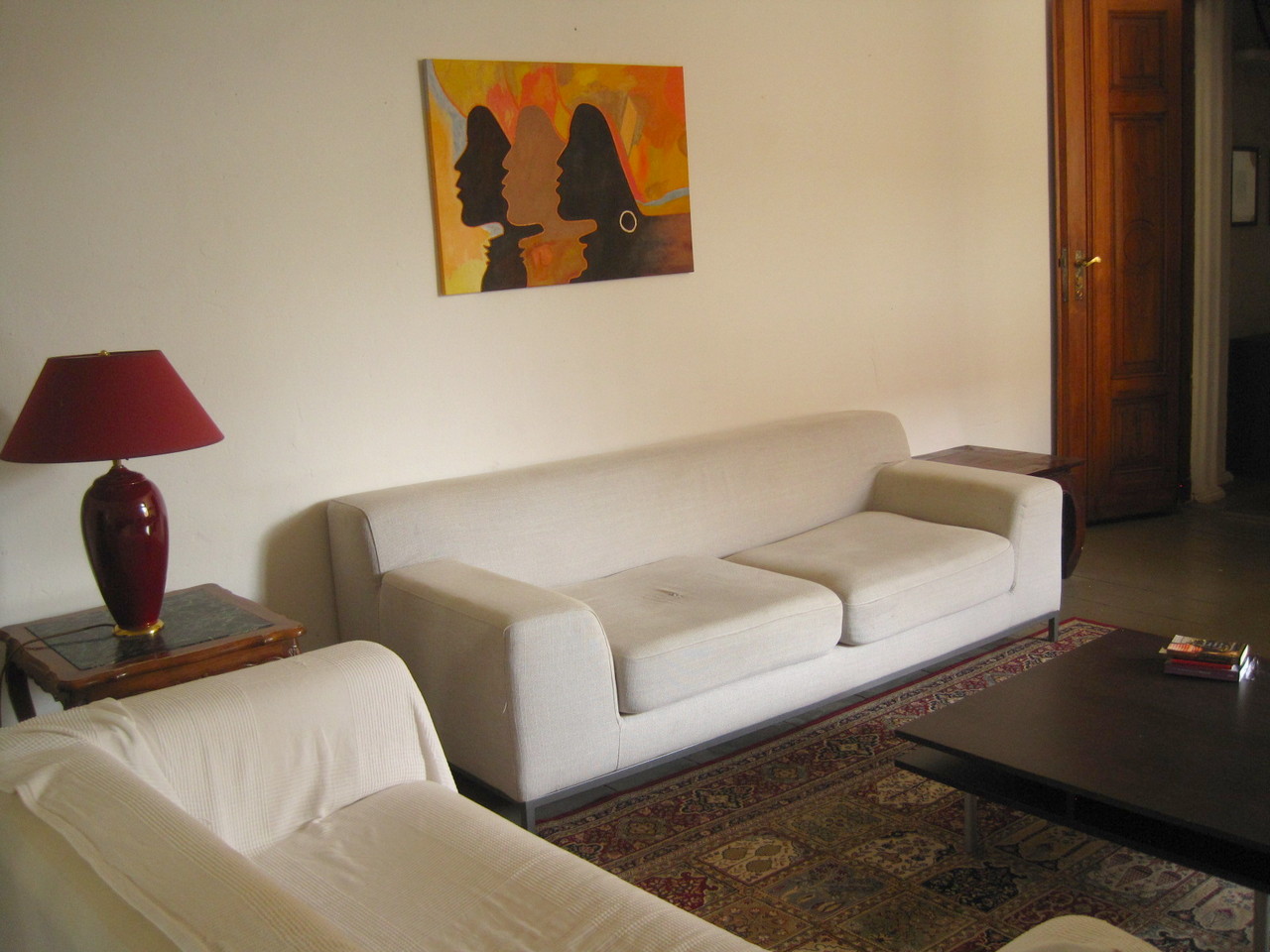 It does get better … Our airy, high-ceilinged lounge. 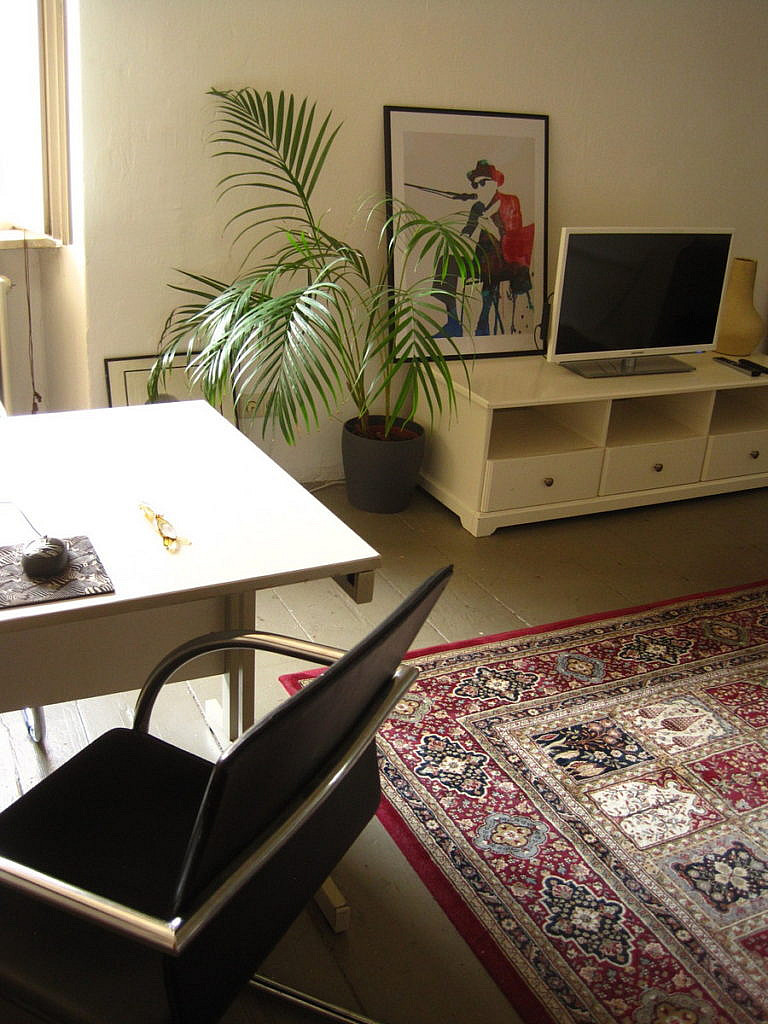 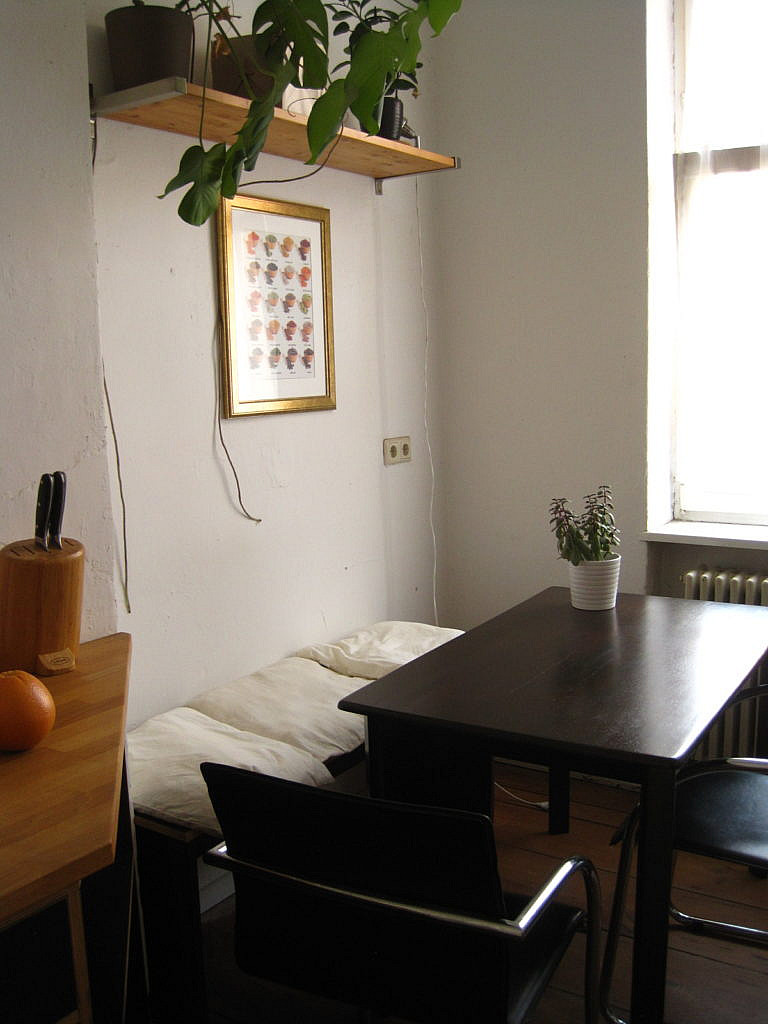 Left  Another area of the lounge with a desk, where I worked at my PC (we think that’s John Lee Hooker in the painting). Right  The breakfast nook in the kitchen, which was also spacious. So, all in all, not really that shabby.

And, now, after five weeks of travelling we’re ready to come home. 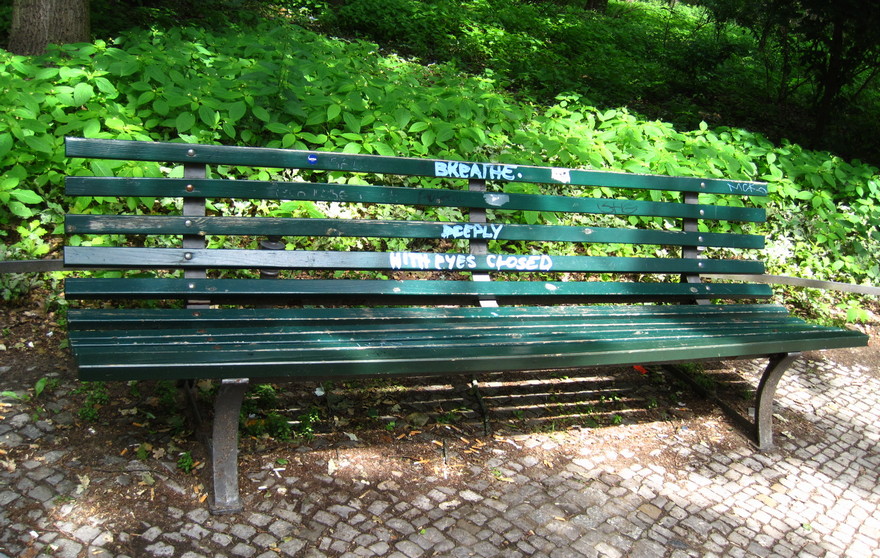