It was a 3°C morning. Even the Disco’s dashboard flashed us a snowflake. Our day was one of African amplitude … great wide open spaces. With the soft cinnamons and purples of the Drakensberg rampart on the horizon, all around us were big skies and low undulating fields of cropped golden grass cut through by a highway in tiptop condition. Our accompaniment: a nose-to-nose procession of transport carriers. We were on the Durban—Joburg run …

By the time we got to Newcastle, we were in a smog so thick you could write messages in it. I mean, what else would you find at Newcastle but coal-mining plants and smoke-spewing coal towers?! Added to this, farmers insistently burning their farmlands. Mad Max wouldn’t have felt out of place. Volksrust marked our crossing from KwaZulu-Natal into Mpumalanga. Our blighted landscape endured. The mountains had subsided with only grasslands pushing out to every horizon, interrupted only by maize stubble and grey humped Braham cattle. Thundering mining trucks that took no prisoners were the day’s challenge. 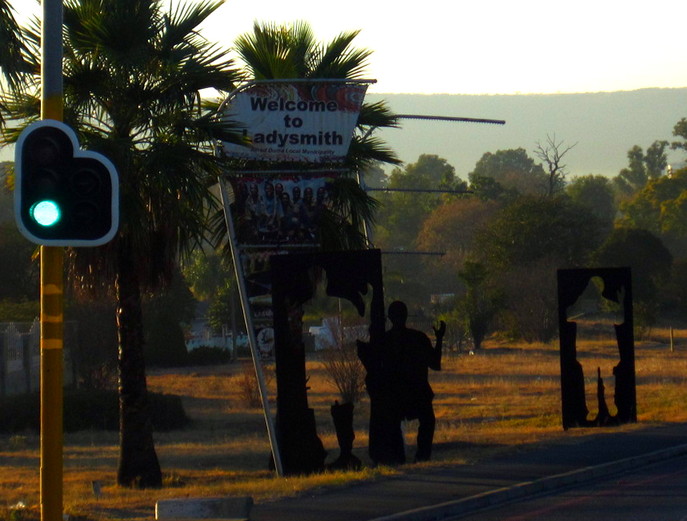 Even Ladysmith can get funky. A sculpture at a traffic light: two cutout figures, with the actual cutout standing behind his empty outline.

The prolific wildfires were unbelievable. Simply everywhere you looked were little plumes of smoke … on mountaintops, in the farmlands, along the road verges, in the dessicated bushland. Right now the vegetation is so tinder-dry that it simply takes a shard of glass or a highly reflective piece of metal for the brittle grass to catch alight. The fires appear to be left unattended; not too much notice is taken of them.

Once we were past Ermelo and Carolina, and were heading through Waterval Boven finally on our way to Malelane, the landscape rose into the truly dramatic granite-bouldered kopjes of the Eastern Escarpment. 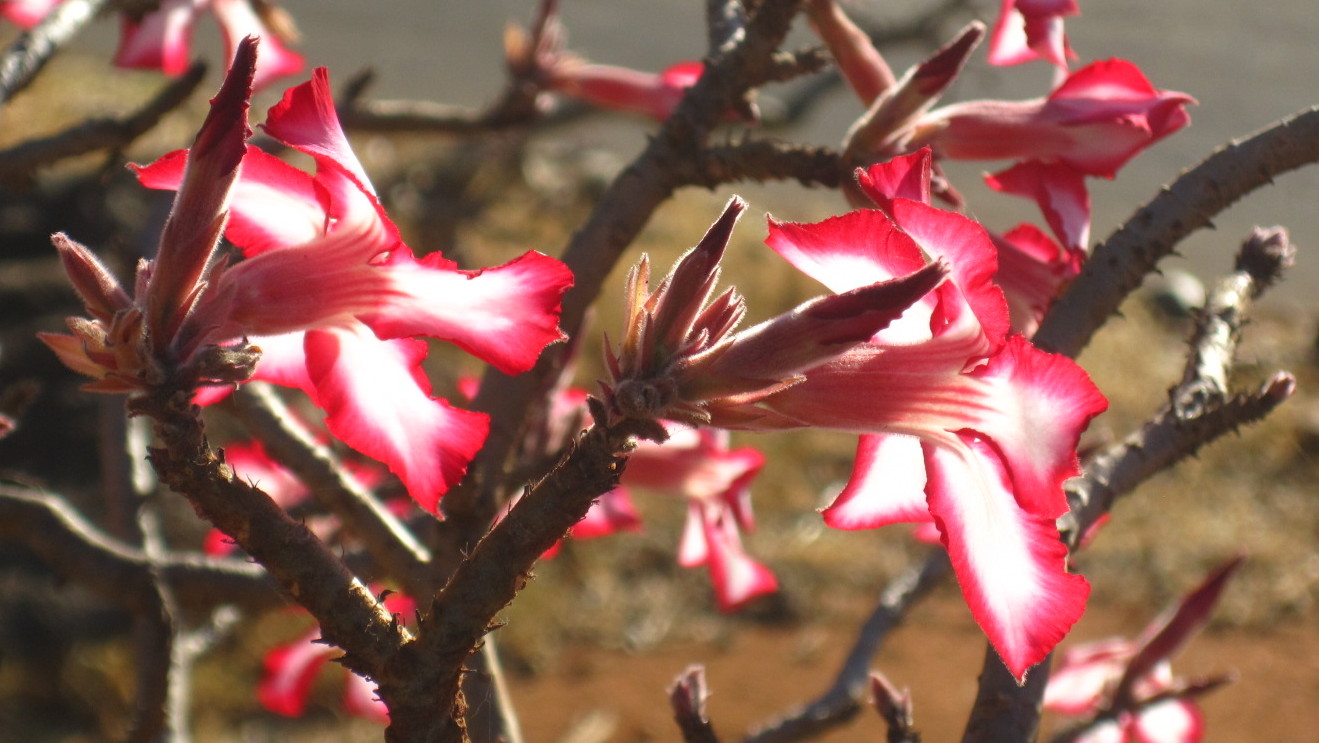 And, so, after 4 days, 2 000 kilometres, and 24 hours’ driving we are sitting in Berg-en-Dal camp in southern Kruger. 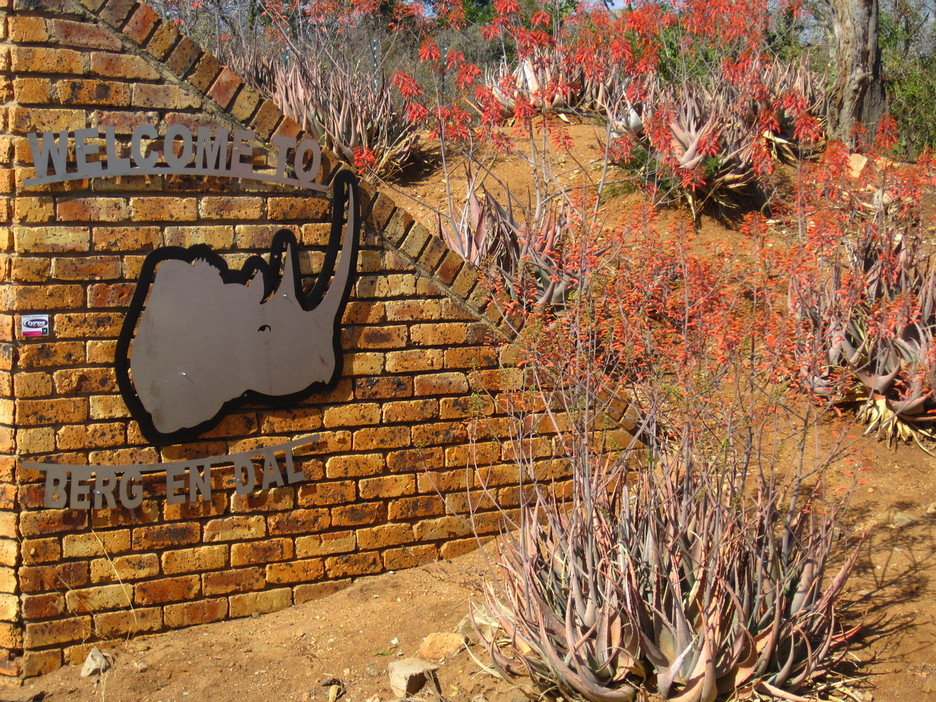 We were very, very tired. But nothing that a braai in 25°C temps — it was in the 30s when we arrived late afternoon — and a glass of chilled beer (or sauvignon blanc) couldn’t sort out. Particularly when our dinner entertainment was a series of guttural, drawn-out bellows between three male lions (two brothers communicating with a distant male?) and the occasional yelp of a spotted hyena. 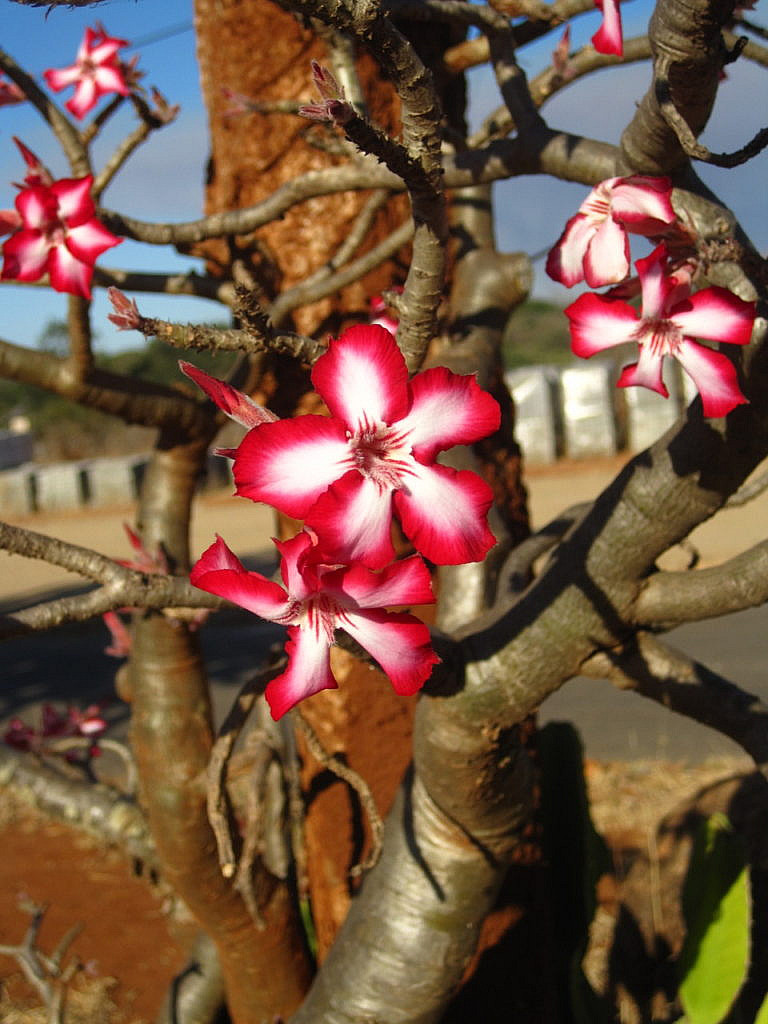 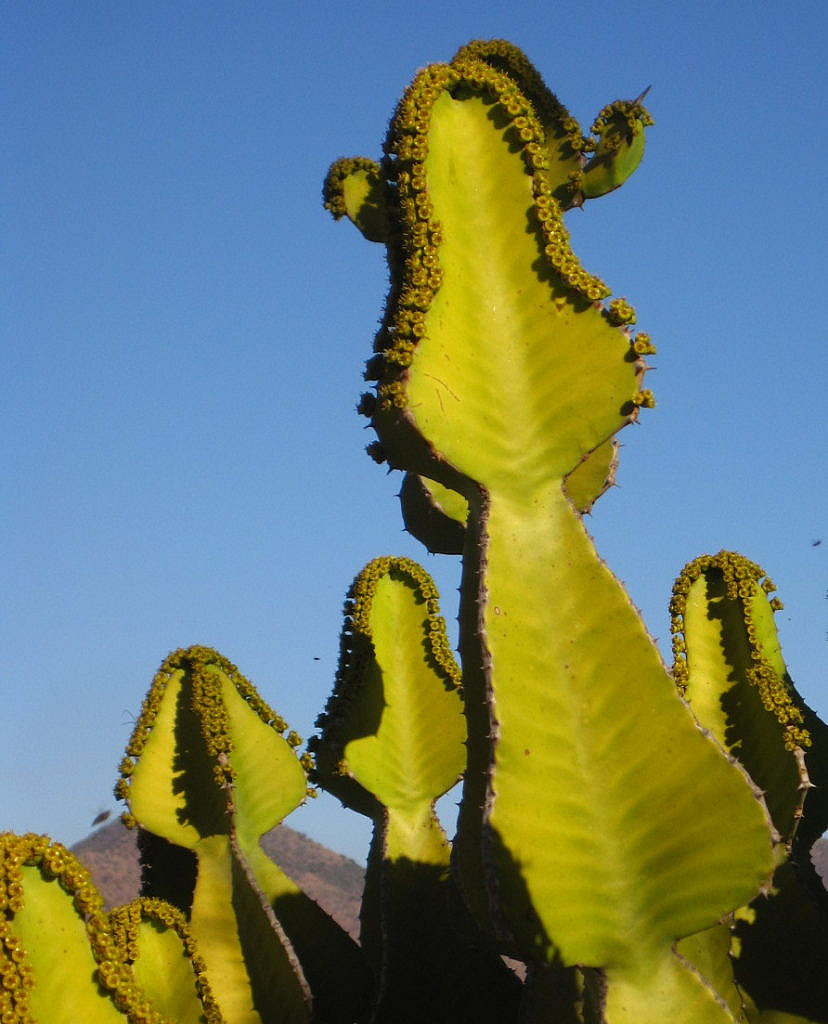 We’d also been astonished at two earlier sightings before we’d even reached camp. First a vehicle alerted us to a spotted hyena, whose furry head kept popping up out of a donga to peer inquisitively around. It eventually climbed out and loped over to the gnawed leg of an antelope, which it shook around a bit. Then, not much further, a sizable klompie of white rhino, among them a baby, ambling along unhurriedly. A not inauspicious start to our Kruger adventure. 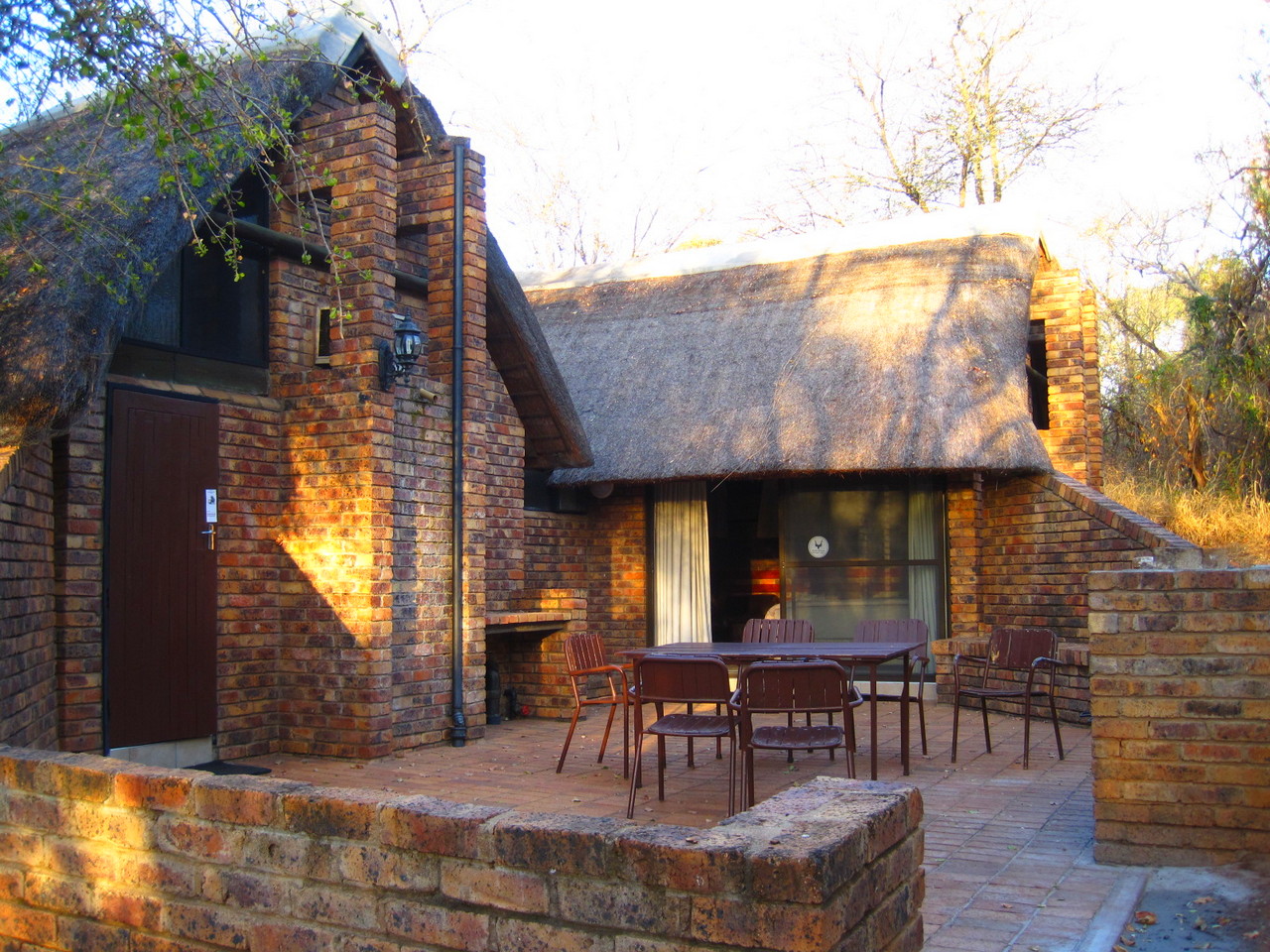 Our cottage has the weirdest configuration; you enter through the main bedroom, then the kitchenette has a bar with wooden bar stools against it but your knees hit the brick wall so you can’t actually sit there; behind this is a couch pushed up against a solid square table which itself is backed by two single beds … kitchen? lounge? spare bedroom? Shower’s hot, though. 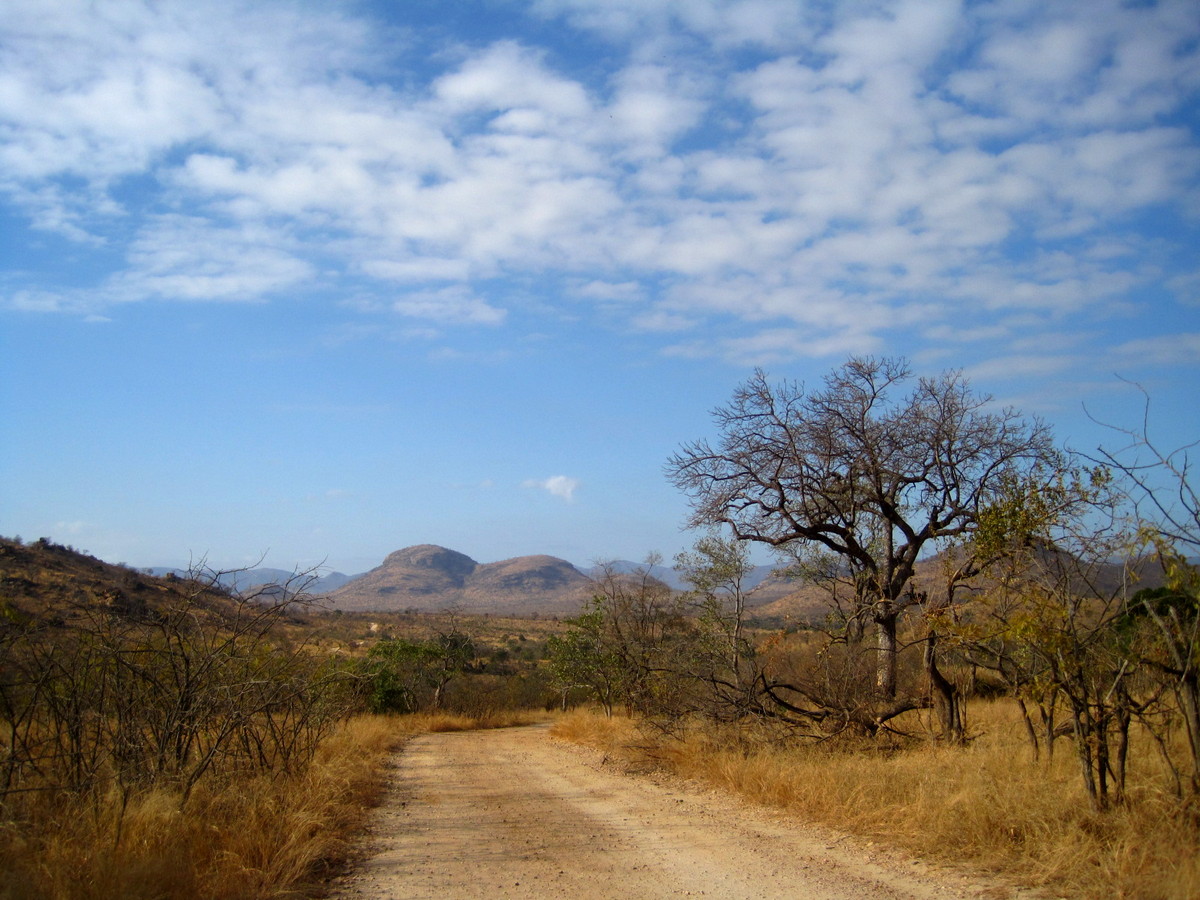 Ahhhh … this is true bushveld.