In these parts, temperatures leap from 5°C to 27°. It’s all a bit bewildering. From beanies and socks to summer tops and flipflops in the space of a morning. It was an early start for us today to accommodate a long day’s driving north, past Satara, to Shimuwini. 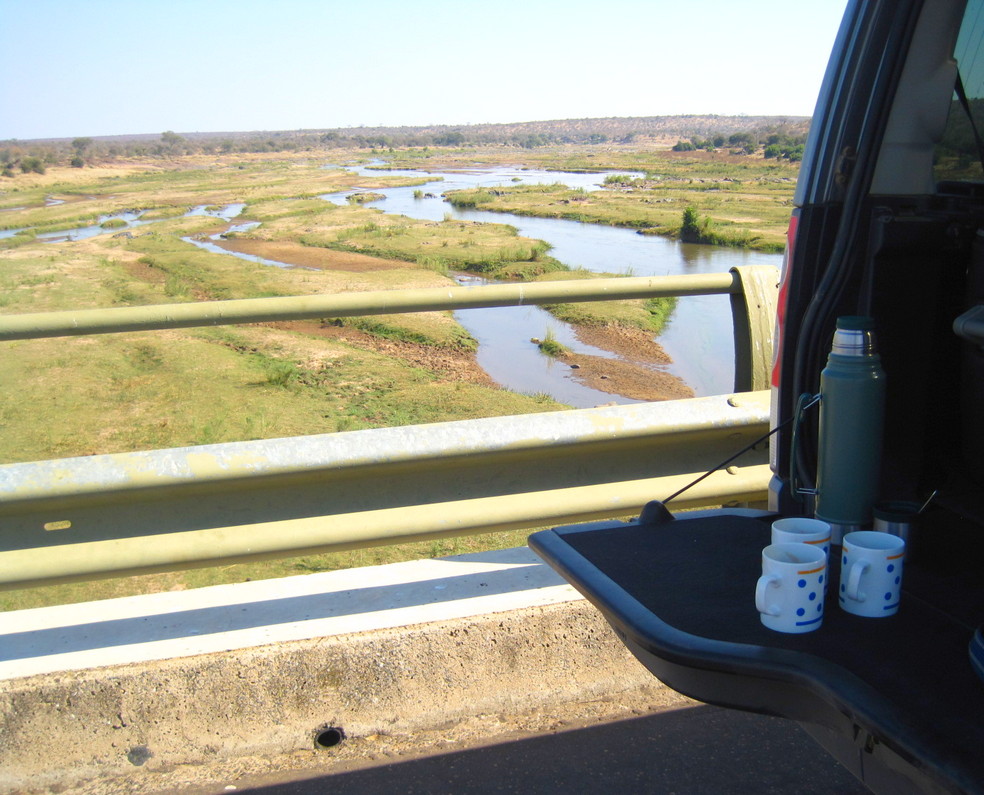 Coffee break overlooking the Olifants River on our way to Shimuwini. 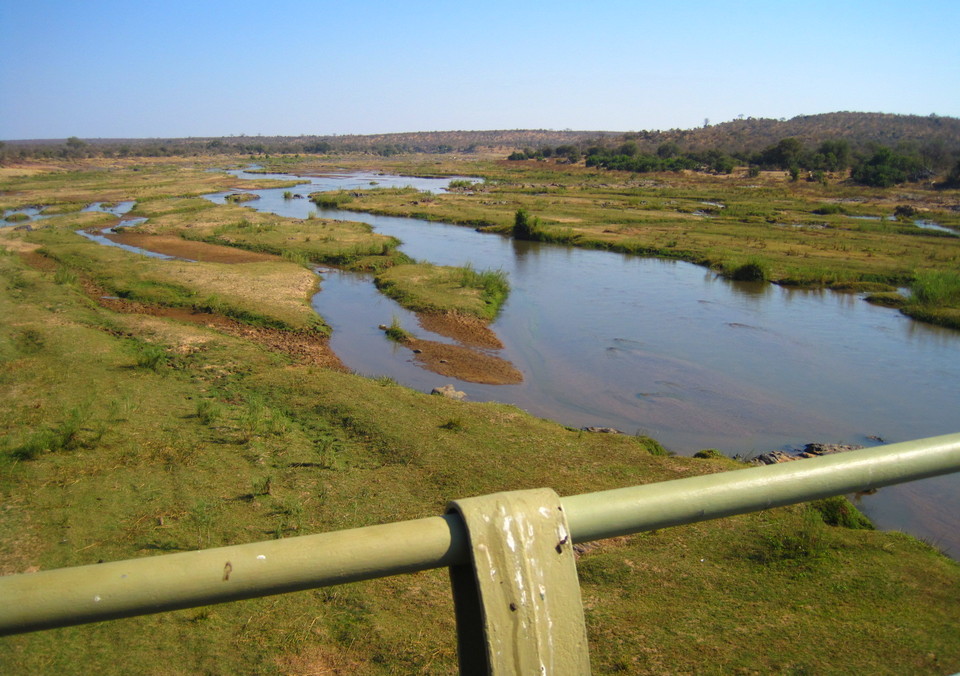 It’s amazing, too, how changeable Kruger’s ecozones are, linked closely to the different wildlife species you’re likely to see there. From tree savanna, where prolific groups of giraffe curve their long necks, to shrub and bush savanna where a multitude of elephant and buffalo hang out, to open grasslands with their large herds of impala, Burchell’s zebra, blue wildebeest, and a sprinkling of stately-horned kudu, and finally the dense russet-mopane shrubland, where it’s difficult to find a sign of anything at all. Unless you look very, very hard. (We did, and we saw things.) We were flagged down by three Americans in a tiny sedan who bleated that they hadn’t seen an animal all day. 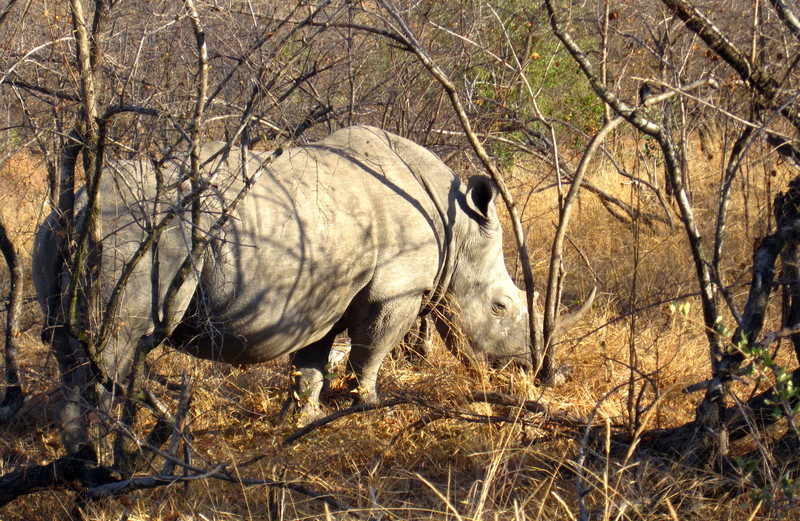 So close, even I could photograph it. Hey, I’m not telling where we spotted it!

This after we’d driven from the opposite direction, and had just encountered seven or eight female lions, among them a scruffy-maned male adolescent. It helped, of course, that vehicles were bunched across the road. We were lucky in that we’d just passed them all, still wondering what all the fuss was about, when two or three lion burst out of their cover and padded fast in our direction. But they were wanting to cross the road and were clearly irritated by the barricade of metal and rubber. This is the part I really don’t like about heavily frequented parks. One female — you could almost see her wince at the blockage — turned back and with head lowered and a purposeful air, loped past a few vehicles before seeing a gap and bounding across the road. She was followed in the same way by a couple more. The young male wavered several times, turning back often, then decided to walk a long loop past us and Keith before finally crossing. Lovely to see them, but horrible to watch how humans get in their way. 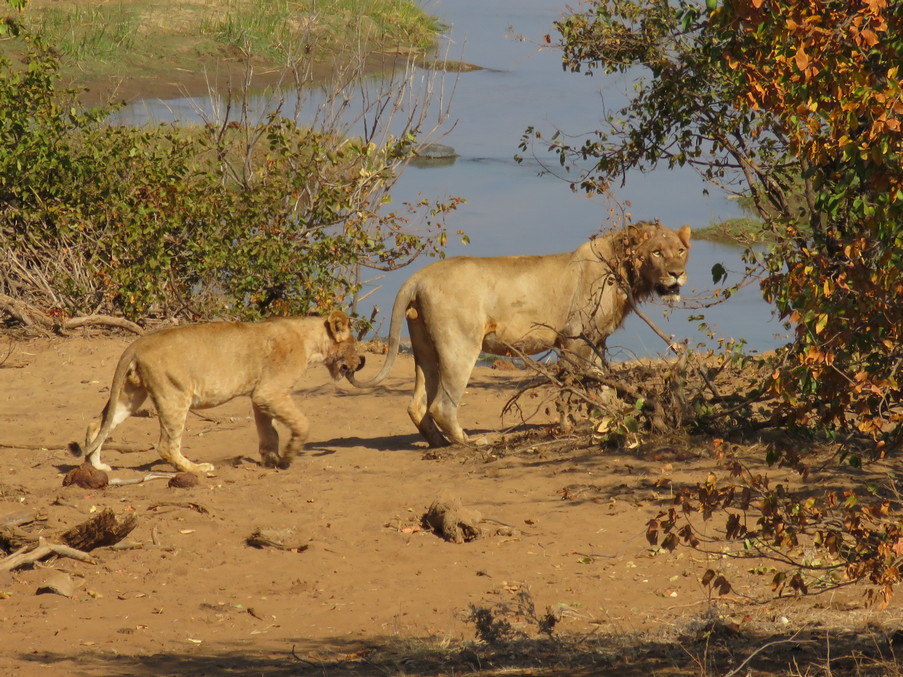 There were also long stretches of nothing. Animals are never where you think they might be. We passed kilometres of low yellow grasslands simply perfect for cheetah but they were conspicuously absent; large spreading shady trees under which lions should be sleeping; dense leafy woodland black rhino apparently revel in. Not to mention every single dry riverbed we’ve ever crossed and peered into and not even a lizard moves.

That said, we stopped for a beautiful Brown Snake-eagle, crest slightly raised and eyes very yellow, perched on a branch. And there was an impressive Martial Eagle sitting in a tree, one giant wing fully extended almost as if he was draping it over the leafy twigs. He also looked as if he was picking at some prey. Two black-backed jackals — the first we’ve seen on this entire trip — were sitting underneath the tree, hopeful for a few bloody scraps. Tawny Eagles, too, are not restricted to Kgalagadi. They’re prolific in Kruger. 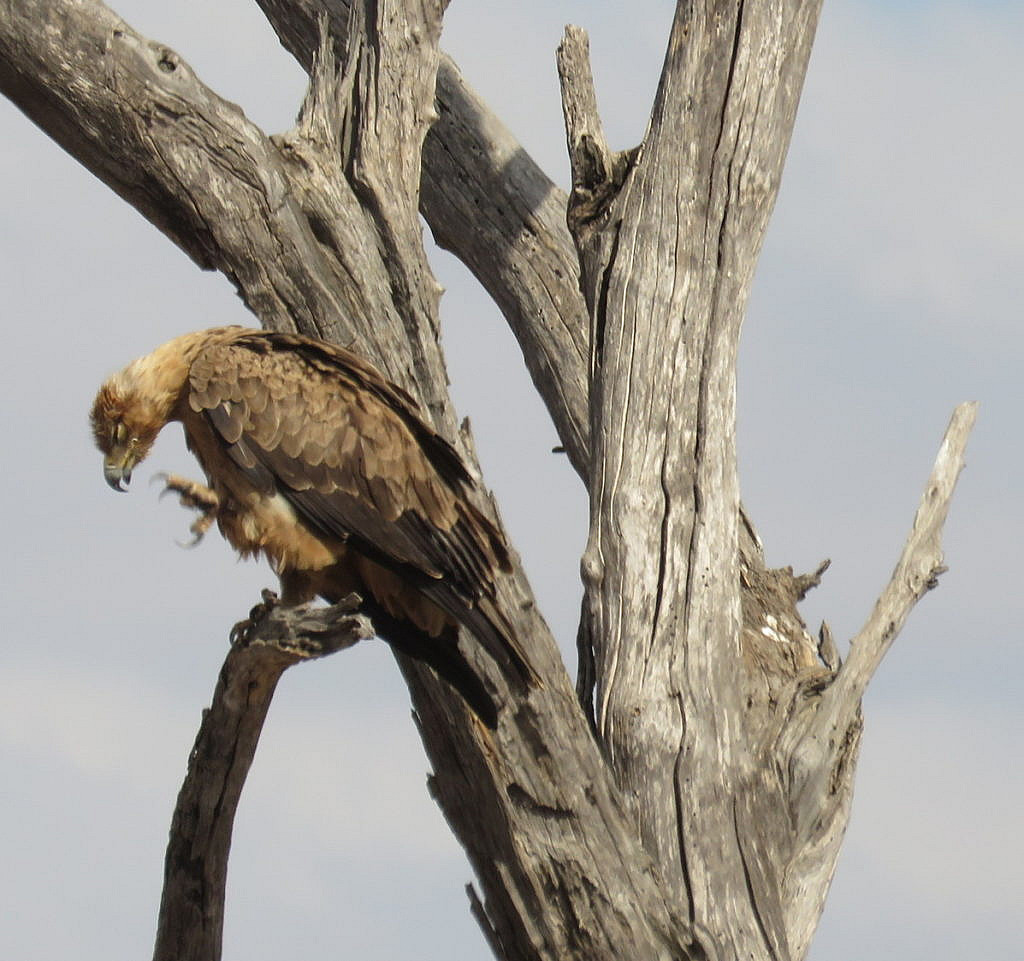 Tawny Eagle having a little scratch. 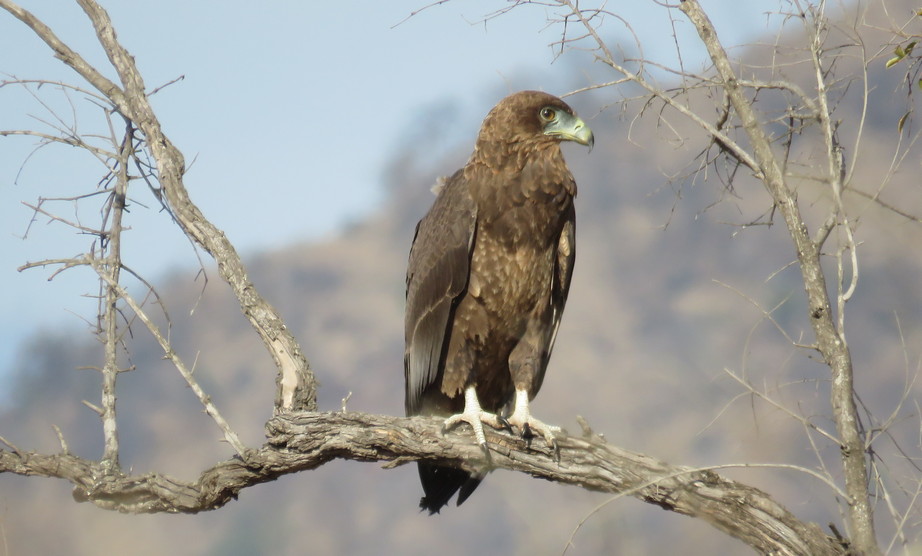 So, after many consecutive days of lo-o-o-n-ng hours of driving, we’ve decided that Shimuwini is the perfect spot to have a Chillax Day. The thatched units with airy, open-sided verandas facing onto a broad-flowing Letaba River filled with rocks and boulders are in themselves an attraction. There’s a resident pod of fat, blobbing hippos, elephant come down in the evening to drink, herds of impala, waterbuck, and elegant kudu move silently in and out. Crocs glide through the water, terrapins bask on the rocks, and troops of baboons pass by. There is also an unbelievable array of birds here. Besides the usuals such as yellow-billed and red-billed hornbill and arrow-marked babbler, we’ve seen brown-hooded kingfisher, golden-tailed woodpecker, crested barbet, kurrichane thrush, and brown-headed parrot. We also watched a crowd of Cape vultures (yes, Cape!) circle on the opposite bank where a White-headed vulture (really) was picking at some kind of prey. And we have a pearl-spotted owlet in camp (heard but not seen). 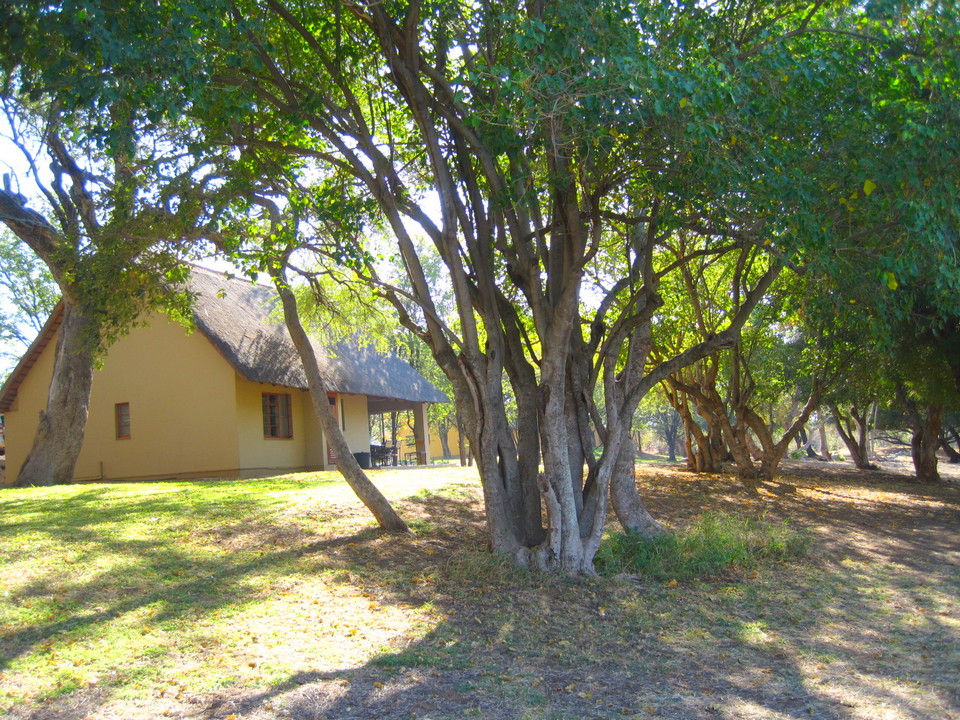 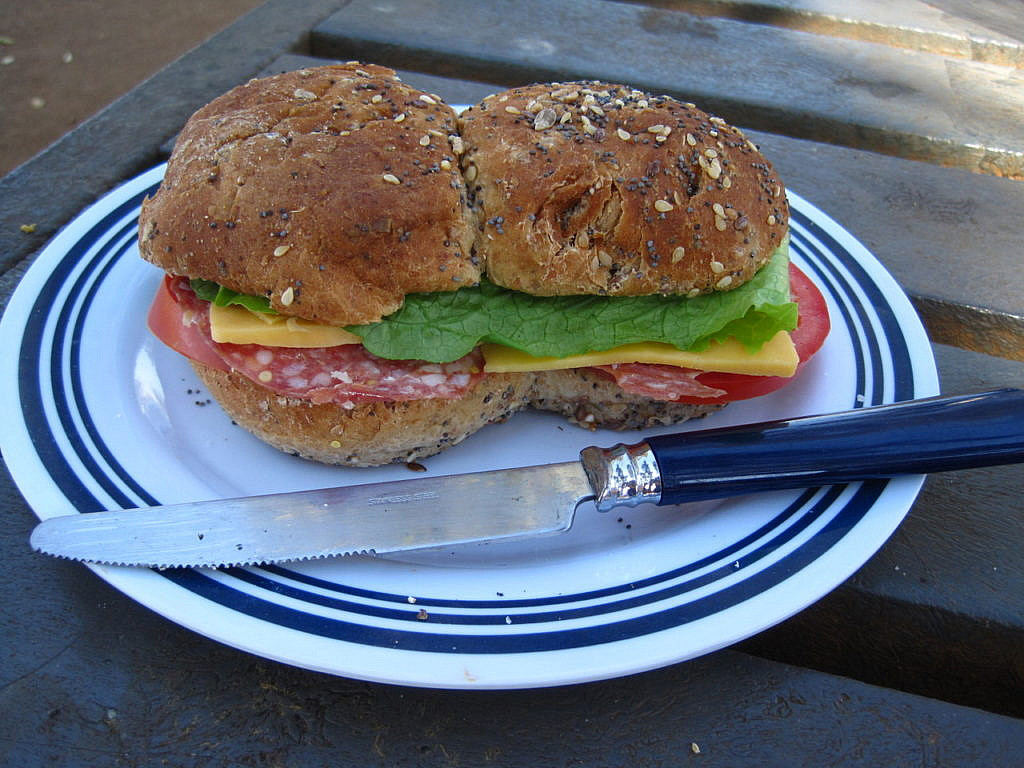 Scrumptious picnic lunch prepared on the back of the Landie wherever we are.