There is no logic in the bush. Nothing happens according to predictable algorithms. Life hinges simply on super finely tuned senses. Avoiding danger. Protecting your babies. Responding to the signal of hunger or thirst. You need just watch a stately kudu male picking a meticulously slow path — pause and listen, pause and listen — down the bank to the hidden pool of water. Or watch in wonder at plump hippos with the tenderest of pink butts and bellies soaking up the sun on the sand in heat you could fry an egg with (31°C). Weren’t we always told they had highly sensitive skins and couldn’t afford to get sunburnt? Or try not to solve the riddle of how the most significant sightings take place to either side of the tar, not the lesser, more remote, deep-in-the-bushveld gravel roads. 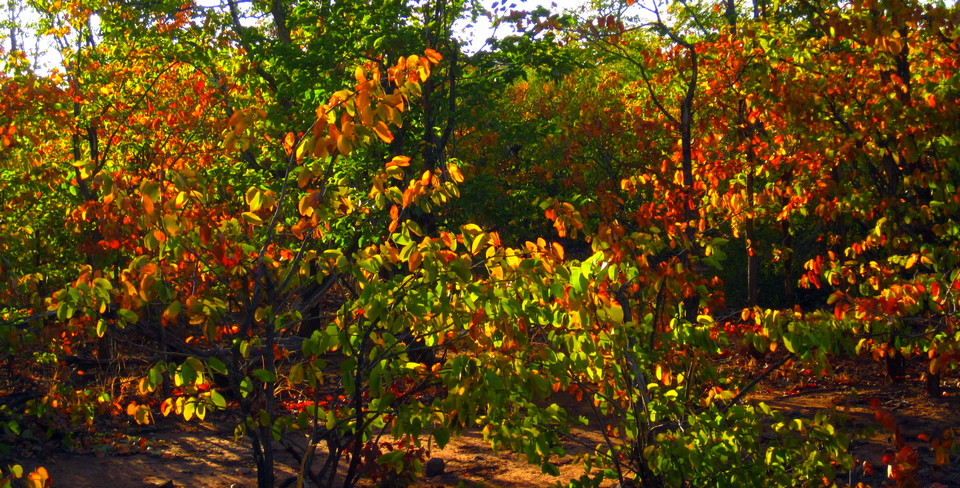 The camera just doesn’t do justice to the gorgeous winter colours of the mopanes.

Today was another example of those magic (fleeting) moments when two paths collide. Or not. An Afrikaans couple (many of whom are immensely willing to share) slowed to tell us about some lions draped over a rock near a set of powerlines on the way to Punda Maria. Which is where we were headed. Specific instructions delivered, off we set to seek. We found the powerlines. Three pairs of eyes working very, very hard could not find any rock (which included every anthill in sight) or a tail or a whisker.

Never mind. Maybe more interesting, we witnessed a travelling train of easily 300 buffalo crossing the road in a veritable dust storm. It was quite a traffic jam to patiently sit out. We’re also seeing some of the rarer wildlife species: a couple of small groups of tsessebe with their strange light-brown eyes, a few bands of beautifully sleek eland (first time this trip!), a pair of bristly-headed marabou storks in a skeletal tree at the roadside, two saddle-billed storks on a riverbank, and on two separate occasions, a Sharpe’s grysbok, very much resembling steenbok but a little more thickset and with tiny white streaks on its back. I’ve also seen, twice, a grey duiker which to me is more rhebok-ish in appearance (not in size) than duiker-ish. And we had a civet trundle past our fence last night, picked out nicely by our spotlight. That’s a newie for us!

Taken with my tiny Canon. Even I’m impressed! 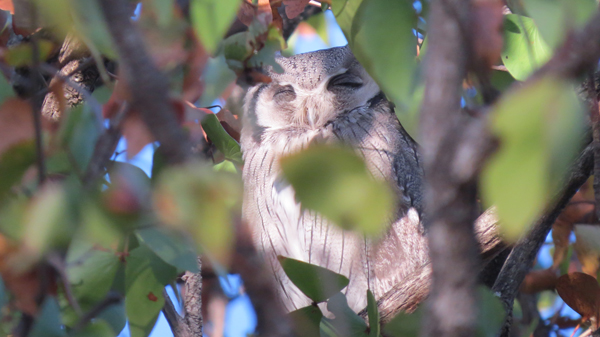 We also had a Southern White-faced Owl in our camp!

We’ve just hit the 1000 kilometre mark for distance travelled in Kruger, 2890 kilometres since leaving Knysna. By the time we hit the exit gate, we’ll have driven 1190 kays in the park.

Lovely witch-hat (or is it wizard’s?) anthills. I had to super-overexpose for the harsh sun, so trees are a bit washed out.

Tomorrow, our drive to Mapungubwe National Park to stay at Leokwe Camp for three days. There could be a break in internet connectivity for a bit … but stay tuned.