Why is it that for the second time in a row we book our stay in Mapungubwe to coincide with the Tour de Tuli?! Clouds of dust and the growl of vehicles as 300 cyclists converge on the confluence of the Shashe and Limpopo Rivers. Their little encampment is not somewhere we would like to be. 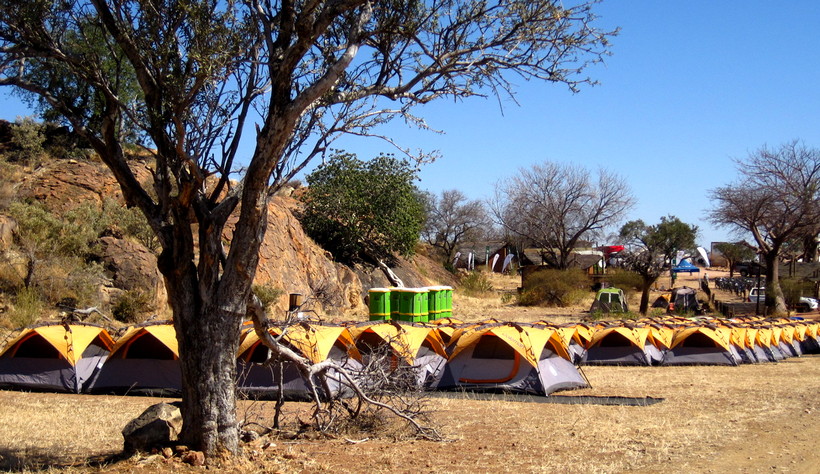 Does this make you want to be a part of it? 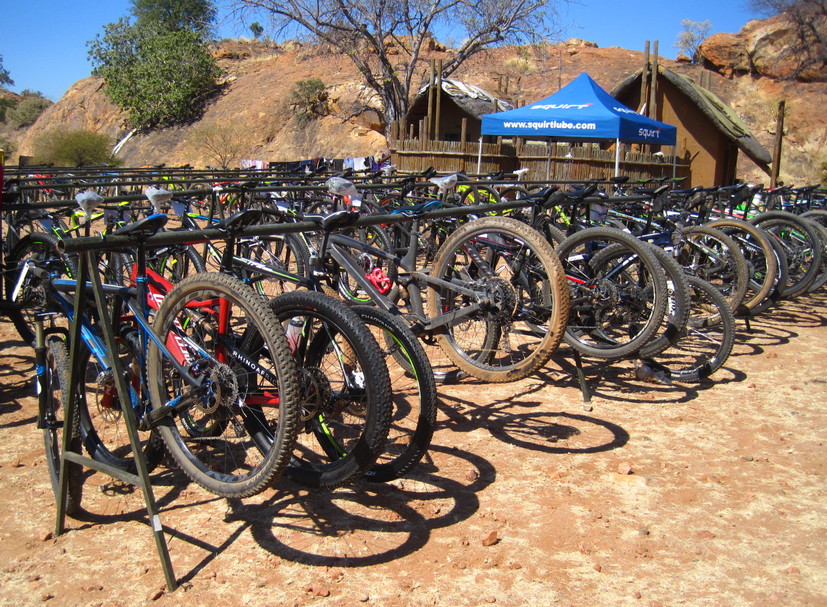 Cyclists … maybe this does! 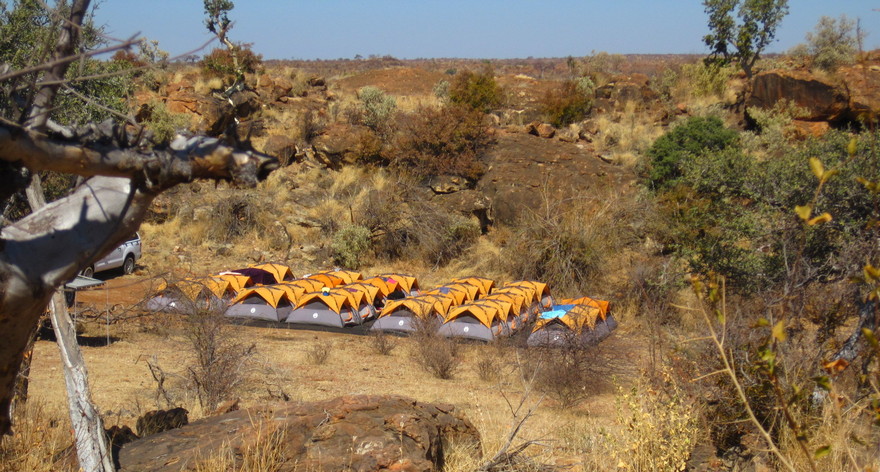 The Ladies’ corner. Below  Fresh and clean and bright … 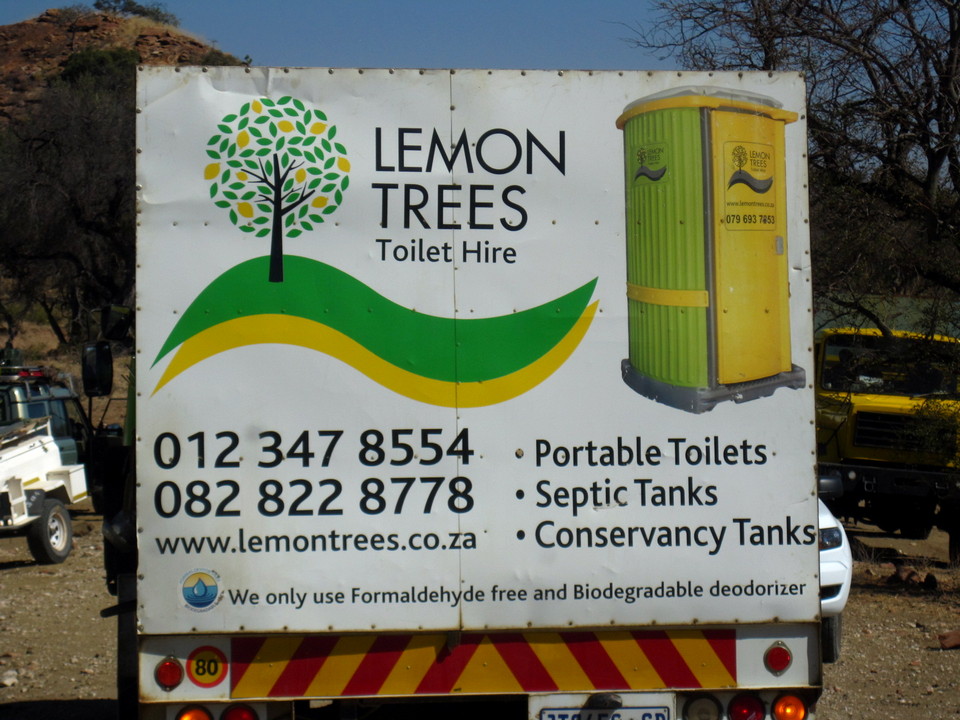 Our drive in to the park did contain a small frisson of (excited) tension. Not too far from Leokwe Camp we passed an enormous baobab so crammed with White-backed Vultures it looked like a giant pincushion. In Keith’s words: a macabre Christmas tree decorated with vultures. When we scanned around its foot, we noticed a bloated sandy-grey carcass with a hapless leg in the air. The vultures were being particularly cautious about dropping to the ground, so we’re convinced a cat (or two) of sorts was concealed somewhere there. Try as we might, we couldn’t find anything moving in the yellow grasses. 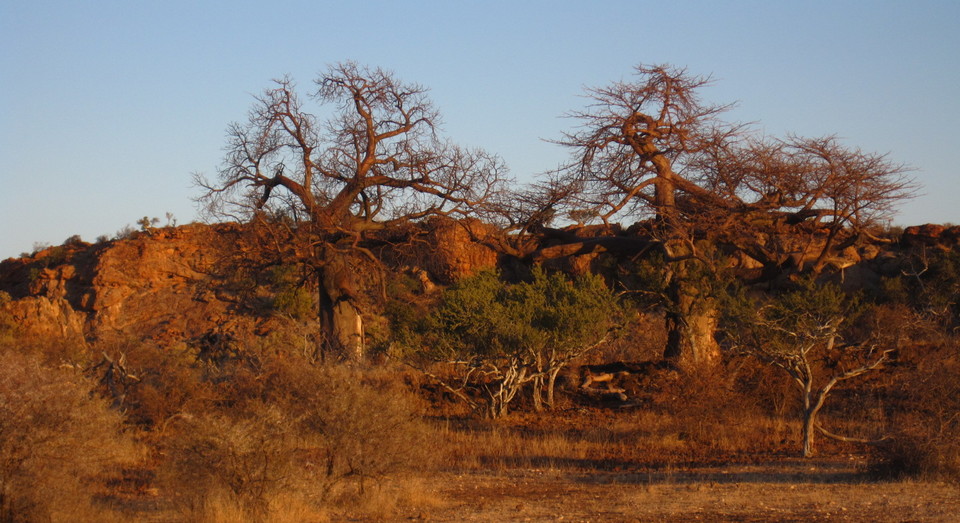 It being a half-moon at present, rising very late, the majestic night skies here rival those of the Karoo. The beautiful constellation of Scorpio above us was almost indiscernible it was so embedded in brittle pinpricks of light. The Milky Way is like a misty, wavy, wispy band of cloud arching overhead.

The following morning, we followed kitty paw prints in the sand all the way to a very dry waterhole surrounded by a rock ridge. Hirsh spotted a movement of something tawny-looking slink over the ridge, and that was that. One of those ephemeral moments. We will never know what it really was. 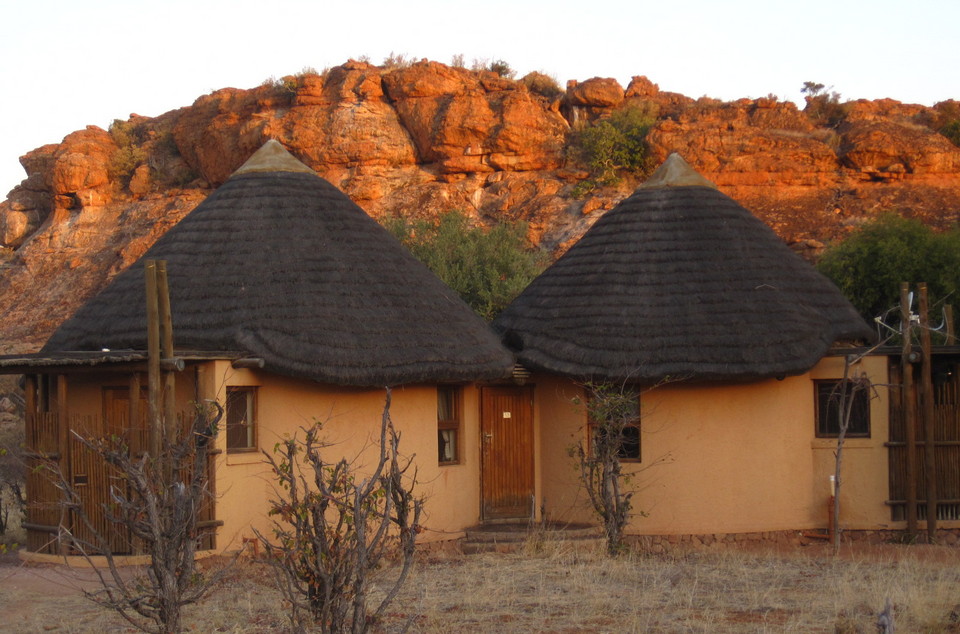 Leokwe’s chalets are lovely. Much care has been taken in the architecture and interiors, with nice wood features. Best part is the open-air shower protected by a stake fence. 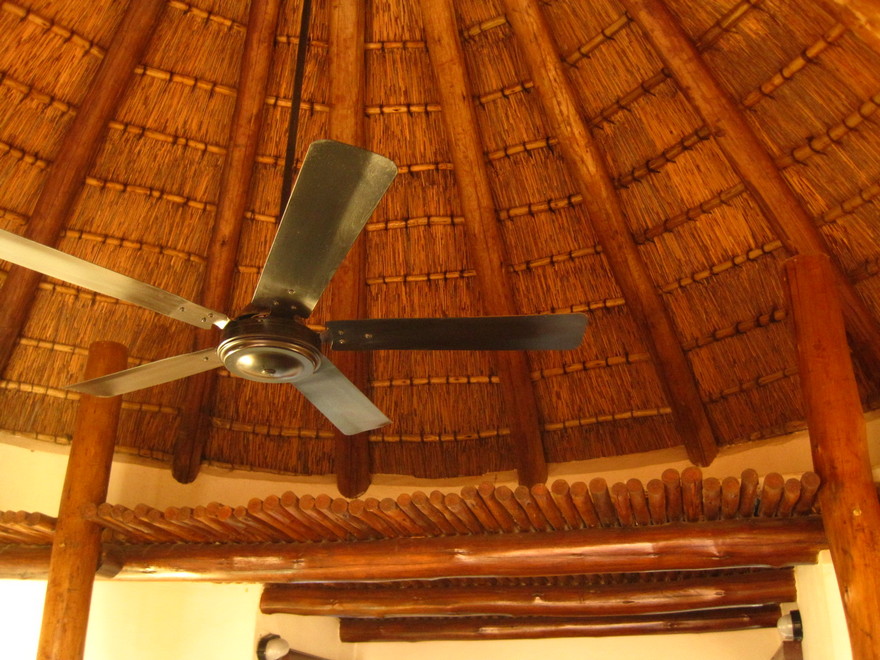 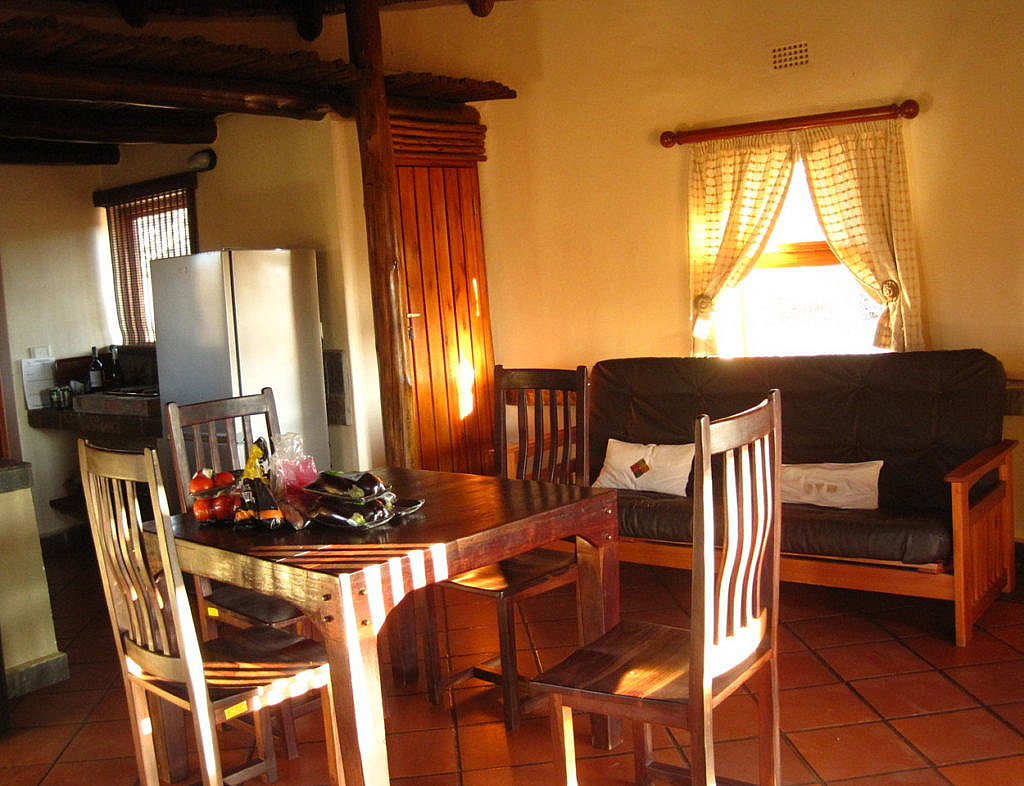 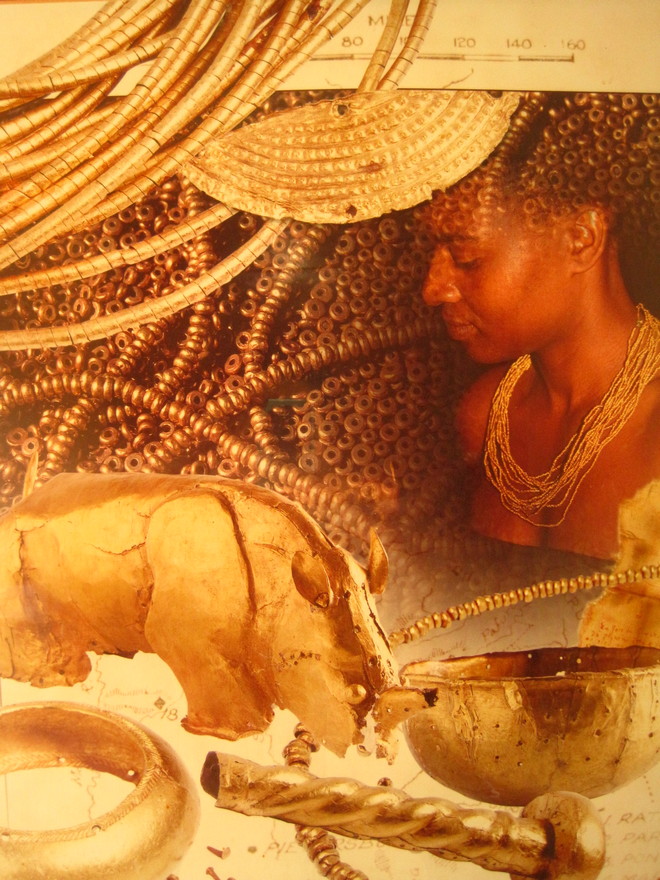 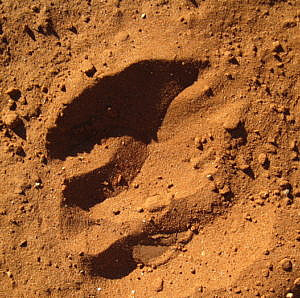 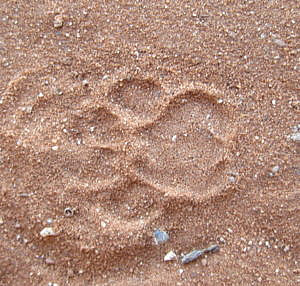 Informative photographs on the walls, animal spoor outside our front door: left  bushbuck or kudu, right  large-spotted genet (which we spotted one night)

So far the highlight has been a short (only 7 km) testing but quite exciting 4×4 trail called Kanniedood Loop (after a spiky-branched shrub with tiny leaves along its trailing branches, so hardy it “kan nie dood nie”, an allusion to the fact that it just refuses to die. Well, that’s my theory, anyway. Mapungubwe is a lot drier than Kruger, made up mostly of (presently) shrivelled mopane shrub with lustrous yellow grasses in-between.

After serious corrugations, the trail starts with a lot of rocking and rolling over embedded stone, there are stretches with narrow concrete strips to negotiate up and down hills, and a series of very steep rises and dips with small boulders and washaways to manoeuvre over. High clearance is crucial. Lots of fun. Not too much wildlife in the 30°C heat (we’re dead sure there are lions hiding out in the grasses!) other than small groups of impala, a few solitary zebra, and surprise, surprise, the first gemsbok of the trip. 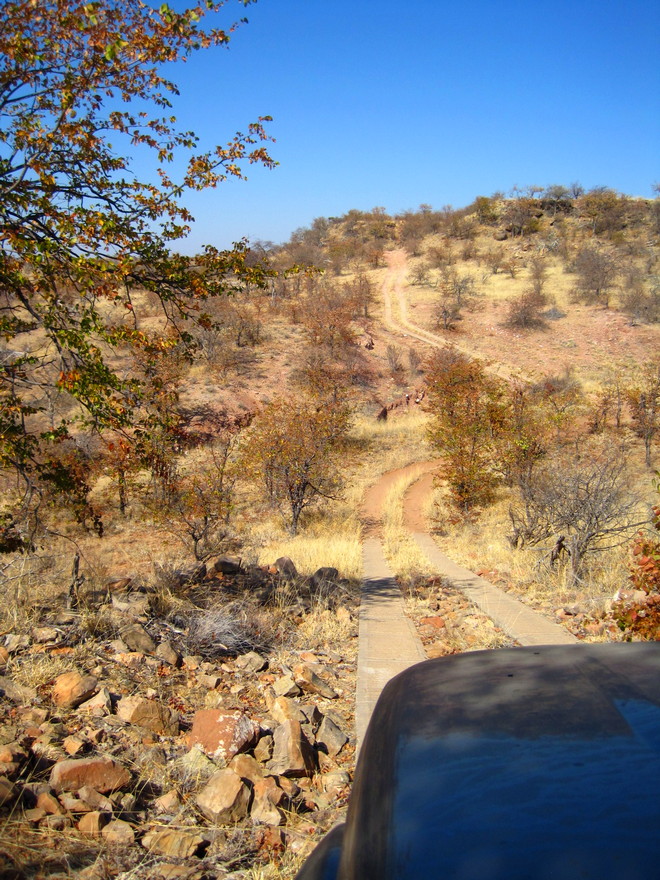 Doesn’t look steep but it IS steep…

Twice we visited the beautiful Schroda dam, an enormous expanse of water with a lovely thatched lookout, great place for a coffee stop (which of course we did). The first time, across the water on the opposite bank, we watched female kudu, impala and a crowd of gemsbok trip down to drink. The second time, two separate herds of elephant threaded their way through the mopane to line up, straw trunks extended all at the same time. A large pod of hippo had also appeared, and they were all gathered in the sun on the sand. Then a pair of fish eagles swooped and perched and cried to us. 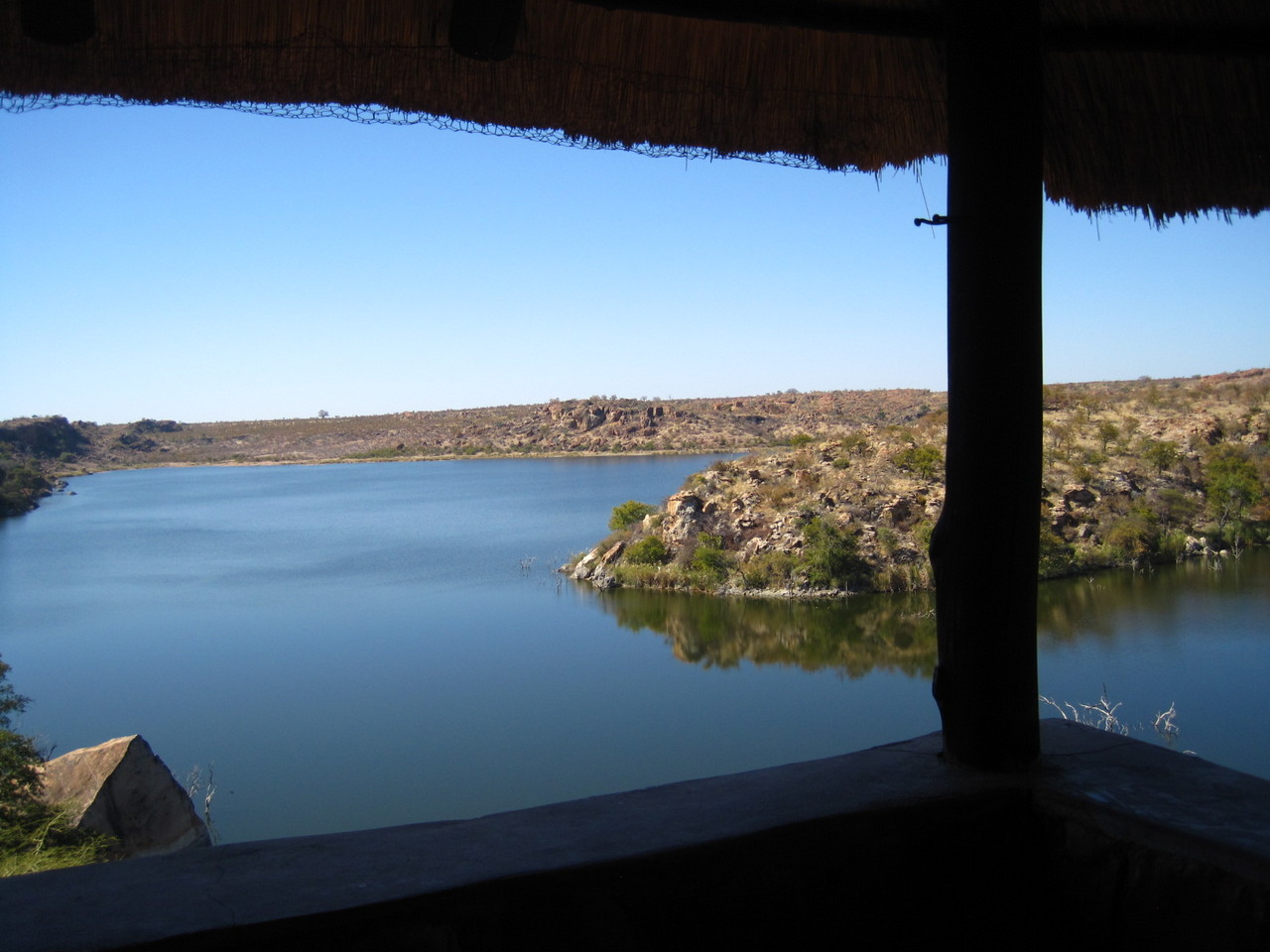 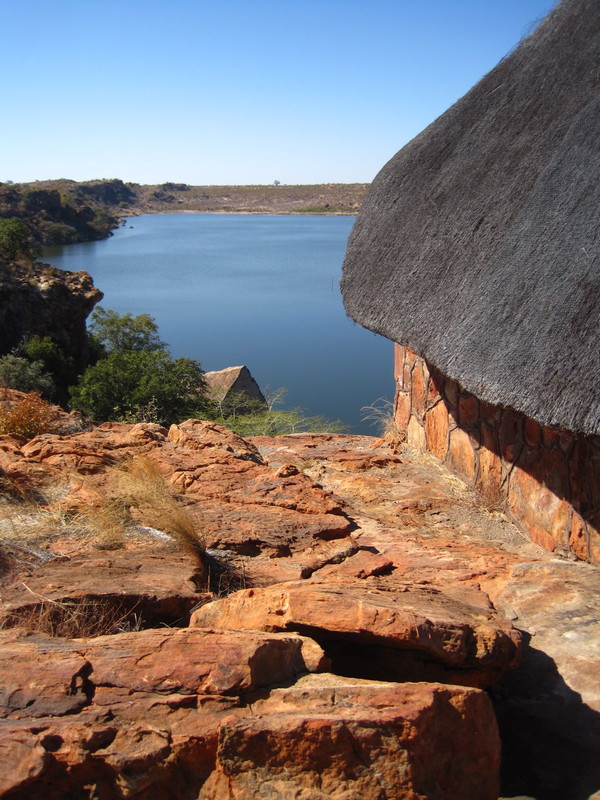 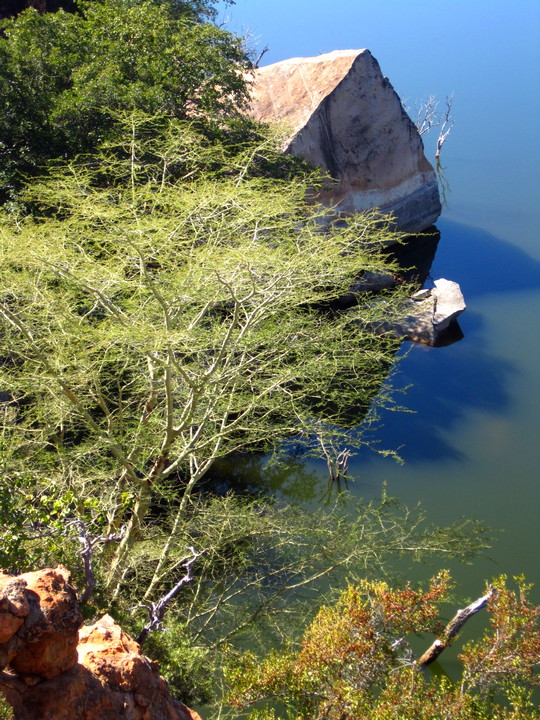 After hearing the lament of a lady at reception that she hadn’t seen any elephant, we’ve been very lucky, and have spotted large groups on three separate occasions, with another three solitary ones browsing quietly during one of our drives. Loving the rock outcrops that sprout out of earth hills, the rough blistered textures, the red-bronze glow in the dying sun, and the sallow white trunks of large-leaved rock figs that pour themselves over the stone with roots that slither and snake along rock crevices. 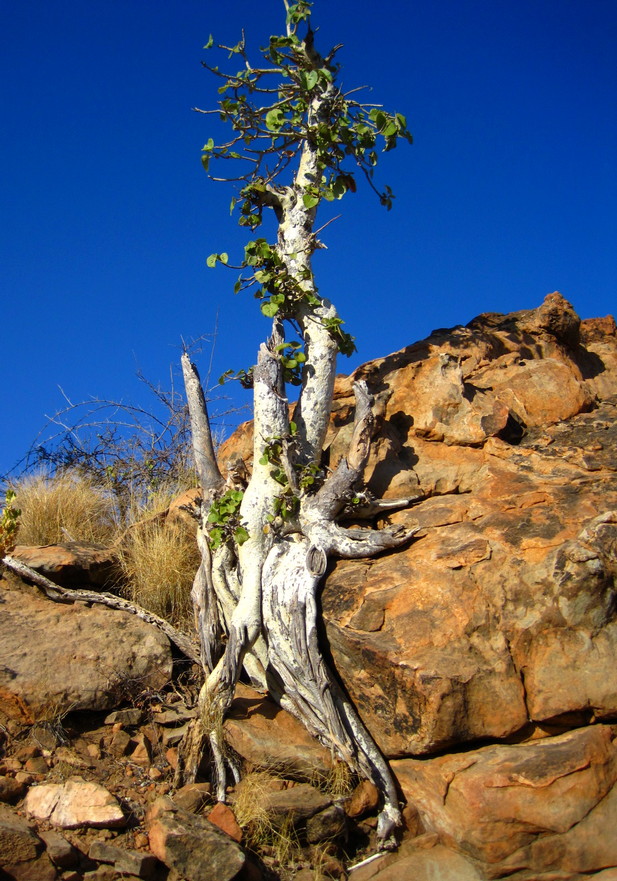 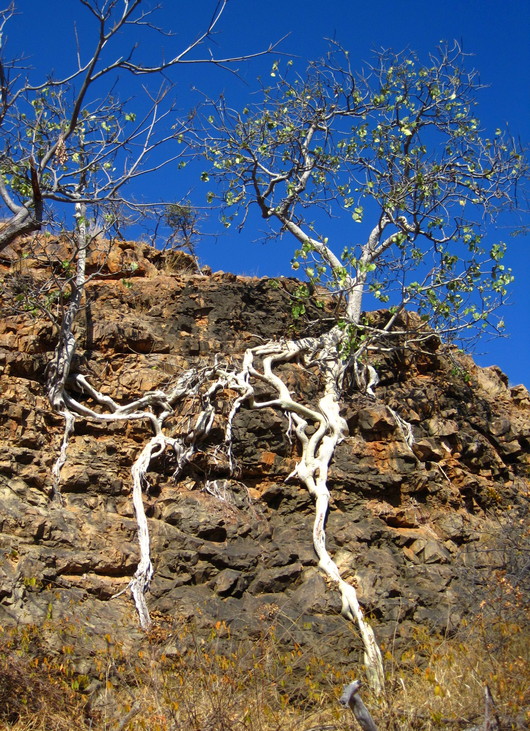 Tomorrow, it’s Marakele National Park in the Waterberg massif. Our adventure continues! Feels like we’ve been away for months, and it’s only been two weeks. 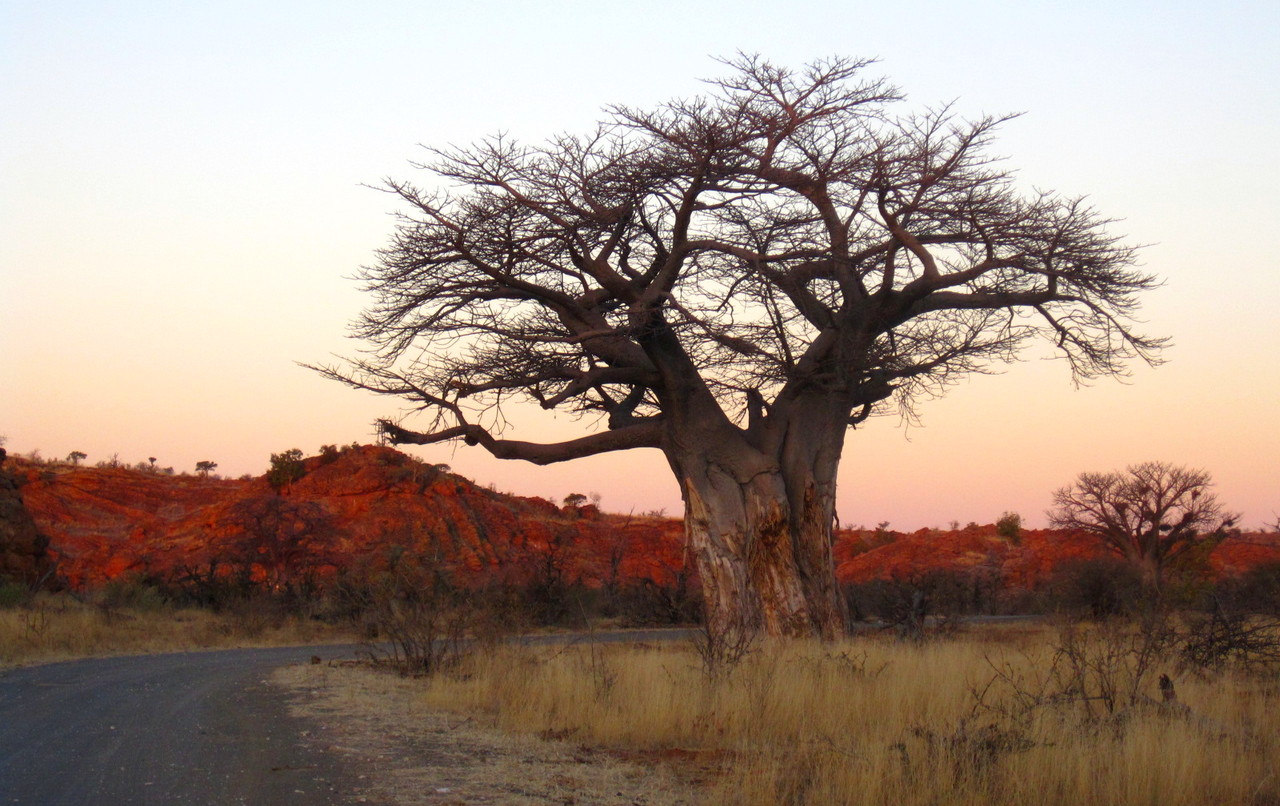