The roads in North West Province are execrable. Maintenance is seriously lacking, particularly on the R572, which unbelievably so is a secondary route to Zimbabwe. The tar is so badly potholed (“more like sinkholes” according to the drivers) that Keith, looking back from a distant hill, commented over the Zartek: “Oh, I see a cloud of dust, you guys must be approaching.” The edges of the tar are eaten away, high yellow grasses and thorn bushes encroach right onto the roadside, and in one section the tar was so badly eroded it more resembled the gravel road we’d decided to forego. “Definitely Rocks & Ruts territory,” commented Hirsh. The advantage was an absolute dearth of traffic on the road. So through mopane veld and grasses, then acacia thornveld, we bounced and swerved and swore. 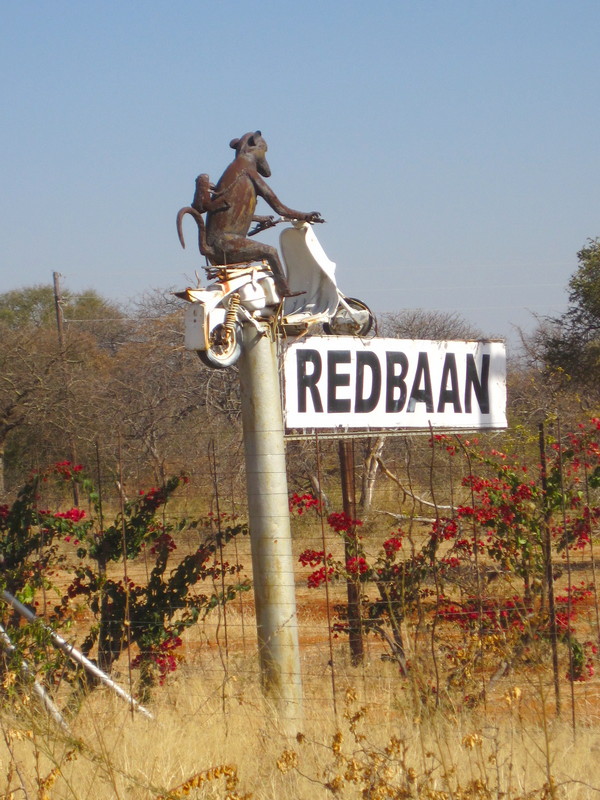 A sign with a difference for a farm along the R572.

We have done just over 3,500 kilometres in only two weeks. It feels like we’ve been away for months.

The last 200 km to Thabazimbi were on decent tar, running through large sprawling farms and thornveld all the way, taking into account the necessary vigilance for goats, cattle … and monkeys, lots of them! “They’re really cheeky,” said Keith,”they sit right at the edge of the tar and just stare up at you.” “Would you prefer it if they waved?” asked Hirsh. 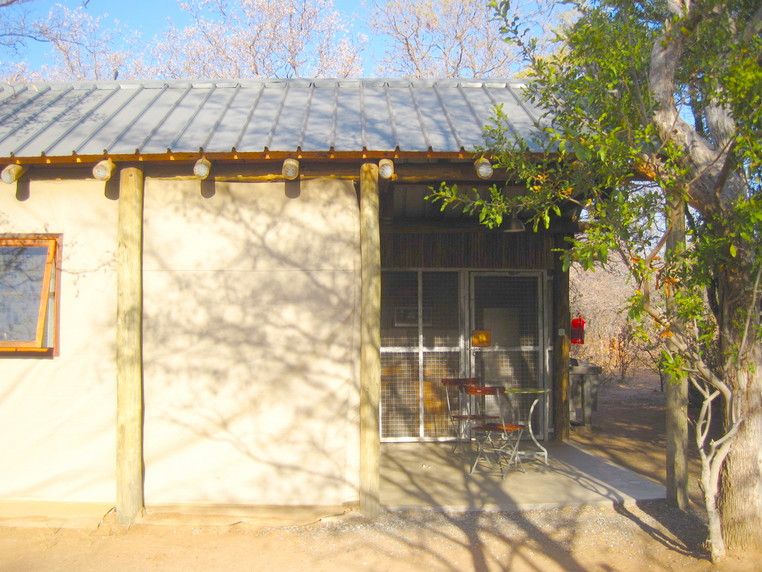 The exterior of our tented unit, kitchenette to the right. 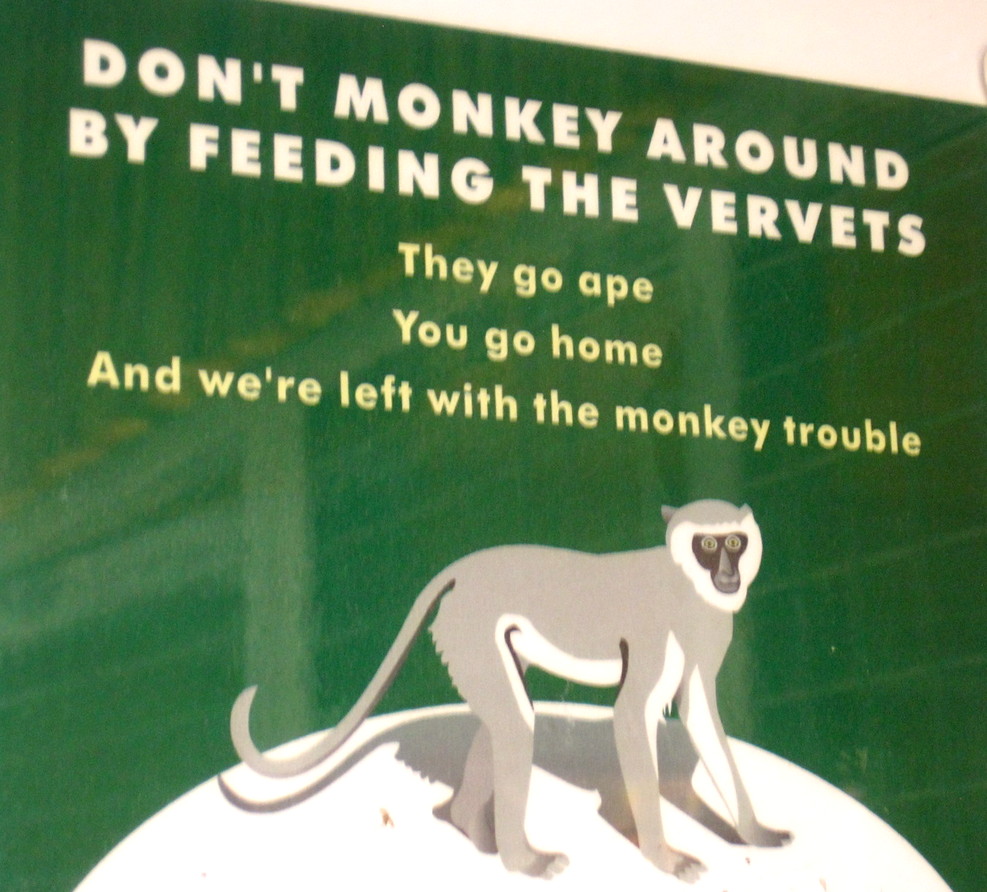 Witty way to warn about monkeys.

We simply loved Bontle Tented Camp. Set in the midst of woodland, the bedroom with gauze-covered glass windows, is entirely of canvas on a screed floor, the modern bathroom rough-plastered brick. Adjacent is a seriously monkey-proofed kitchenette, well appointed. The tents face west, so the afternoon sun pours in, filtered through a tracery of branches. The night was seriously freezing, though … back to 5°C! Long sleeves, leggings and an extra blanket didn’t quite cut it. The constant bellows and grunts of lion throughout the night, and the whinnying of jackals made up for it, although we suspect the lions were on a neighbouring game farm. 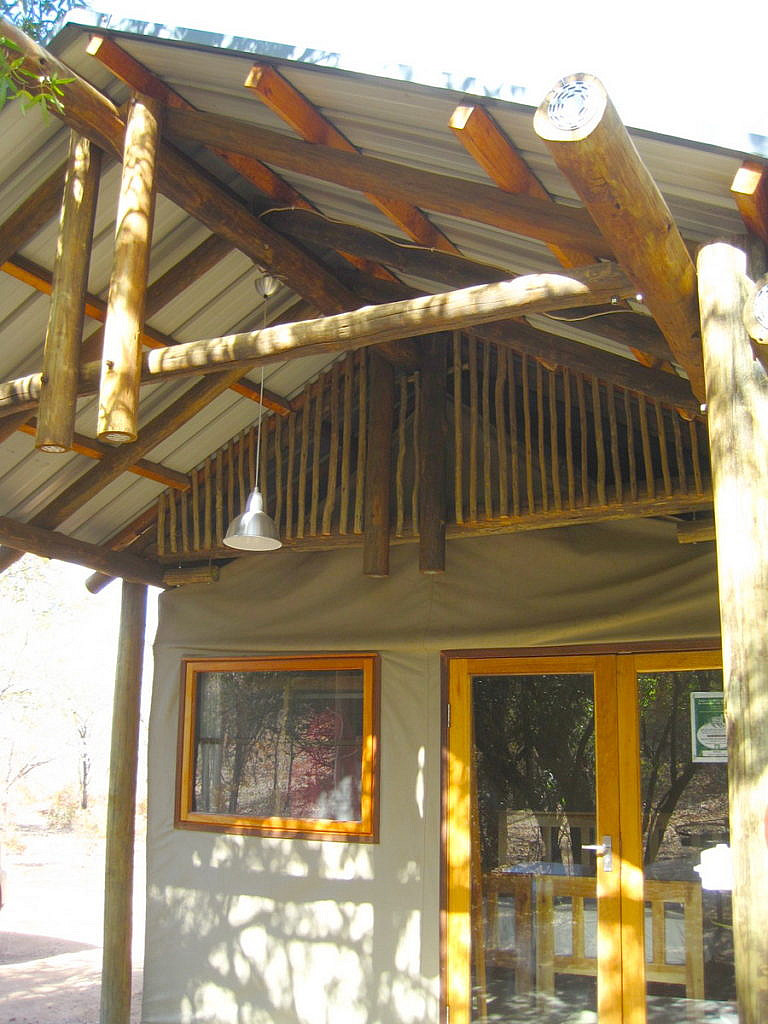 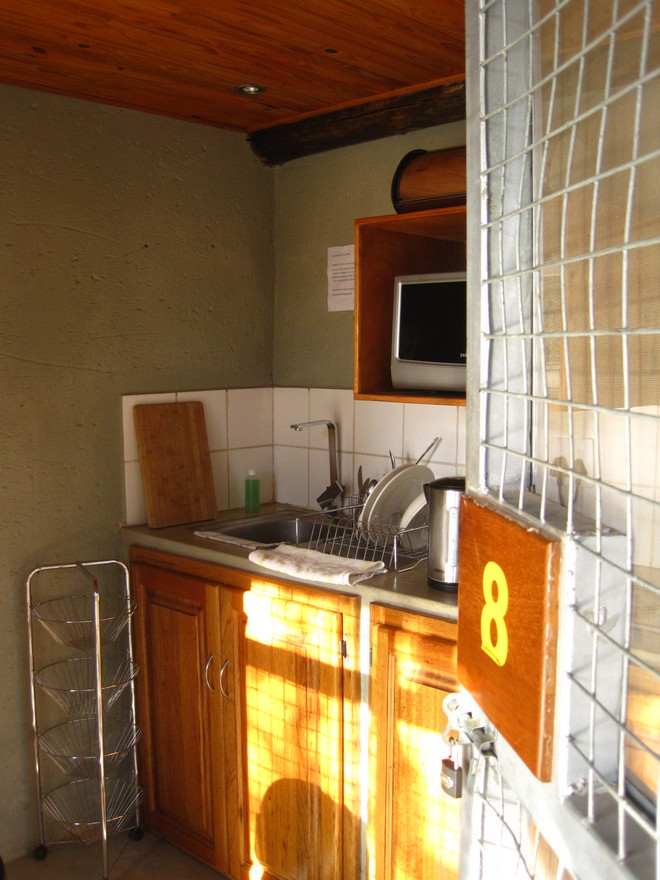 So impressed with our tented unit. Right Our monkey-proof kitchenette, notice the grid screen and padlock on the door. 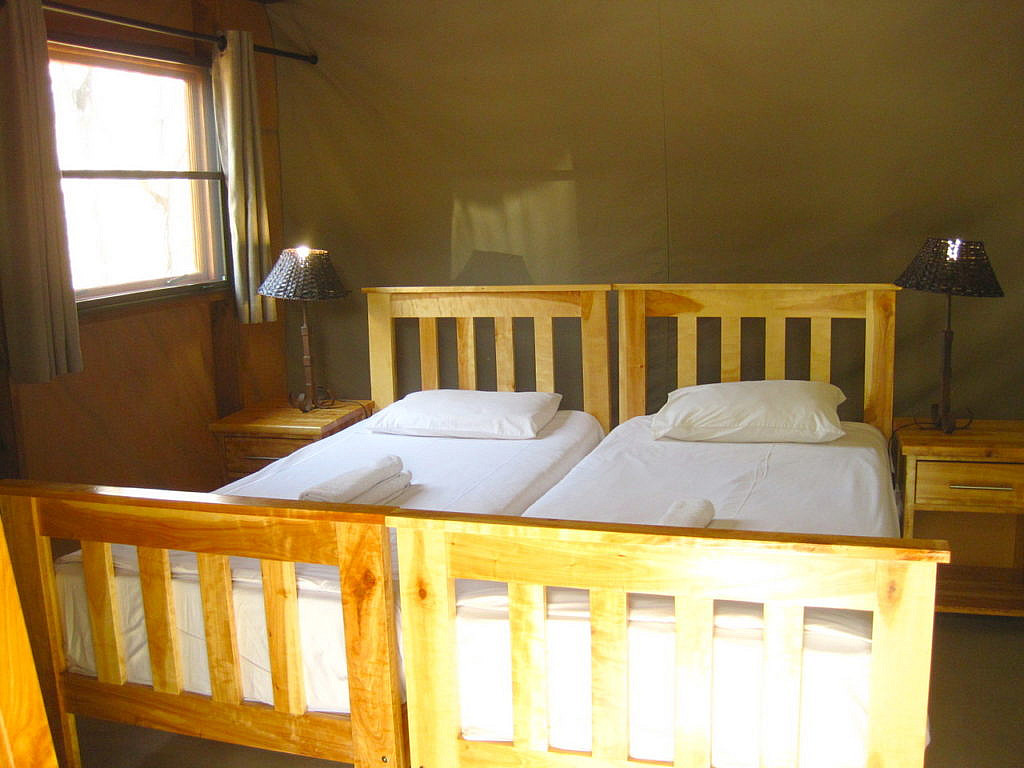 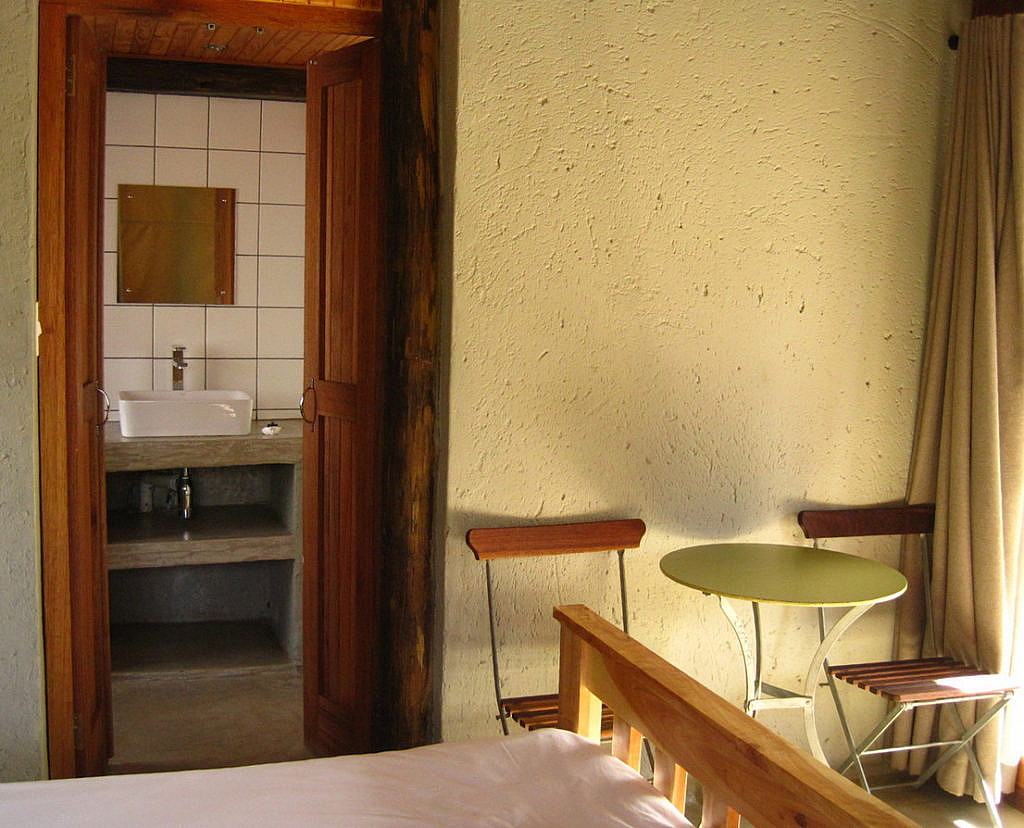 A little seating nook in the bedroom, and the door into the modern bathroom. 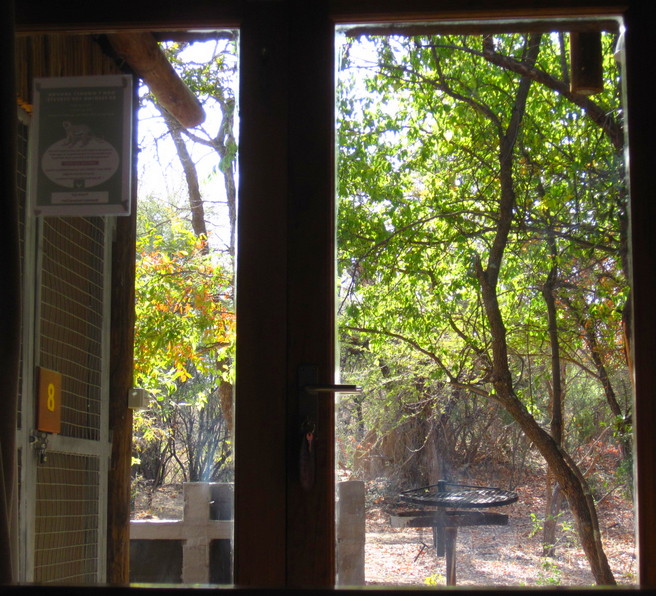 This is the view from our bed.

Marakele can be a very frustrating park because of its tight-knit woodland and mopane scrub, and its wildlife is well spread throughout the reserve. The X-factor, though, is its truly majestic rock mountains, rounded sandstone blocks packed tightly like giant molars on high ridges. It’s all part of the Waterberg Biosphere Reserve. There are plenty of high-placed spots from which to do a detailed scan of the landscape, and in spite of fresh rhino middens all along the roads, simply nothing was moving in the yellow grasses and acacia shrub. 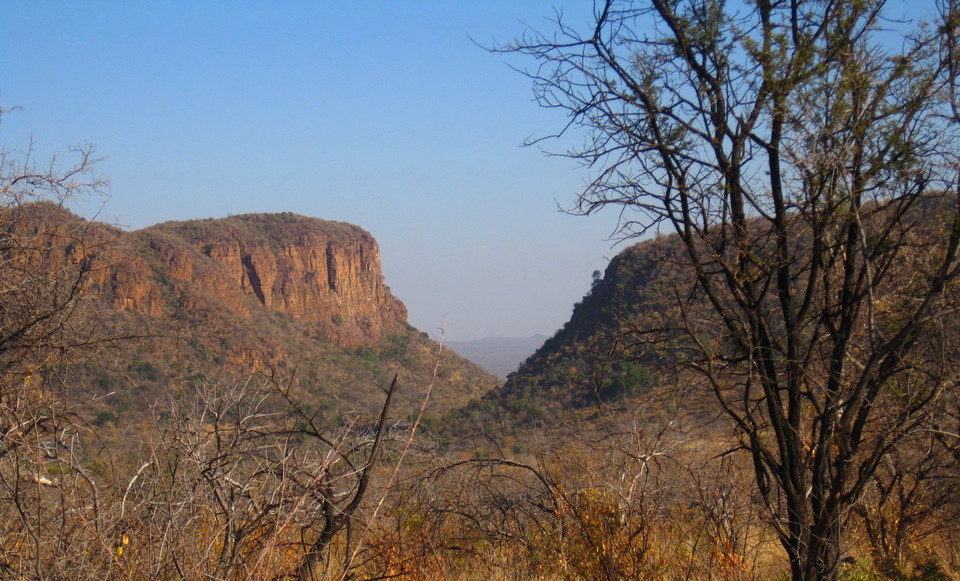 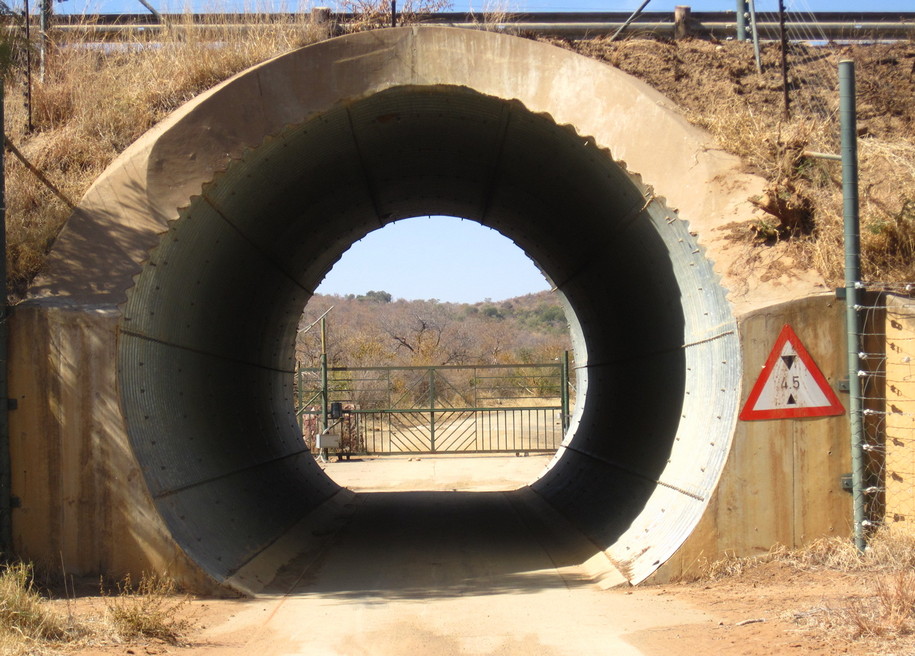 A causeway with an electric fence separates the cats section from the antelope and rhino. Needless to say, we encountered no lion, other than those we heard from a neighbouring farm.

We did manage to find a sizable elephant with big tusks on a mountainside, then a white rhino in the shrub. And while drinking coffee on a hill overlooking the Tlope Dam, up popped a herd of at least 20 elephants over the ridge, grazing peacefully like benevolent guardians right above us. 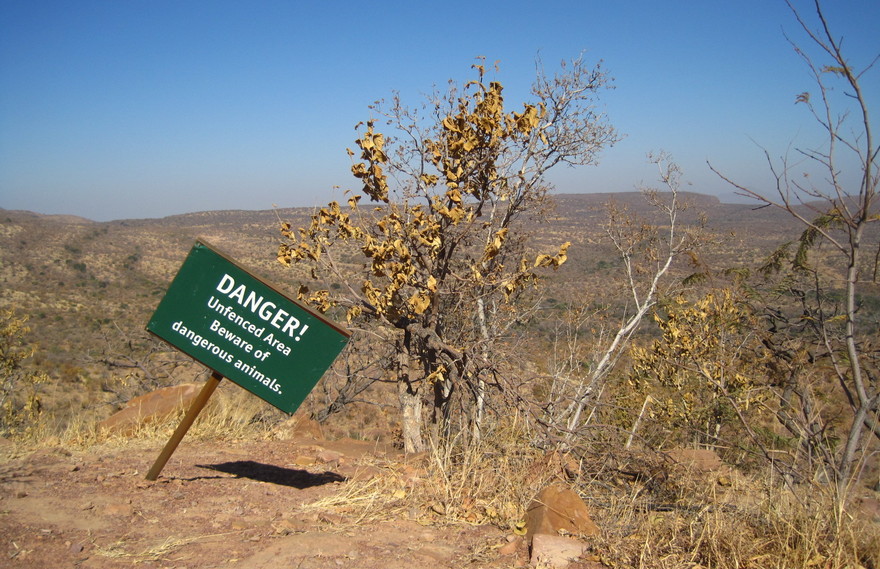 Our coffee spot at the top of a mountain. The risk is your own … 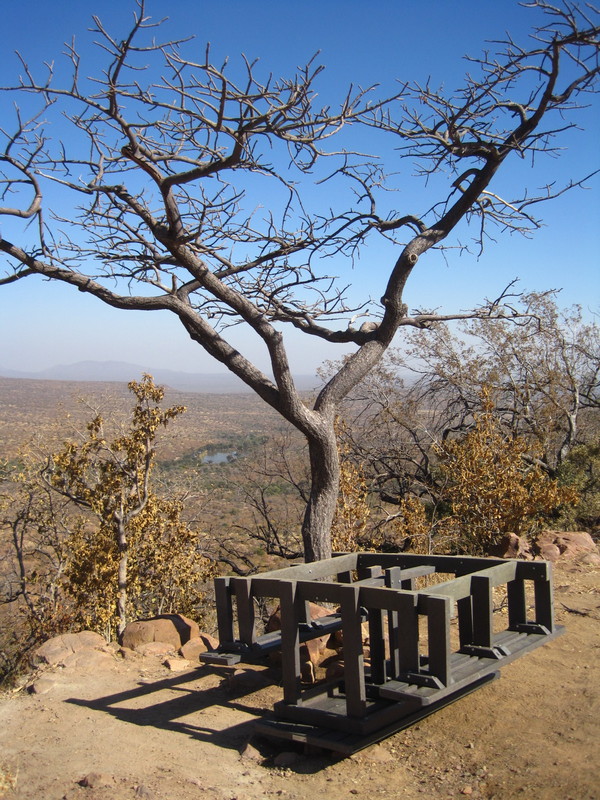 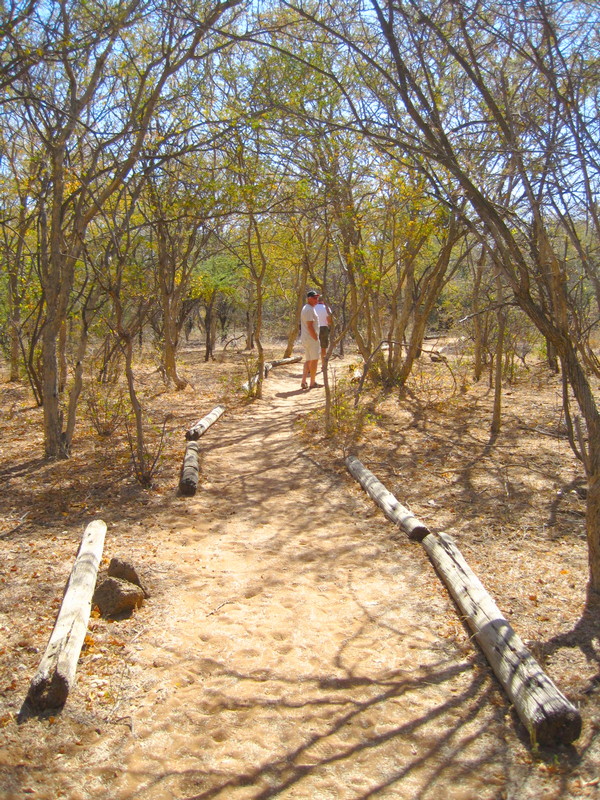 This overturned picnic bench and table obviously irritated an ellie. The dam in the background is where we’ll be sleeping tomorrow. Right The woodland areas are beautiful; this one leads to a bird hide and muddy water source. 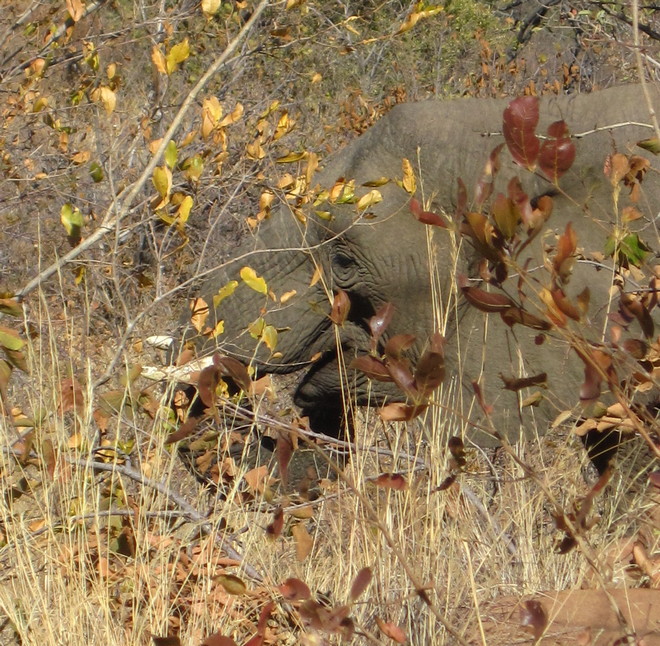 My own photo of an ellie! (Also the buffalo, though light was a problem.)

We also had sporadic sightings of buffalo, Burchell’s zebra, giraffe, kudu, waterbuck and grey duiker. Not too shabby, after all. My highlight was the back end of a caracal, clearly startled by our vehicle, which immediately scampered. Not before I caught sight of its tufted pointy ears. 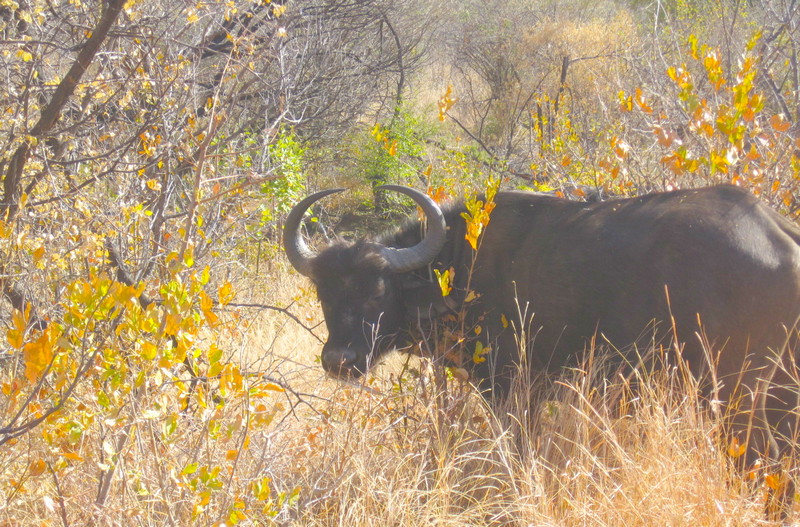