We’ve been to Mokala many times, and loved it, but what we weren’t prepared for was the absolute magic of Haak-en-Steek, a reasonably recent addition to the park’s accommodation options and one we’d never tried before. The word ‘camp’ is misleading, although there are three small very basic camp sites nearby. But we were expecting a rustic no-frills chalet, considering that only solar power and gas are used. What we found was an attractive, thatched, nicely appointed bricks-and-mortar house with lots of glass and sliding doors. 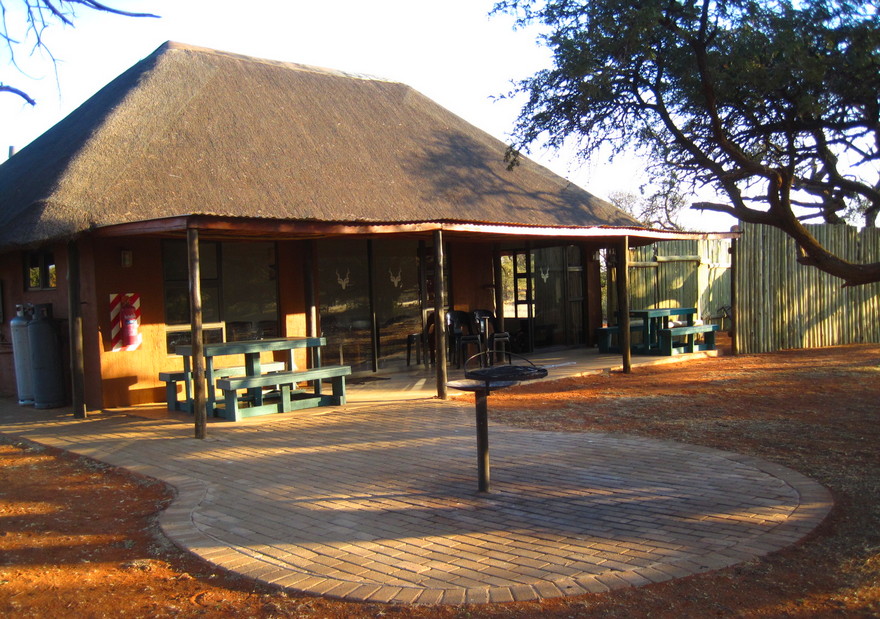 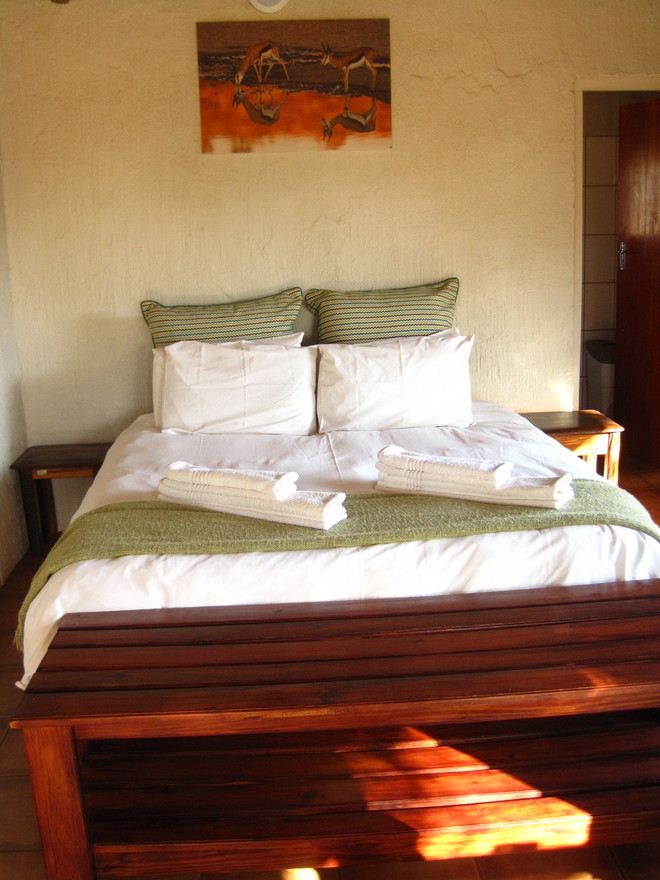 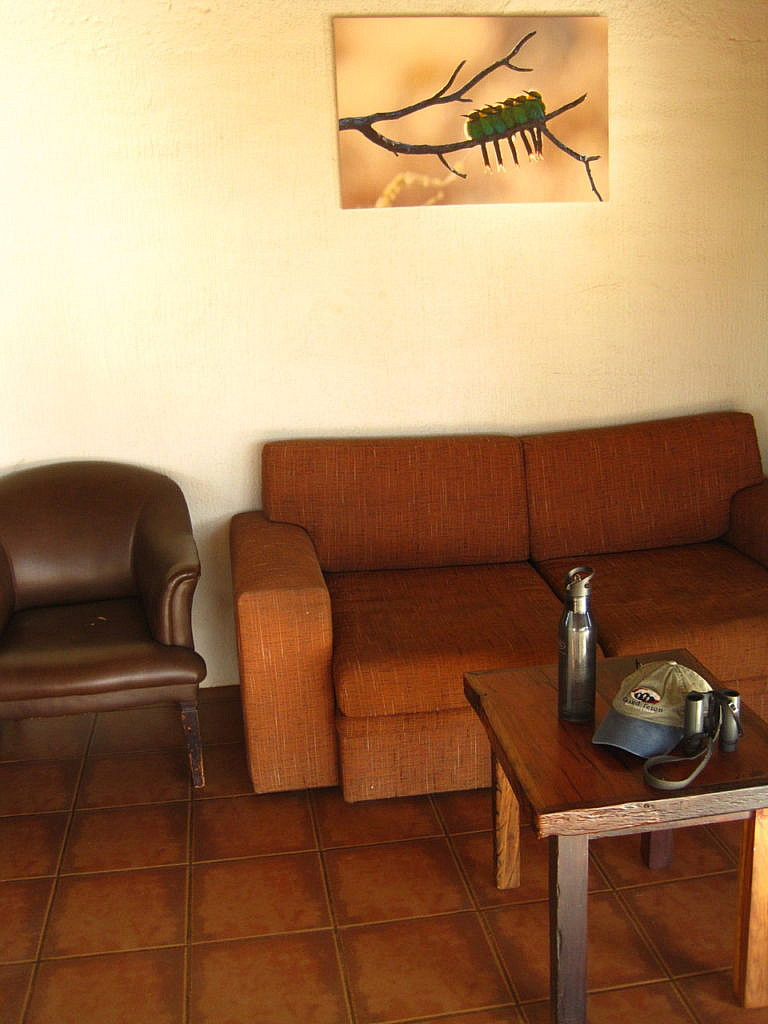 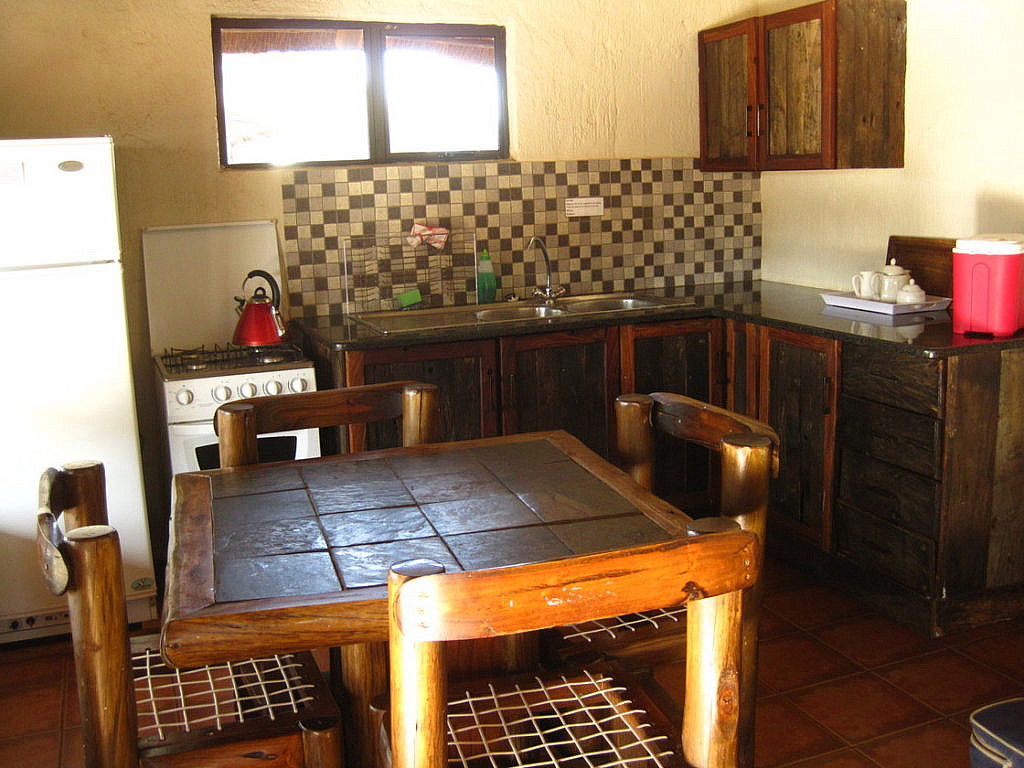 The best part is a natural and also a small solar-pumped waterhole situated right in front of you, some 120 metres away. In the time it took to enjoy a (very) late lunch at the benches outside, warthogs, a springbok, a gemsbok, and a regal male kudu had all cautiously drifted in and out to slurp and splash through the mud. 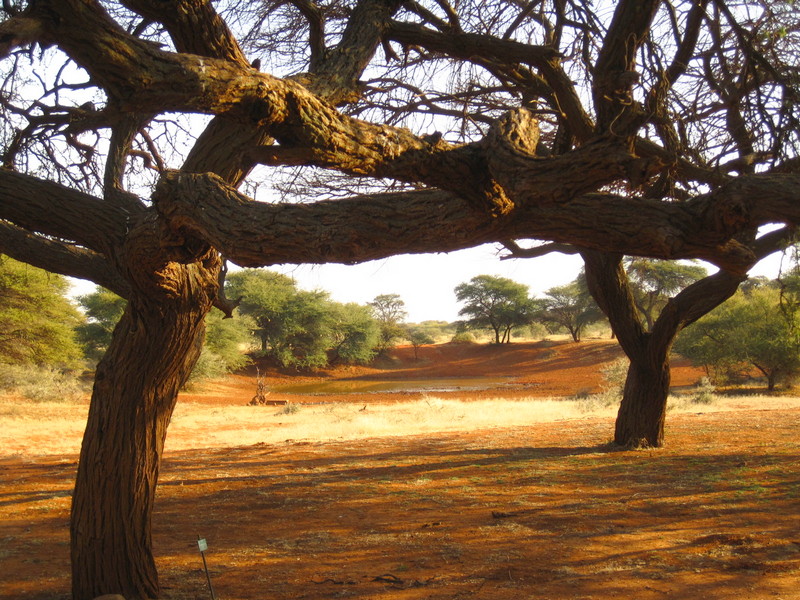 This is the view from our bedroom of the waterhole.

We were in heaven. We’ve just found our next favourite spot. 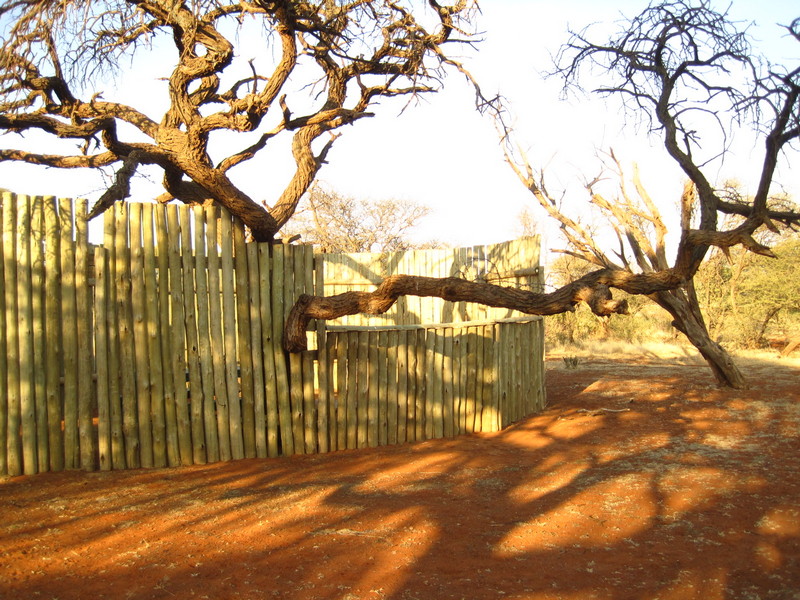 The boma accommodates the trunk of a Camel-thorn tree.

The next best thing is that if you’ve booked the house, no-one is permitted to make use of the camp sites. So exclusivity, and utter peace, reigned. The nights were filled with the yowls of jackals, the short, shunting-train grunts of lion (again from a neighbouring game farm as Mokala has no predators) and, once, the hoots of an owl. 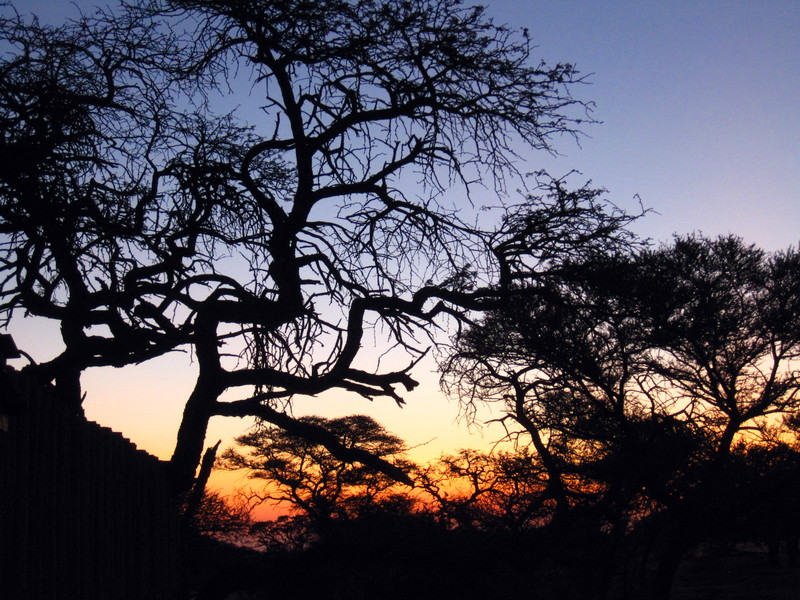 Haak-en-Steek is named after the Umbrella Thorn, whose lovely flat canopies fill the sky throughout the park.

Our game drive the next day began in crisp 10°C temperatures, and for most of the morning, we were the only vehicles on the road. It also started off with a bang. (Well, a gentle one.) First, a lovely big group of giraffe fielding a host of spindly light-skinned young ones, a trio of tsessebe sitting in the grasses, just their horns sticking up above the yellow, three kudu females with large ears trained forward, tensely alert, and then … the red-dust rumps of three white rhino ambling peacefully some way off among the trees. 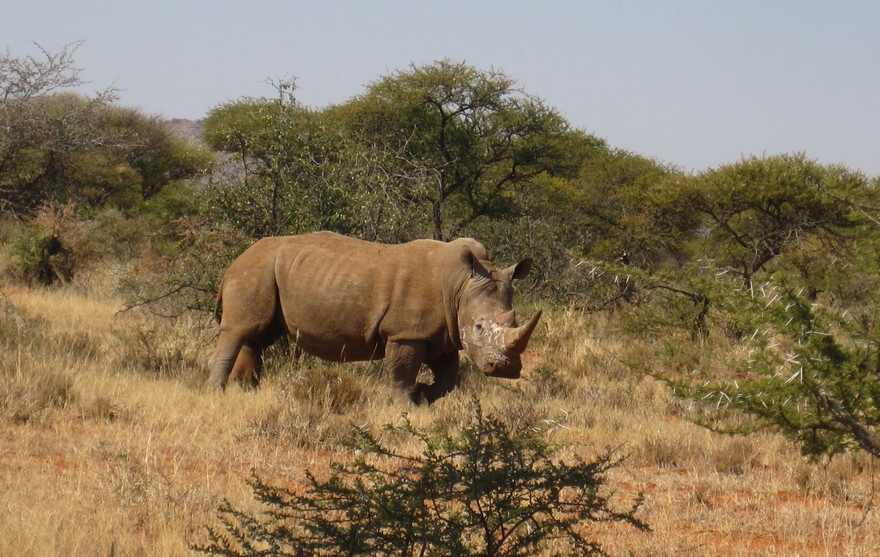 We were privileged to see a solitary rhino on our way back home. Pic’s mine! 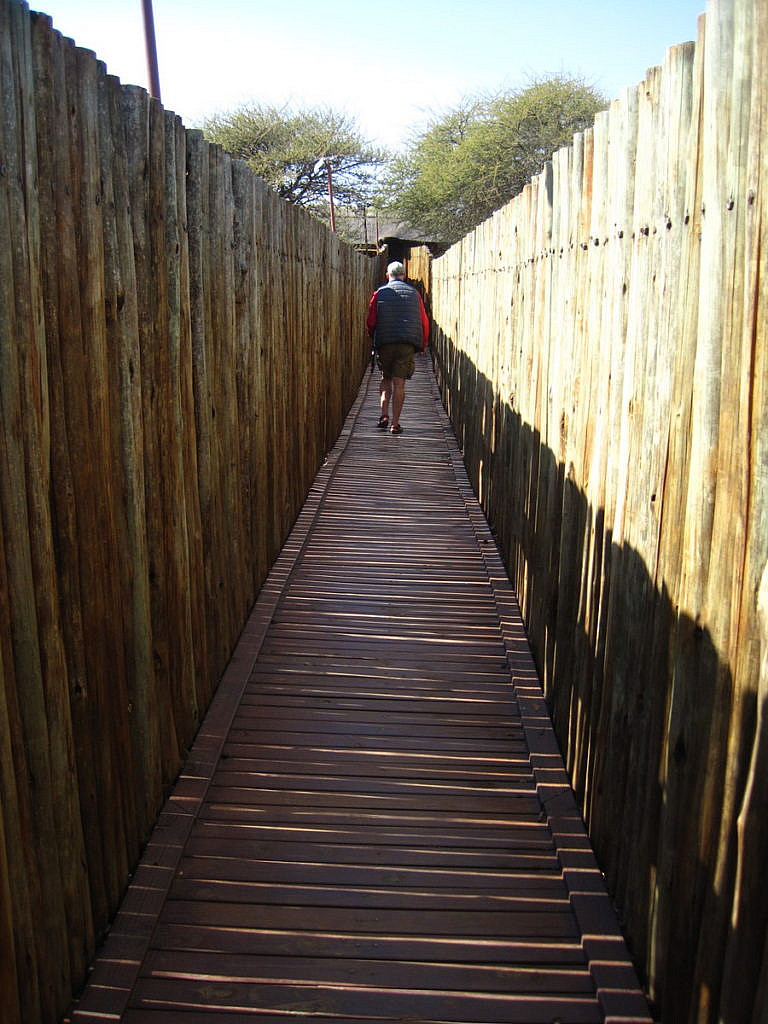 Path to a bird hide.

Now all we wanted to see were sable and roan antelope! Although Mokala is named after the camel-thorn acacia, its slogan is “Where endangered species roam” and these two are their flagship species, besides rhino, of course.

But, once again, my feelings on sightings boards was reinforced. We drove the Tsessebe Loop, on which both sable and roan had been seen the previous day. Niks, nada, niente. Not even a tsessebe! So then we took two very short 4×4 trails, labelled as such for their thick red sand, so nothing too taxing at all. On the Mellifera Trail, named after the black-thorn acacia, a herd of seated buffalo stared balefully at us. On the Merakeng Loop, we met up with an unusually large herd of gemsbok with their gorgeous face-paint, and in the distance, blue wildebeest with their beards, humps and hook-horns. “Sable!”, I cried, “I want to see sable!”

And after much searching, there … in the wide open golden grasslands, right near the road … stood my revered sable antelope. (I was born in Zimbabwe, what can I say?) He was a beautiful glossy specimen, with great barrel-arch horns. He stood and surveyed us coolly while munching on sweet grass. Then he scratched himself, sweeping horns scything the air, and the head went down, immersed by the grasses, horns arching out. That sealed the day for us, and it was time to wind our way back for a late lunch. Again. 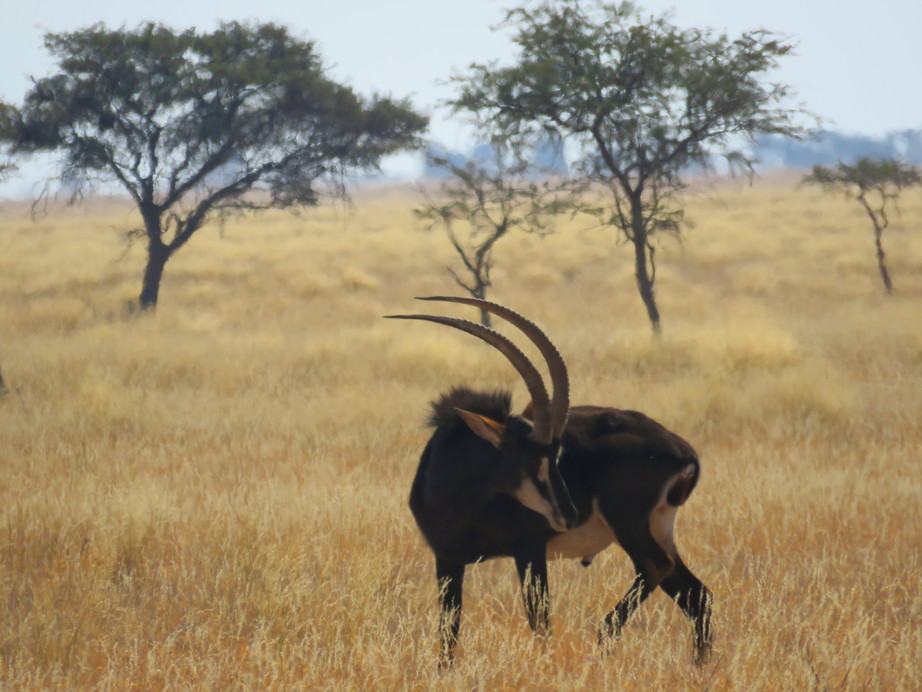 You beauty! (Photo by Hirsh)

But when you have the setting we had at Haak-en-Steek, why would you want to be anywhere else? Late afternoon, the animals start wandering in — from all angles. We had red hartebeest, tsessebe and springbok wandering past the house, a gemsbok grazing nearby, clumps of kudu and wildebeest emerging from the woodland in front of us, and an over-tame grey duiker which came to sniff at our bedroom door while we were standing there. There are people who feed him, methinks … Skande! 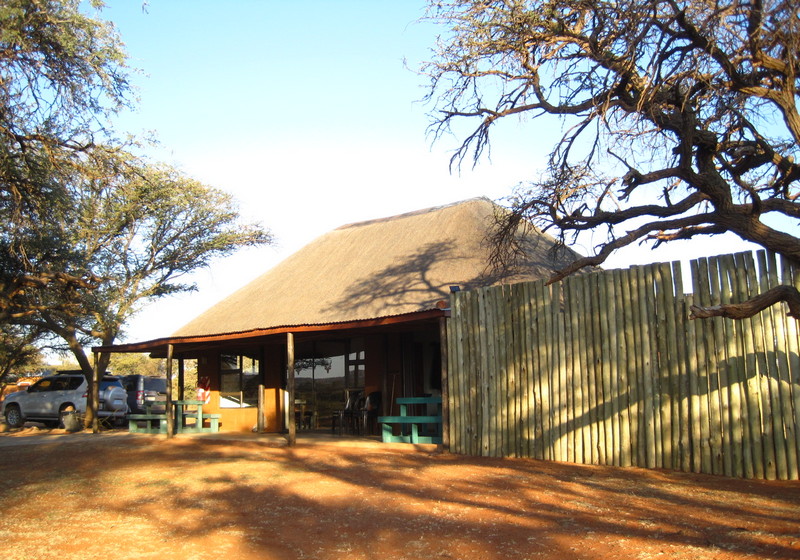 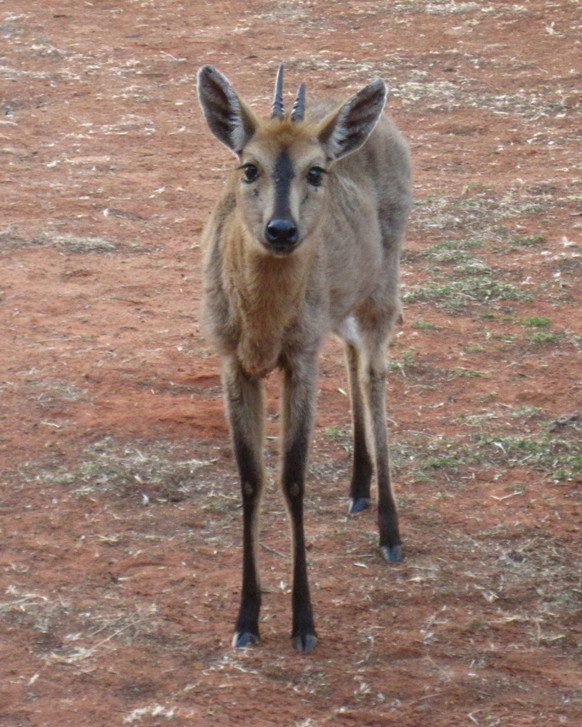 Our last night in the wilds!

While our personal chef Hirsh worked up magic in the kitchen, travelling minstrel Keith entertained us with his acoustic guitar and some seriously good picking and plucking at the strings and singing. In the morning, in beautiful early morning light, we sat drinking our coffee and rusks while a wildebeest rolled ecstatically in the mud and a tsessebe dug his horns in the slush, dunking his head from side to side — to get rid of parasites, we surmise. We’ve seen interesting animal behaviour on this trip: zebra digging in the dry riverbed (on the surface, that is) for water, and finding it; elephant using their great foot-pads and trunks in the sand to find water sweeter than the usual muddy offerings. Also, a lot of territorial posturing at the water sources … a wildebeest butting off a red hartebeest, elephants shaking their ears and trunks at trespassing antelopes. 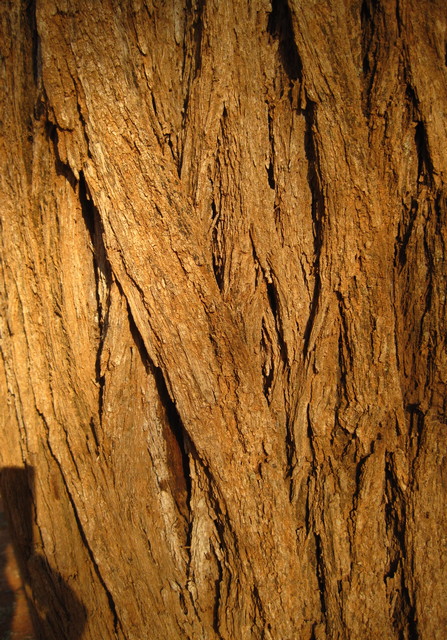 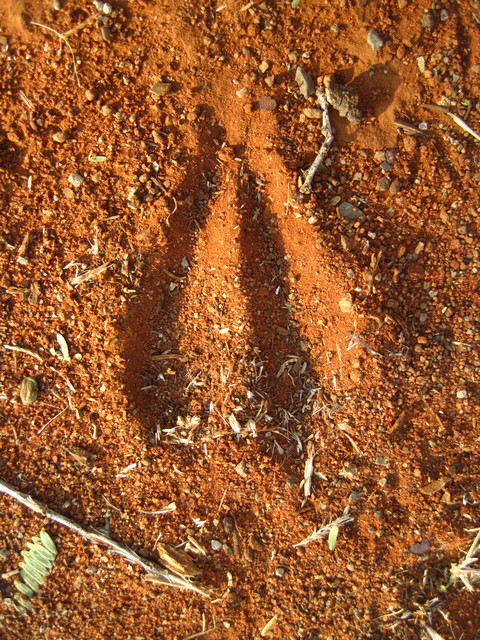 Just love the rough, ropy bark of the Camel-thorn. The spoor of grey duiker outside the house.

Just before we exited the park, a large herd of kudu, the males with a decided air of hauteur, stood stock still, watching us carefully, before bounding off with remarkable agility up a bouldered hill. It was a suitable send-off to a truly, truly wonderful three weeks in the bushveld. 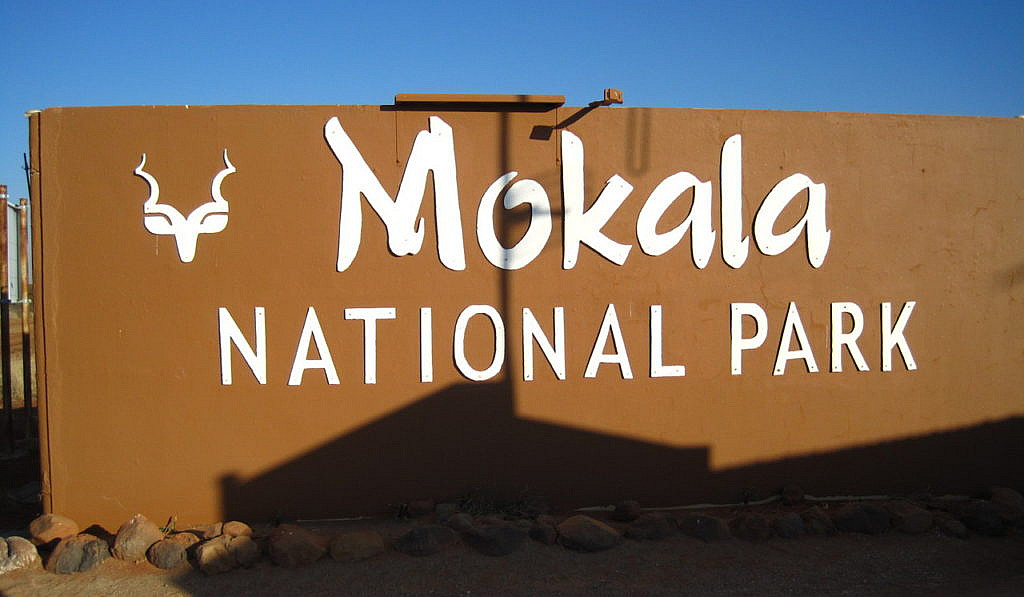 Time for home! A brief overnight stop at Karoo National Park with its gorgeous mountain setting just outside Beaufort West, and the culmination of a 5,550 kilometre round trip on dust and gravel and grit!