When you’re in the wilds, often what’s more special than major tick-off sightings is simply to sit quietly and observe animal behaviour, their interactions with each other … and you … as the case may be. You are now in their territory, where it’s the wild animals that direct operations and call the shots. 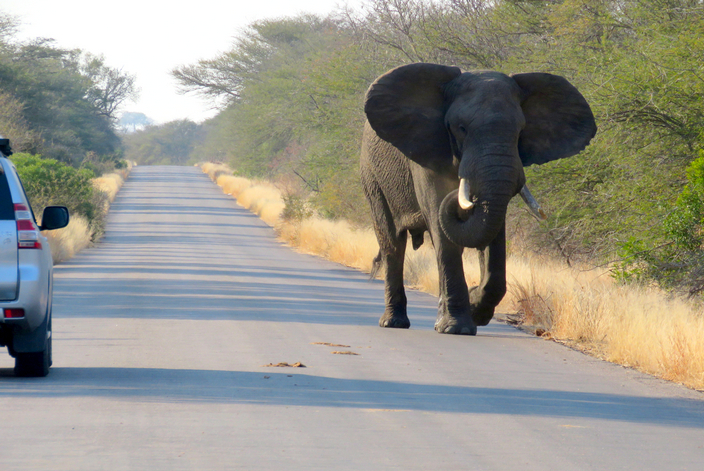 Clearly not comfortable with Keith’s presence in his territory, as the fully extended ears indicate, this is seconds before the bull elephant veers towards Keith’s vehicle to test out how serious a threat he poses. Although Keith claims to have been very calm throughout this time-stands-still moment, we had stopped breathing, our engine switched off a little distance behind him. At the last second, the bull switched course and passed in front of Keith to melt into the bush. Note: all photos by Hirsh (except elephant below). 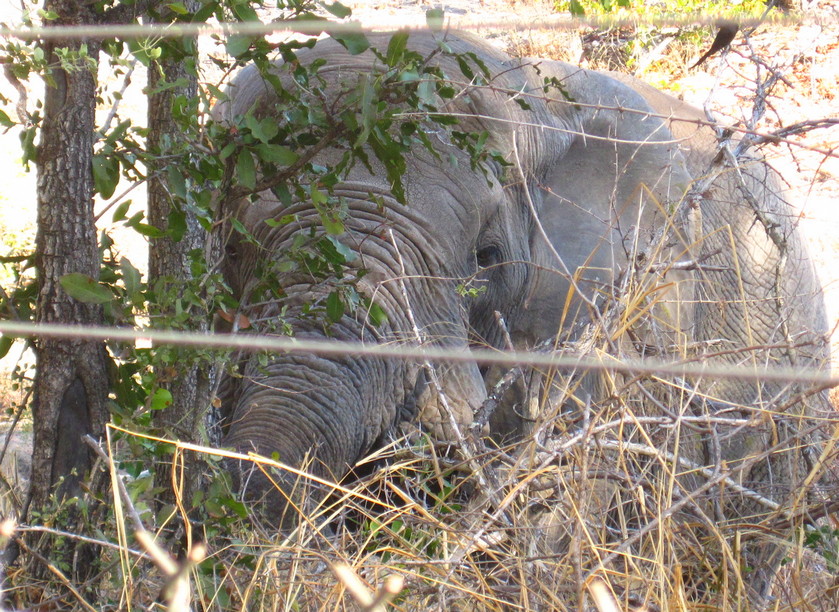 Trying very hard to conceal himself, he nevertheless knew that I was not even half a metre away, standing stock still and not daring to breathe, on the other side of the electric fence at Bateleur Bush Camp. I could have stretched out and touched him. But of course that would have been madness. We simply respected each other’s space and I backed away very, very slowly and quietly. Even so, he gave an irritated harrumph! and a shake of his head. 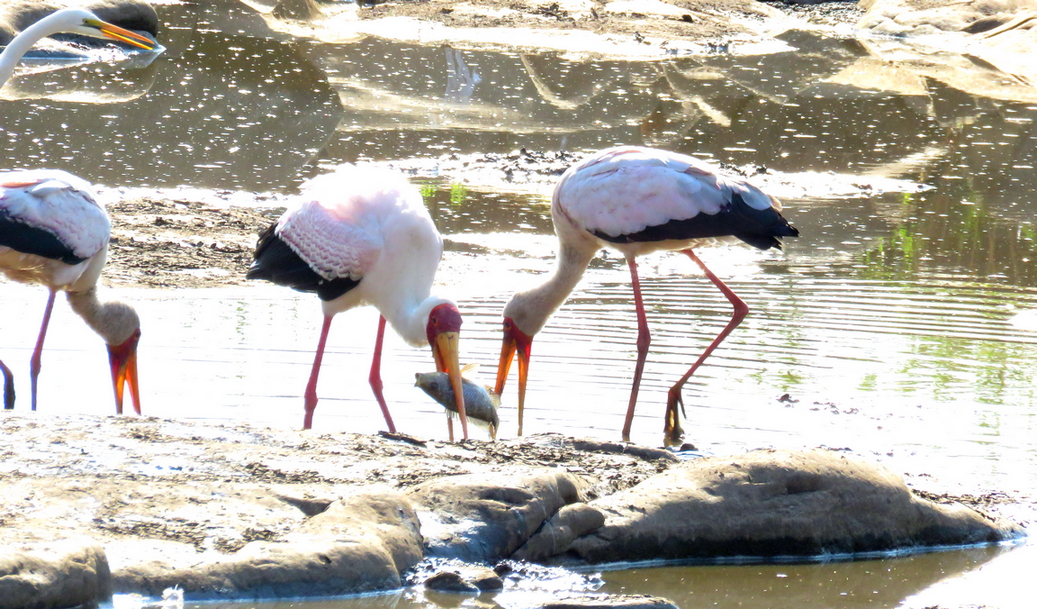 It being the rainless dry season in Kruger, many rivers have dried up leaving only discrete pools of water, which makes it easy for birds like these Yellow-billed Storks to snag hapless fish that have been left trapped in the water. Ironically, though, this fish was too large for the stork to swallow whole and it was eventually abandoned! Notice the Great White Egret (top left corner) waiting in the wings to stab at the fish once it had been let go. 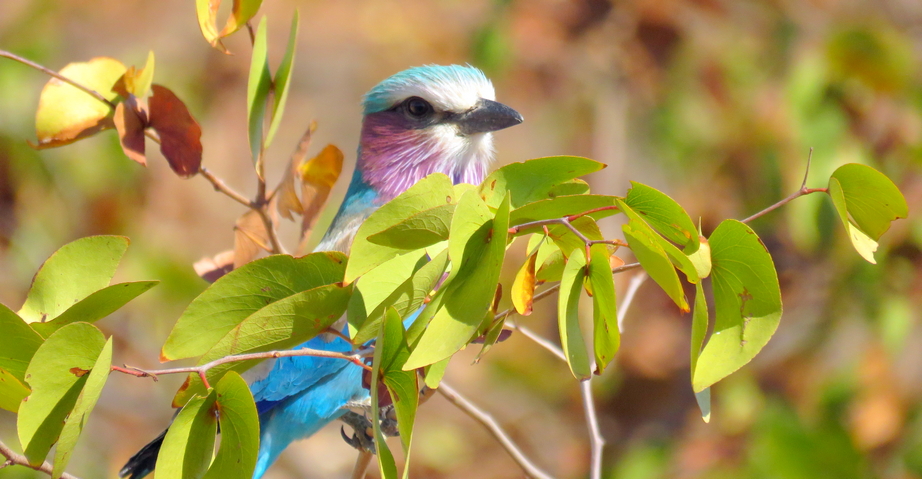 Even though we have unobscured photos of Lilac-breasted Rollers in their full metallic resplendence, I really liked this almost secretive perspective through the butterfly-leaved mopane. It still doesn’t hide the gorgeous colours of a truly beautiful bushveld bird. 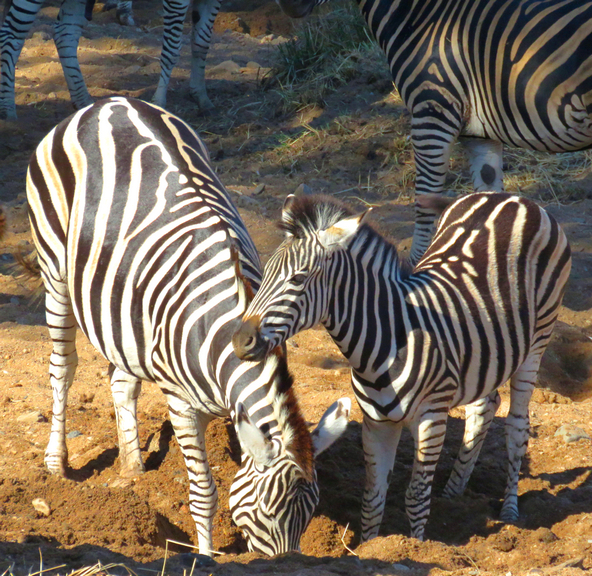 Talking about dry river beds, these Burchell’s zebras patiently dug into the sand and eventually struck fresh underground water to lap at. Amazing that they instinctively know just what to do. 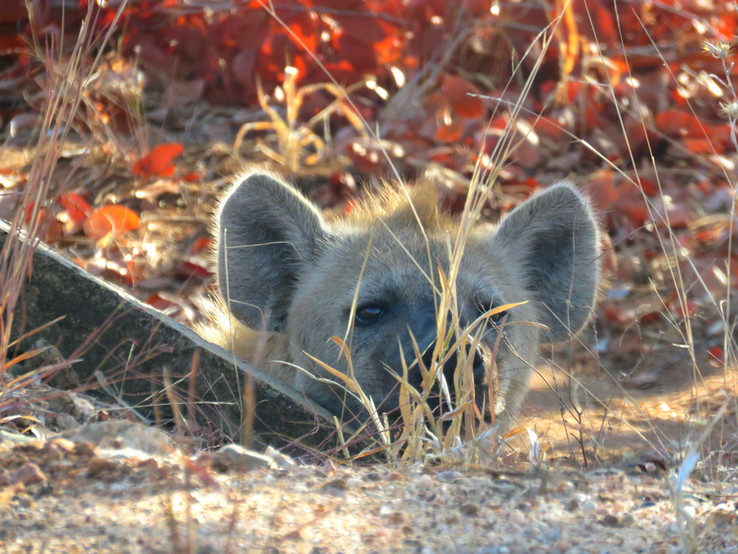 Did this young Spotted Hyena really think we couldn’t see him? We were absolutely amazed at how many different occasions we had the privilege of seeing these animals on this particular Kruger trip. 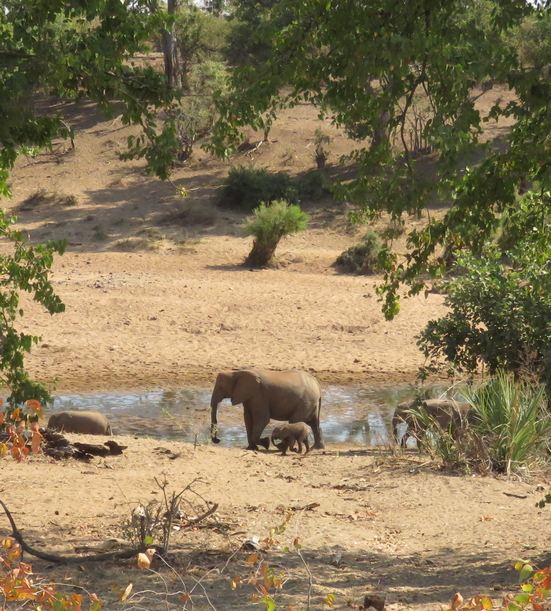 Mother and cutesy baby, so teeny-tiny it can slip under it’s mommie’s stomach, are quite unaware we have a furtive glimpse of them through a gap in the riverine vegetation.