It struck me one day that if, while wandering through Knysna, you look upwards at the gables and lintels and parapets, there is still so much history, so many stories, bound up in the curves and columns and straight lines. I was so intrigued that early one morning, armed with my camera, I set off to dig a little deeper. 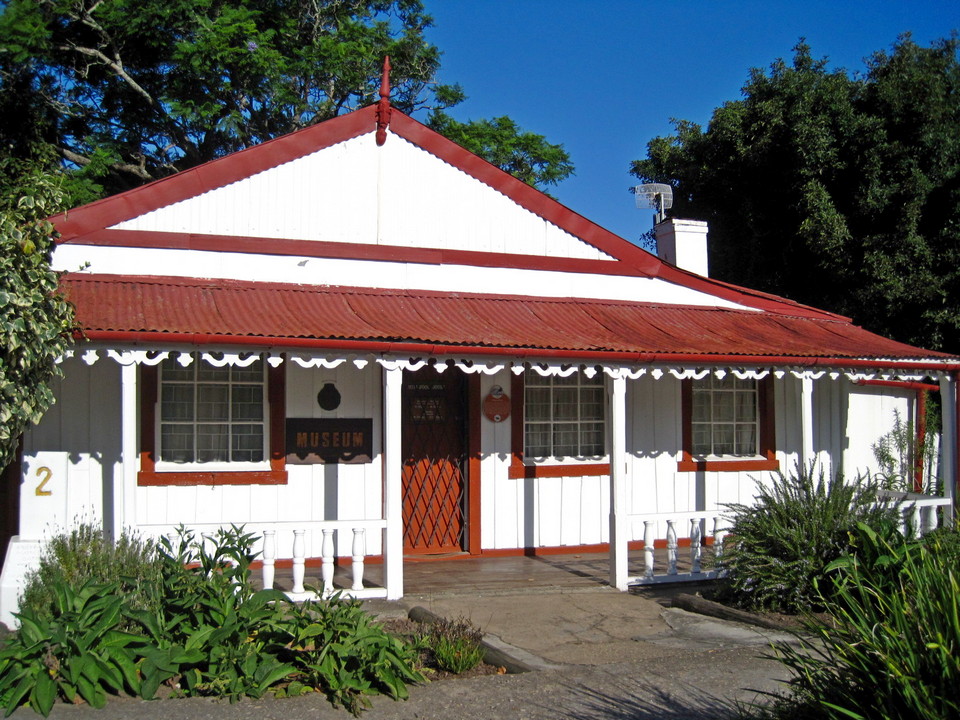 Millwood House, built in the 1880s, once stood in the Knysna forest, part of the Millwood gold-mining village. Constructed of yellowwood, it was later dismantled and moved to Knysna when the mines’ brief life came to an end. Millwood is one of five buildings that make up the Knysna Museum.

Knysna’s recorded history, based mainly on timber and shipping, started with George Rex, a public notary from London who first worked at the Cape of Good Hope before moving to Knysna in 1804 where he bought the farm Melkhoutkraal, whose land surrounded the Knysna Estuary.

People love to perpetuate the legend that George Rex was the illegitimate son of a non-royal, Hannah Lightfoot, and the man who’d later become George III of England. This apparently has been thoroughly disproved. 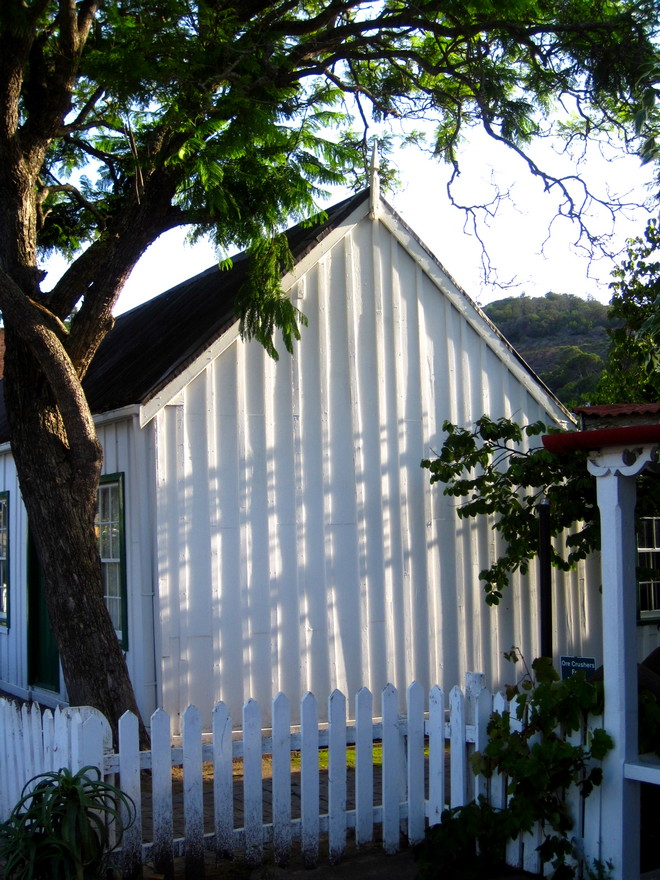 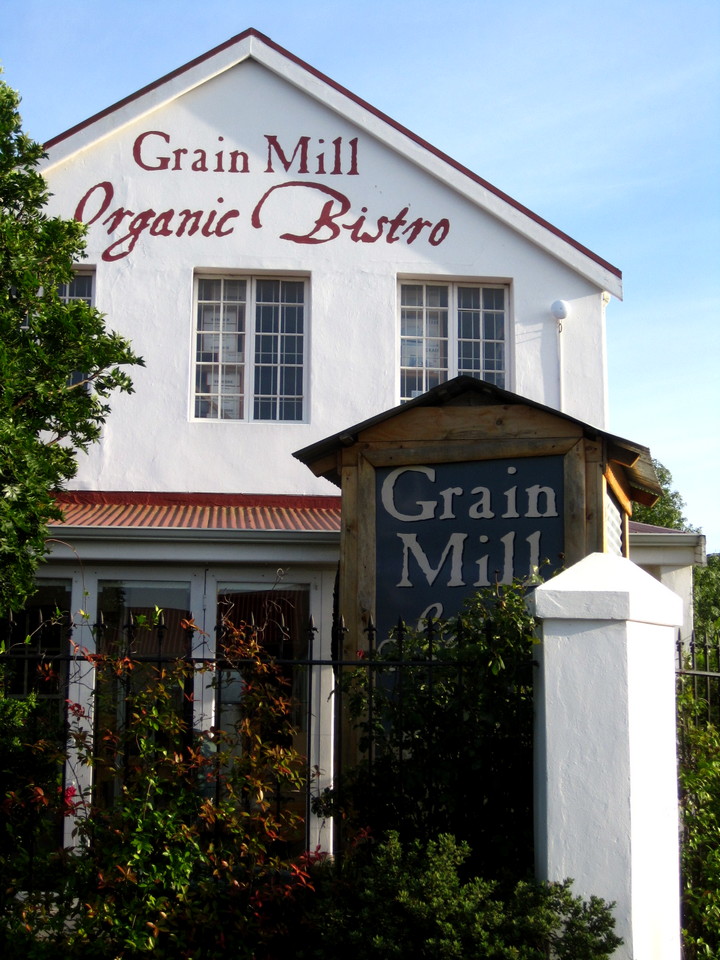 A great part of the architectural influences in Knsyna are 19th-century Victorian, although the earlier, simpler building styles (such as the Museum buildings) of Victorian architecture were inspired by the classical lines of ancient Greek and Roman architecture: pitched roofs, simple columns, symmetry. 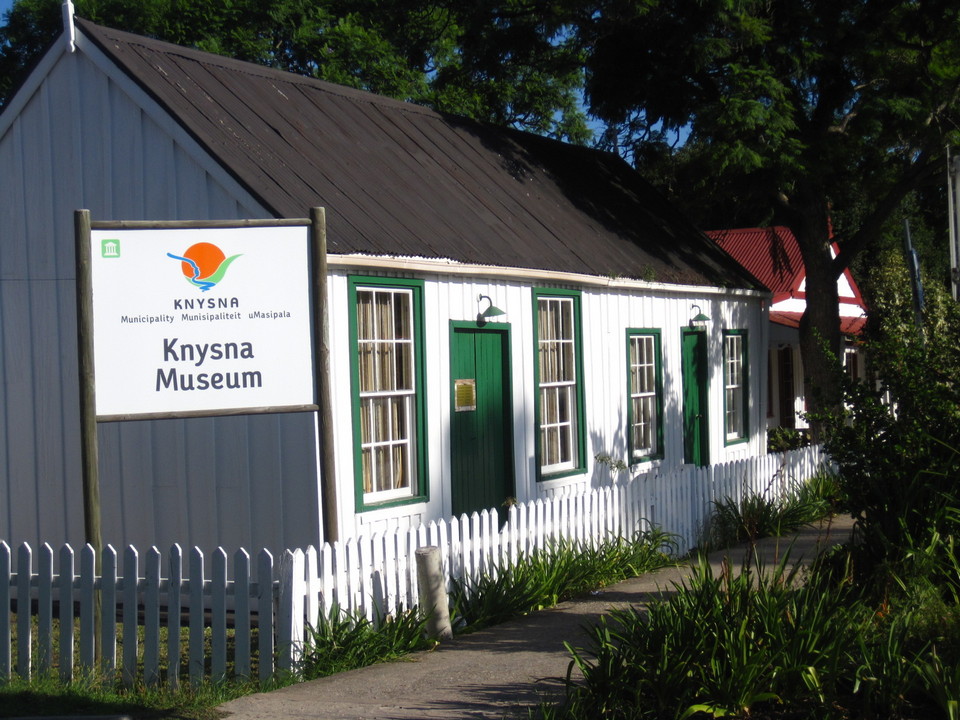 Dating to 1890 Parkes Cottage (after timber merchant George Parkes, I assume), is another building from the Millwood goldfields. It was dismantled and moved THREE times before being settled here, on Queen Street. 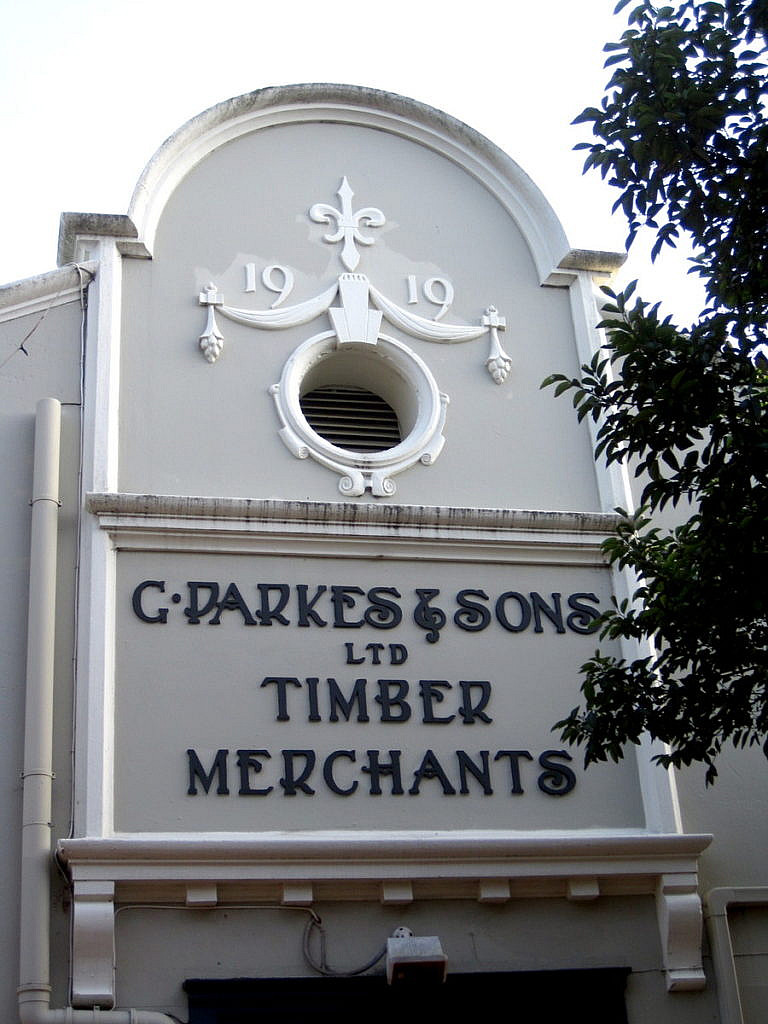 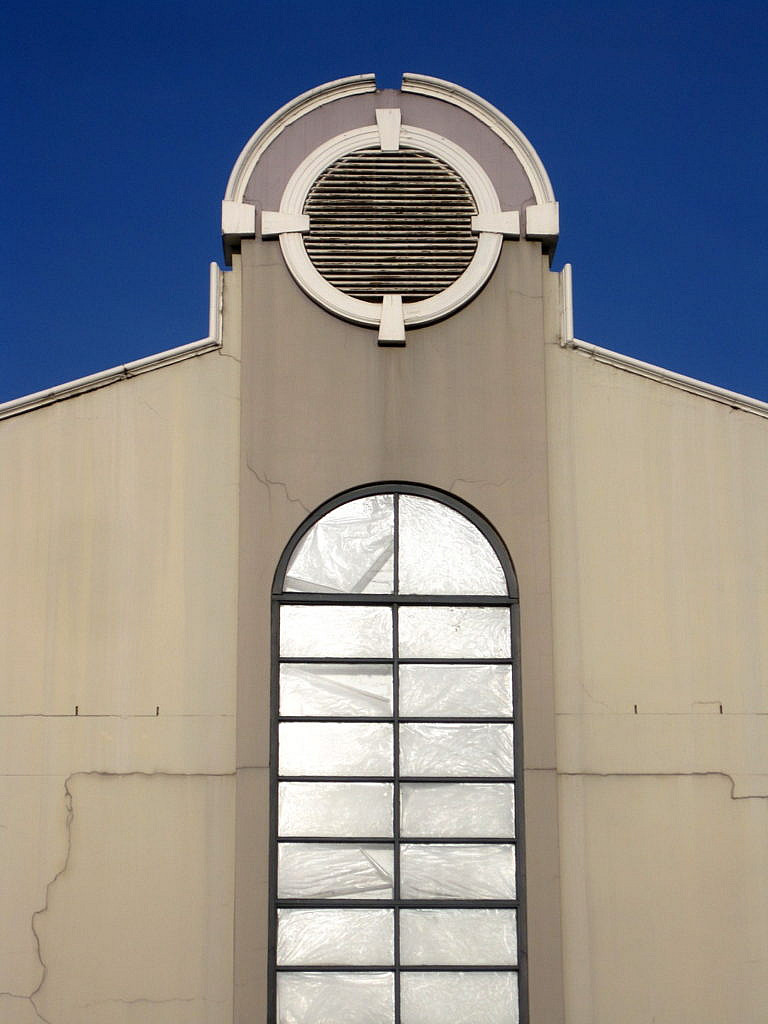 The building on the right (looking a little grubby today) has been incorporated into the Woodmill Lane Centre.

George Parkes was an industrialist from Birmingham, England, who moved to Knysna in the 1880s. He bought swathes of indigenous hardwood forest to supply wood for his factory, and it was he who established the first primitive sawmill within the Knysna forest. He later bought a sawmill in the centre of the town, which today has been repurposed into Woodmill Lane. 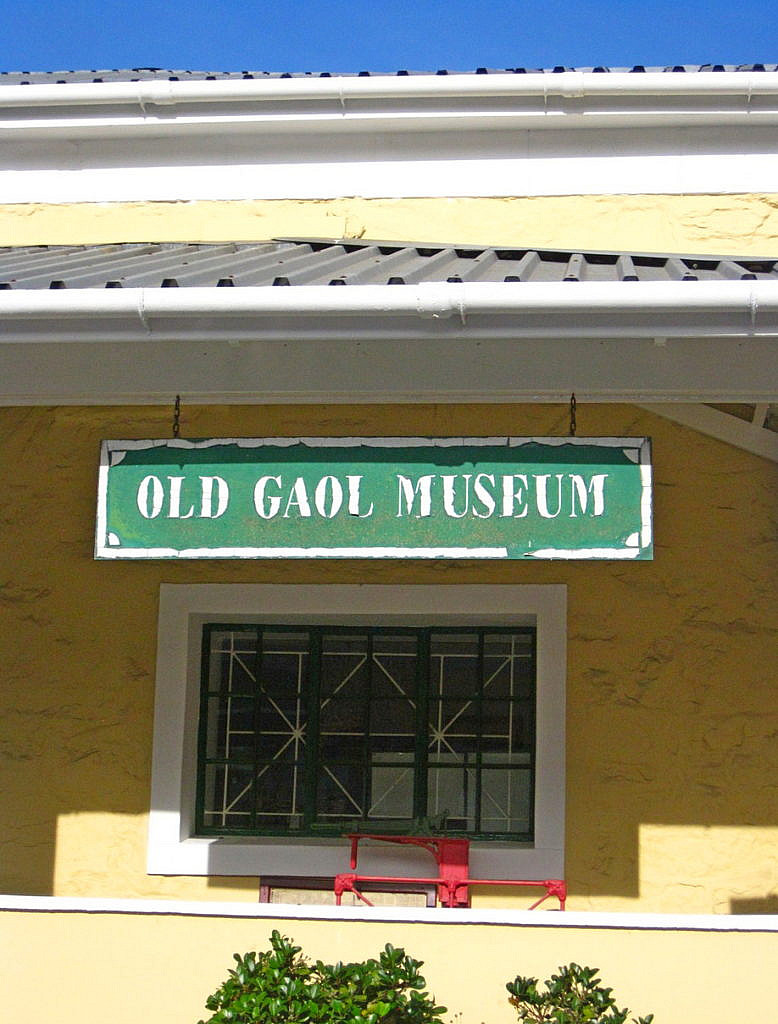 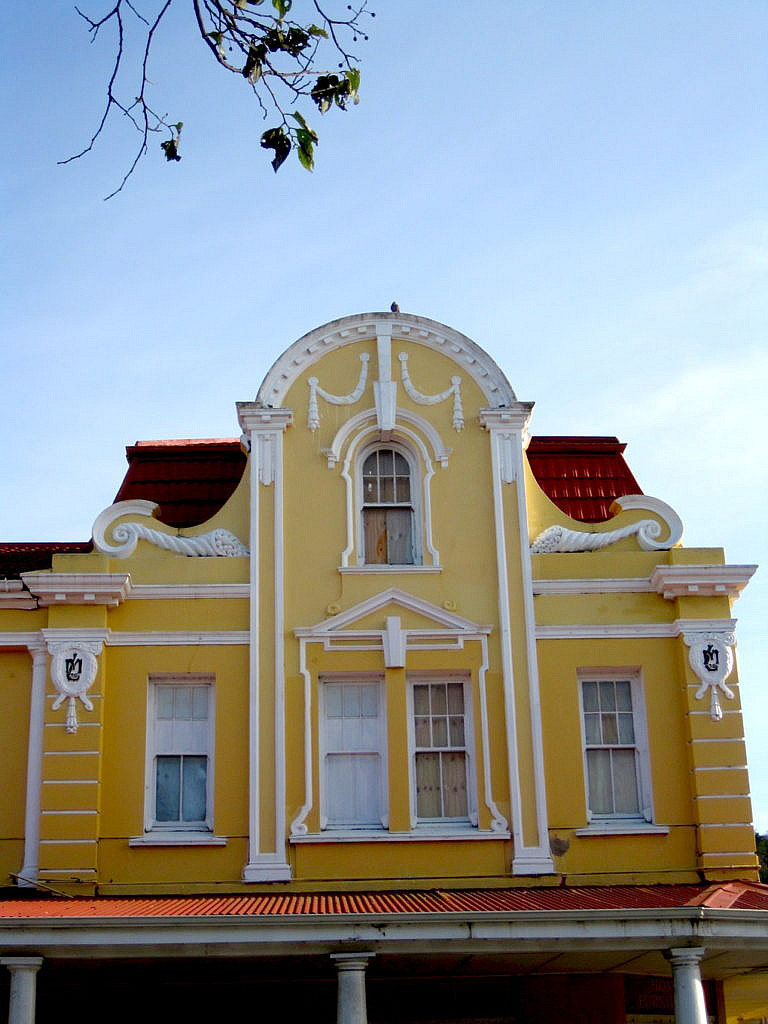 Contrasts: from straight lines to elaborate and curvilinear. Note the cornucopias to either side of the gable of Melville’s Building at right (note the ‘M’ crest on each corner), built in 1876 by a certain William Mile. In 1882, Standard Bank operated out of here, although there are various different businesses in it today. 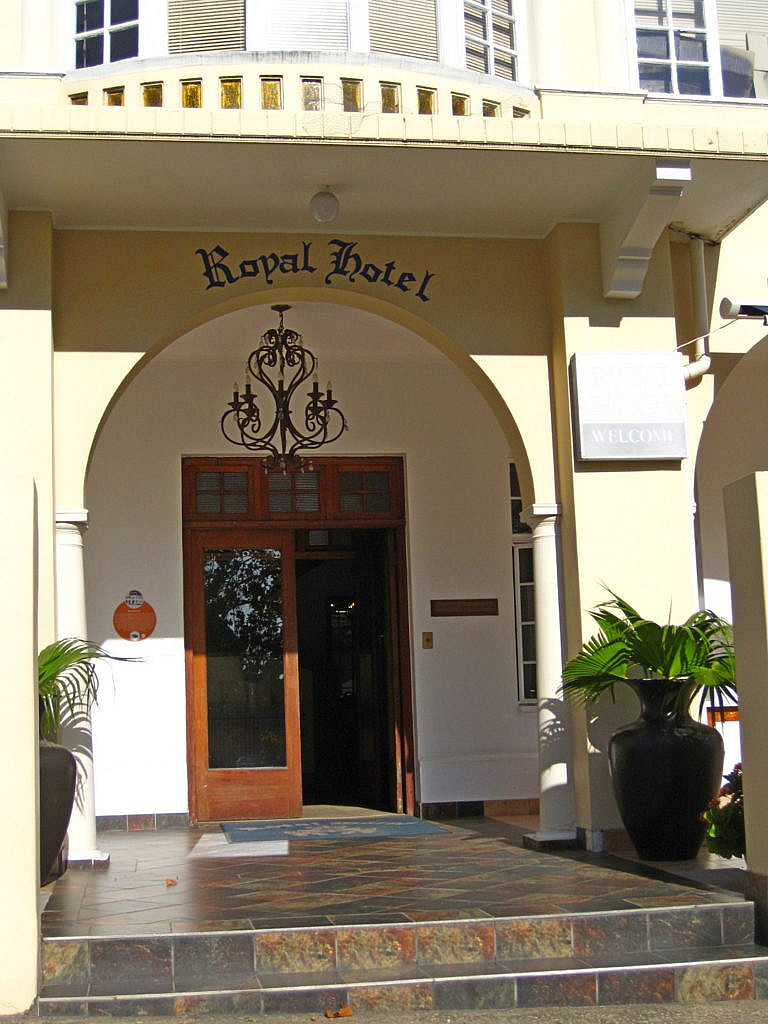 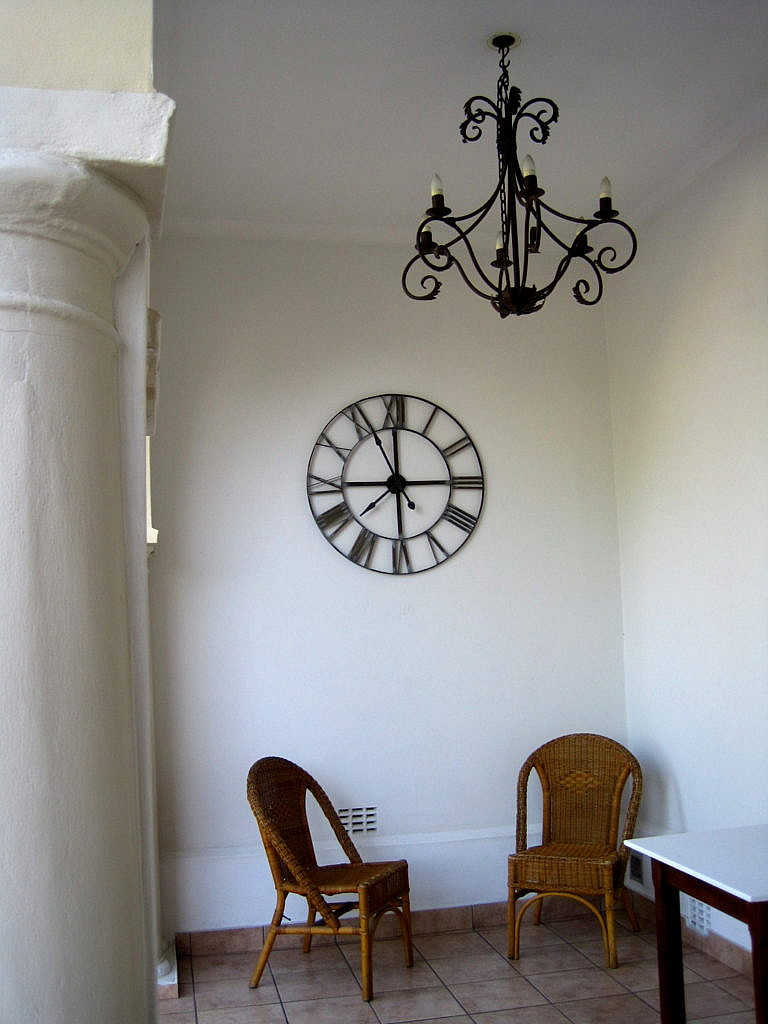 The Knysna Royal Hotel, whose façade of barrel arches and square small-paned bay windows is not highly exciting compared with the decorative gables, plaster wreaths and bas reliefs of others. The foundation stone was laid by Charles Wilhelm Thesen in October 1938.

The hotel began life as a corrugated-iron building, stayed in by Prince Alfred when he visited from England (thereafter it was named the Royal Hotel), and during which he went hunting elephants in the Knysna Forest. Nothing more to be said about that. 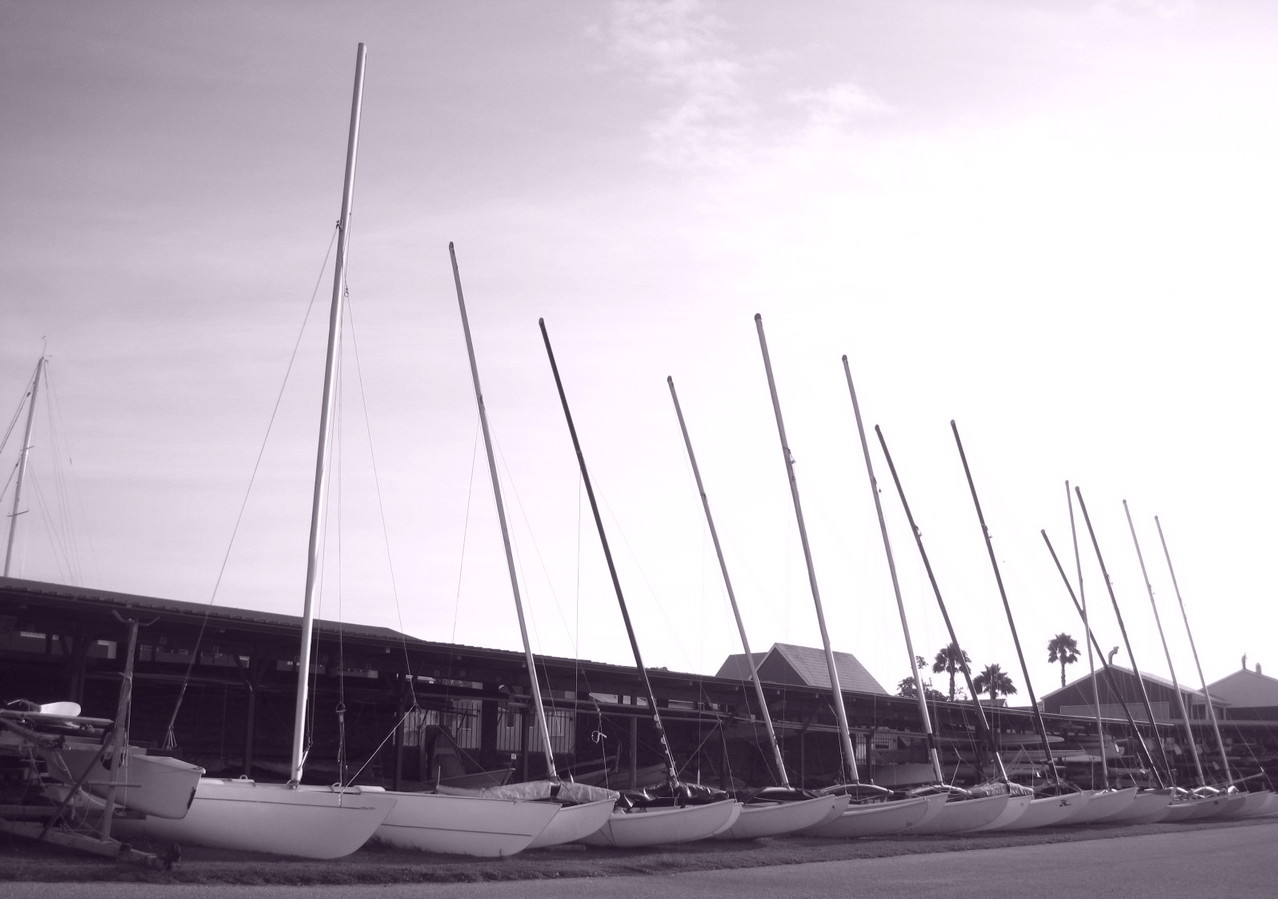 Talking about the Thesen family, Knysna’s boat-building industry was prompted after the Estuary became a port in 1817 for naval and commercial ships bringing in supplies, and later, to transport shipments of timber out of the area. The industry is still a reputable one today. 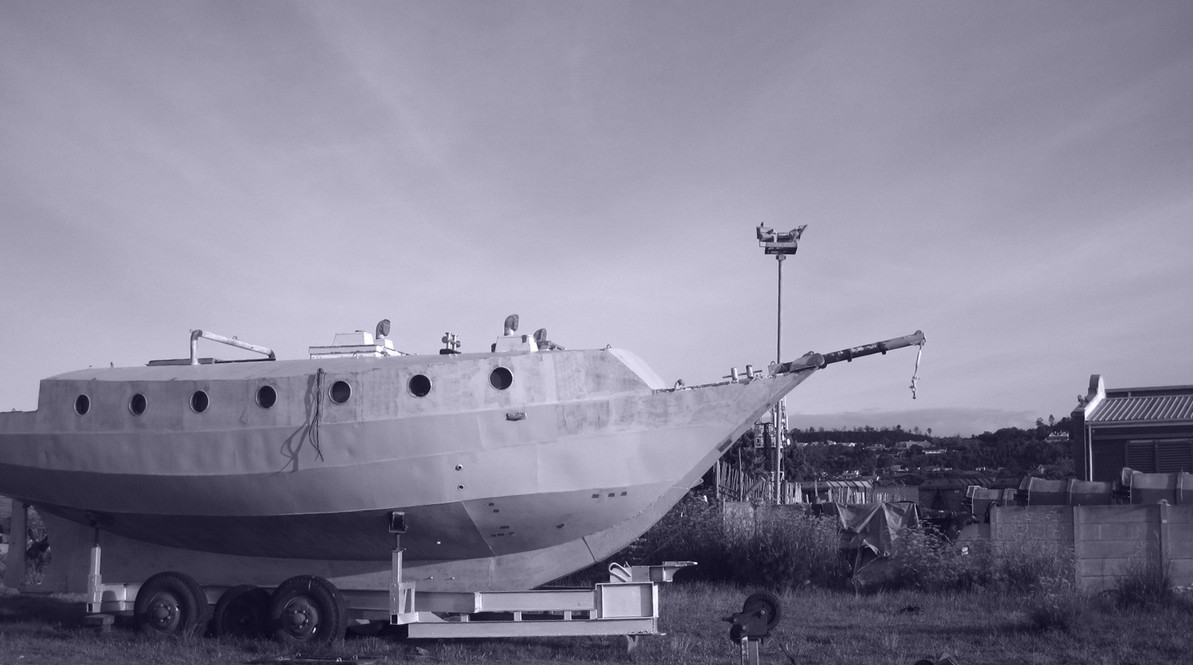 We even restore pirate ships for tourism! 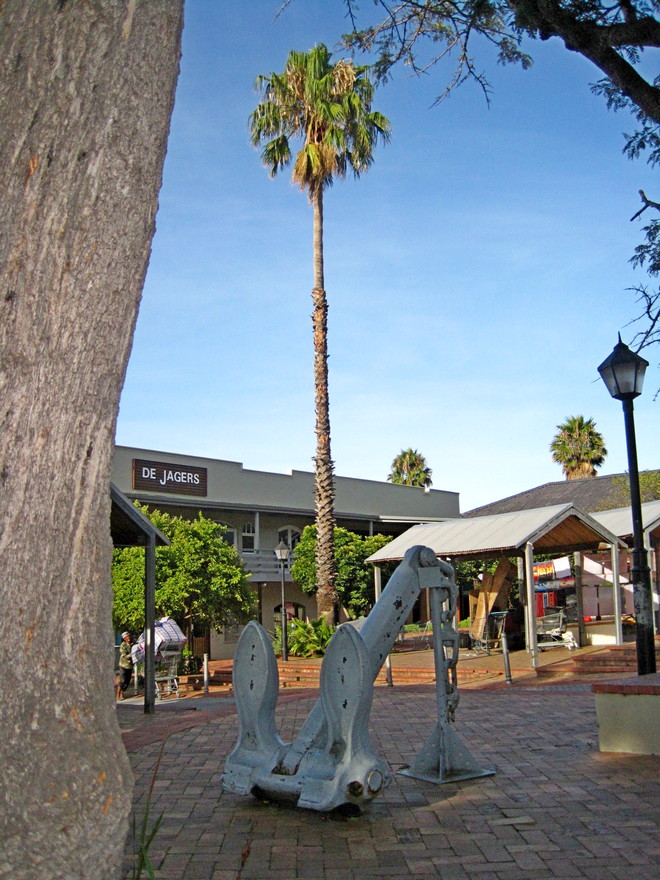 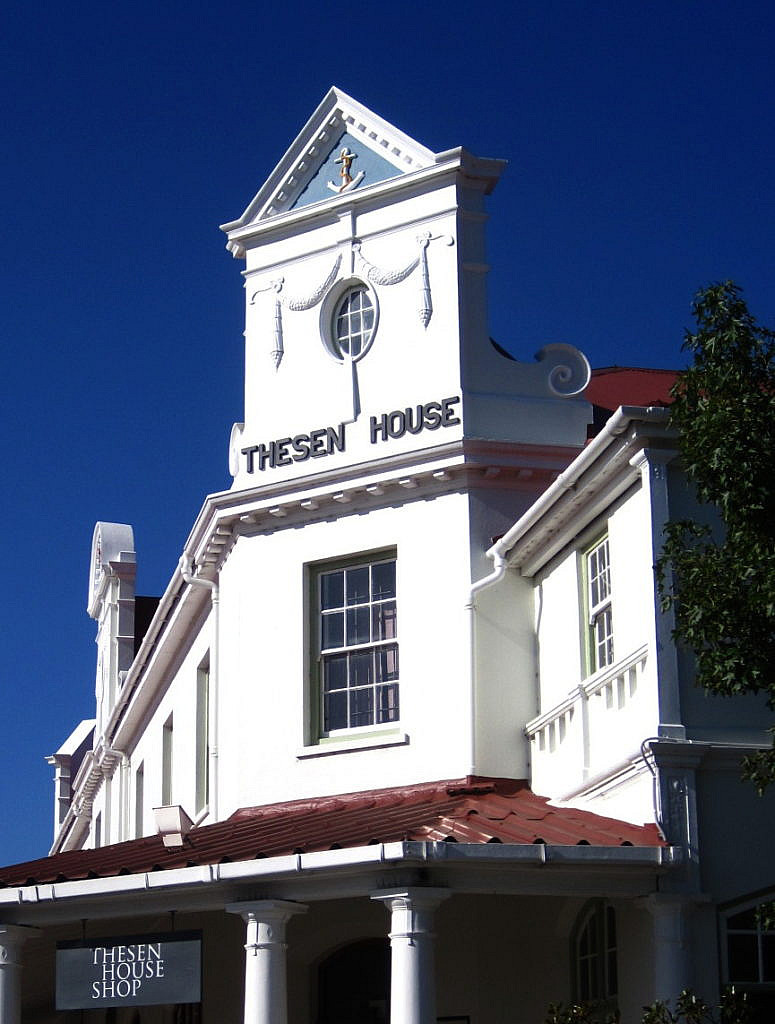 An anchor in the square, an anchor on a Thesen gable, signs of maritime activity everywhere. 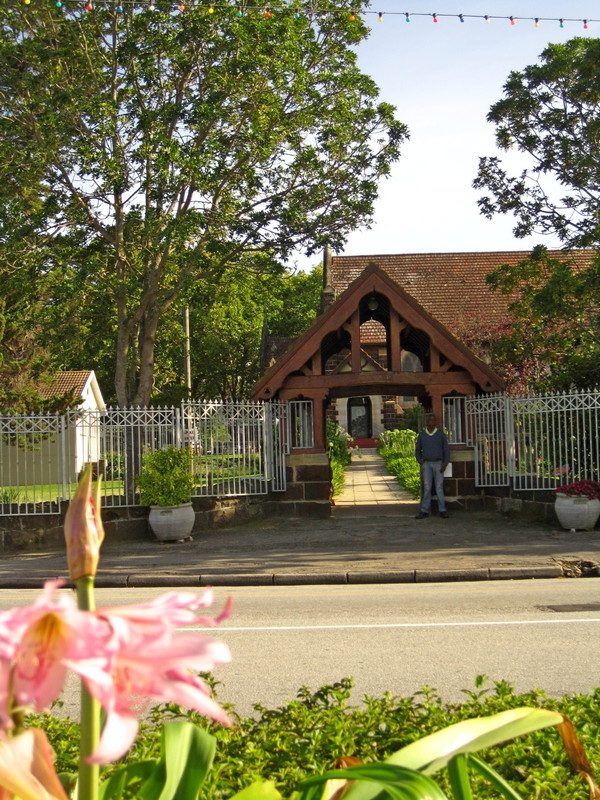 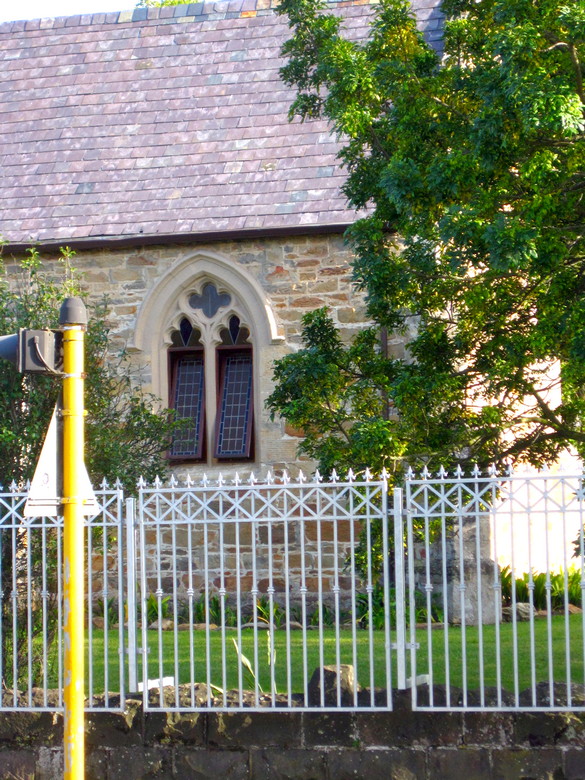 The lovely St George’s Anglican Church. Building started in 1850; it was designed in the ‘Kent’ architectural style — which is more Georgian than Victorian, an earlier period of classical architecture that aimed for symmetry and proportion. George Rex donated the land. Sophy Gray designed the buildings. 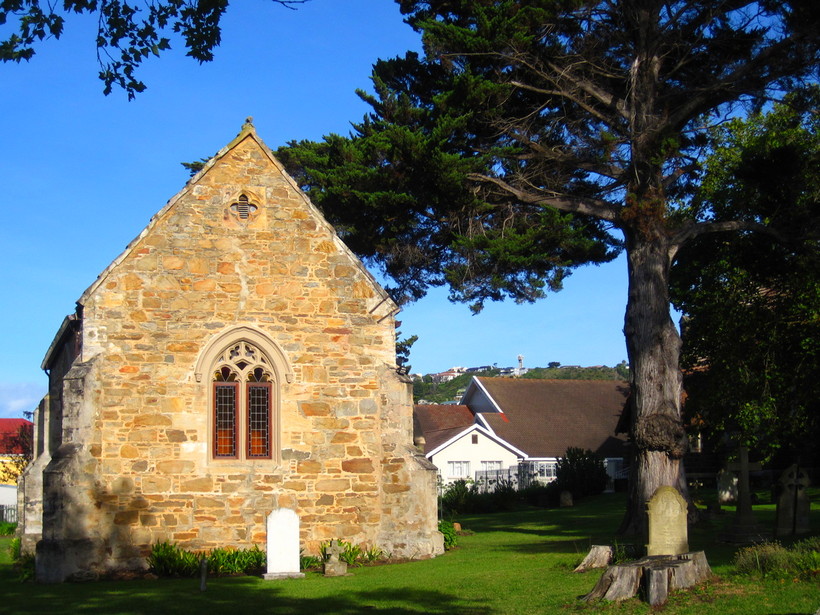 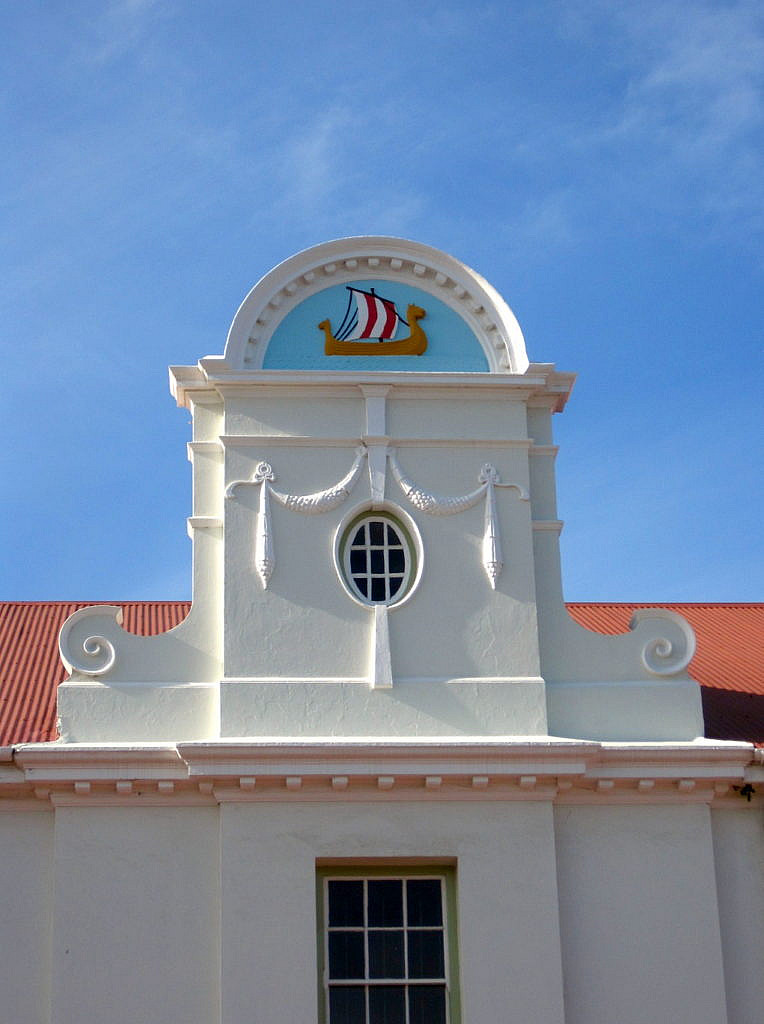 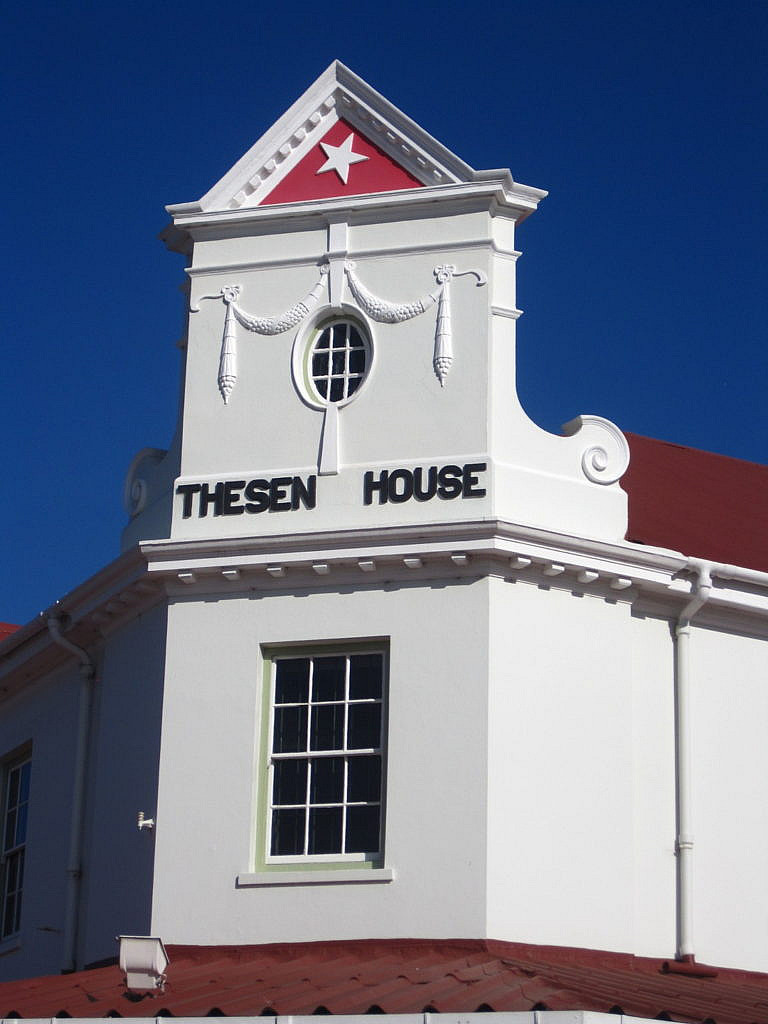 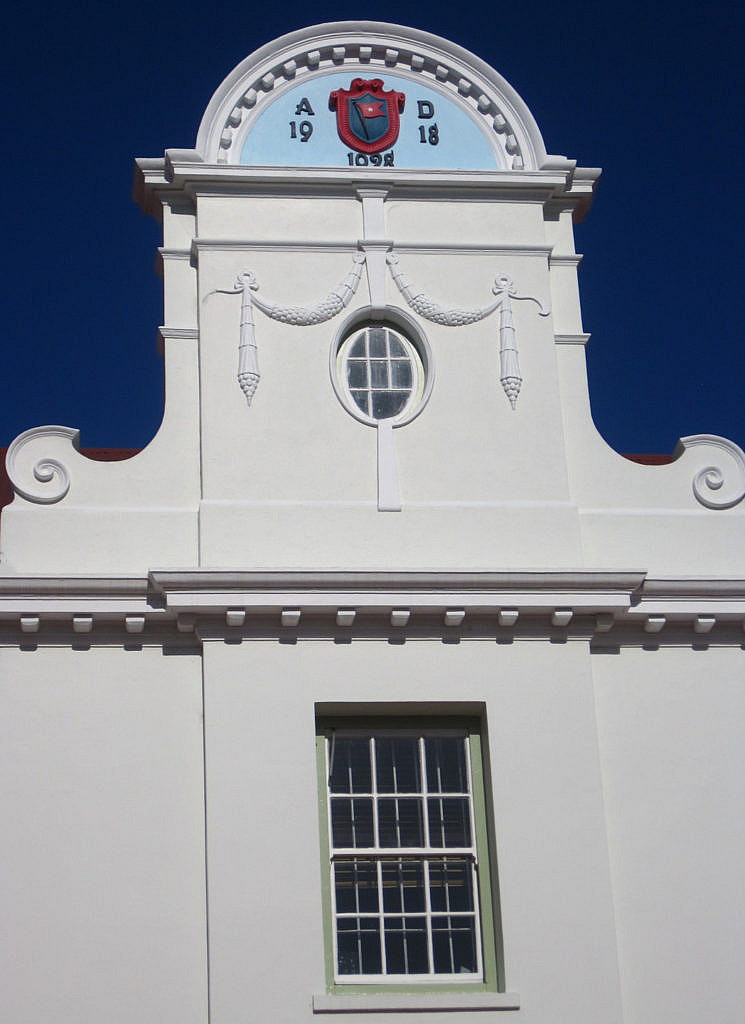 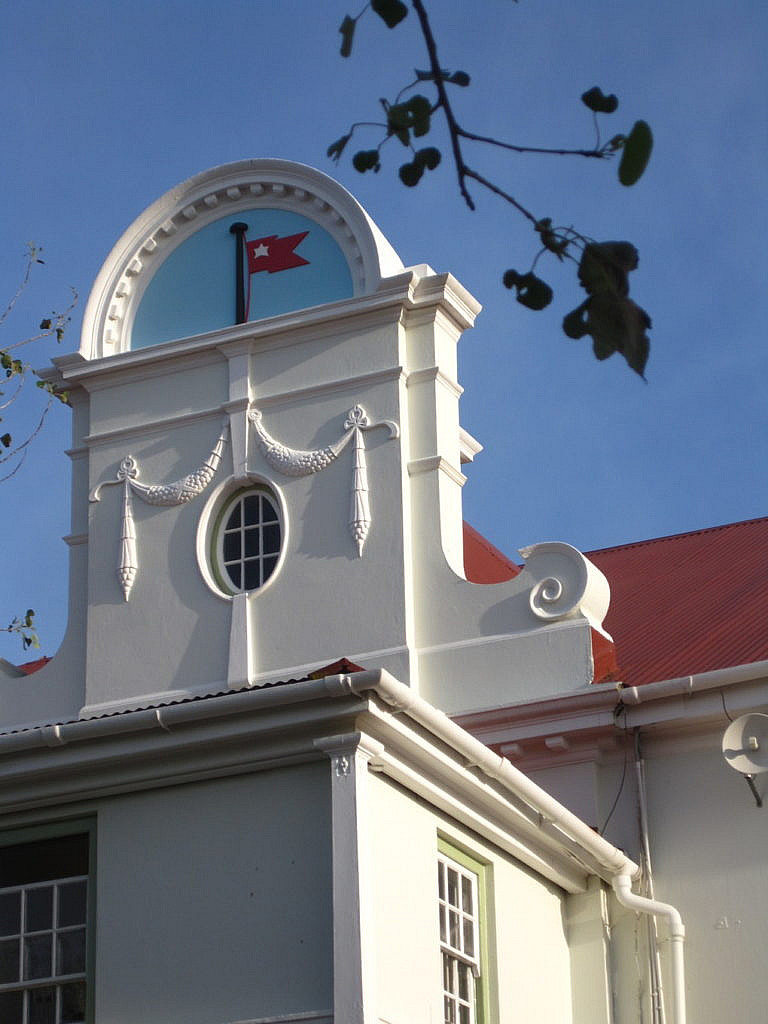 Knysna is firmly tied into the legacy left by the Norwegian Thesen family. Early in 1870 Arnt and Matheus Thesen and their families sailed to Knysna on their sailing ship, Albatros. They eventually established the Thesen Steamship Co. shipping line, together with a sawmill and boat-building factory on what is today Thesen Islands.

The original building of Thesen House was destroyed by fire in 1926, but it was rebuilt with these gables to reference Knysna’s Norwegian history: the symbols feature a Viking ship, an anchor, and the house crest and flag (white star on red) of the Thesen Steamship Co. 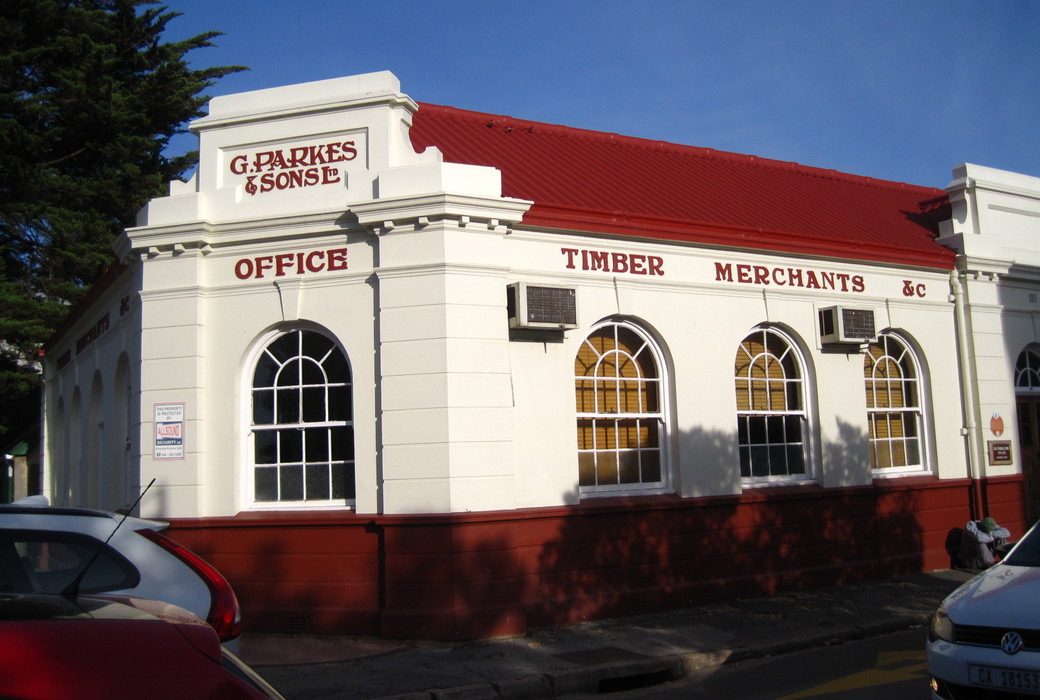 Although this building was built in 1924, it shows more Georgian architectural proportions than Victorian, with its squared-off lines and symmetrical rows of arched windows. But a lovely, elegant building, nonetheless, and a fitting end to this post.

If you liked this, I also have a Toronto-themed blog here