So … here is the promised sequel to our recent Namibian trip. Etosha, and Okaukuejo’s much-loved waterhole, always always deliver. It is such a thrill to spend time there. If you were a lazy traveller, all you’d need to do is book into Okaukuejo Camp for several days and hang out on a bench with your coffee flask and rusks. (Or a glass of wine at sunset.) 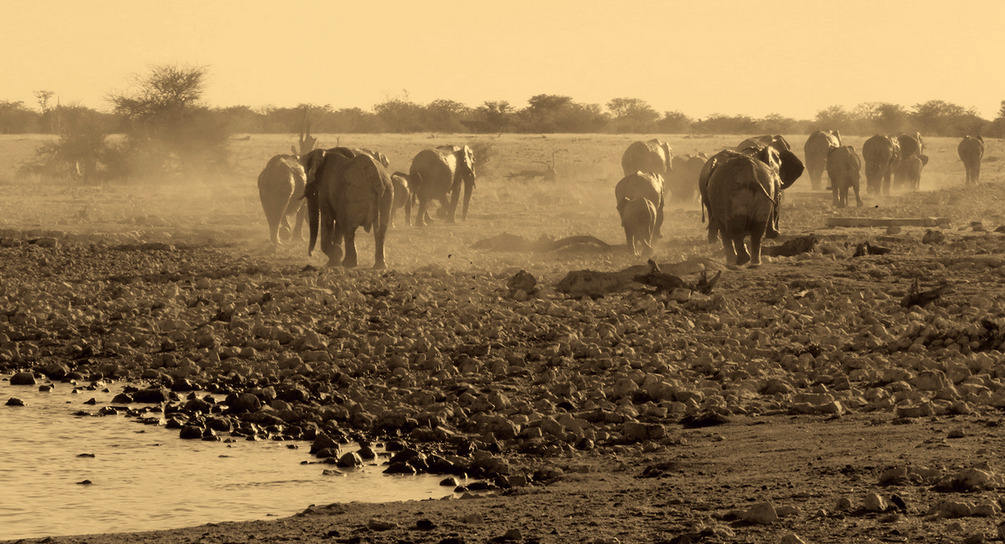 Great troops of elephant ghost in and out to Okaukuejo’s waterhole throughout the day, exiting silently but leaving a trail of dust in the dry air as evidence that they’ve visited. 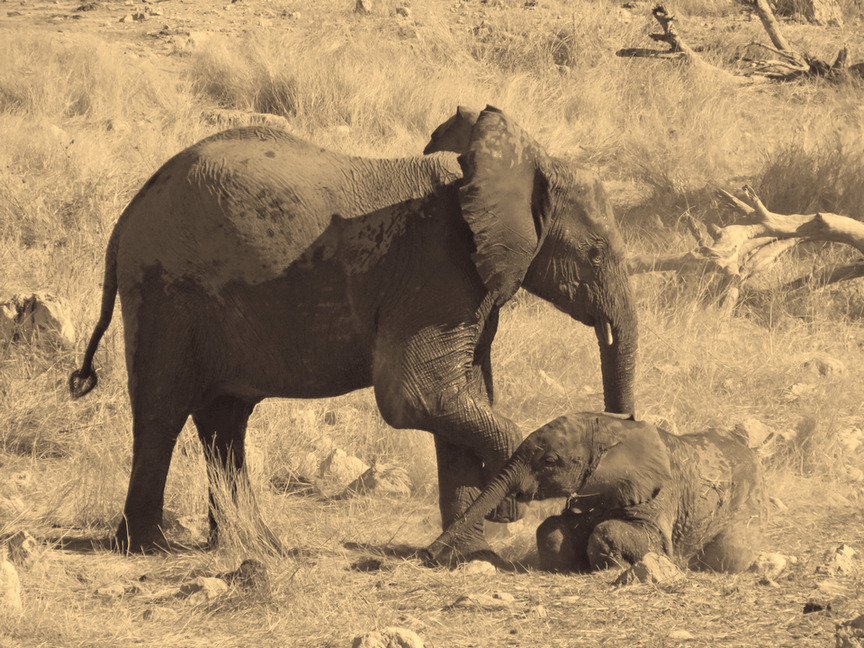 The dinkiest babies frolic and play with their older brothers (or sisters), while testing out tiny straw-trunks, sometimes not knowing what to do with them. 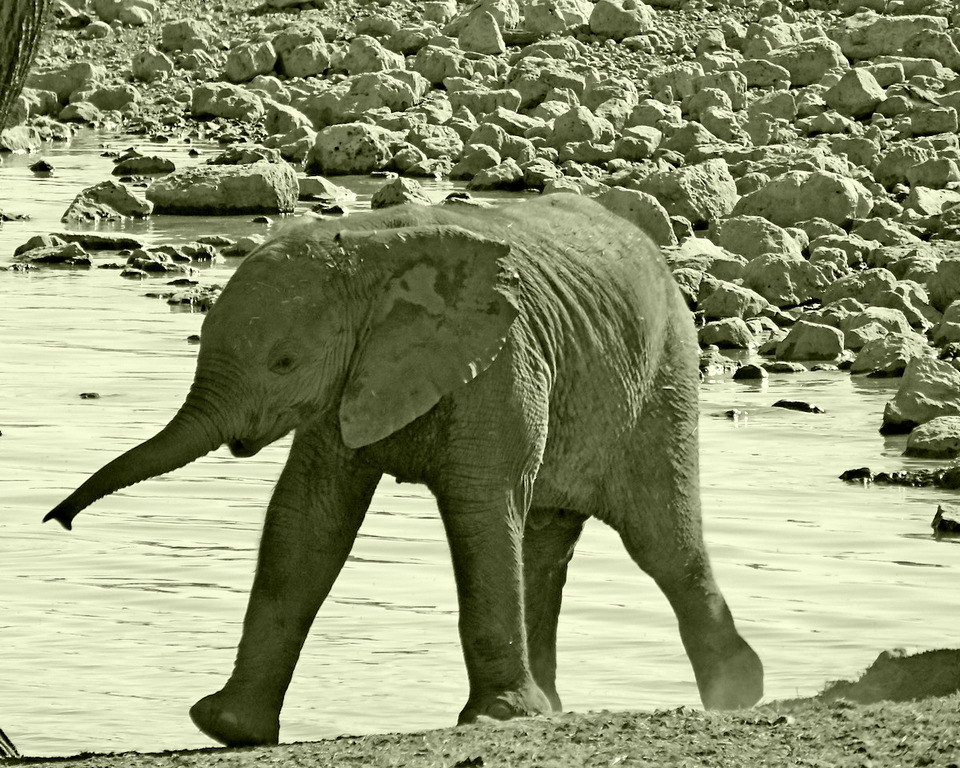 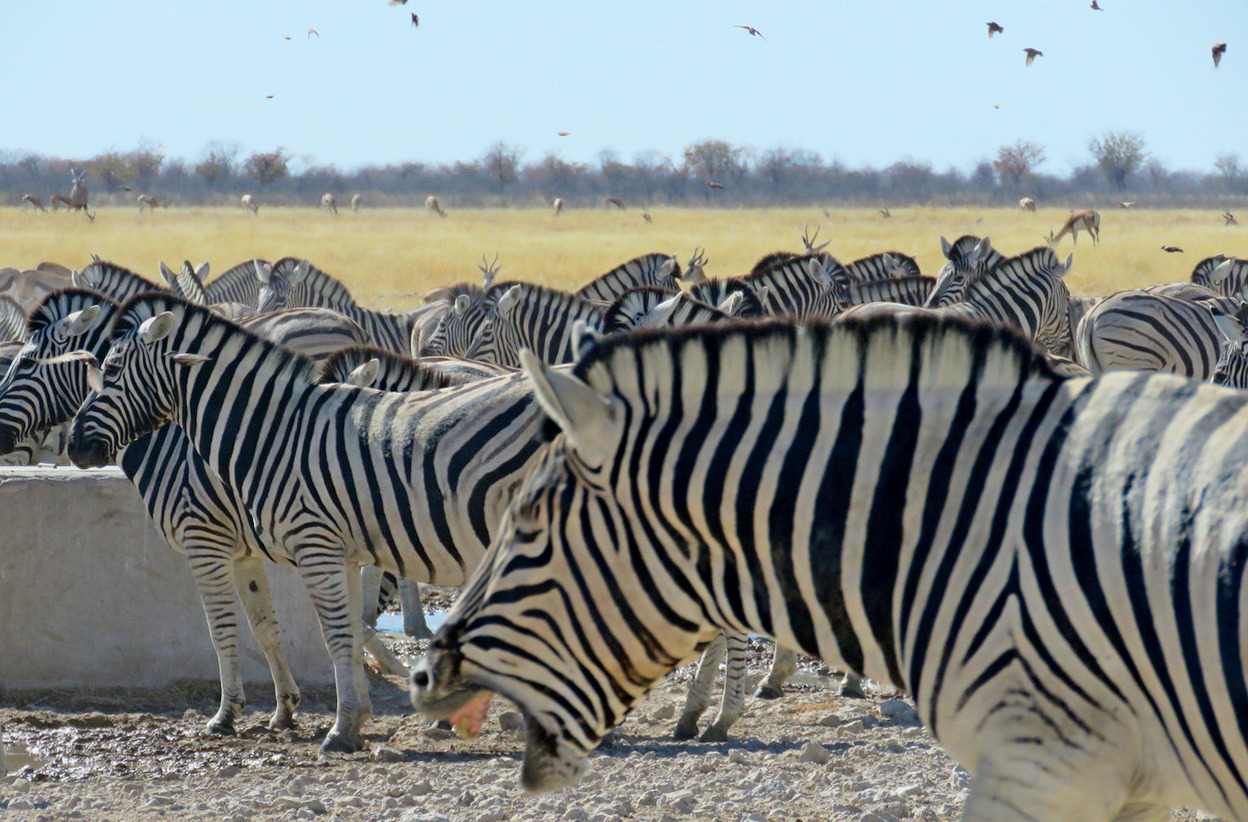 This time around the zebra herds were simply enormous. They were absolutely everywhere in great migratory-size numbers, braying and sparring and pushing and shoving. Recent prolific rains in southern Namibia have definitely encouraged animals to mate and reproduce. (The north of Namibia, sadly, is still suffering from drought.)

Keith had a few close encounters of the uncomfortable kind … 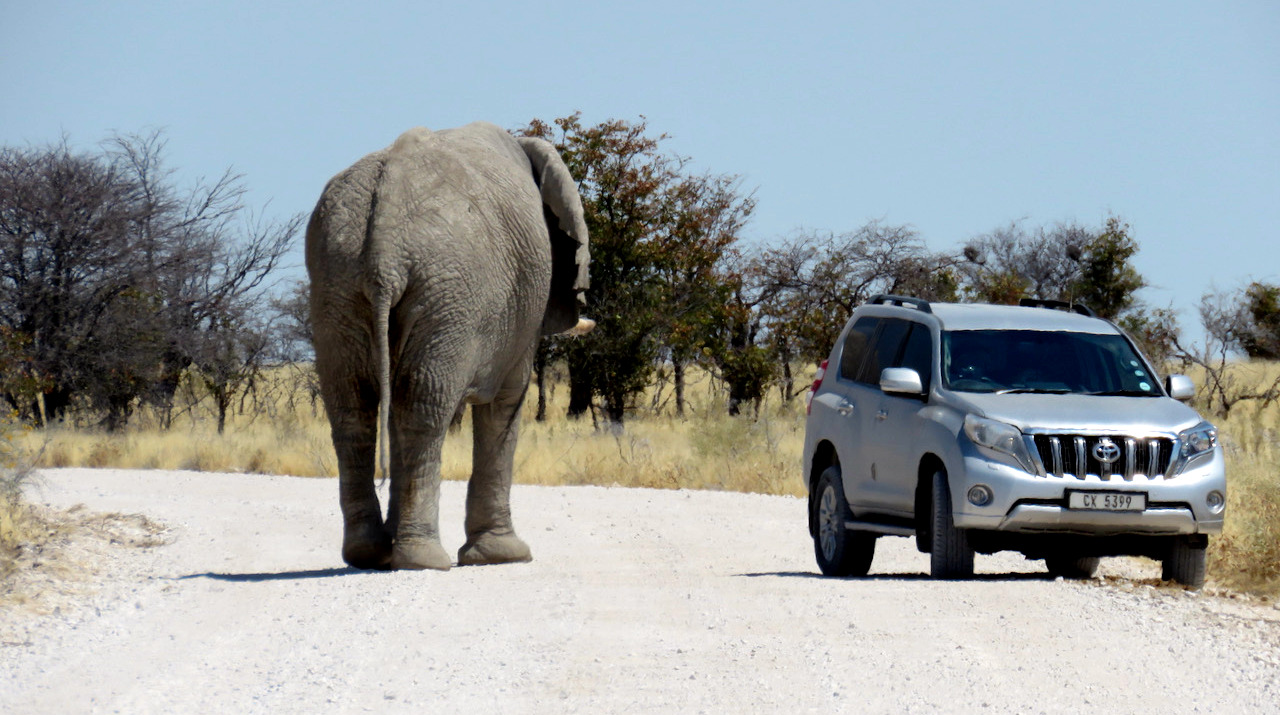 At this point, we know that Keith was not breathing. After a long and slow close-inspection, the bull elephant decided that a silver Toyota Prado wasn’t so much of a threat after all. He ambled slowly and most relaxedly by. 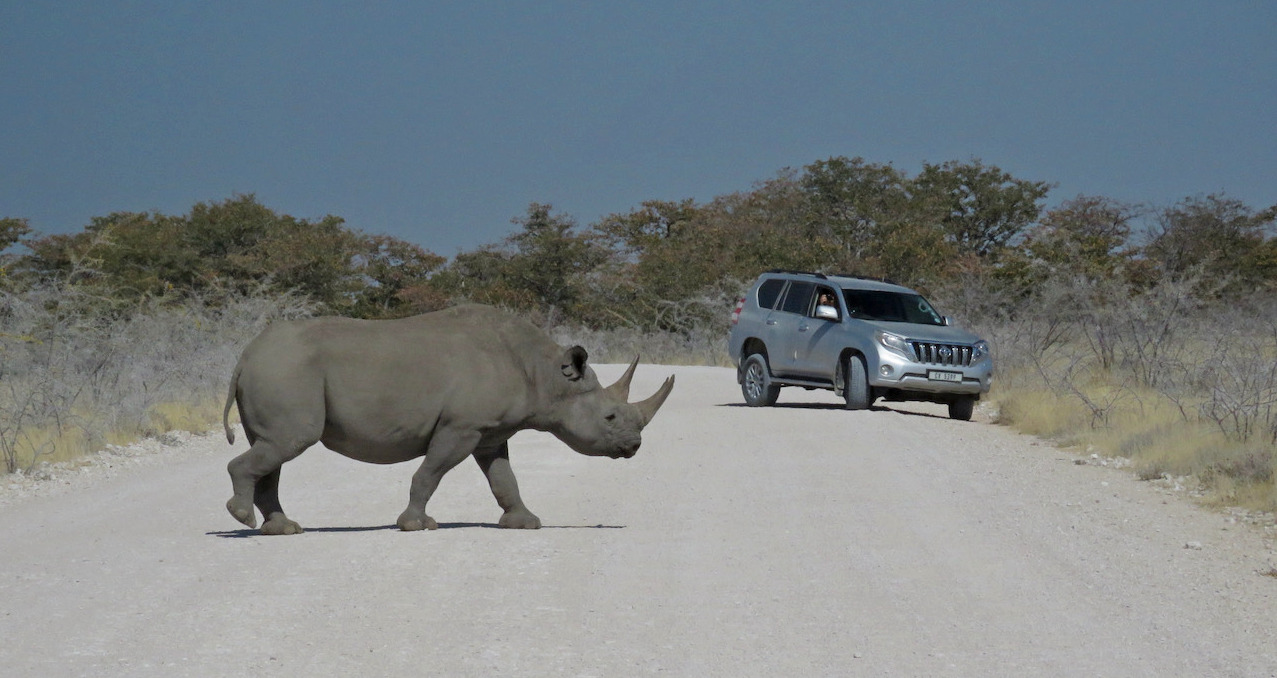 This encounter wasn’t so much of a threat but was mightily exciting, all the same … 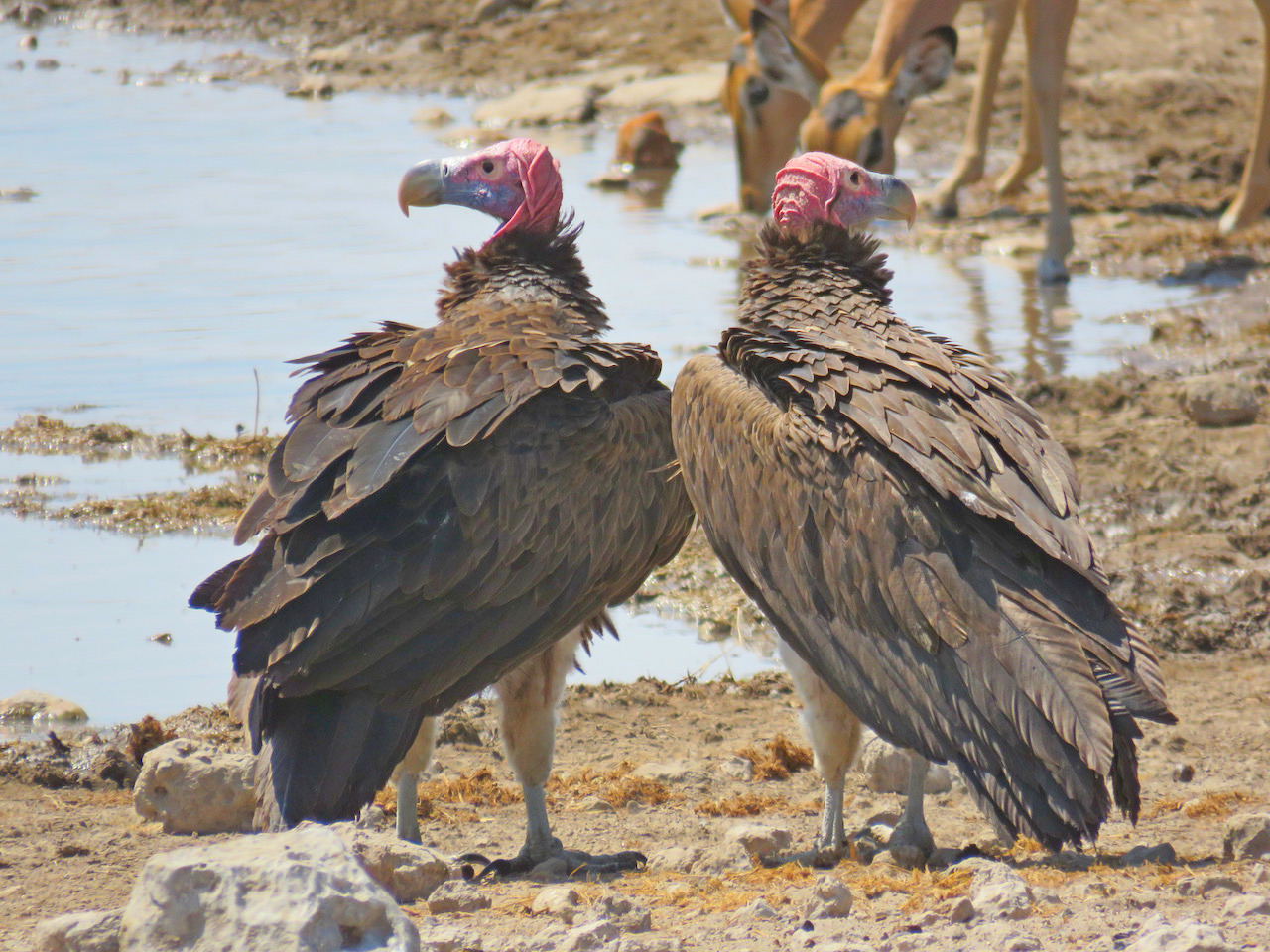 Brilliant photo by Hirsh (actually, all photos are by Hirsh!) of a pair of Lappet-faced Vultures during a drive around Etosha’s massive salt pan. Etosha has a selection of different vulture species; the White-backed Vultures sitting on their scruffy nests on the top of camel thorn trees are unmistakable. 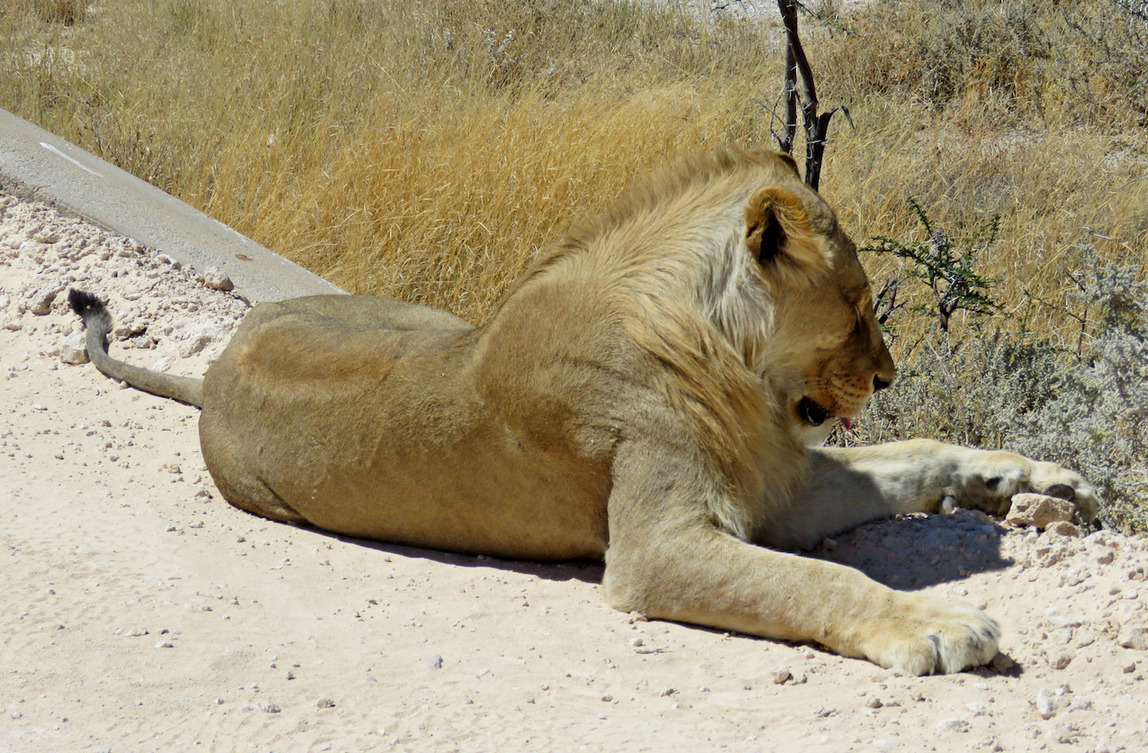 The thing about Etosha is that you can also drive around for hours and hours and not see a thing (same as Kgalagadi, and even Addo Elephant NP!). But then, just as you give up and are heading for home, Boom! there lies an adolescent male lion snoozing right beside you at the edge of the road. It makes up for EVERYTHING. And that’s the magic of the wild, isn’t it? The hold-your-breath anticipation. You might, or you just might not, see something of consequence. 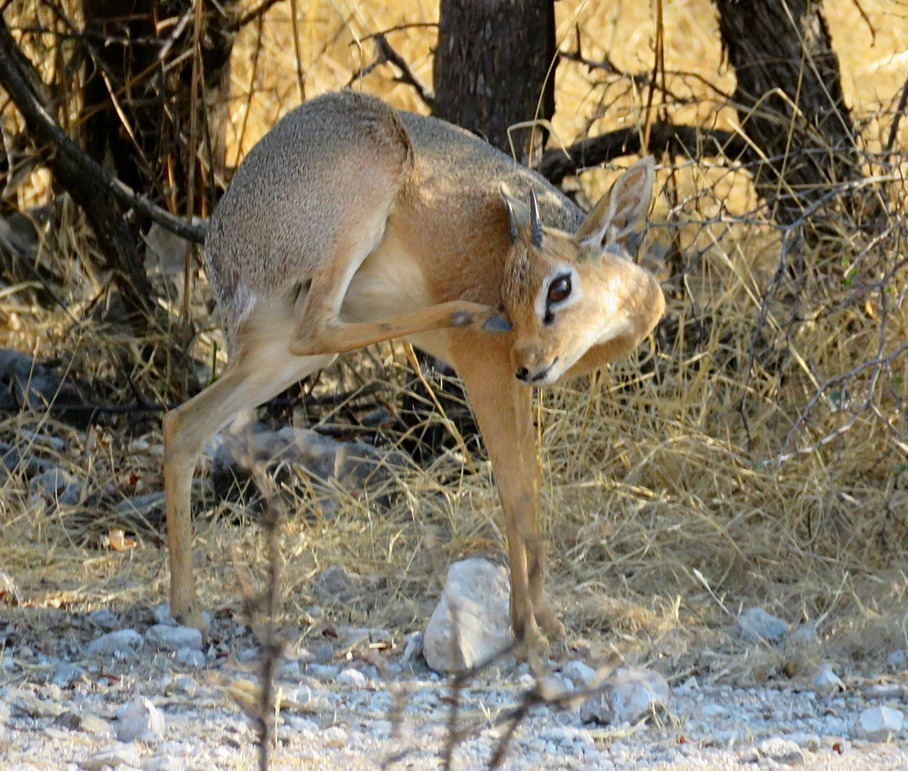 There are the small creatures, like this cutesy Damara Dik-dik, which is NOT that easy to find! But we ended up seeing little groups on many different occasions. 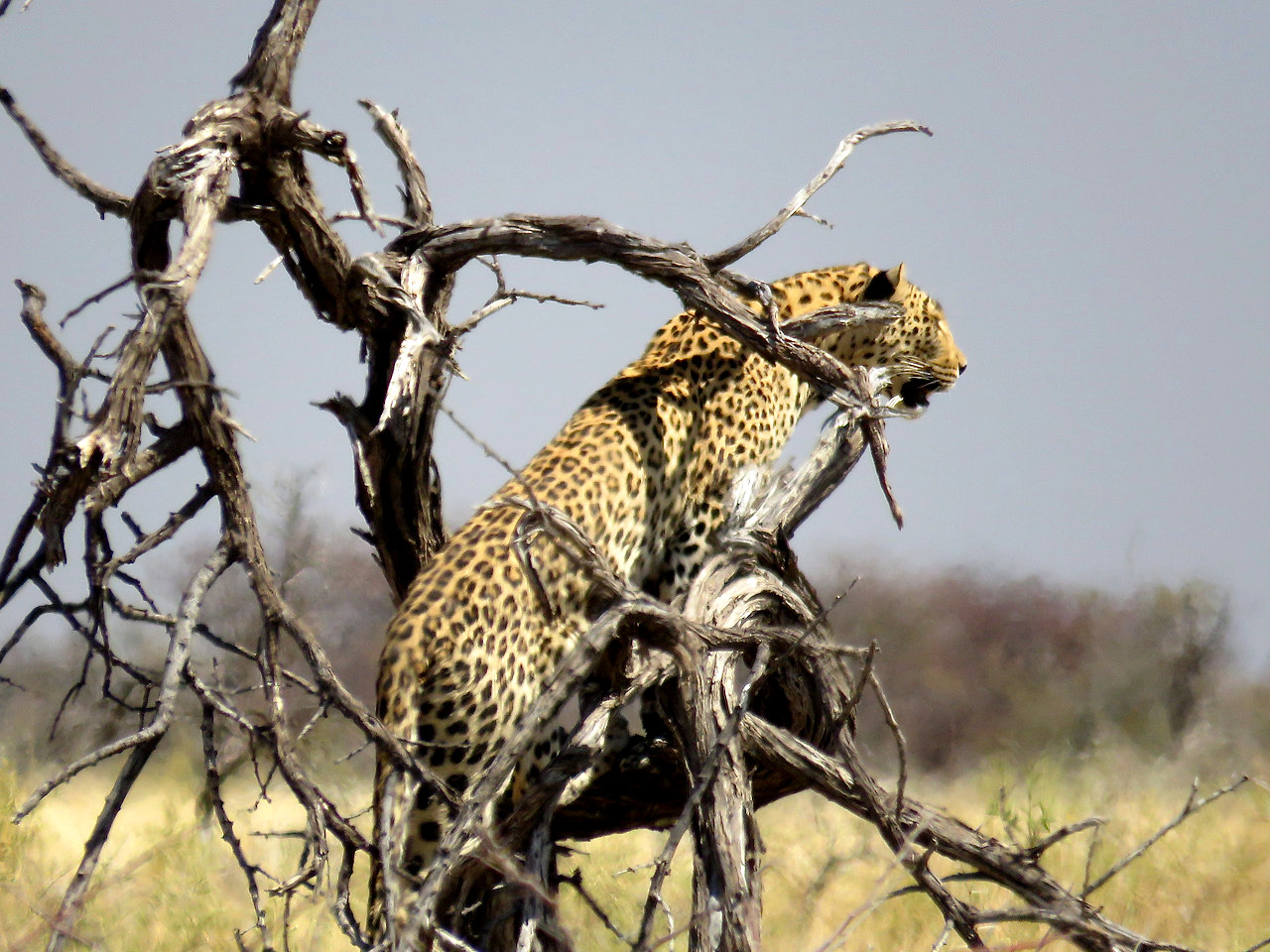 And then there are the UNFORGETTABLE sights, like a leopard climbing a dead stump at 12:00 noon in a 30-degree-celcius heat haze! You can see he/she is breathing heavily in the heat, and shortly after this photo was taken, the leopard climbed down and slunk off into the grasses. It was the highlight of our trip.

And, just for fun, I end off with a zebra photo that’s been doctored using an oil painting effect. Those stripes are so dazzling they’re as good as a painting. 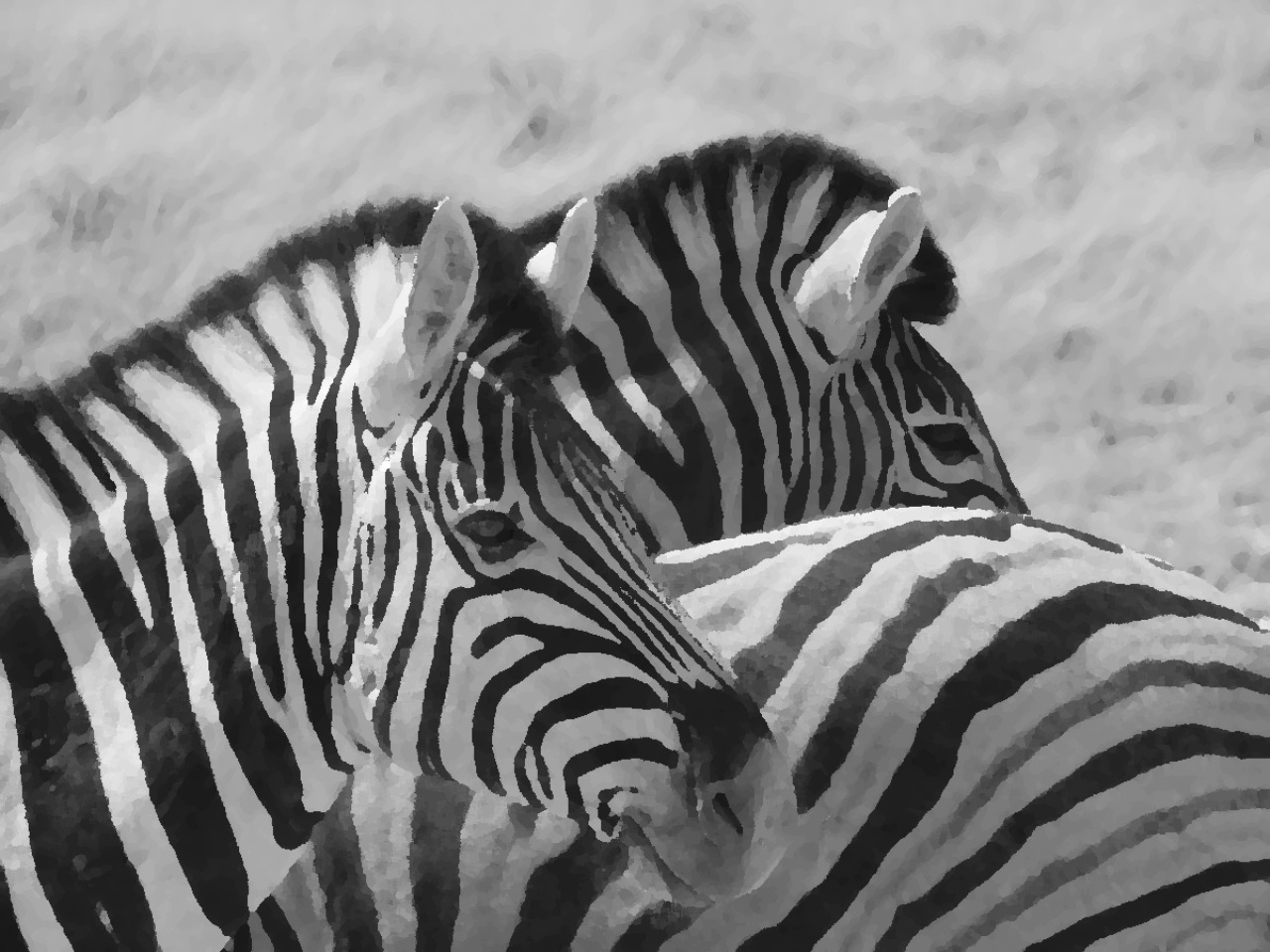 I also have a blog, Quirky Girl Traveller here